Collector or Bargain-Hunter? There are Craigslist deals out there.

If you’re like me and have a liking for vintage electronics, you’ll know that they turn up in a lot of places. Craigslist tends to be a pretty good spot for radios and even piles of tubes from time to time, but vintage test equipment is a bit harder to find. Occasionally, though, you’ll find something really special like this old Tektronix 519 microwave oscilloscope on Craigslist – and for free, too!

An old tektronics type 519 oscilloscope from 1960s. I don’t have a power cord that fits the plug to test it. No other accessories. Its very big and heavy, you’ll need a car and a couple of strong people to pick it up.

Big and heavy indeed! The Tek 519 was an engineering marvel at the time it was released in 1961 and it stayed in production until 1973.

Coming out at a time when companies like HP were just getting up to the “kilomegacycles” ranges through sampling techniques, or harmonic pre-selectors to shift GHz signals down to the ranges of conventional oscilloscope bandwidths of the time, the Tek 519 was a brute-force, direct-measurement instrument. It wasn’t suitable for most everyday usage (a weird 125-Ohm input with a proprietary connector, and fixed vertical sensitivity of 10V/cm) but if you needed an instrument that would display a GHz signal in real-time, this was the one for you.

It took some hefty power to make it all work, of course. The Tek 519 scope weighed 99 lbs. and uses a whopping 650W to get the job done, a large portion of that powering the 4CX250 horizontal sweep tube (more often found in transmitters and similar) which had to respond incredibly quickly to signals, and a 24,000V CRT voltage. It wasn’t possible to locate a catalog price for this rare instrument, but when new, it could easily have cost as much as a house.

Just goes to show you that, if you’re paying attention, you might find a good deal on something interesting! This particular one is reportedly going to pass through several hands on its way to a Tektronix collector in Germany.

Closer to home, I picked up my Tektronix 575 Mod 122C  Curve Tracer on my local Craigslist, for a pretty good deal but not free unfortunately, back last August. These are also pretty rare. The Mod 122C extends the collector and base voltages which makes it, with the addition of a stabilized power supply for screen voltages and a negative-step amplifier, suitable for curve tracing both transistors and vacuum tubes. 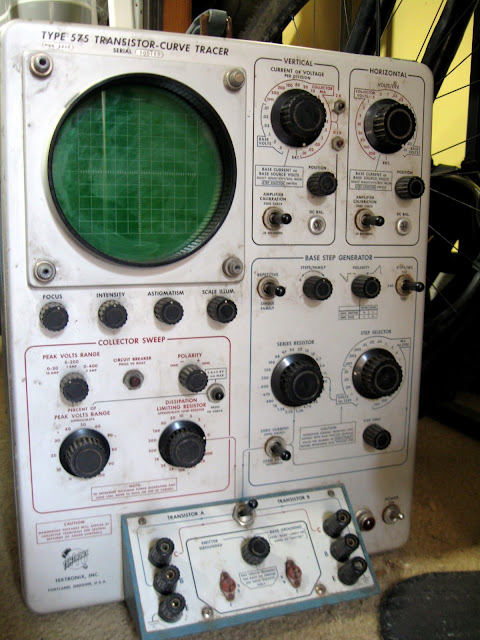 It saw a pretty hard life, apparently. A bit of rust inside, and nearly all of the tubes were cracked in their sockets which made removing their shells more interesting than I planned for.

Fortunately, I have a full set of tubes from a scrapped parts unit curve tracer, so it shouldn’t be too bad. These use 36 tubes, plus the CRT, and two transistors.

Ever find anything good on your local Craigslist?

7 Responses to Collector or Bargain-Hunter? There are Craigslist deals out there.