I was lucky enough to find a very rare, high-end radio for sale on Craigslist and jumped on it as quickly as I could. This particular one is the 1934/35 General Electric model M-125, their highest end offering for that year. And it’s both visually and electrically very impressive. 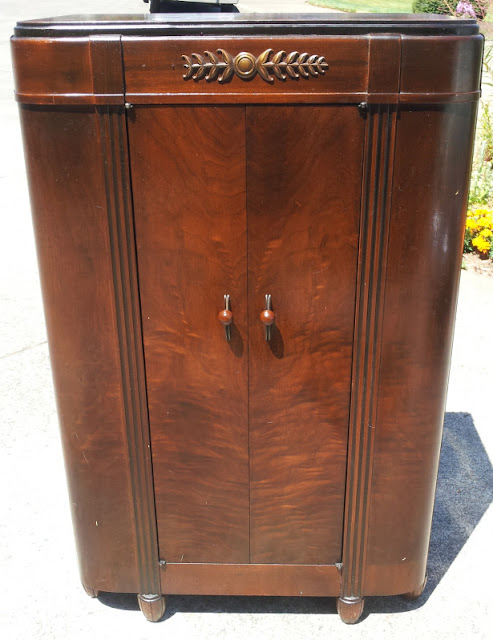 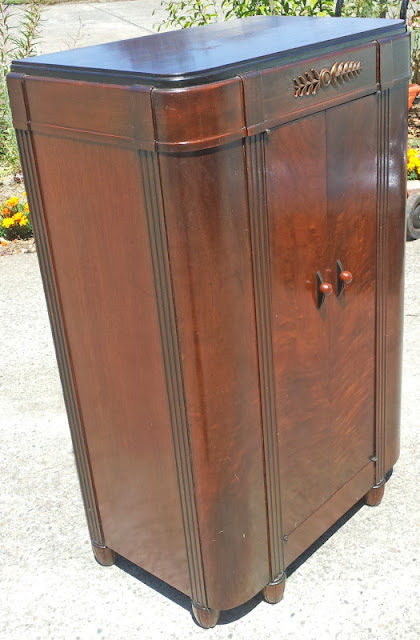 It’s in a stately (and very heavy) burled walnut cabinet with closeable front doors to hide the controls, and the small feet common to the mid-’30s console radio styling. It’s just as impressive with the front opened up: 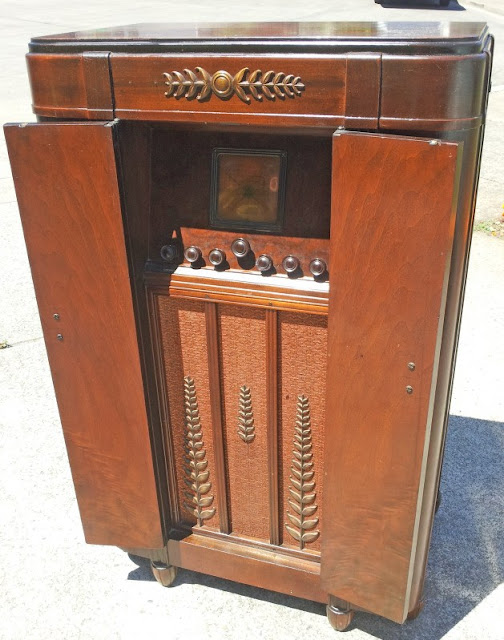 Inside there are a total of 7 control knobs: Sensitivity, Volume, Treble, Tuning, Bass, On/Off, and Band Switch. On these old radios, more knobs means a higher-end radio with a more complex circuit and there aren’t many other radios with this variety. Some of the complicated McMurdo / Silver and Scott radios have similarly complex control schemes, but it’s quite rare to find surviving examples of such high-end pieces. 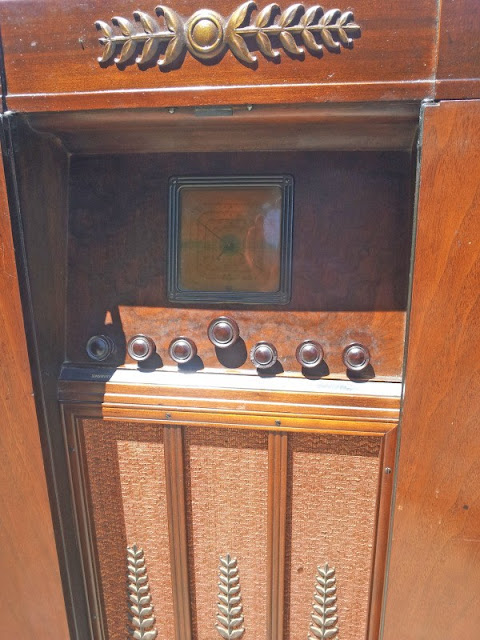 The radio uses the square “clock dial” face, with a large double-sided pointer to indicate tuning position and a smaller sweep second hand in the center for fine tuning. Tune the main knob to approximately the right frequency, then fine-tune with the second hand and mark the position in your log for next time to perfectly tune in the station. A couple of trim pieces are gone on this radio, but they should be able to be replaced or refreshed with new ones without too much trouble – everything else is complete. 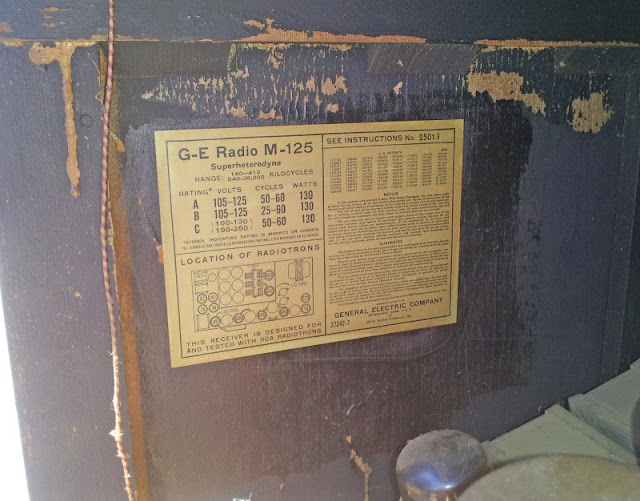 Electrically, the radio is the same as the RCA 281 – they share the same chassis, but with a different cabinet and dial face design. This radio is a 12-tube receiver with a tuned RF stage, separate oscillator, two IF stages, and push-pull drivers (76) coupled two a pair of push-pull 42s for ~10W of audio output. It can receive the AM Broadcast Band, the Long-Wave band (<375 KHz, not much broadcast there anymore) and AM Shortwave stations up into the high reaches of the VHF band. 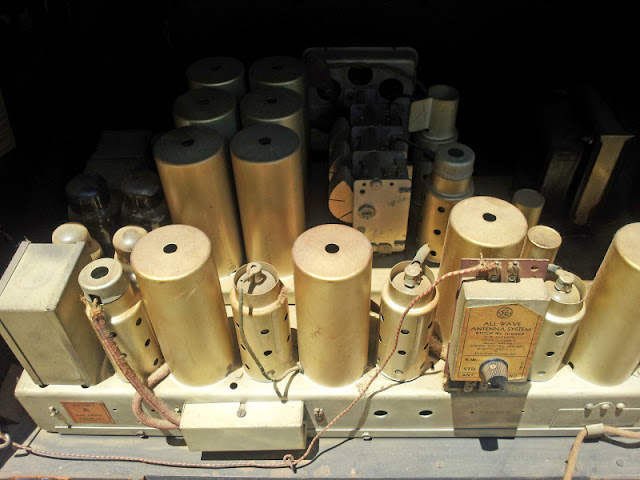 All the tubes are present, although it’s missing grid cap shields on 3 of the tubes in the back – although this is more cosmetic than functional – and all the labels are also in excellent shape. 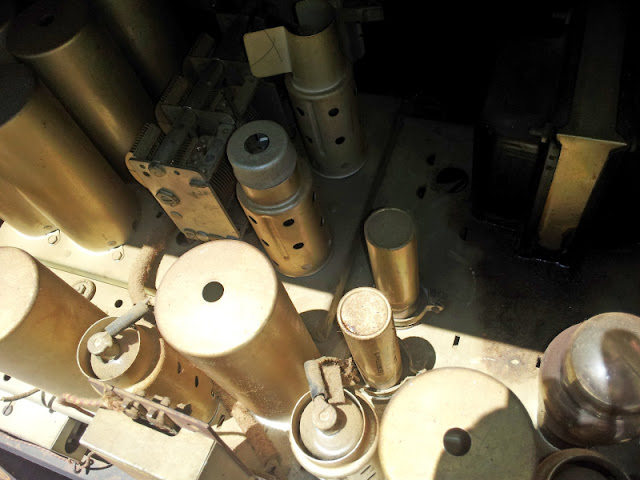 Unfortunately, as you can see in the top right of this photo (somewhat in the shadow), the power transformer on this radio is toast. It’s spit out its tar from the bottom. Someone during this radio’s life plugged it in before repairing it electrically and it suffered catastrophic electrical damage. I’m lucky that I have a large stock of transformers lying around, but I will have to dig them out of the depths of storage and a transformer replacement is never a small job. 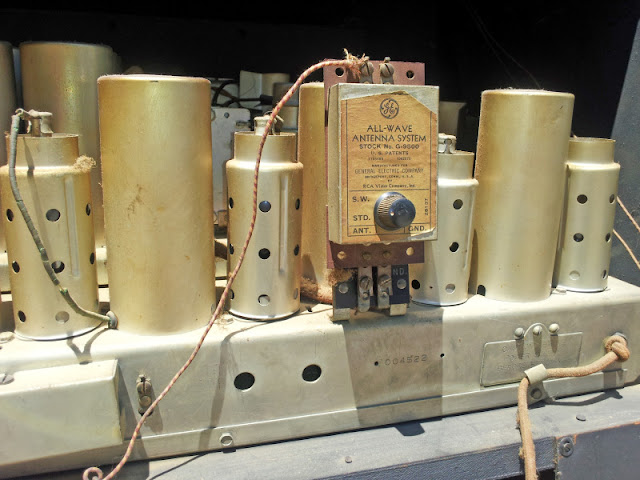 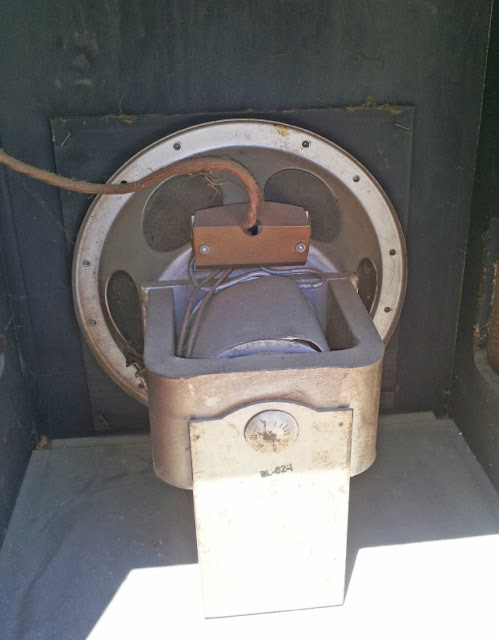 With the transformer gone, and the speaker field coil used in the power supply circuit, I hope the speaker isn’t also damaged – but I do have a suitable replacement or two lying around if necessary. 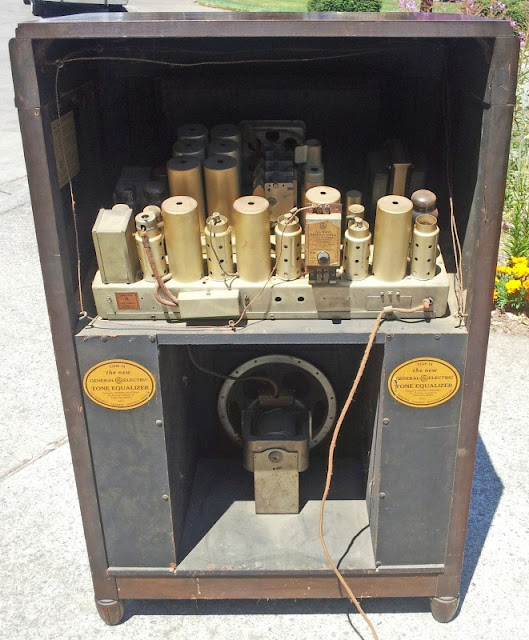 One interesting choice is in the huge cabinet, why they went with a small 10″ speaker design. The Tone Equalizer cabinets on the sides are resonant chambers which will help with fidelity a bit, an early nod towards evolving hi-fi designs, but for such a high-end piece the audio seems a bit under powered.

I’m very much looking forward to starting work on this radio next month. It will likely be a several part series, as there are a few big jobs to deal with – transformer replacement, recap, and alignment. Stay tuned!