The RTLSDR is designed for higher frequency operation, so if you’d like your RTLSDR to be able to access many of the amateur, short, medium and longwave bands you’re going to need an upconverter. There are quite a few choices for an HF converter / up-converter are now available to shift signals into the tuner’s frequency range. These range from schematics up through built boards, and will cost you between about $25-75 depending on features.

If you’re new to RTLSDR, the Hobbyist’s Guide to the RTL-SDR can help you get off the ground with tips and tutorials, and learning how to use the software that goes along with it for a number of fun projects. You’ll need an antenna, too; there’s a great e-book on Antenna Basics to help you get started matching an appropriate antenna to your RTLSDR – or step up to the ARRL’s Antenna Book for a much more detailed look.

Need a dongle to go with your upconverter? They’re around $11 to start.  The base model has a fair amount of frequency drift (some users have reported 6ppm – 78ppm, depending on the specific dongle). This can be a problem for sensitive and narrow-band applications, but there are way more stable options for only a little more money, like a 1ppm TCXO oscillator

model with SMA connectors for only $25, or an even better 0.5 ppm model in a shielded enclosure for around $60 for the best performance. I own the 0.5 ppm model, it’s great!

1. Probably the most popular and complete converter out there today is the NooElec Ham It Up v1.3 which has a large amount of documentation including layouts, and can be purchased assembled and ready to go for only $55. It features a bypass switch and the optional hardware noise source is an interesting, if possibly seldom used, feature. Ham Radio Science has a rather extensive review of the original revision and were pretty happy with it. There’s also an excellent W2AEW video illustrating the operation of the dongle and the filters on the various RF paths.

NooElec also has an optional Extruded Aluminum Enclosure Kit  for the Ham It Up which provides helpful shielding and a very polished look for just a few dollars more. Get both and it’s a high end product for under $100. There’s enough room in the case to mount the tuner dongle and maybe a low noise amplifier, too.

2. Low-cost integrated units have recently become available. These started showing up on Alibaba and eBay from Chinese sellers a year or two ago, but were often difficult to get your hands on. Now, they’re widely available and ship from within the USA. Often found under several different brand names, this particular Usmile receiver contains a 100 MHz upconverter and RTLSDR receiver in a single shielded enclosure, with a switch to select direct or upconverted input, offering full coverage from 100 kHz – 1.7 GHz. Decent looking package has a block diagram of the inner workings printed on the side, too. Starting at around $90, not a bad deal!

3. CT1FFU v5  HF converter is a brand new iteration of the long-standing design which was originally one of the first released. This model features an improved smaller PCB size, improved filtering and am improved ring mixer, and phantom power to eliminate a power cable when attached to certain compatible RTLSDR receivers. The LO is still 65.520MHz or 106.250MHz which might interfere with an FM Broadcast band in some countries, such as the U.S., but there is some filtering incorporated to eliminate that. The price is reduced to 55 Euro shipped worldwide with tracking.

4. JA7TDO has produced the Soft66RTL, including an RTL2383u+R820T and an HF converter with a 50MHz local oscillator frequency in what looks to be a nice, 3D-printed case capable of receiving up to 30MHz, or 50MHz and above bypassing the converter.

5. BA5SBA in Hong Kong is now selling an RTLSDR and Upconverter package in nice looking metal housing with a built-in switchable upconverter and what looks like a stock antenna that might actually be useful. It looks to use a 40 MHz crystal for up-conversion based on the specs. It’s also cheaper than I’d have thought, and has free shipping from Hong Kong. Available here on eBay from kuyaya520’s store.

6. From the UK, SDR(X) allows full-range reception with a new upconverter with specialized pre-filters (0-2, 2-6, 6-11 and 11-30 MHz) or a single 30MHz low-pass filter. The cost includes the up-converter hardware and an RTL-SDR dongle. This would be a great choice for EU residents! SDR(X) from VC Vintage Components.

7. If you’re looking for a more rugged commercial solution, High Sierra Microwave has an upconverter (FCD-1-55-UC) with a 133MHz LO frequency and BNC terminals with an integral amplifier. I’m a fan of converters whose LO frequency shifts the entire HF range above the FM broadcast band in general and the shielded enclosure will definitely cut down on noise. Looks like it’s suitable for mounting outside at your antenna’s feed point, and it also looks like you’re going to pay for those features. I’d love to evaluate one of these if I could get my hands on one. 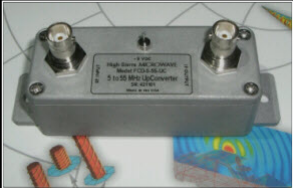 8. W9RAN developed a RANverter kit which was featured in the January 2013 issue of QST magazine, using a 125MHz local oscillator. It’s gotten a lot of great buzz on the Internet and offers good performance and even a little bit of conversion gain through the mixer. No materials available on the Internet for it, sadly. 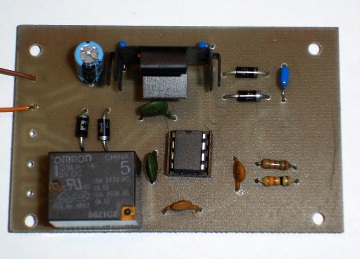 9. If you’re comfortable speaking  Dutch, or just with Google Translate, you can buy the Kit RF Converter for RTL SDR Sticks DC – 65 MHz. Unlike most other models, this one HF up-converter takes a BNC 50 Ohm antenna input and has an SMA 50 Ohm output with a 100 MHz oscillator frequency and built-in protection. This one also looks like a great starter kit with through-hole components and large coils and looks easy to build. You can also purchase the completed assembled kit in an enclosure, which also includes a power cable and SMA-MCX adapter cable. Looks interesting.

10. Kalle over at DGK Electronics has a great looking compact 100MHz HF converter designed to fit inside of a pre-made RF shielding box. It uses the ADE-1 mixer and an ASEM oscillator. It has some of the most complex filters and great filtering on the incoming power line, it probably performs very well. He describes the filters on his page, and there’s also a full schematic available. There’s a photo of a pile of boards, and he says there’s still some available, one might be left! DGK Electronics 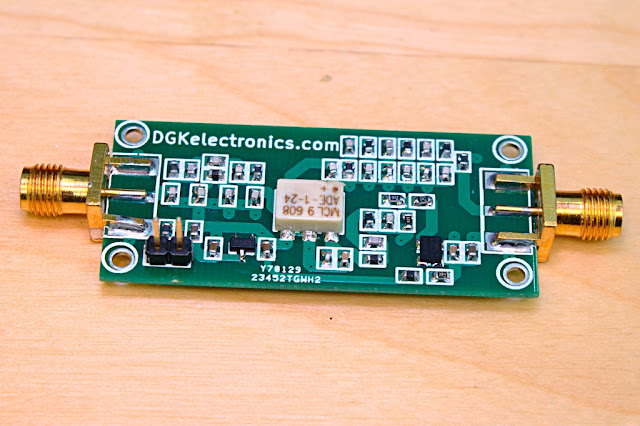 11. David Forsman, WA7JHZ, sent me a photo and plans of his 125MHz HF up-converter with a diode limiter, attenuator, and amplifier all in one from plans featured in Jan ’13 QST magazine. Click through there to the article for a schematic and explanation for more details and a full schematic. Thanks, David! 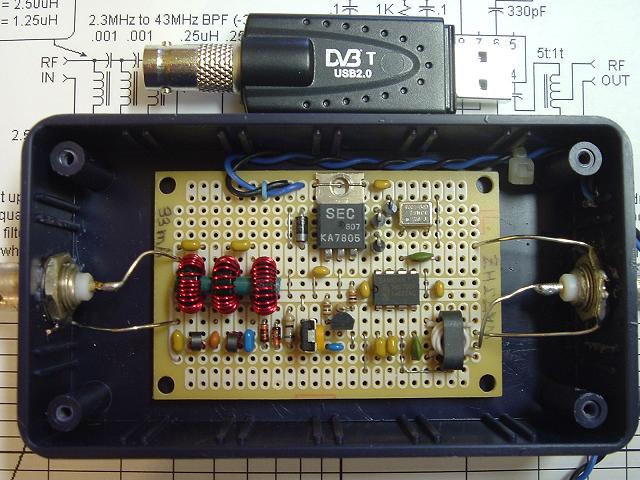 12. Matt Dawson GW0VNR has a very interesting HF converter using more discrete parts than some of the other ones I’ve seen. It uses hand-wound transformers, an actual discrete diode mixer, and a Saronix oscillator running at 106.25 MHz. It uses a total of 23 parts and looks like it would be pretty easy to build. He doesn’t have any photos of the completed board, but does have a full schematic, overlay, transfer mask and Gerber files for the PCB. I’m pretty sure I have all the parts to build this one in my box as well. It looks interesting and simple. Check it out. 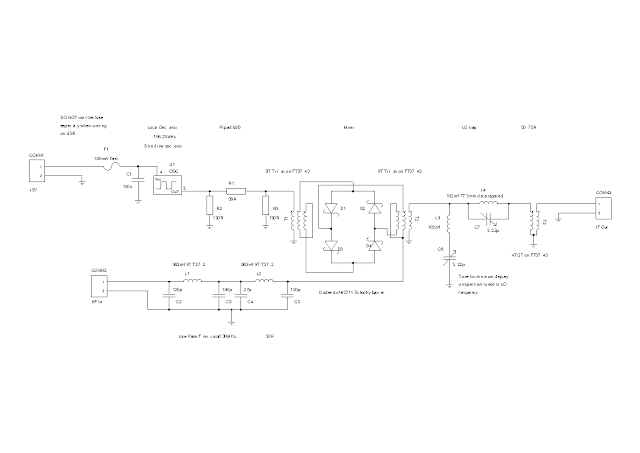 13.  Cross Country Wireless produces a nice looking up-converter which was reviewed in the August 2014 issue of Radio User magazine. It looks like a pretty minimalist design without a lot to go wrong, and solid build quality. Available shipping from the UK, this most recent revision includes an antenna isolation transformer to protect against damaging spikes and transients and uses a 125 MHz local oscillator to ensure no FM Broadcast interference. 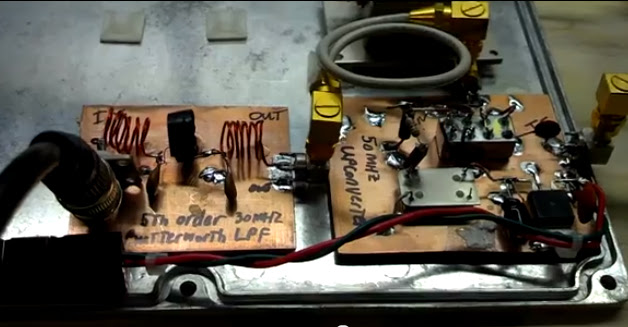 15 Romanian amateur Alexandru YO2LDK built a simple HF upconverter circuit using an NE602. This has an amplifier, limiter, regulated supply and 100MHz frequency like several of the ones pictured, but the circuit itself looks quite different. The amplifier stage is ahead of the limiter, which looks like this one is offering a constant gain versus the adjustable gain some of the others have offered. It looks like this one has more tunable components, which means a little more work to dial it in. I didn’t see any photos of the completed product. 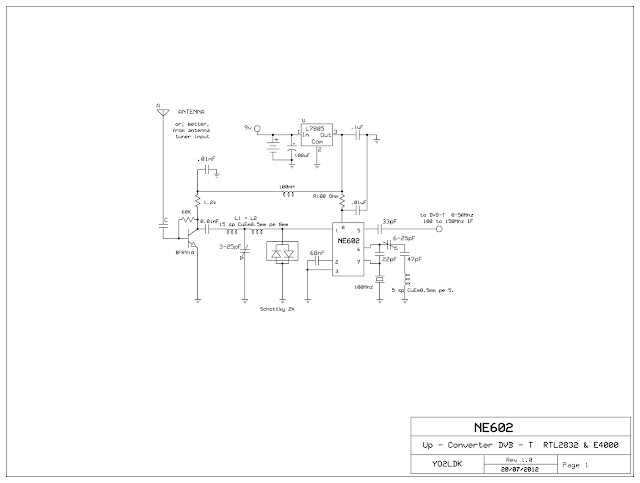 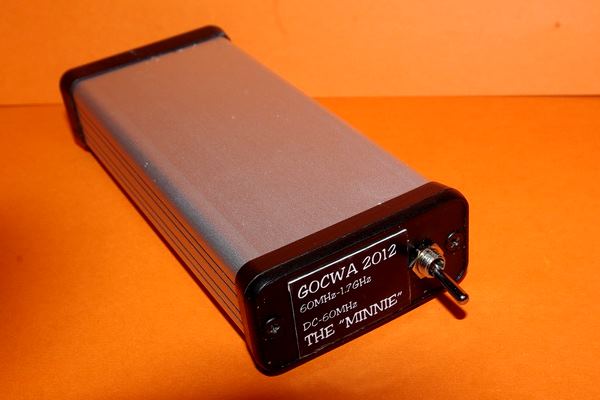 18. German amateur radio club Ortsverband Husum M04 has an SDR-Konverter with a very nice looking enclosure designed around the familiar NE602 mixer. The page is in German, but it looks like a quality product!

19. From the comments, I’ve learned about the SV1AFN Design Lab’s DC-55MHz upconverter for an RTL-SDR receiver. It features selectable bypass, selectable LNA featuring about 20 dB of gain from parallel Mini-Circuits Gali-74+ amplifiers, and a design with excellent filtration on the input and local oscillators to reduce harmonics and interference, it should be a very good performing upconverter-amplifier. It’s a kit with SMD parts pre-soldered; you wind a few transformers and connectors or you can purchase it assembled.

20. TT RF Tech over in Japan has a great looking little converter board. You’ll want to use Google Translate as the page is in Japanese, but he’s distributed hundreds of these kids to Japanese amateurs and it looks like it’s got solid filtering and quality components. This one is also based on the commonly used ADE mixer which turns up in a lot of these RTLSDR projects. Looks like a quality build and is available on Amazon for Y 6,800.00.

21. Dutch amateur ON1BES developed a very nice looking upconverter with switchable HF and VHF inputs. He’s included a lot of material – component listings, schematics, simulations of the filters, board masks, band plans…just about everything you could possibly want to build your own. Some experience reading Dutch is required, however.

22. UK hobbyist site CosyCave sells a Budget HF Converter with a 50 MHz LO frequency for R820T, FC0012 and FC0013 dongles. The 50 MHz LO is below the tuning range of the E4000, so it won’t work with the older dongles. It’s an extremely minimalist design – a crystal, mixer, and a small handful of passives for filtering. It’s powered by USB and has a pair of SMA connectors. I’m not sure I’d recommend it for U.S. use, though, due to the LO frequency and the filtering. Looks like a nice little design, though, given the limitations! The price is right, too, at just £9.95.

With these choices, there are plenty of options for getting HF signals into the VHF ranges for use with the RTLSDR. It’s not difficult to modify these plans for even higher fidelity and accuracy, such as by increasing filtering on the power lines, building a shielded enclosure, improved antenna systems, and more.

Personally. I’m using the NooElec 0.5ppm RTLSDR, with the Ham It Up upconverter in the NooElec shielded enclosure, with a separately purchased RFBay LNA. It works well in the city, and really shines when you string up an even longer antenna.

If you have a design you’d like to see featured here, let me know!

Edit 10/29/2012: NooElec offers “Ham It Up v1.0” upconverter which looks to be based on a different design, and seems very high quality.

Edit 9/2/2013: Updated to reflect availability of some items.