About a year ago, someone left a comment that really looked like spam on one of my pages advertising a web store selling tube audio gear and parts for guitar and audio amplifiers. Against everything I’ve ever learned about behaving on the Internet, and my better judgement, I ended up actually buying a kit from that vendor Mable Audio located in Shenzhen China. They have several kits available with a few options: 6V6 or EL84 for output, 6SL7 or 12AX7 for the input stage and also a beefier EL34/12AX7 amplifier for about double the price. They have a ton of components and guitar amplifier parts and kits as well.

I selected the 6V6/6SL7 kit because I like the larger tubes, and had a set of 1937-issue 6V6G tubes that look more interesting than the small GT-style tubes it came with. 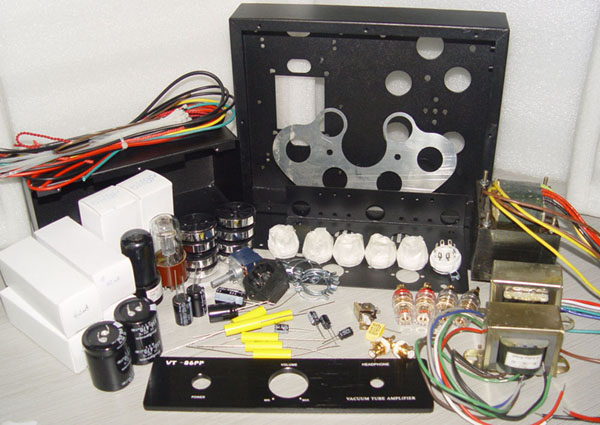 The kit arrived as a box of miscellaneous parts and the chassis. There was no particular documentation included, but the schematic was sent to me via e-mail. Also, the silver decorative plate (in the center of the photo) is no longer included in these kits despite being pictured, as I was told after I purchased. Not the end of the world, though. The kit included a large power transformer, two output transformers (23% Ultralinear), two huge 470uF 450V filter capacitors, all the needed tubes, signal capacitors, connectors, controls, high quality ceramic sockets and lengths of 600V-rated wire to assemble it all with. 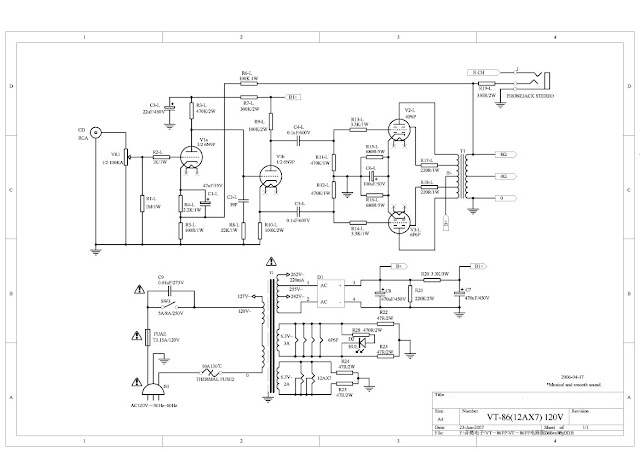 The amplifier itself has decent schematics, on paper anyway, although the output impedance is inaccurate on the datasheet: the datasheet, schematic, and transformer color code documents all specify multiple taps but the provided hardware only supports an 8-ohm speaker. This is acceptable, though, as most home theatre speakers are 8 ohm anyway.

Assembly wasn’t terrible, but the build quality of the chassis was marginal at best. The top surface of the chassis bolts to the chassis pan itself to hide mounting rails and dividers, and the holes on the top panel didn’t perfectly line up with the socket locations on the bottom panel. This meant that after mounting the sockets to the bottom where they belong the top cover wouldn’t slide over them because it was interfering by about 1mm on one of the sockets. It took significant pressure to force it on and made a very loud snapping noise when it did so, but the socket and cover were all intact. It’s definitely not coming off again, though. Additionally, the cover over the transformers is supposed to mount using several screws at the corners, but only two screw holes lined up. 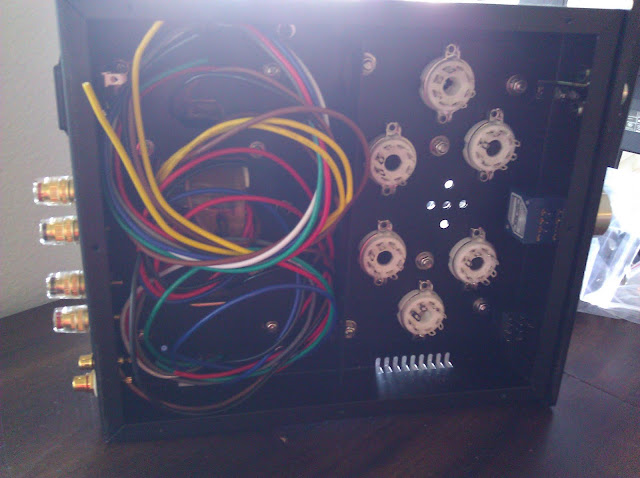 The sockets are ceramic and the sockets gold-plated, and the transformers look appropriately sized, though, so it’s on to building past mounting up the parts. This project was a long time in the making, as I mounted the sockets and chassis up on July 12th 2011 and then did no further work until March 2012. I worked my way through the schematic, roughly right to left. This amplifier is a power supply, and two identical amplifier channels. I’d highlight on the schematic as I completed both mirror halves, and this made it easy to keep track of where I was going. 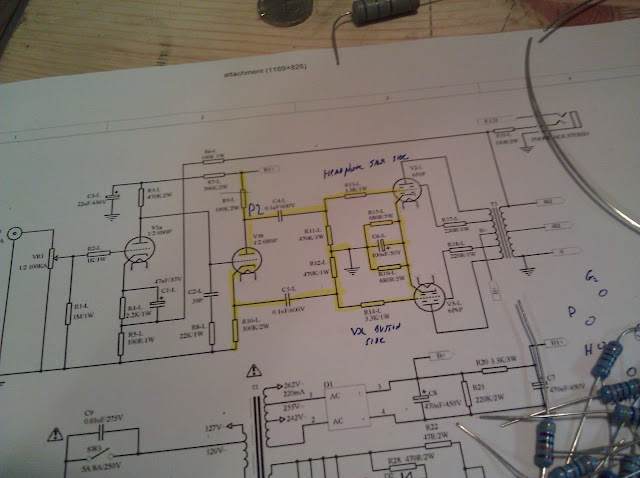 Some photos showing filling in the components: 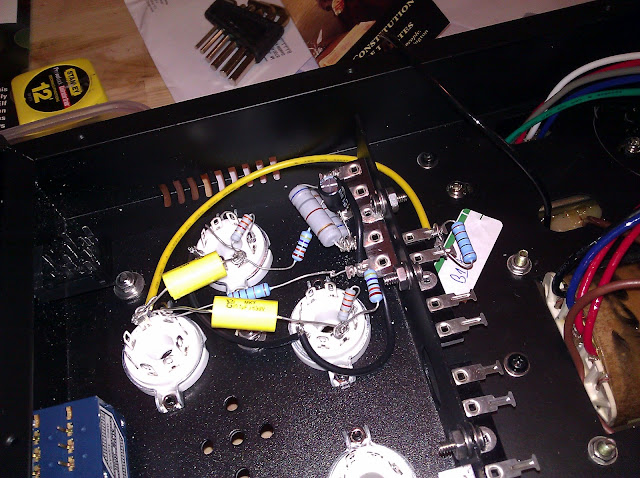 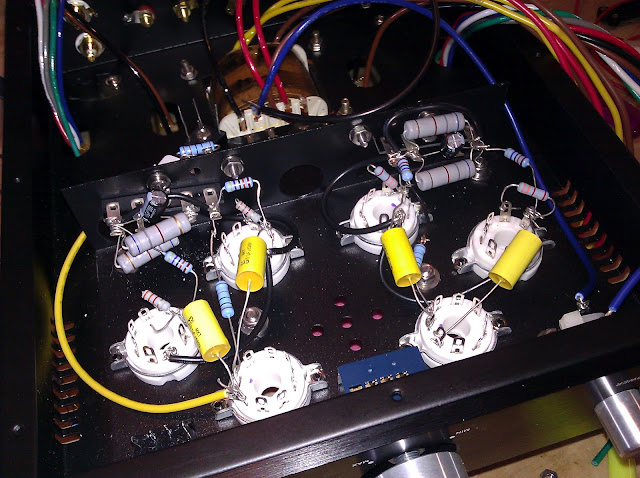 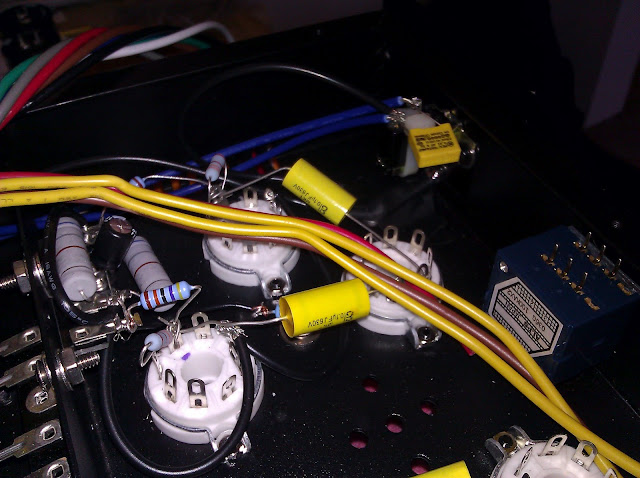 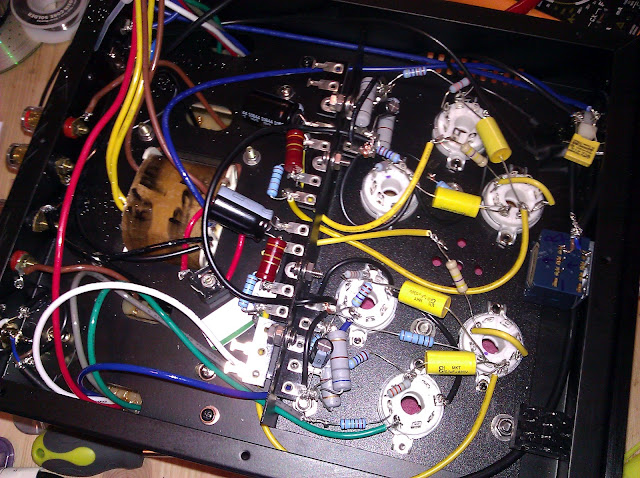 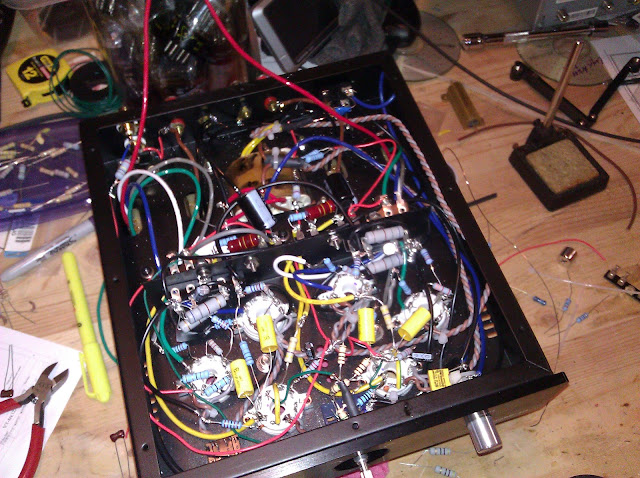 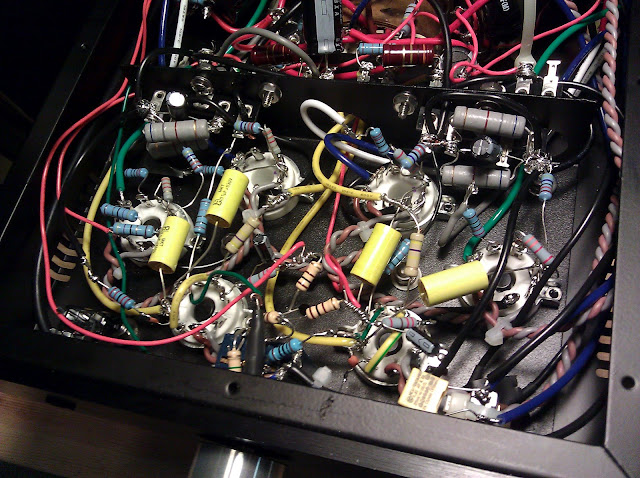 After assembly, I had a few left-over parts: 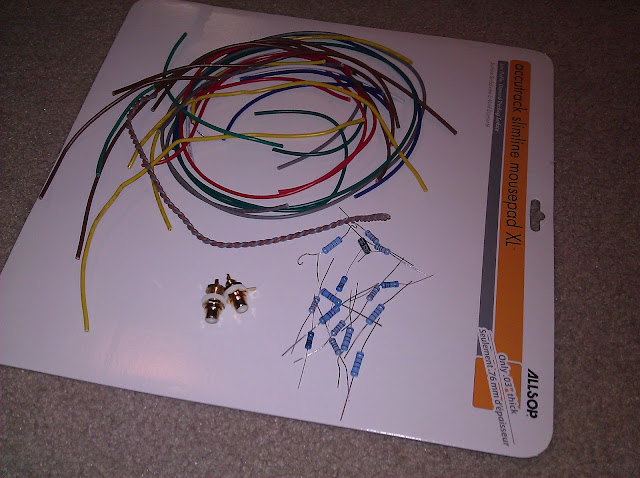 A really weird assortment of leftover parts at that. I declined to connect the headphone output (on advice that it was probably not safe for any headphones that I might actually like due to the connection – not unique to this amp, many other circuits have similar issues) which accounts for 2 of those resistors, but there’s still 13 more + a small capacitor that weren’t called for anywhere. And there are two extra panel-mount RCA input jacks. And a ton of extra wire. But for all the extra they did include, there were 4 resistor types (8 resistors total) that were not included, so it was a trip down to Vetco Electronics in Bellevue to pick up replacements. The replacements are the Red- and Tan- bodied resistors. Not quite sure what to make of that.

I elected to replace the LED power indicator with an NE-2A neon bulb instead, so it would be the same color as the glow of the tube heaters. 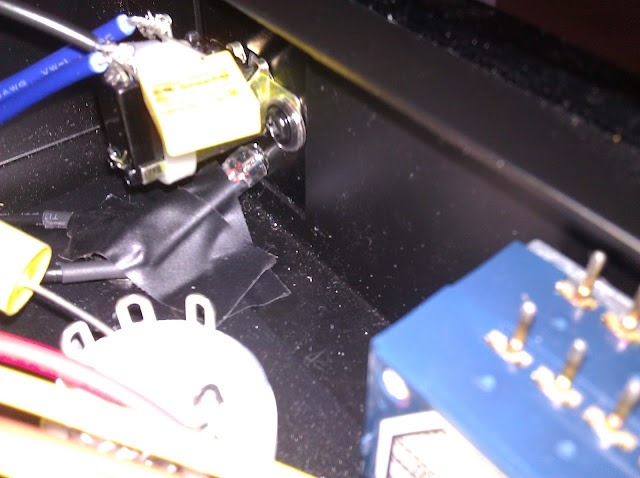 There is a minor issue with this one, though. There is an anti-arcing capacitor across the switch. I placed the NE-2A between the switched side of the switch and the AC neutral (it runs directly from AC mains through a 150K 1/4W resistor). With the switch turned off, the capacitor allows AC leakage of a few mA to pass to the cold side of the switch. The current leakage is less than the excitation current of the transformer, so the transformer appears “open” to the low signal as it’s entirely eaten because it’s not strong enough to set up a magnetic field. This causes the current through the 150K resistor and neon….so the bulb lights up when the power is off, now. With the power on, the capacitor is out of the circuit and the transformer is an extremely low impedance, so all the current goes through the transformer primary and none into the 150K resistor and the NE-2A bulb. The result? The power switch indicator is backwards. The light comes on when the device is turned off, and goes out when you turn it on. I intend to fix this at some point, but am not entirely sure what the best approach might be. The volume control itself is abysmally low quality, probably the only part in the kit I actually think is just plain “bad”. The return spring is weak and the switch touchy and it binds up easily.

There was also another issue: I wired the volume control backwards. “Right” is lower, now, instead of “Left” as is the convention. I evaluated fixing this problem, but while poking around one of the volume control’s pins started coming out of its molding and I didn’t want to risk destroying the control, so that’s a problem that won’t be fixed in this iteration.

I did a quick visual for obvious shorts and powered it up the first time with the 6P6P (Chinese 6V6GT) tubes which were included, as I didn’t want to risk my classic tubes. If there’s going to be a problem it’d be on first power up, for any amplifier from anywhere. The transformers all made a great *THUNK * noise when they energized for the first time, but quickly de-energized again. I poked around some more and found I’d missed a solder connection on the bridge rectifier. I soldered it back on and tried again and everything was fine! First power-up successful, with no re-work needed. 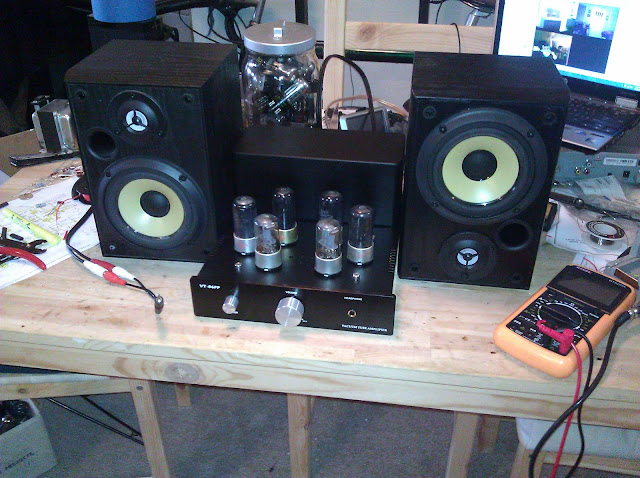 Then again on the test bench with the 6V6G tubes: 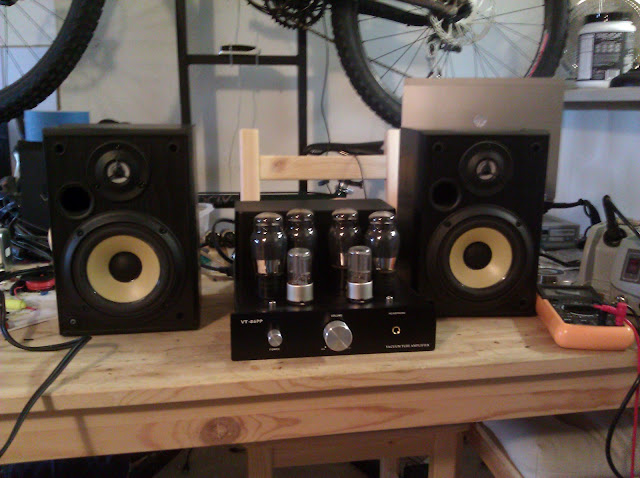 Still good! And for some post-production glamour shots: 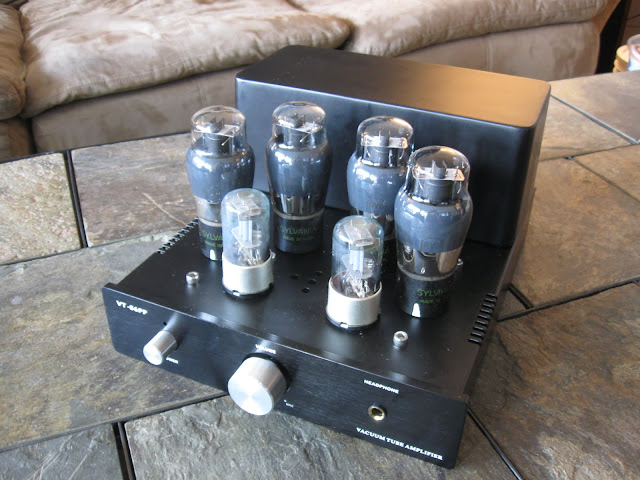 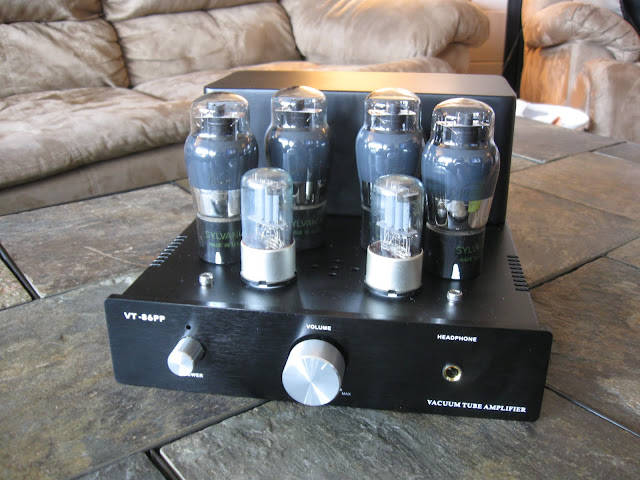 Now, I’ve moved the amplifier onto my desk and will use it for personal stereo when not using the Surround Sound receiver. 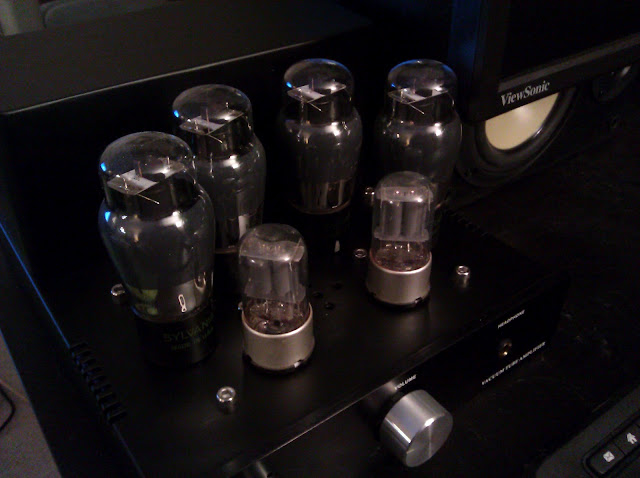 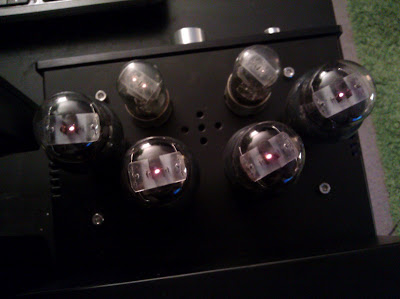 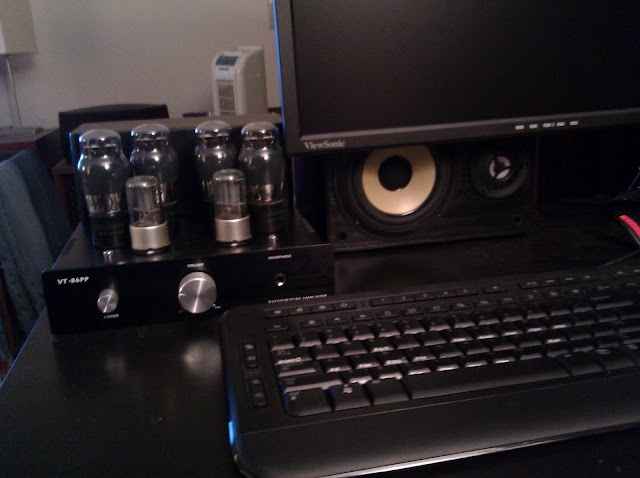 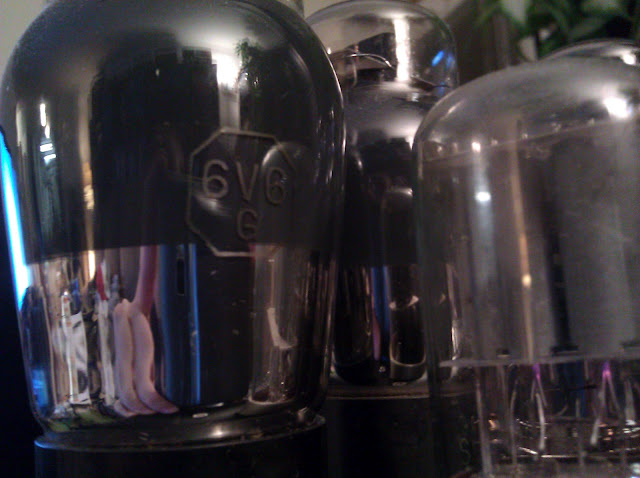 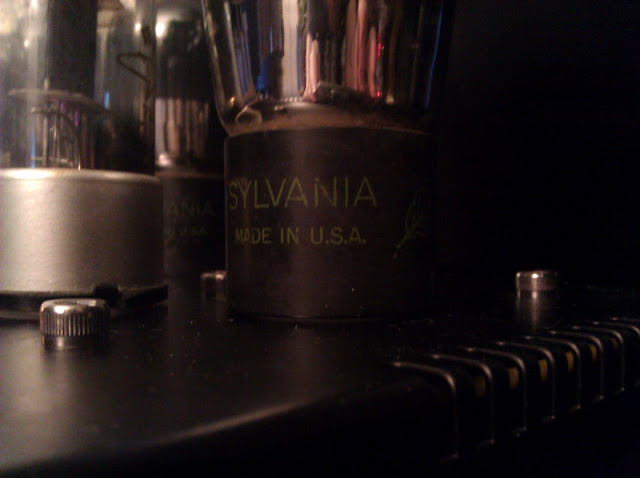 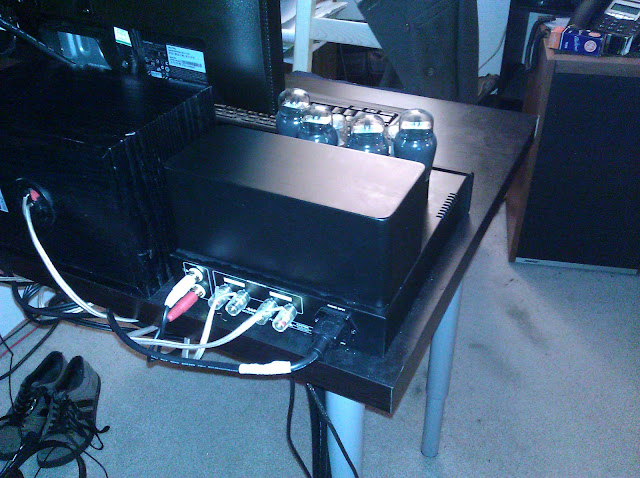 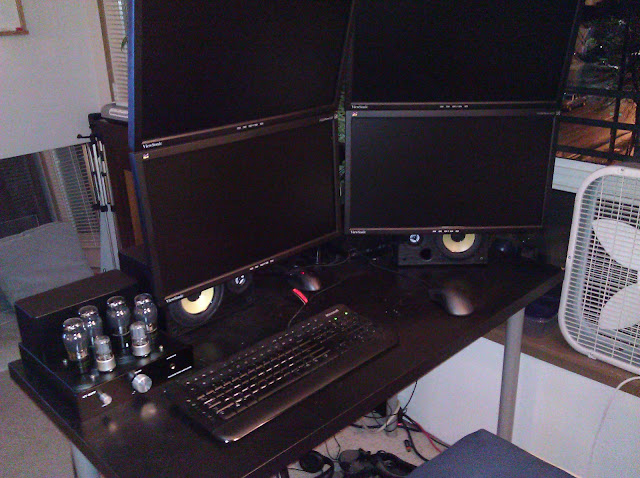 In conclusion: Mable Audio is a reputable supplier. Their product sounds great, and was of acceptable build quality for an entry-level amplifier. The chassis and platform itself will be a great starting point for more modification projects in the future. I rate this kit as a 3.5/5 due to the mechanical issues with the chassis fit and the power switch, but the electronics quality and circuit design seem to be solid. I would recommend this kit to anyone who wants to build an inexpensive tube amp from parts – but, given the complete lack of instructions or documentation beyond a schematic and some color code diagrams, make sure you go slowly and check your work and are somewhat familiar with how to read electrical schematics.

For $175 + shipping from China, it’s not a bad deal. Similar kits from more well-known sources, or U.S./European makers, run at least double the price. Once assembled, it’s very attractive and has a lot of potential for future upgrades. This was a fun and rewarding project and a nice change of pace from vintage gear while still keeping the tube connection.