Flammable cargo was prohibited under the Washington State Convention Center on I-5 last weekend according to the large Smarter Highways signs along SR-520 in Washington, as there’s some sort of maintenance happening. There’s a highway advisory radio station on 530 AM and I tried to tune in to see what it had to say about it.

As it turns out, the station was completely unintelligible due to bad interference. I could just barely make out the fact it was a highway message, but not the contents, in my car radio. With my GE F-135 radio, I couldn’t pick up either so it was time to break out the big guns, my Hallicrafters 8R40 attached to an 85′ helical antenna and managed to bring it in quite clearly.

The station beat very closely with 530AM in my receiver making a very obvious beat note, but they identified themselves as a CBC station a couple of times and were playing PRI’s The World. Some digging about where CBC stations are located, and I was able to identify the interfering station as CBK AM 540, a 50 kW clear channel station broadcasting out of Watrous, Saskatchewan – about 1100 miles away! 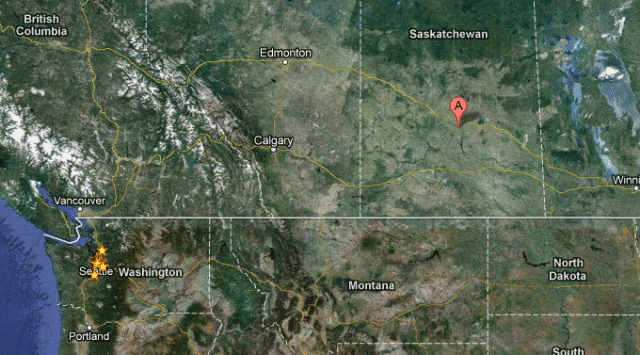 Clear channel stations running that high power at night can definitely propagate that far – or further, an experimental station in the 1930 was able to cover the entire western hemisphere and was known to take requests from as far away as Buckingham Palace. There’s nothing that can be done in this case as the interference is coming from a licensed user in another country and happened due to natural atmospheric conditions. I guess the right thing to do is just hope there’s no important traffic information being broadcast during the nighttime DX window.

CBK-AM is the furthest distance AM broadcast station I’ve yet received. I should probably keep a map of some kind.