I’m continuing to work on this Grunow 589 radio, and it’s being difficult. If you’re just joining in, take a look at the previous entries to see what you’ve missed and catch up – not to mention, there are some interesting photos.

I’m attempting to diagnose an intermittent in the RF stages of this radio. I’ve not yet tracked it down, but I thought a photo of my workbench with all of the really interesting test equipment would be worth posting: 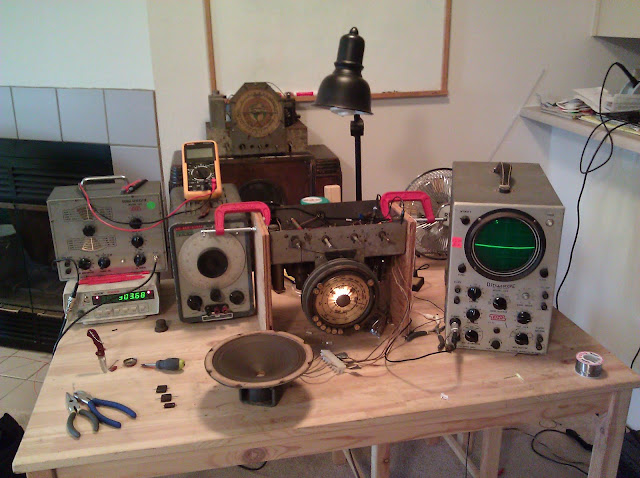 Left to right, EICO 324 signal generator, Victor frequency counter, HP 200CD test oscillator (not used in this step but will be later), generic digital multimeter, and my EICO 460 oscilloscope.

Update on 6/24: It turns out the problem was caused by a brittle wire that broke under its insulation. The break wasn’t visible, but was located when touching a certain wire changed the set’s behavior. After repairing the break, the problem appears to have been resolved.

7 Responses to Repairing an Antique Radio from Start to Finish [6.5] – Grunow 589