I’ve had the opportunity to work on several very nice Zenith radios lately and this one is especially interesting. It’s the Zenith 5-S-220 Cube. This is the first time I’ve seen one of these in person, they’re somewhat uncommon. Electrically, it’s a nice 5-tube radio with a broadcast and shortwave band, and the cabinet is very compact with the speaker firing vertically through the top of the cabinet. The black dial in the face is very easy to fine-tune.

It was sold as in running condition, and it worked okay on the standard broadcast setting, but with the switch on the Treble Cut tone setting the set picked up bad warbling low-frequency interference, called motor-boating. It also just didn’t sound that good, and Zenith radios are known for their excellent tone even from their small radios. 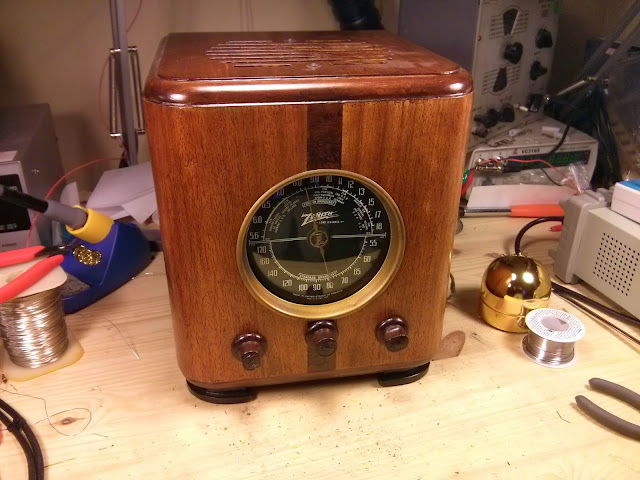 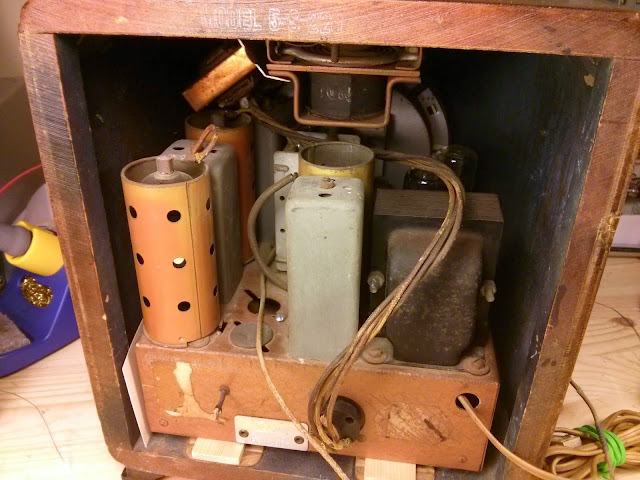 The chassis is supported on small risers to replace compressed paper spacers. It’s fairly cramped in there,but the chassis slides out easily when the spacers are pulled out and the speaker socket makes service easy. 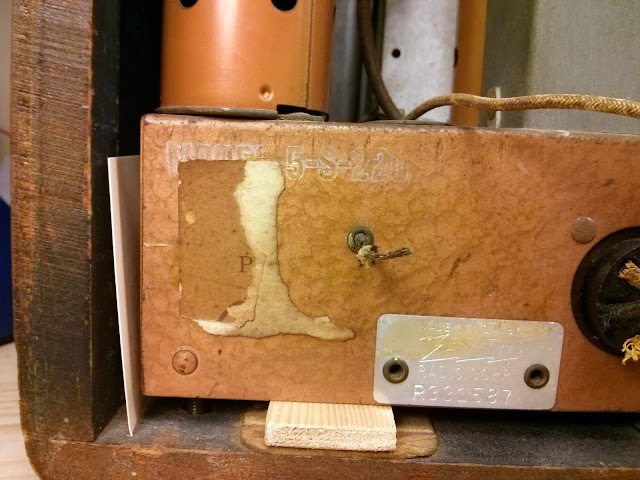 Underneath, the solder joints were all very good in fact. Mostly original resistors retained.I tested the resistors and many were well outside of their specifications; there were several other problems as well. 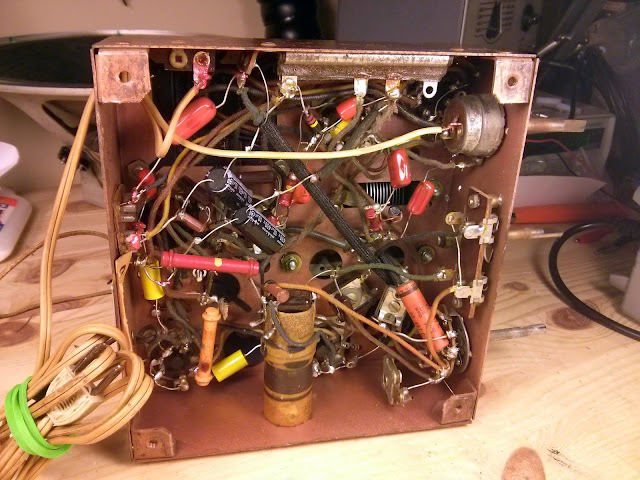 The previous service had replaced all but one of the original vintage tubular capacitors that are candidates for replacement in any vintage radio. 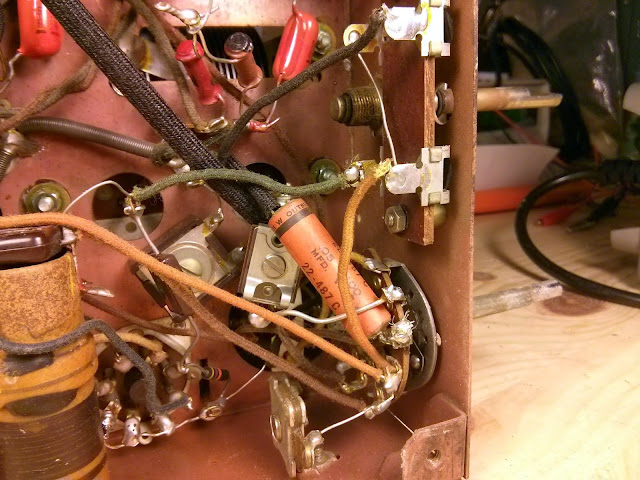 The resistors were all original. This frequently isn’t a problem – vintage resistors can still test within tolerance, and if so, don’t need to be replaced – but these were almost all bad. I found some which measured as much as 250% of their marked values. The radio actually played like this, it just goes to show you how robust these tube circuits were. They’d tolerate a lot of abuse and still sound passable. 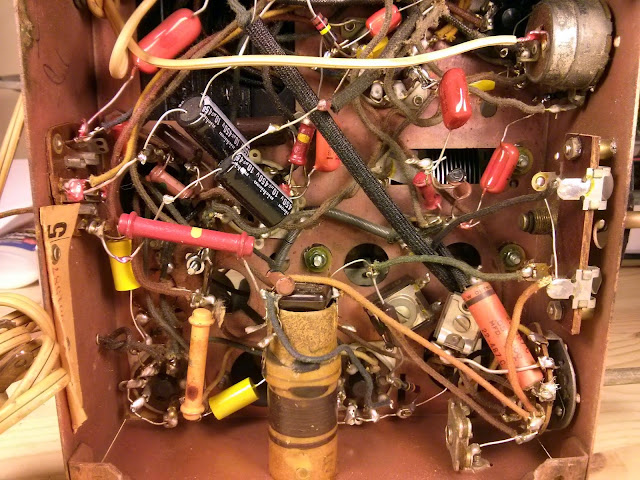 I replaced the vintage capacitor and many resistors but the motor-boating persisted. Throughout all of this, the volume is lower than I’d expect, too. I went about replacing the Micamold capacitors which can frequently go leaky and exhibit odd symptoms. These are in fact paper capacitors in a molded package – not true mica capacitors which tend to hold up well even today.

While poking around at those connections, an entire solder blob moved – the ground connection had broken off entirely: 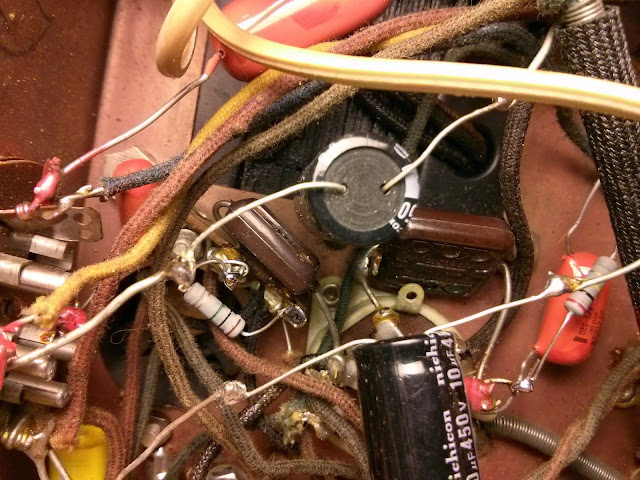 I replaced this one with a true mica capacitor and a solid ground connection. A few tweaks to the alignment later, the motor boating was gone, but the low volume persisted. Even on the normal position it was still lower than it should have been. I examined the tube line-up versus the schematic. This radio had a 6V6GT tube installed when the radio was designed for a 6F6G tube.

In general, those tubes are “fairly” close and you can often plug them into each other’s sockets. The radio will play, but with more distortion and lower volume, as they do have distinct design characteristics. The mismatch will get you significantly lower volume as a result, too. I had a 6F6G which tested like new in stock and made the exchange: 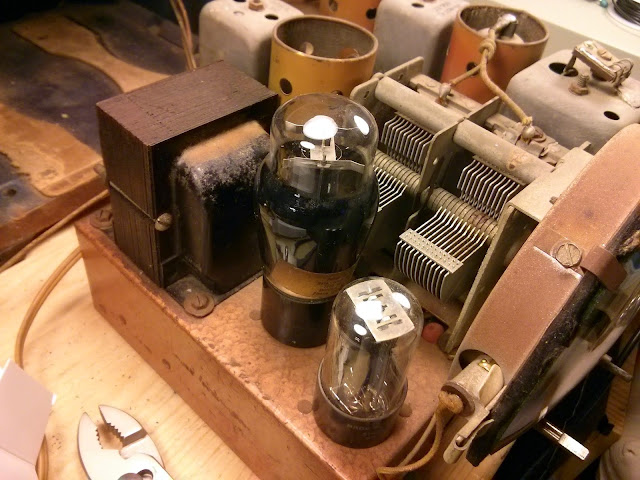 With this, the radio roared to life with perfect volume. It sounds absolutely fantastic, especially for such a small cabinet and speaker. It also goes to show: be cautious buying radios on eBay. They might even work, but often may have hidden problems like this. It’s worth it to ask for under-chassis photos to check the amount of work that was done.

With the feedback problem corrected, I performed a precision alignment and the dial tracks in perfectly. 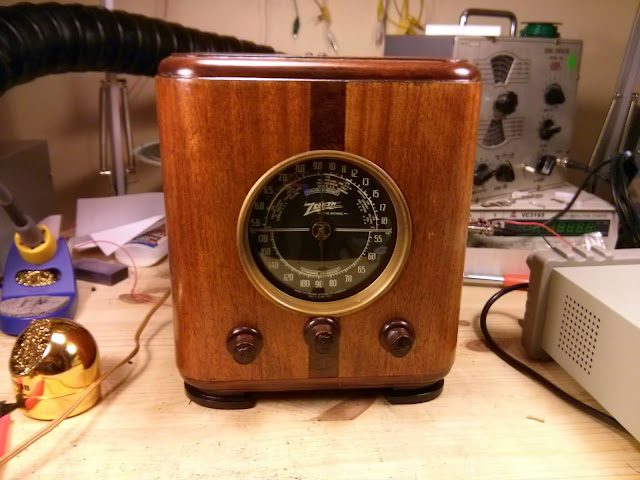 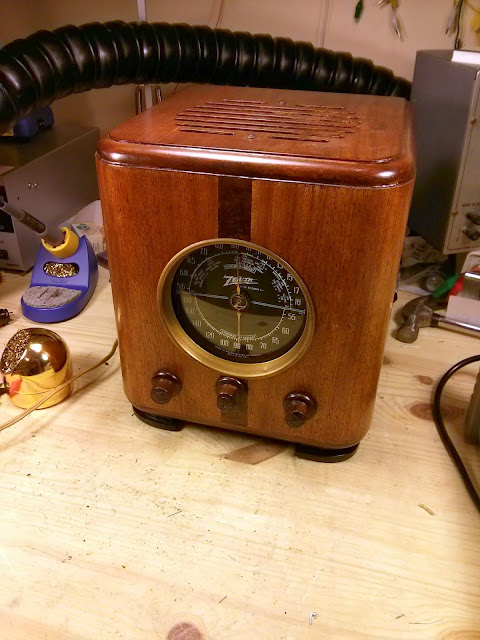 Overall, to bring this radio up to standard I replaced many resistors, replaced several capacitors with modern technologies, repaired a broken ground connection for the capacitors, aligned the radio using a standard signal generator,  and replaced a wrong tube. Now it looks as good as it sounds – practically brand new.