I picked up this 1934 Simplex Model P Dual Band radio for my personal collection about 7 months ago, but haven’t worked on it much until this weekend. It sat on my articulated chassis stand in the corner waiting for work while I took care of other projects, but its number finally came up. 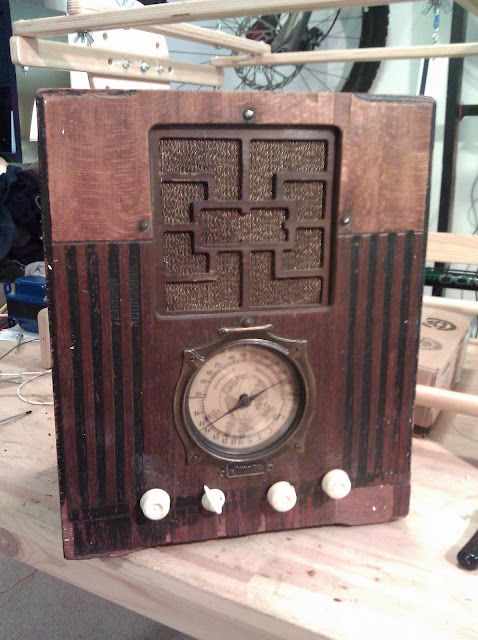 It’s not in the best shape by any means, with non-original knobs and some chips in the veneer – but the price was right, and the deco-style tombstone cabinet has a lot of potential. I did get an excellent deal purchasing this model due to the cabinet condition. The tube line-up is the ubiquitous 6A7 6D6 75 42 80, receiving the standard AM Broadcast Band and Shortwave 6-16MHz. While that tune line-up is found on low-end radios all the way up through fairly premium tabletop sets, this one is a higher-end table radio with a glass dial (not celluloid), four knobs and a continuous treble roll-off tone control. 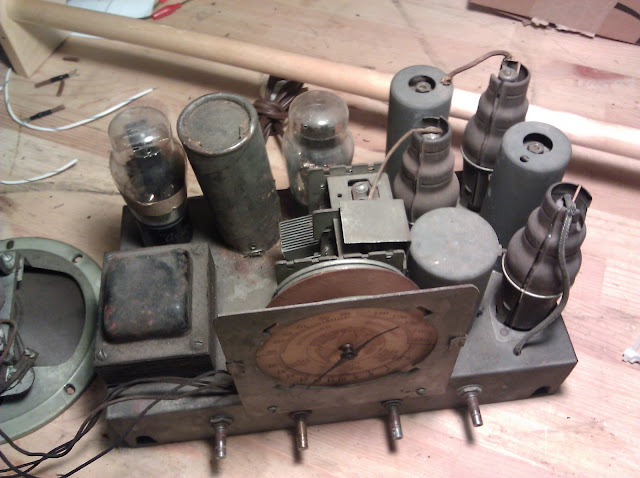 You’ll see in this next photo why I wasn’t in a huge hurry to dive in – the wiring (which looks factory to me – there are few replaced components visible) is a complete rat’s nest of free-floating solder joints and spaghetti wiring. 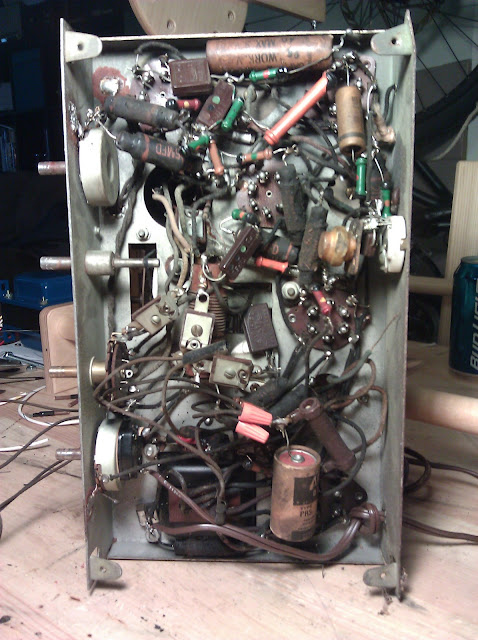 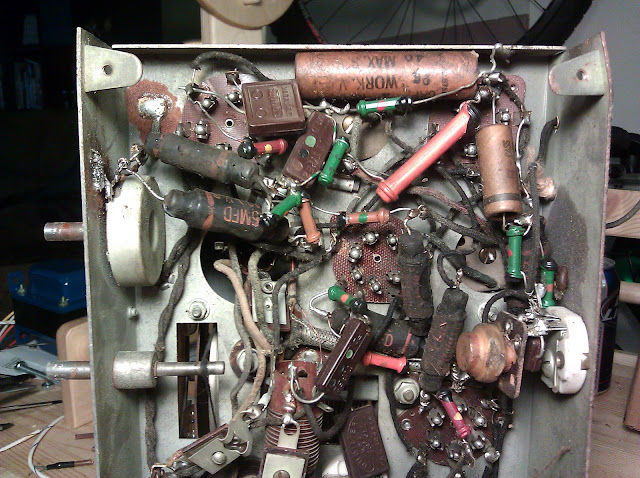 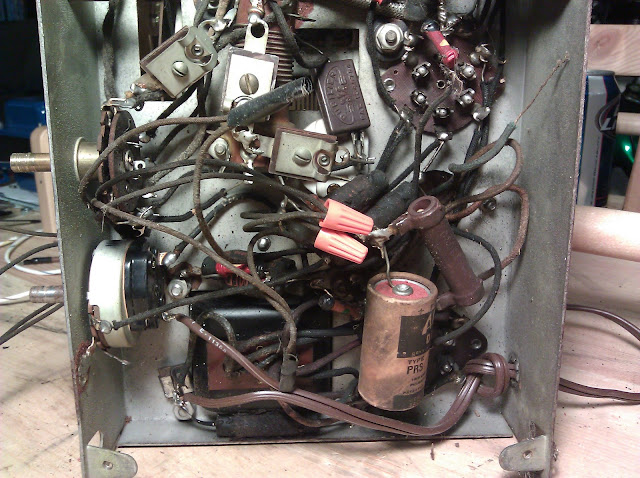 The wiring looks more intimidating than it actually is, so I dove right in, first replacing the capacitor from AC to Chassis with an X1Y2-rated safety capacitor for noise suppression, then continuing on through the rest of the radio. This model uses a negative-filtered power supply with an RLC network between chassis ground and the center tap of the transformer; less well-engineered radios frequently used only a resistor or a field coil in that location. 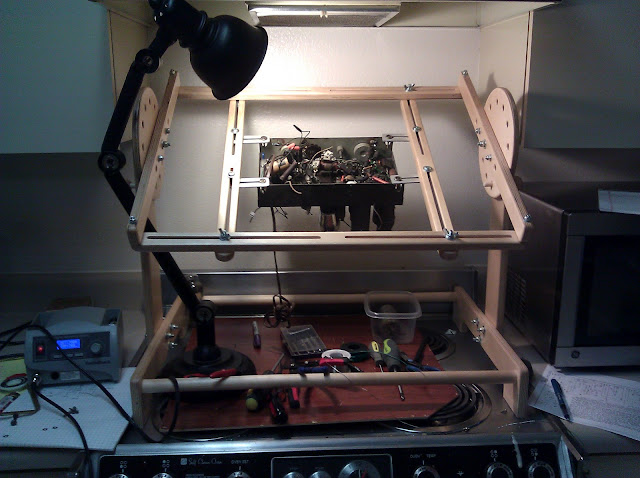 The tie points for the RLC network weren’t very convenient, and were getting pretty beat up, so I installed a terminal strip in place of the dead filter can, and moved the electrolytic capacitors and the filter network to their new home. 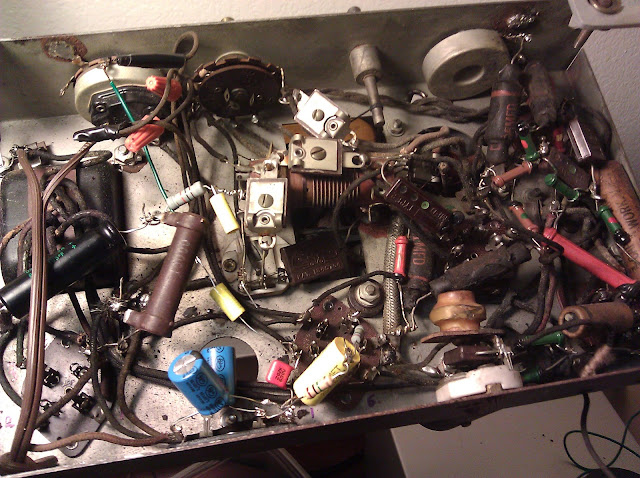 At some point in the past, the bottom lug of the volume control had snapped its solder joint off the chassis. This would cause the volume to increase (as the volume control wouldn’t be functioning as a voltage divider anymore), so I resoldered it back using my heavy-duty soldering iron.  Then continuing with the capacitor replacement. 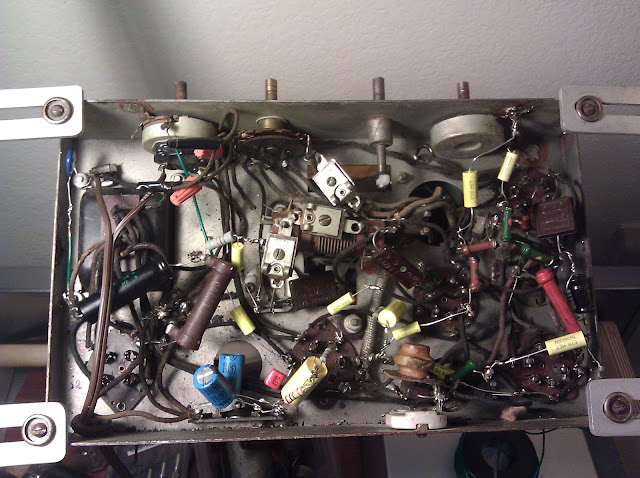 With all the important capacitors replaced, it was time to reconnect the speaker. Unfortunately, but perhaps not surprisingly, the primary of the output transformer was open. This could’ve happened through age or excessive current draw, but fortunately I happened to have an extra similar-sized output transformer for the #42 output tube on hand that was an easy substitution. 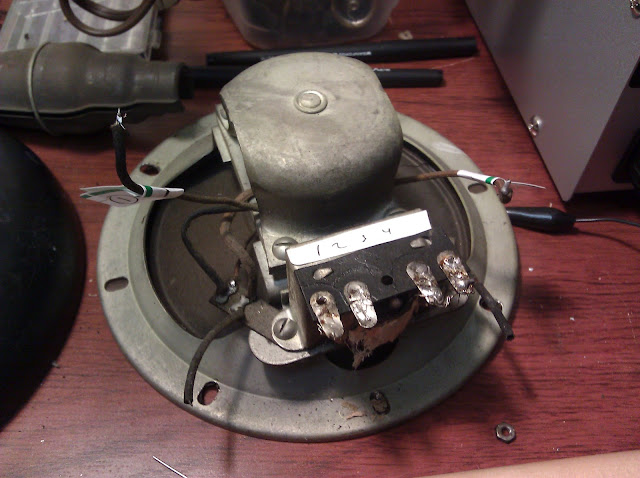 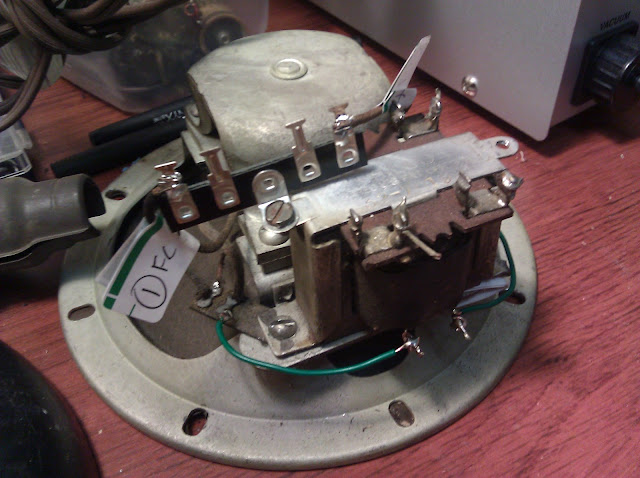 With the speaker repaired, I set the radio up and turned it on – no smoke! But no sound, either. I did the “stage test”, tapping a screwdriver to the top caps of the tubes from the 75 working towards the front-end. A click in the speaker means that stage is passing signal, and the click stopped at the 6A7 converter. (The 6A7 tube, affectionately called the converter, is the mixer+oscillator tube responsible for converting the incoming RF to the radio’s lower Intermediate Frequency or IF.) 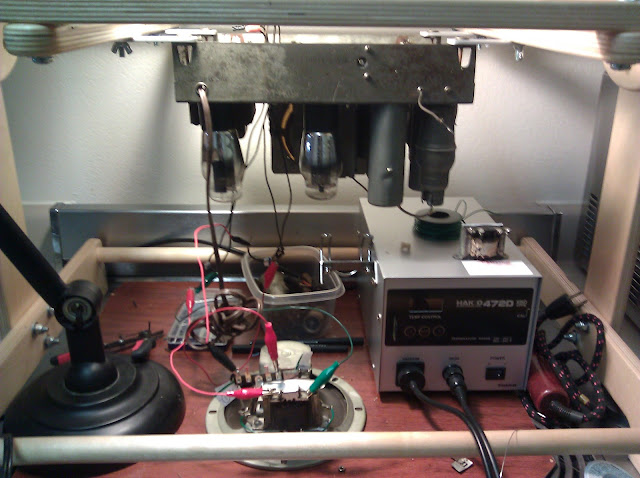 It was quite dead. 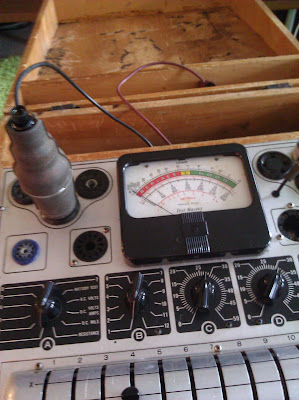 With the converter replaced, it did start to receive some stations – but weakly and with distortion. The only capacitors I hadn’t replaced were the molded paper caps near the detector, so those were the next to be replaced with a pair of ceramic discs. While there, I also replaced the associated resistors, a few of which had drifted more than I’d like but not technically outside their tolerance. 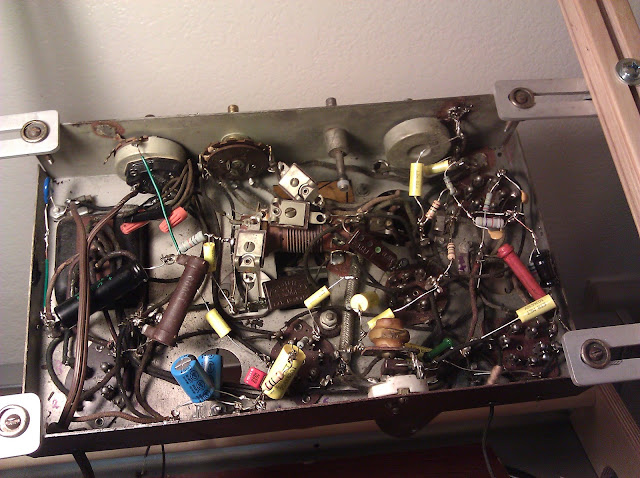 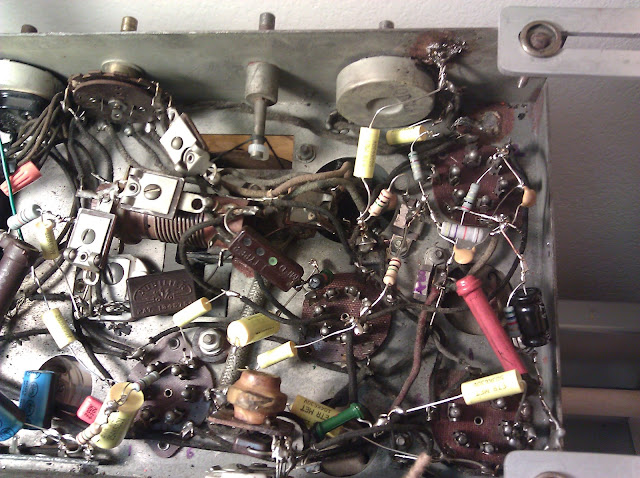 The final step was to address the slipping dial. The cord was intact but had lost some tension due to the spring stretching and the mounting gaskets sinking. This was an easy fix, though: I re-tensioned the spring using a trick I learned: just hook it half-way through. This cured the slipping dial problem perfectly. 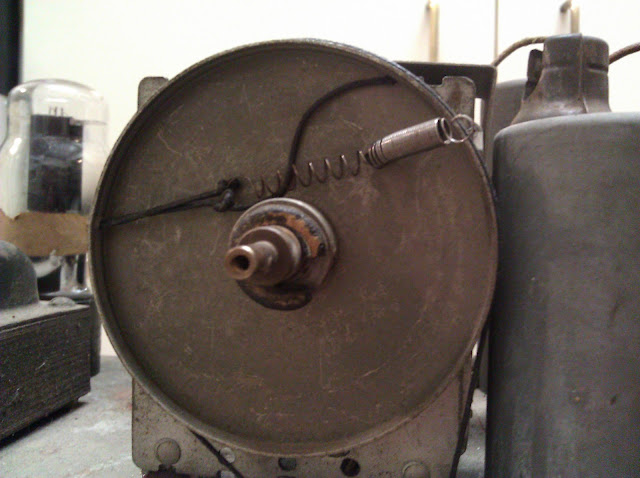 A reassembly power-up before going back in the cabinet: 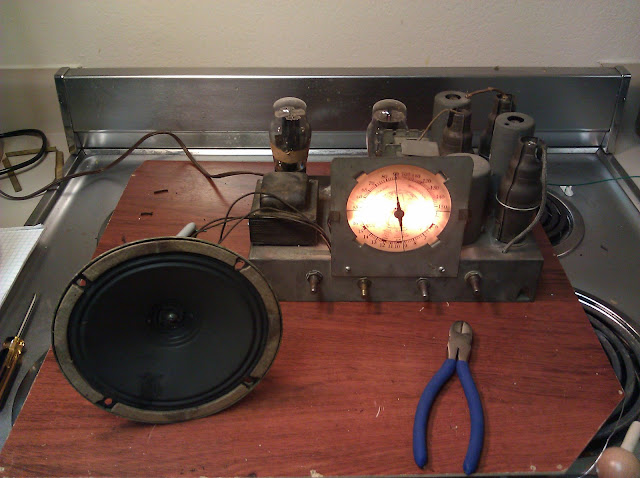 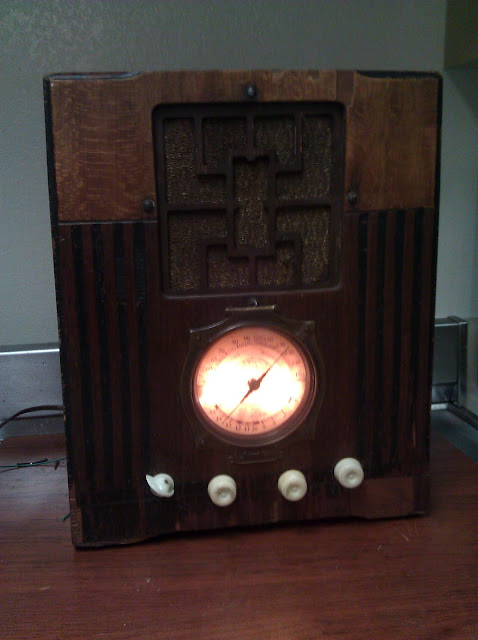 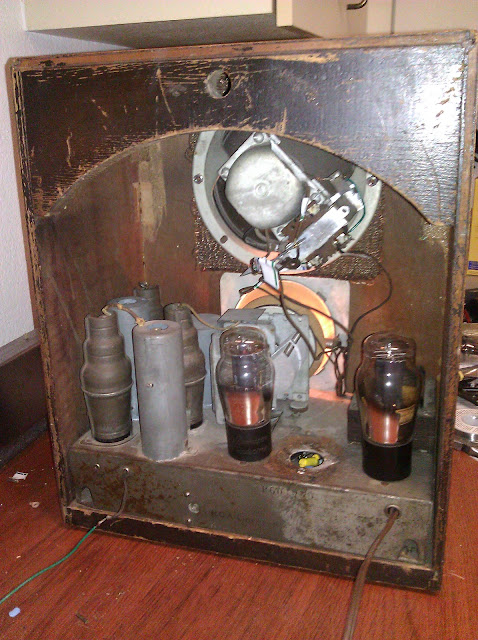 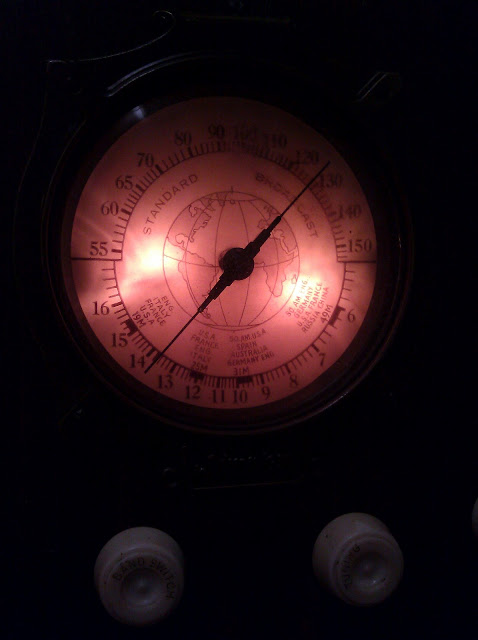 I may work on the cabinet at some point in the future, but the real reason I went ahead and fixed this one is I needed the chassis stand to be free for another incoming project, and wasn’t going to allow myself just to push this project down the road for another day. This project took about 10 hours of hands-on time, and the radio should be good to play for many years in the future. After a full alignment, it plays beautifully and fills the room with clear, selective sound.