A local client engaged me to repair his antique radio, a Farnsworth K-262P from between 1948 and 1951. His wife bought the radio to listen to records, and it came to me with reports that it had been working for a time but had inexplicably gone bad with distortion and fading, and the dial was very difficult to turn. 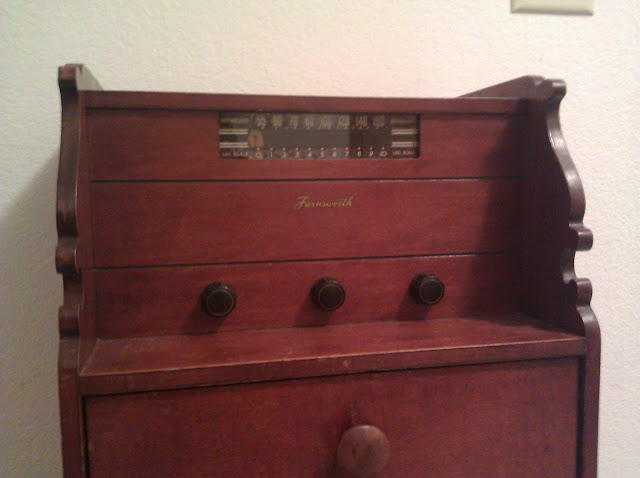 The Farnsworth (the same as the inventors of television) is a 6-tube AC/DC (series string) radio. Unlike all but 1 set in my portfolio, this radio does not use a power transformer but instead connects all the tube heaters together in a series string across the mains voltage AC line directly, then rectifies the AC voltage directly into around 170V DC. This is a less expensive arrangement than using a transformer, and the K-262P occupied the territory about one shelf up from the most economical offerings, so it’s to be expected. Even though it’s a more economical design, AC/DC radios can produce excellent sound and liven up a room the same way a transformer powered radio can, so it’s no matter for the effective performance. It uses the tube line-up 12SK7 12SA7 12SK7 12SQ7 35L6 35Z5 (notice how the voltage values – the first digits – add up to around 120?) with the first tube an untuned RF amplifier, a loop antenna, and of course there’s a phonograph on the bottom in the pull-out drawer.

The radio is of course the most important part, as without that nothing else would work, so that’s the first step in the process. I pulled it out from the cabinet and found it’s in mostly good physical condition, not too much dirt or grime or rust from the years. 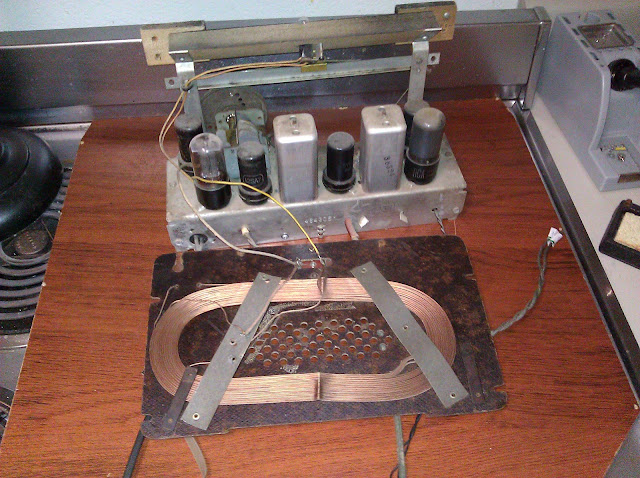 The underside definitely had some evidence of work in the past – replacement electrolytic capacitors (the large yellow cylinders) and either ’70s or ’80s issue Cornell-Dubilier film capacitors shown in red (with one 1960s era replacement in the very far top left.) Cornell-Dubilier capacitors are Made in the USA and are generally a good quality, and these are modern capacitors, so my first instinct was to replace the electrolytic caps and the one old cap and see what happened. 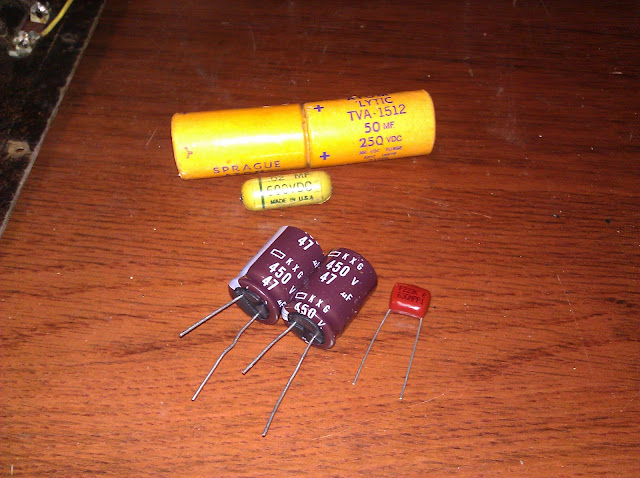 It was on to testing tubes next, and I did discover that three were bad – the oscillator, 12SA7, the output 35L6, and the rectifier so I replaced these from my stock and reception improved to the point I could pick stations out of the noise but it was still very noisy. Then I noticed a shocking wiring error made by a previous repairman: the speaker was connected directly to the output tube, instead of through the transformer like it is supposed to be. This results in about a 1500:1 impedance mismatch and a ton of distortion and reflected power. This is a very bad mistake, and is likely the reason the output tube was failed when the radio came to me. I re-wired it correctly and powered it up, and now the distortion changed. It sounded like the kind you get with a leaky capacitor applying random voltage to different tubes.

Closer inspection of the new capacitors revealed they were in fact also bad! In this photo you can see the reddish capacitor with visible discoloration on the top side. With that, it was off to replacing the bad CDE caps with replacements from my stock. I also replaced the vintage Sprague while there, even though it wasn’t obviously bad, if the similar age ones were going it is only a matter of time. 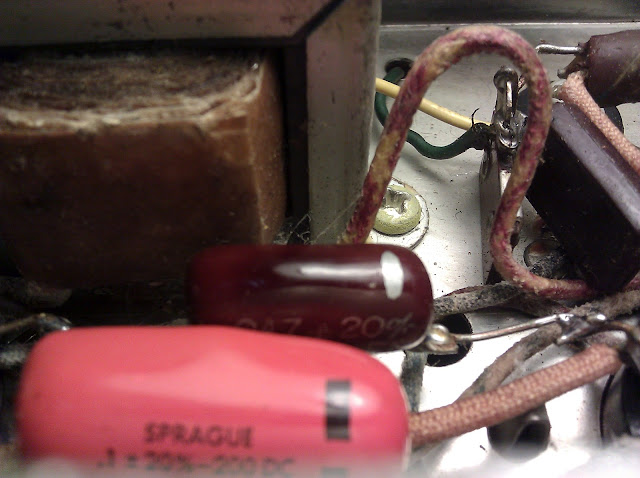 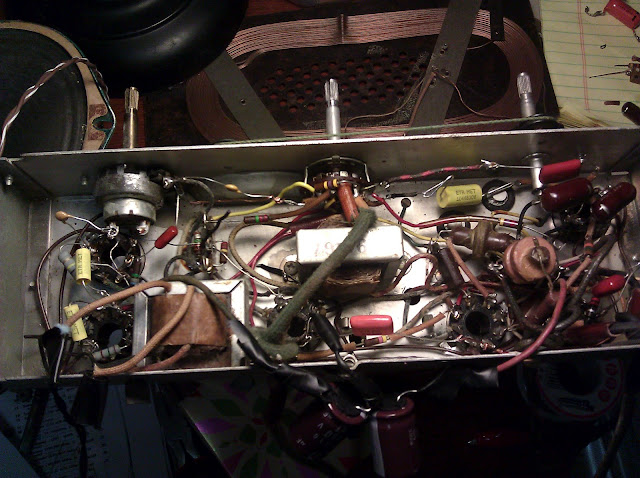 With the capacitors all replaced, the radio powered up just fine and sounded perfect. This did leave a couple of interesting issues, though: the previous repairman had put a resistor in series with the volume control, limiting its range on the top end through all inputs. This resulted in the line input being too low with the radio proper volume. After I removed the series resistor, it became apparent why it had been there – with very strong local stations, so much signal was coming through that the radio played nearly full volume even when turned all the way down. 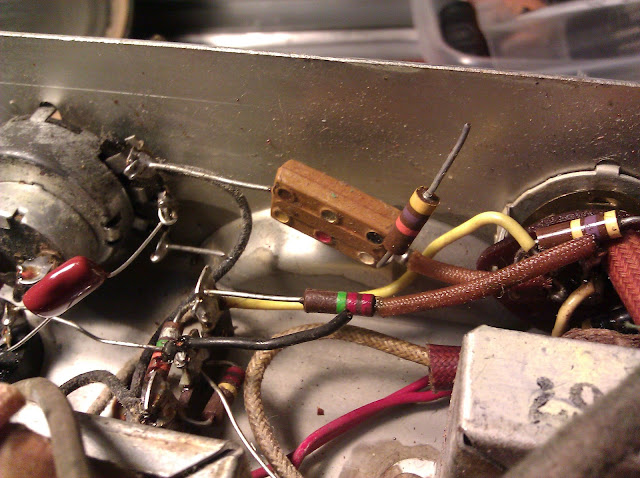 To compensate and knock the signal down a bit further, so my client can listen to the radio with his children asleep, I added a 100K resistor to the output of the second IF transformer ahead of where the RF hits the detector. This knocks the radio volume level down significantly but leaves the input un-attenuated. Finally, it was time to move on to working with the phono. The mechanism had been replaced in the ’80s to let it play 33/45/78, but uses a magnetic cartridge. The older phonograph pickups used a ceramic cartridge which put out a much, much higher level output; the aftermarket phono was far too quiet to be audible. With the volume turned up as high as it would go, you could just barely make out the absolute loudest parts of the songs playing. 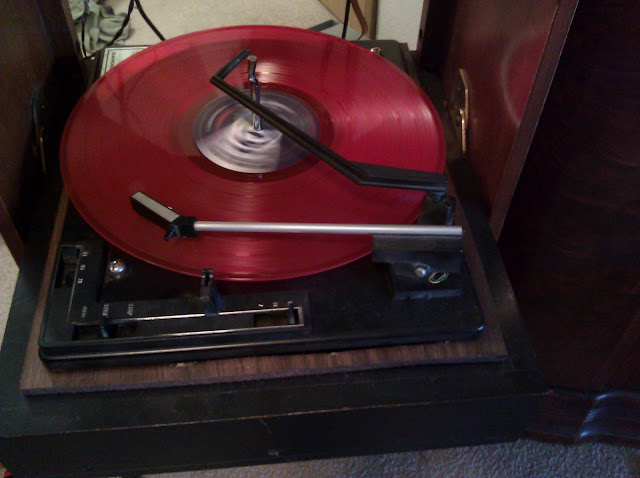 I used my Eve 6 album for testing; I don’t own a record player myself nor do I collect vinyl so I only have a few discs on hand for testing. It quickly became apparent I needed a phono preamp. Fortunately, I had one lying around; it amplifies from 30mV to 2V and was enough to push plenty of volume up to the amplifier. 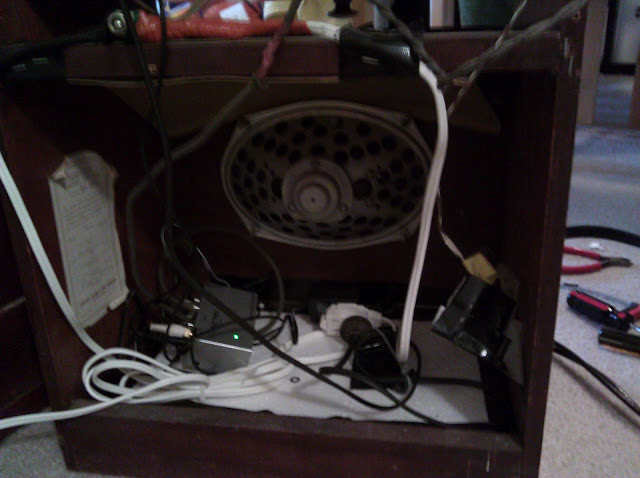 The current owner added the extension cord and master-off switch in the back; the preamp can rest nicely on the floor below the speaker. And it cured the volume problem! I played through the record, then switched back to the radio for a 4-hour burn in while I enjoyed my evening; at the conclusion of the test, she’s ready to go! 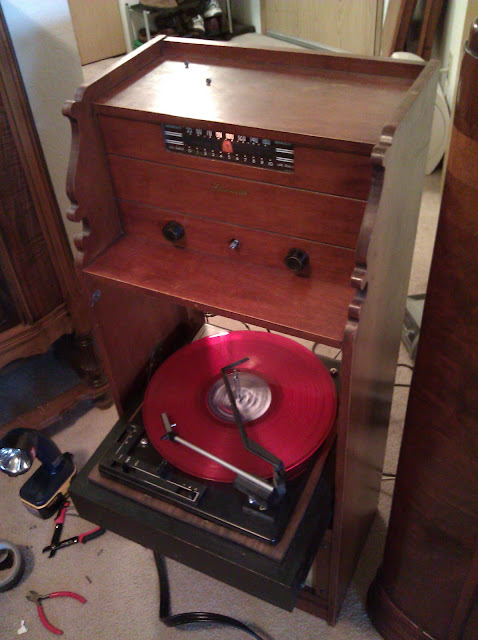 And back into final form. 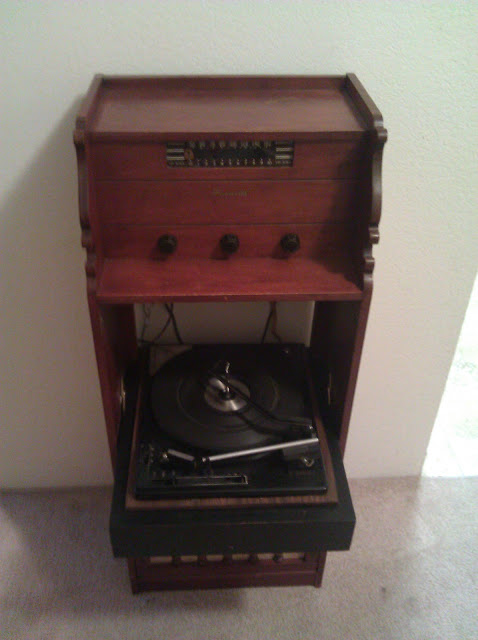 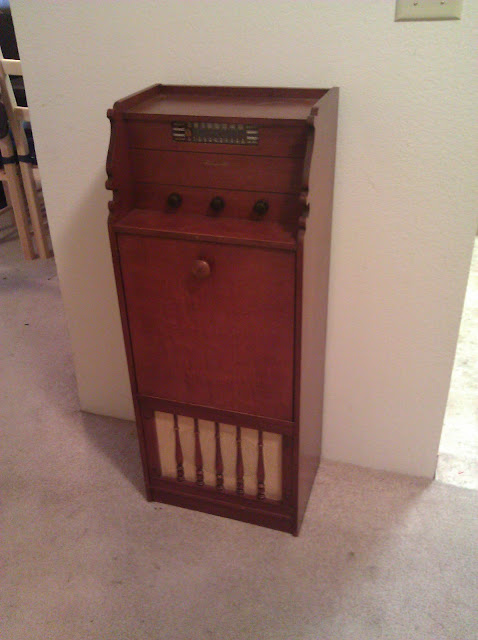 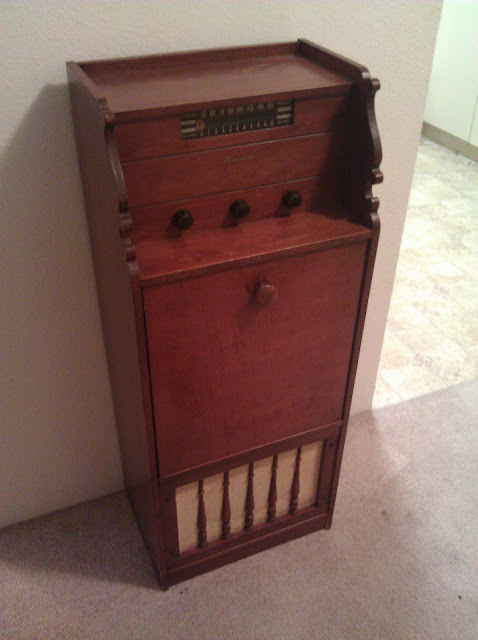 This radio was an interesting repair experience, on account of the fact someone had been in there before and had done a poor job of it, making several mistakes along the way. It just goes to show – not everyone who says they can fix something should really be trusted with the job! My work speaks for itself with full photographic documentation of the process from start to finish so you can know you’re getting quality professional service. It’s also a great example of the benefits of flat-rate pricing as a repairman charging by the hour would quickly have added up to a very large bill!

This radio is returning home to live with its owner next week, and should perform admirably for many years to come. Feel free to leave any comments or questions you have here, or inquire about engaging me to fix your antique radio.