My apartment has what I like to affectionately call the “free pile”, where neighbors leave things they were throwing out but might have too much value to throw in the compactor outright. I’ve left a few things there myself, and have made a few decent finds like a new microwave or a Samsung 225BW LCD  with bad capacitors in the power supply. This time it was a 2010 Dell Inspiron 1545 laptop computer with a nice carrying case and power adapter just left sitting. Naturally I brought it home with me, and it didn’t take long to figure out why it had been abandoned: 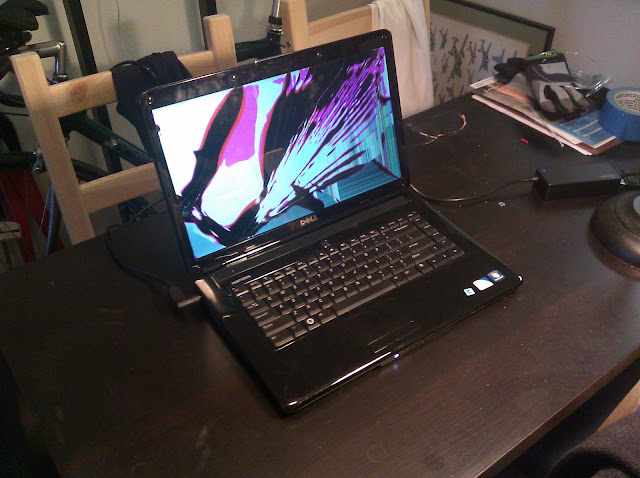 That is what a broken LCD looks like. You can tell from the pattern on the screen where the break happened – I think this laptop was stepped on, rather than dropped. The cracks originate from the center; if it had been dropped you’d see a crack originating at a corner or side most likely. I hooked the computer’s VGA output up to my television to double-check the rest of it worked – and everything else seemed fine – so it was off to eBay to find a replacement part. I managed to come up with a pulled replacement screen (with a webcam! from one trim level higher) which set me back about $80 shipped; it arrived this afternoon and I set to work.

It’s not difficult or scary to replace an LCD (or most any other part in a well-designed laptop), you just need to be good with a screwdriver and go slowly so you don’t rip any thin wires out of their sockets pulling on something too hard. This entire process – from deciding to begin through powering on successfully – took only about 30 minutes, and that’s because I was stopping as I went along to take photos.

The first step is to remove the trim panel from the top of the keyboard which hides some of the connectors, and lets you access more screws. On this model there is a notch on the right side for you to insert a screw driver to gently pry it away from the case and up. It takes a little force, and there are a few snaps as the plastic clips come unhooked leaving a plastic trim piece free. 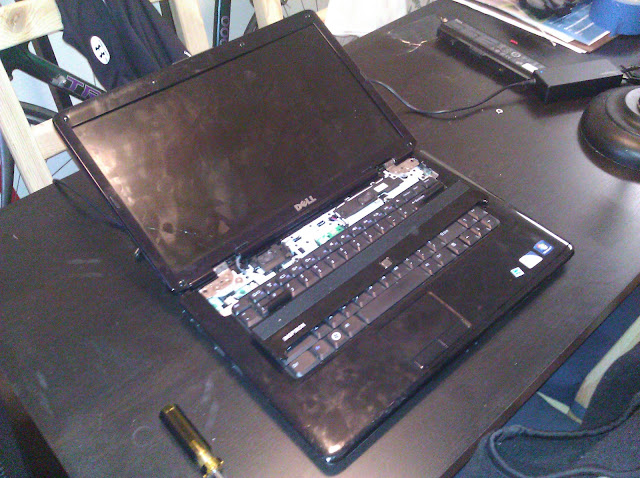 Along the top of the keyboard there are 3 screws which had to be removed to allow the keyboard to fold up and away. The ribbon connector underneath has a black retaining clip holding the ribbon cable in; to free this cable, pivot the black piece of the connector vertically towards the front of the laptop and it will snap the ribbon out. 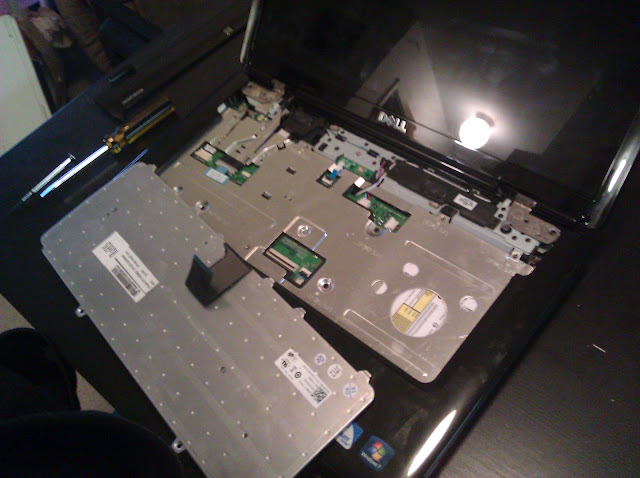 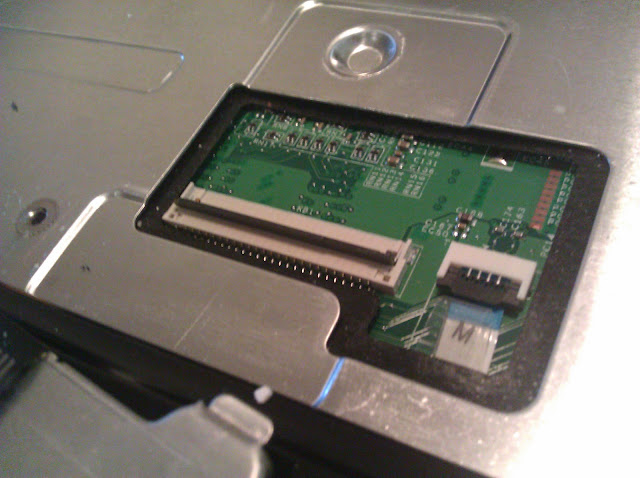 With the keyboard out of the way, we can turn our attention to the hinges and start working to remove the monitor. Before you can take the hinges off, you need to very carefully disconnect the cabling. The hinges are in the top left and right of the computer and are held in by two large top-side screws, and one screw on each side from the bottom. 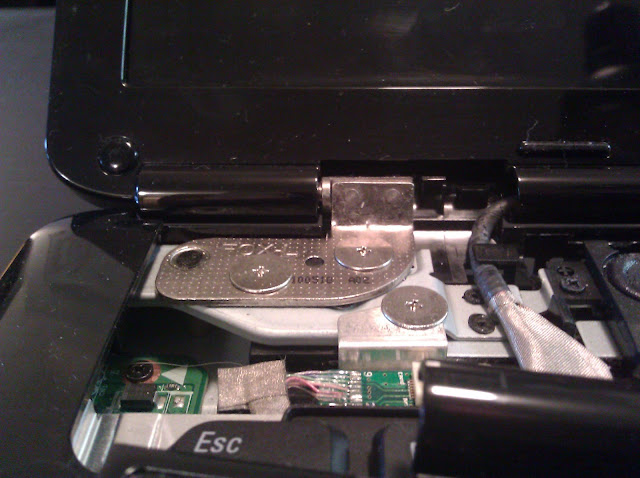 In case you’ve ever wondered why laptop speakers sound so bad, here’s a visual. I included a quarter for size reference. 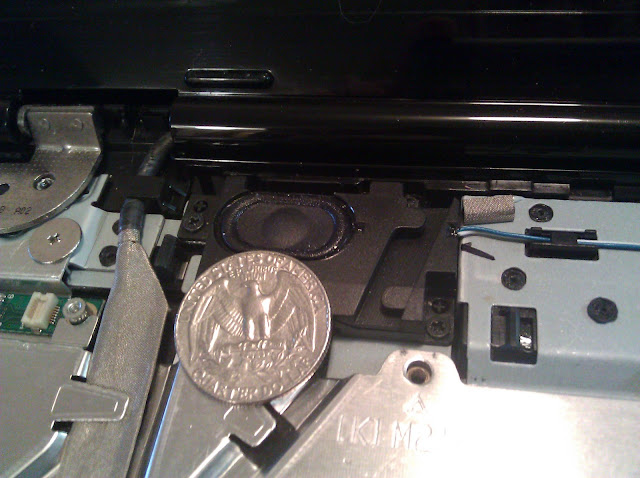 The next step happens on the bottom of the computer. Open the access panel with 4 screws, and carefully disconnect the black and white wires from the wireless card. I used needle nose pliers to get a better grip. You could also put more RAM into the computer if you wanted while you’re down here, this model has two slots but only one is populated from the factory (2GB). 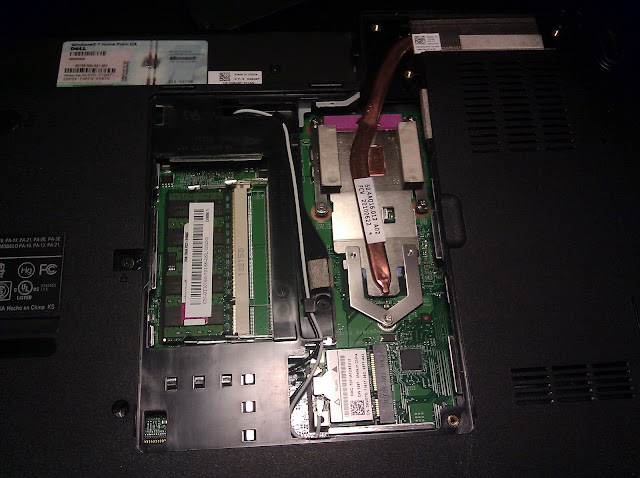 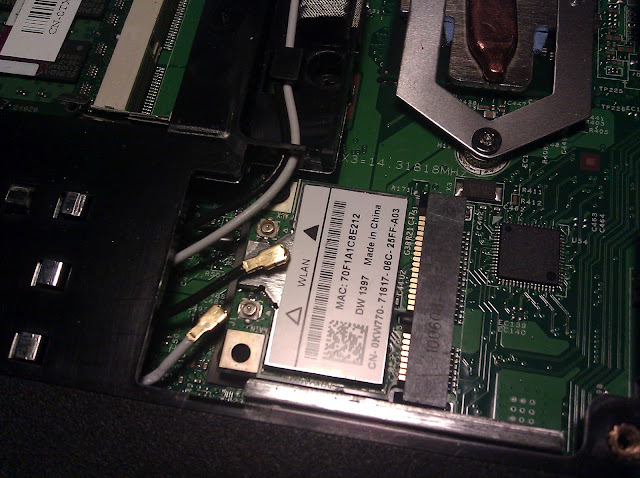 On the bottom, also remove the two screws from the top left and right marked “D” near either side of the battery. 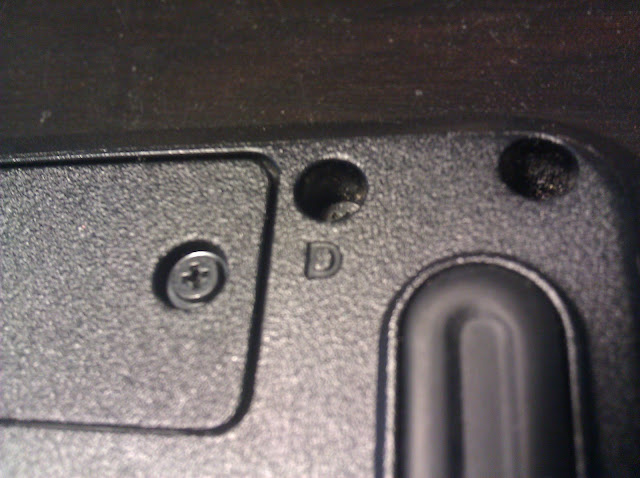 Flip the laptop back over and route the black and white wifi cables up through the hole in the chassis and away. 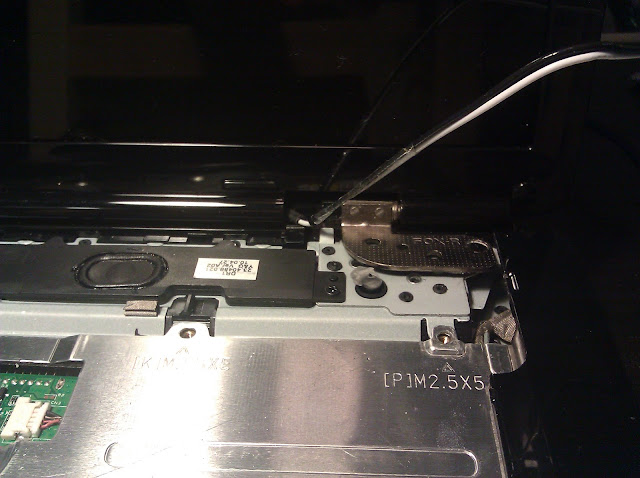 The LCD connector is a flat-panel connector. To remove this one, pull straight up on the tab and it will lift right off. 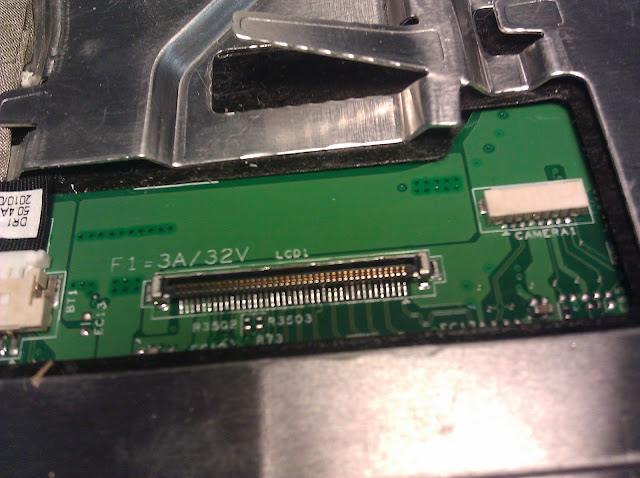 Now all the cables are free – unscrew the 4 remaining large screen mounting screws and set it aside. 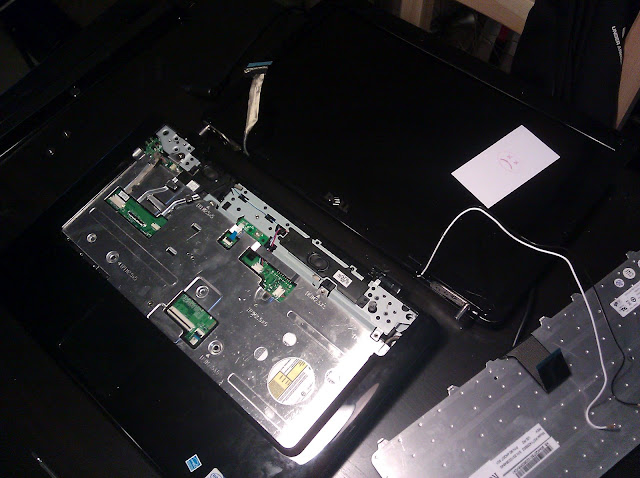 Hooking it all up is the exact opposite of taking it apart. Mount the screen and screw in the 4 top-side mounting screws and reconnect the LCD1 cable – and CAMERA1 cable if your monitor has that. Then route the wireless antenna cables down the way you took them out to the back of the computer, and reconnect the MMCX connectors. Then close the bottom access panel. 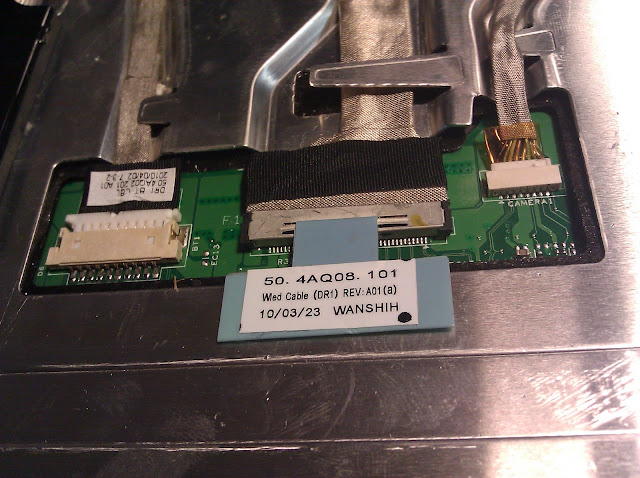 Finally, put the keyboard back together, snap the black edge connector into place, three screws, and snap the plastic trim piece back into place. 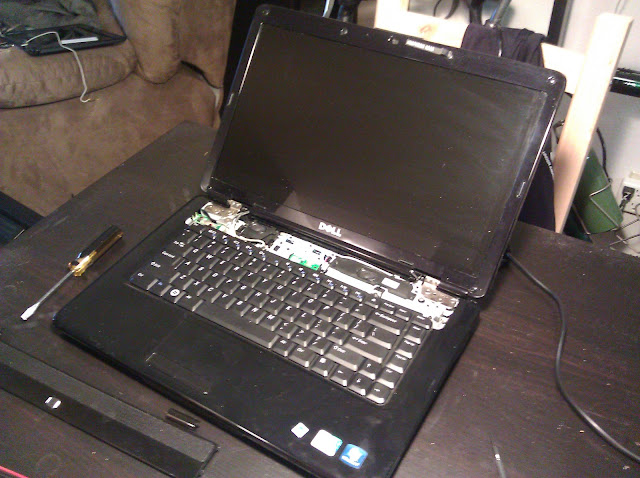 And with the laptop all closed up, it’s time to fire up! 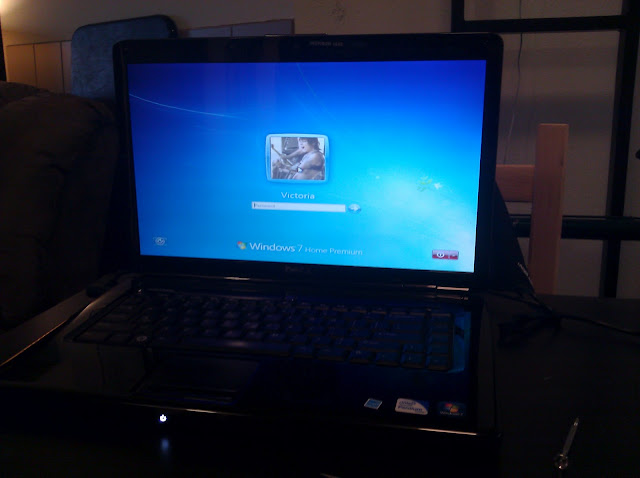 Apparently this laptop belonged to a neighbor named Victoria, and since I don’t have her password and there isn’t an admin account on the computer, I’ll be wiping the operating system and installing my own copy of Windows on it from scratch. Now the dilemma is, whether I want to keep this and use it for myself, or if I want to sell it! That’s not a bad problem to have.