Bose 901 Series I Active Equalizers came in two varieties, which can be used interchangeably, but have fairly different circuit designs. It’s simple to tell them apart for ordering parts for a repair with a quick inspection of the inside.

The Early Production model extends to at least serial #7346, but likely higher. The components are arranged somewhat chaotically, and there are no silkscreened labels on the board.

The second production run has components arranged in neat rows, and a significantly expanded array of electrolytic capacitors along the rear of the PCB near the RCA jacks.

Schematics of each production run, with the large power supply electrolytic capacitors highlighted. (Output capacitors are not circled.) 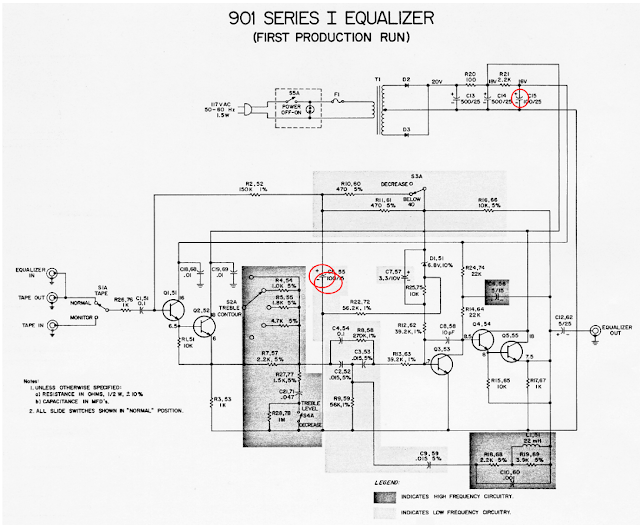 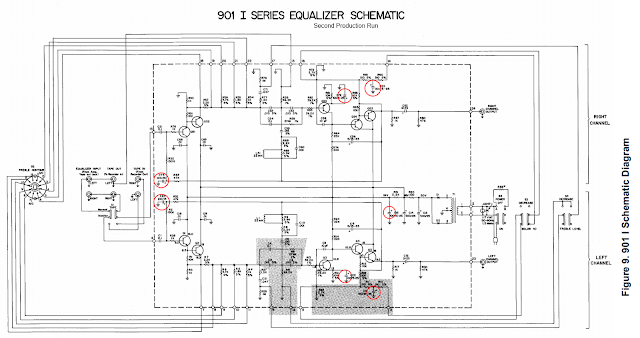 The equalizer is a necessary component of the Bose 901 speaker system, Bose’s highest-end hi-fi equipment. The speakers are specially designed in a way that requires the signal to be equalized and pre-amplified, and if you don’t use the Active Equalizer they’ll really sound pretty bad. It’s surprising how many people have forgotten this fact about the 901-series speakers over the years, but the lack of using an equalizer might be where derogatory slogan “Bose: No Highs, No Lows” came from. Read more about why the Active Equalizer is necessary in a response to a reader’s question.

Most Active Equalizers are getting pretty old, and many components like the electrolytic capacitors have a limited service lifetime. As they age, their performance degrades and you’re left with reduced frequency response or other problems. Read more about exactly what goes into an overhaul of an Active Equalizer.