Short Project: A New Lease on Life for an Unknown Small Radio

I visited a radio collector’s estate sale this morning and went home with a couple new projects. I started working on the first of them this afternoon, an incredibly simple small radio without any particular brand identification. I snapped these photos quickly while working, so they’re a little less pretty than I usually have. There’s a complete picture at the bottom!

Edit: I’ve identified this as a private-label rebranding of a 1935 Mission Bell model 35 radio. 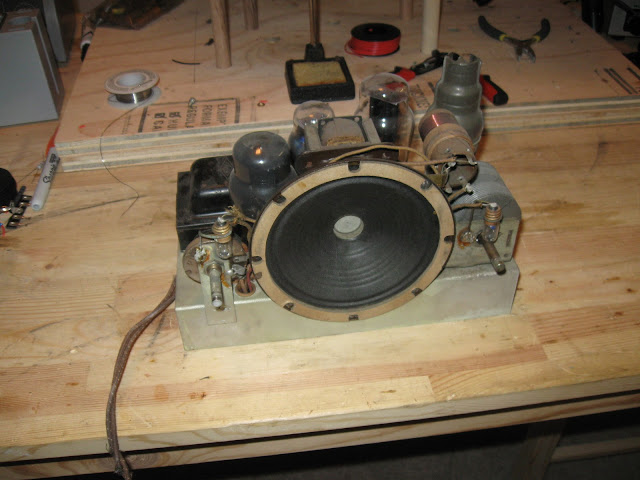 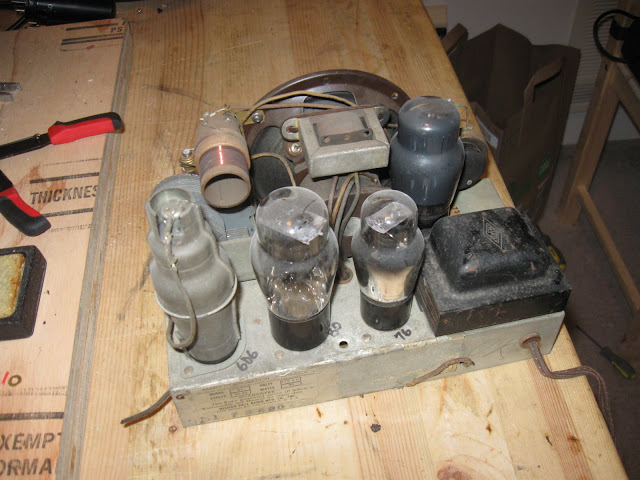 The radio is very simple. It’s a 4-tube tuned radio frequency (TRF) type receiver with line-up 6D6 76 42 80. This is about the simplest radio you could make during the mid 1930s, acceptable if you lived in an urban area close to the radio station but not sensitive enough to pick up anything further away. 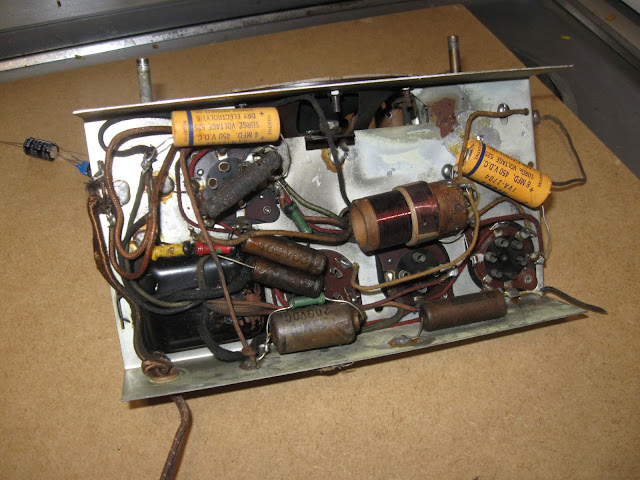 Like I said, there’s not really much going on down there. It has a total of six capacitors, five resistors, and an interstage coil.  I replaced everything that could possibly be replaced, including the fraying power cord, and added an interference suppression capacitor across the line. I changed the 4uF and 8uF filters to both 10uF, which is within the tolerance for the 80 rectifier and will eliminate a little more hum. 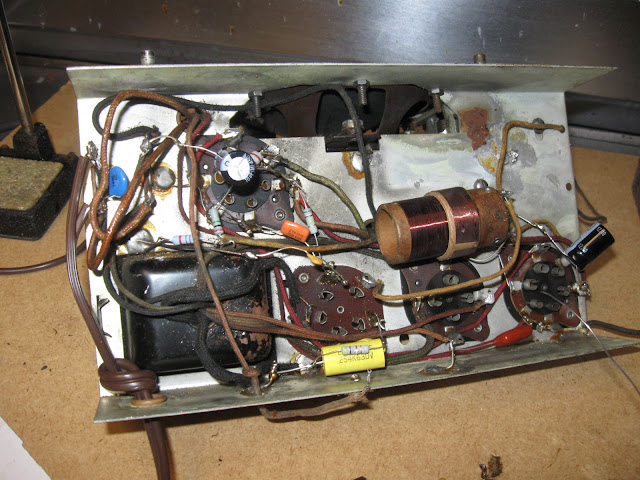 Powering on for the first time…a whole lot of nothing. 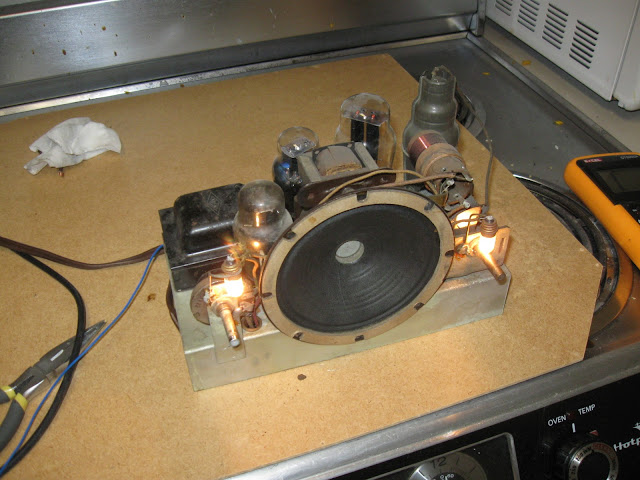 Turns out the output tube, the 42, was bad. I don’t have any spare 42s, but it’s basically identical to the 41 tube and I have a few of those lying around. With that substitution made, it makes sound! As you can see, I worked on this one in my kitchen with the vent hood going – the main work bench is taken up by the GE that is currently on hold pending a tube to arrive in the mail. 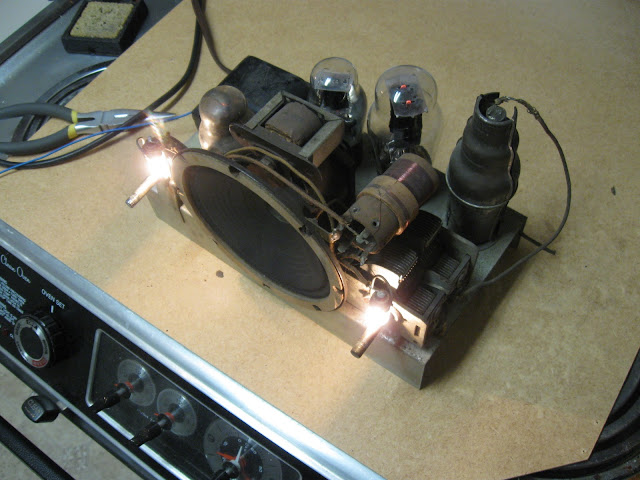 Back into the case. The radio itself bears a tag indicating it was built by Mission Bell in Los Angeles but the provided model, 41, does not match the Mission Bell model 41. It’s most likely a no-name contract radio sold in a neighborhood drugstore or similar. 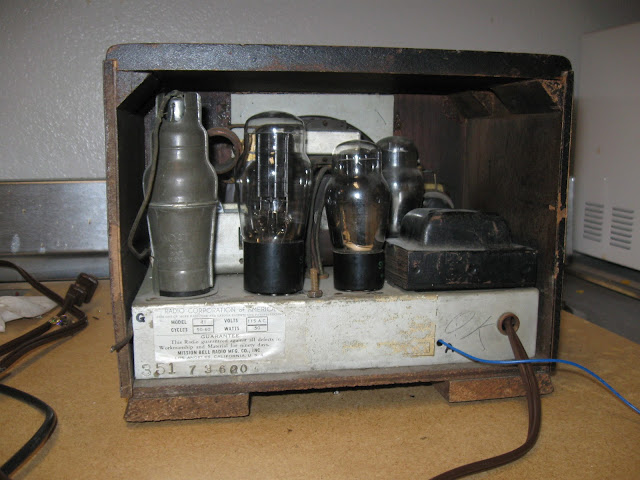 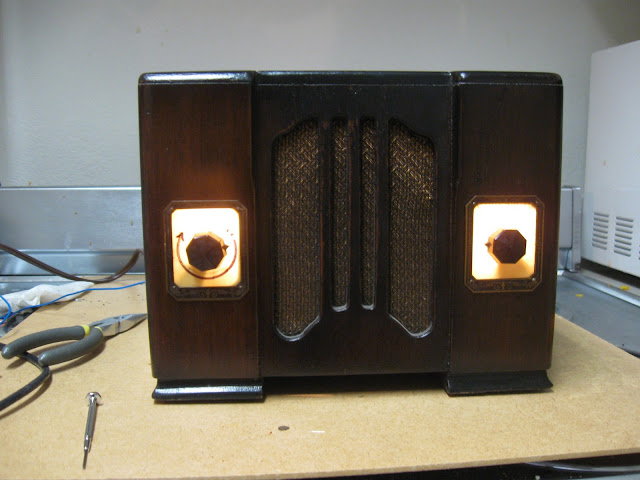 Power-Volume on the left, Tuning on the right. It’s not the most exciting thing in the world, but it was a fun short project that took about 2 hours total – some of that time spent figuring out what a totally obliterated resistor was supposed to be, and finding where I’d put my stash of #41 tubes.

1 Response to Short Project: A New Lease on Life for an Unknown Small Radio