I’m continuing to work on this 1942 GE radio which I’ve been enjoying in my office for a year, and now it’s time to make it play again. I’ve pulled the chassis out of its cabinet for inspection, made a test jig, and rebuilt the multi-section can capacitor above the chassis due to lack of room underneath for mounting replacements. In this issue, I’m going through the capacitors and cleaning up a few other issues that cropped up along the way.

As we’ve already seen, there’s a fair amount going on down here. For all the empty space under this large chassis, General Electric’s engineers decided for one reason or another to use only about 1/3 of the available space and pack everything into that area as tightly as possible. There may have been some interference concerns, but I suspect a cost-saving measure for one reason or another that’s long lost to history. It does make it a lot of fun to work on, as capacitors are tucked in between the band switch, three layers deep under wiring and resistors, or otherwise made as annoying as possible to access. I’ve been spending a good bit of time with a needle-nose in each hand and that requires a special amount of coordination that makes for slow going.

This radio uses an interesting arrangement. On shortwave or AM bands, the first tube is a tuned RF amplifier helping with distant reception. On the FM band, the first tube is switched into the first stage of a cascade converter system where there’s a two-stage stepdown to the 4.3MHz intermediate frequency – this was done because at the time, tubes didn’t have the bandwidth to perform the conversion in one step without losing quality. It makes for a crowded and more complicated circuit, though, as quite a few coils are switched in and out depending on what’s being requested at the time. 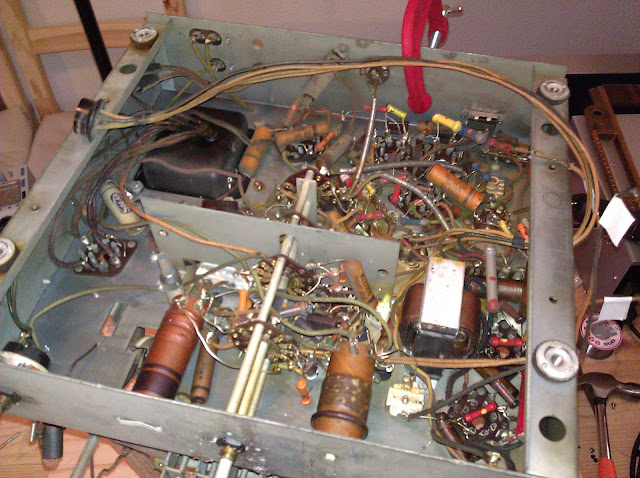 The radio bears evidence of having been serviced many times throughout its life with several different brands of capacitors from varying ages, date codes ranging from 1940 up into the ’60s. There’s the usual poor soldering in a few spots, clipped component leads left on terminals, and general quick re-work but by and large it’s in decent shape and doesn’t appear to have been “hacked on” very much.

I began replacing capacitors one by one, mixing radial or axial styles depending on the location, and came to a resistor that had burned out – just to the right of the red clip I’m using as a marker. 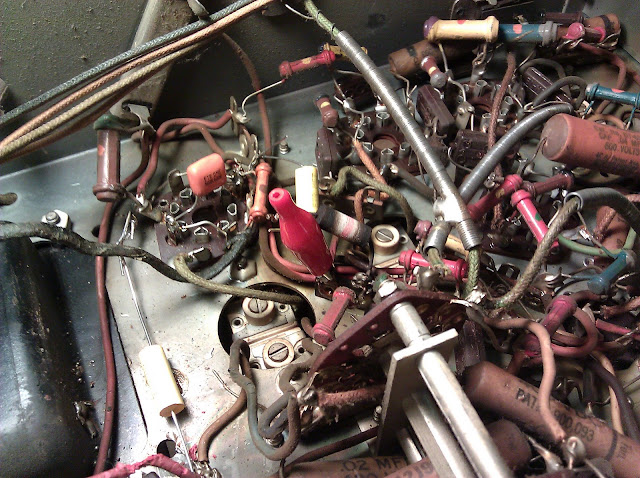 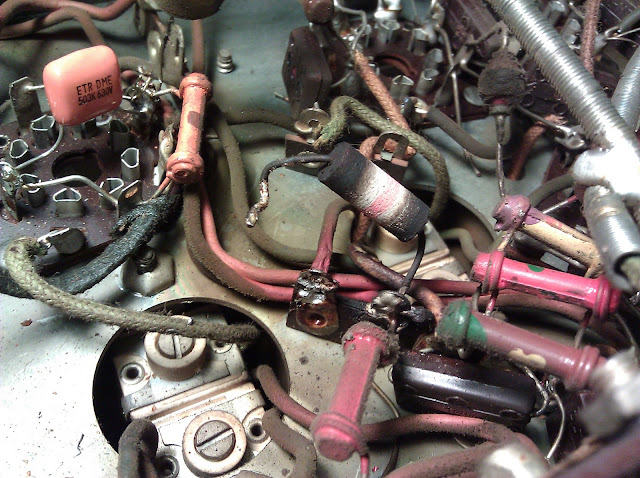 My copy of the schematic wasn’t very readable, but another hobbyist was able to supply me a better scan and I ended up purchasing the complete set of high-resolution media as a result of seeing this sample. 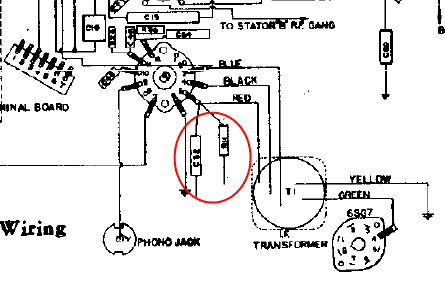 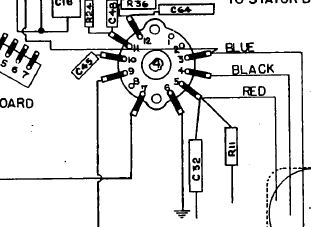 With this wiring snip, the full schematic diagram, and some confirmation from another hobbyist I was able to identify the burned out resistor as R-11, 2.2K Ohms 2W, which supplies B+ voltage through IF transformer T1 to the plate of the 6SG7 converter. Capacitor C-32, a 0.02uF coupling capacitor, was shorted which passed B+ directly to ground and caused it to burn up quickly. This obviously happened at least once in the past, as C-32 was a replacement as was that resistor.

Capacitor replacement followed pretty unexcitingly, assisted by my Hakko for cleaning up terminals. I rebuilt the above-chassis capacitor block in Part 3, linked from above. It’s slow going due to the large amount of brittle, crumbling rubber wire and tight quarters. Many restorers advise either replacing or covering with heat shrink this wiring as if it crumbles, it could short out. Mine is mostly intact, and by taking extra care not to bend – just to push – the wiring around I’ve avoided having any crumbling accidents so will not be doing that time-consuming step unless it turns out later that it’s absolutely necessary. 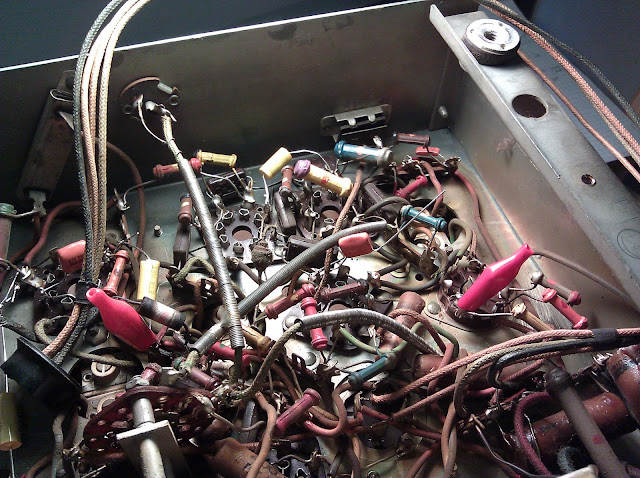 Very unfortunately, though, a tie point snapped off the socket below the molding while trying to replace one of its connections. These loctal sockets seem more fragile than the octal sockets used in 9 of 11 tubes in the radio. I ordered a set of brand new ceramic loctal sockets from Angela Electronics who boast “Since 1977 we’ve supplied thousands of hard to find items to musicians and tube audio enthusiasts worldwide.” Hard to find no question, as they’re the only site I’ve found that sells loctal sockets – as well as brand new ceramic 5- and 6-pin sockets! On this fact alone, they’ve got all my business for new sockets going forward. 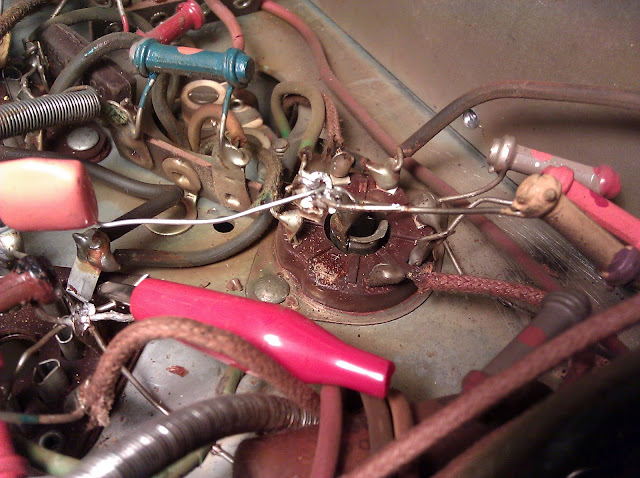 The socket arrived; I carefully remove the wiring from the terminals and drill out the rivets for the socket to replace. 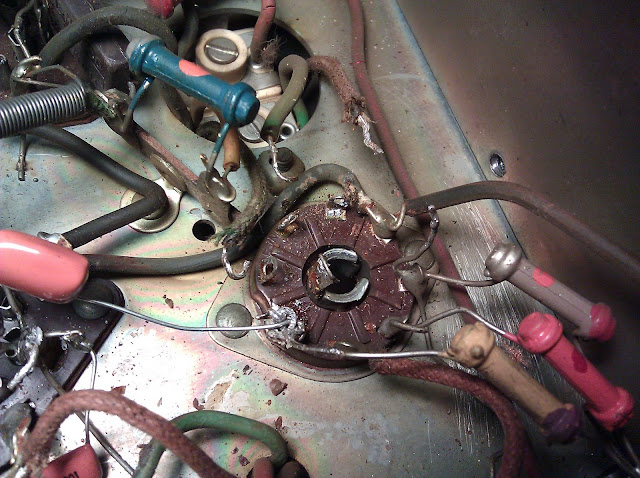 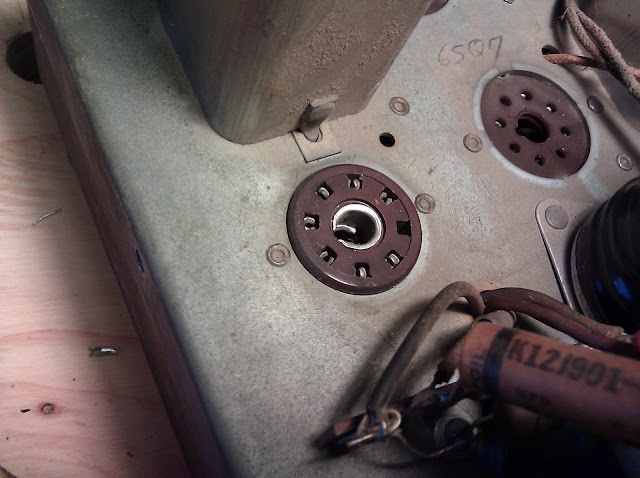 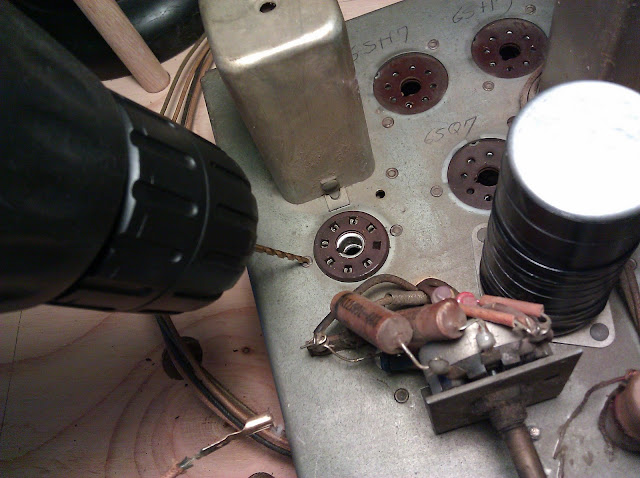 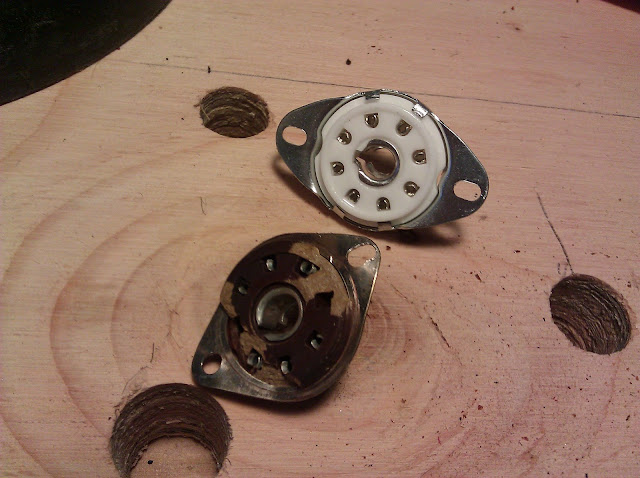 Ceramic sockets are nice and durable. But, naturally, there was another issue: the mounting tabs on the 7K7 socket weren’t spaced evenly with the chassis holes AND unless I wanted to mount with rivets instead of 6-32 screws, I wouldn’t be able to get the tube to seat properly – the mounting was interfering with the base. At this point, my significant dislike for loctal sockets was solidified and I said forget it, grabbing an Octal socket from my parts bin. I mounted the octal socket above the chassis held in by the retaining clip to ensure there’s enough space to seat the tube properly. 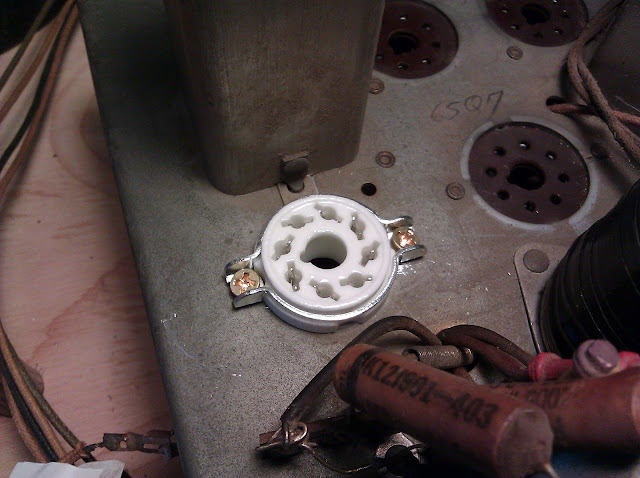 A 7K7 tube would go into the loctal socket; for the octal socket, the same tube is labeled 6AQ7GT. I don’t have one of those in stock so ordered from eBay for $2. They’re both double-diode/triode tubes, serving as discriminator and phase inverter for the audio output. And, annoyingly enough, they’re laid out somewhat differently. Whether this was for any particular technical reason or just a rivalry between companies, I don’t know but the socket required re-wiring beyond just hooking the leads back up.

With that mapping completed, it was time to re-wire. This required slightly extending some of the wires coming from the discriminator transformer. 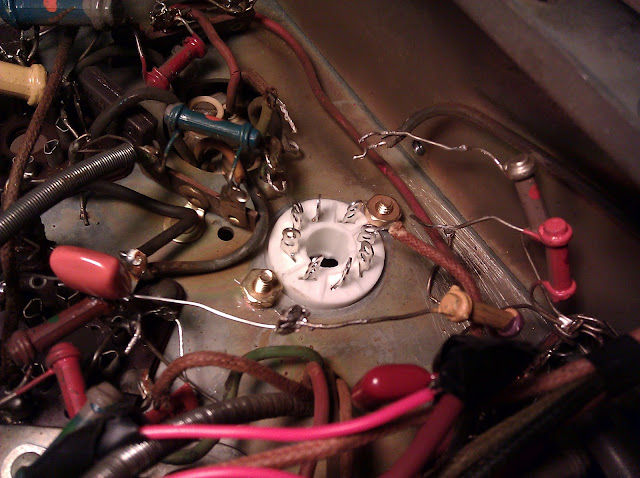 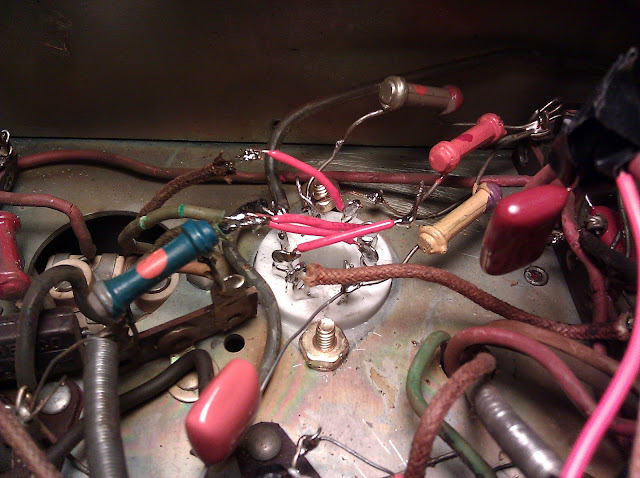 This radio is by far the most frustrating to recap of any I’ve worked on yet. It might actually be the most complex one I’ve worked on so far anyway, but the construction – layers upon layers of tight components with sensitive lead dress requirements buried deep inside the radio. Much of the time I was replacing some of the deeper components with a pair of needle-nose pliers in each hand, and I even had to remove the output transformer from its mounts to replace three capacitors located basically under it. 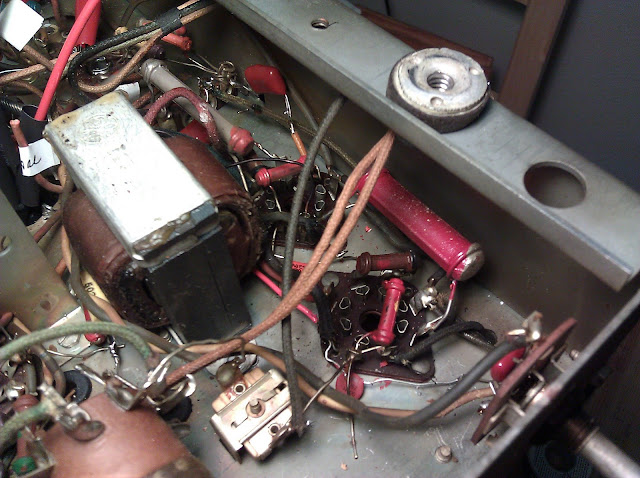 Around the output transformer and push-pull output tubes, there were a handful of 1000V-rated 0.05uF capacitors. I don’t have 1KV metal film capacitors in stock, so I used 1KV-rated ceramic multilayer capacitors with a Z5U temperature coefficient…should be mostly sufficient for the application. Z5U-rated capacitors operate between 10C and 85C with a maximum variation of -56% to +22% capacitance, and honestly the original manufacturing tolerances of paper, foil and wax were probably broader than that in the first place. 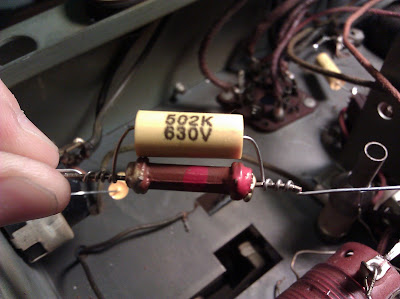 A resistor bypassed with a capacitor. The resistor itself is a 1.2K 5% resistor, but it’s actually drifted by about 10%; I’m hoping this won’t be a significant issue but if there’s an issue around the oscillator circuit, this’ll be the first place I revisit. If I’d noticed the tolerance marking before reconnecting, I’d have replaced the resistor outright as well. 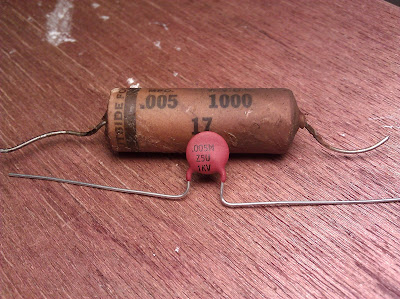 These capacitors have identical ratings – 0.005uF and 1000V tolerance. What a difference better manufacturing technology makes. The smaller physical size actually caused some mounting issues of its own, though, as the replacement component had shorter leads that required extending with a small piece of jumper wire in a few locations. 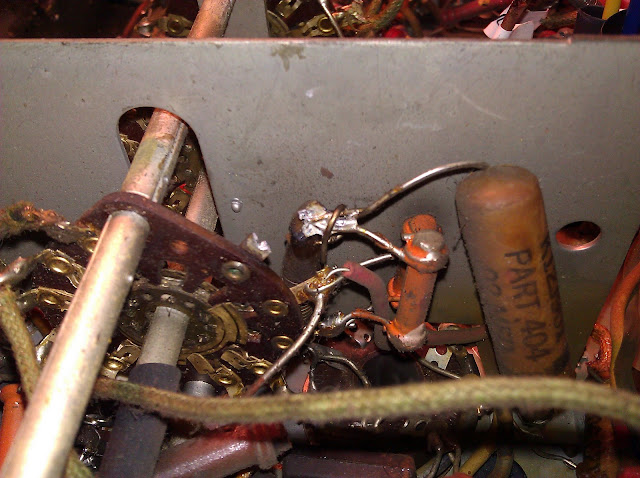 Naturally, it was bound to happen that something else would break during this process. I heated this joint with my Hakko to clear some solder, and the lug cleanly separated the instant I did so – it was held on by solder alone, it seems, the underlying metal having broken from thermal stress or a past workman’s abuse sometime during the last 69 years. Fortunately, very very fortunately, this is just a tie point – it’s not connected to the actual switching pads. I soldered a jumper to the rivet for physical stability and replaced the capacitor as normal. If this had been an active switching lug, this could have potentially permanently crippled or even rendered the radio unservicable. 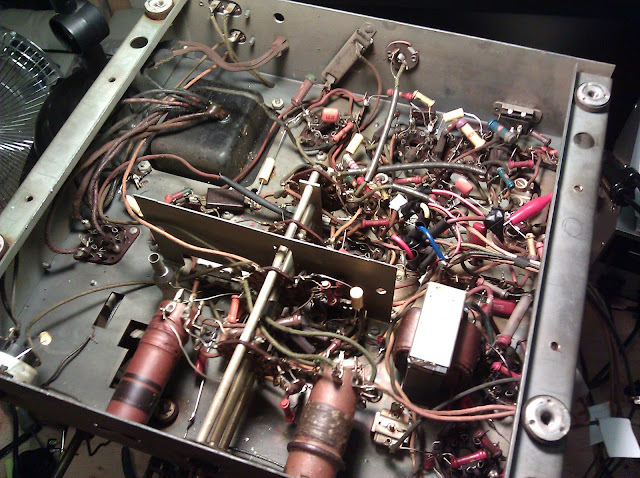 Finally, I reattach the rebuilt can capacitor. I ran the common to the can’s mounting lug, then a jumper from there to a near-by ground tie point and soldered the lug to the chassis, the wire to the lug and the jumper to the lug as well. This ensures a solid ground even in the event the chassis soldering didn’t  take very well. I ended up using my Hakko as a soldering iron in this case, as the thermal mass of the tip allowed it to heat the chassis to soldering temperature without cooling; the iron I use for adding solder to most connections is a thin point that cools too quickly when heatsinked.

I did a tube-less power-up to make sure there were no immediate shorts, such as a stray piece of solder, and found that the Beam of Light lamp was burnt out. Fortunately, I have #44 dial lamps on hand: 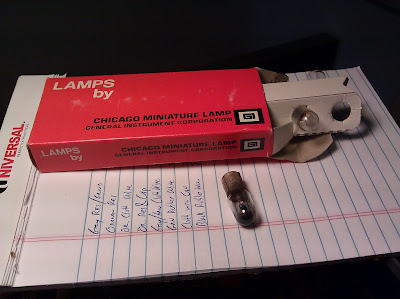 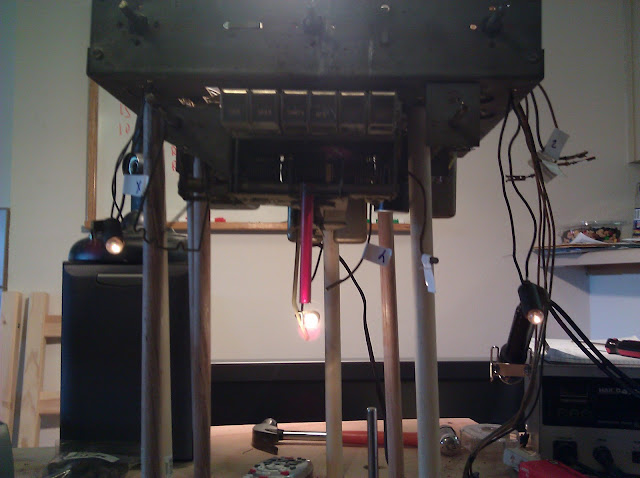 With the radio’s electrics fully serviced, now I can continue on to the first power-up just as soon as the tube I need arrives. Stay tuned!