I posted a while back about LED filament bulbs that use the new silicon-on-glass manufacturing process to produce Edison bulbs with thin strips of LEDs. Perfect for where you want that vintage styling of an incandescent bulb without all the wasted energy and extra heat. Since then, I’ve moved to replace nearly every one of my home’s light bulbs with various types of LEDs.

The results? Brighter, whiter, cleaner light that makes my living space look larger and neater – all while removing almost 100W of electricity which was going to generate nothing but extra heat.

I started exploring after one of my CFL bulbs came apart in its socket, leaving the mess dangling against the side of the light fixture.

My place is ridiculously well insulated, and the efficiency improvements for me are less about my energy bill and more about removing waste heat. Every watt of electricity that isn’t producing light turns into heat instead. A classic 60W incandescent bulb produces about 600 lumens of light output. The same light output in a compact fluorescent bulb consumes around 18W (with 42W per bulb of heat removed from the environment), and an LED or LED Filament bulb puts out the same amount of light for around 10W.

There were three main places I replaced CFLs with LEDs: in the bathroom vanity and fan fixture, in recessed lighting in the bedrooms and hallway, and in a number of desk and floor lamps. LED light bulbs come in several styles which are appropriate for different installations.

For the visible bathroom fixture lighting, I went with the new LED filament bulbs. These are available in quite a few places these days, even turning up in my local Home Depot. Japan and Taiwan, led by their research into semiconductor manufacturing techniques, were the first to develop these bulbs but manufacturing of less-expensive variants quickly moved to China. 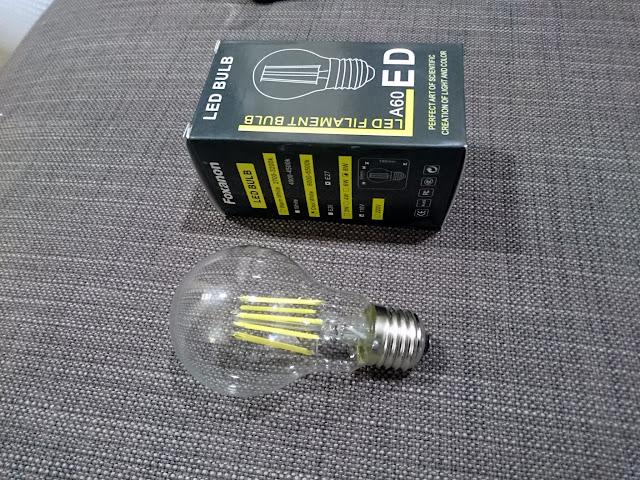 Reportedly, the Chinese bulbs use a cheaper resin over the LED strips which becomes brittle after a few hundred hours of operation (of an expected lifetime of around 20,000 hours) and can fracture when removed and re-installed or if they’re bumped in their fixtures. Not a problem for my application, but it is one thing to keep in mind if you’re thinking of installing these somewhere they might get roughly handled.

These seem to be the simplest designs – just a number of series combinations of printed LEDs forming a filament, 1W per filament, connected in parallel to achieve the desired light output. I picked up 8W bulbs, producing about 900 lumens at 6000K, or about as much as a 75W incandescent each. I’m a big fan so far, although these do strobe most noticeably; it’s visible in the steams of water coming from the sink and shower taps. The rolling shutter on my camera really picks it up too, but they look fine with human eyes. They’re warm to the touch but cool enough to handle even after running for a while, due to their low power consumption, and they’re filled with an inert gas to help with heat transfer. 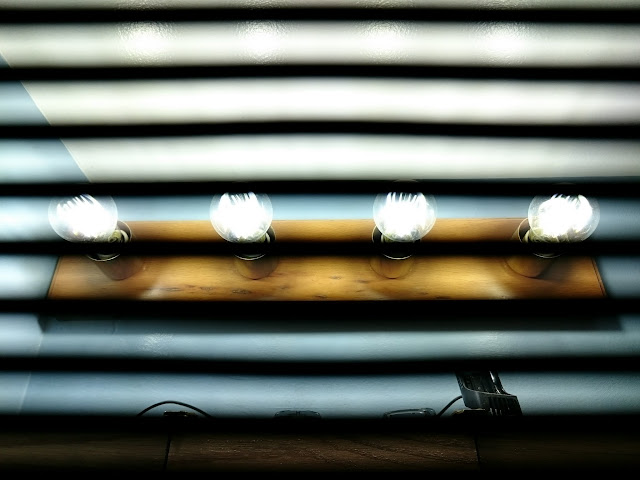 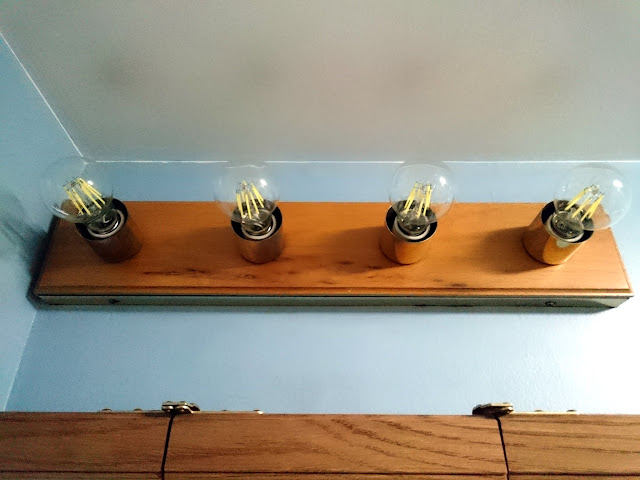 There’s a pretty cool “how they’re made” video on YouTube, too, that’s worth the couple of minutes it takes to watch.

These go for about $7 per bulb on eBay.

For the recessed lighting fixtures, I selected some LED flood light bulbs. These come in a ton of different sizes, styles, and color combinations and while I ended up with a physically smaller size than I expected, they put out plenty of light. These also came from eBay but many, many vendors offer bulbs in this style and they’re available at big-box home improvement stores, and even my local neighborhood hardware store if you want a name-brand like CREE or similar. 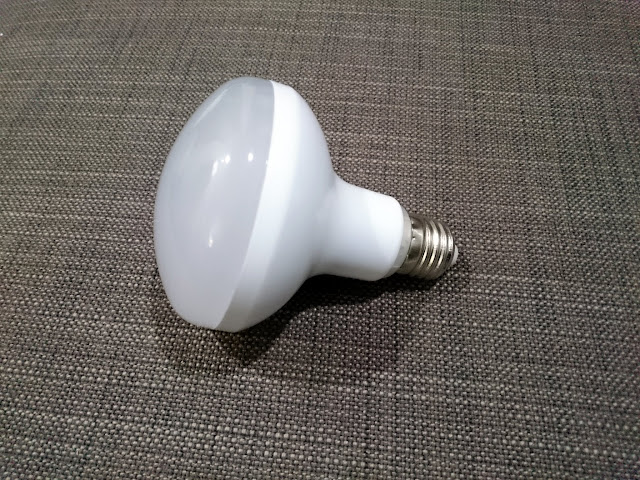 These bulbs are an interesting construction. There’s a pretty simple two-transistor power supply and a set of series-parallel surface mounted LED chips bonded to a substrate and covered with the diffuser

This gives them less flicker than the LED filament “Edison” bulbs, although the camera’s shutter can still slightly pick it up. 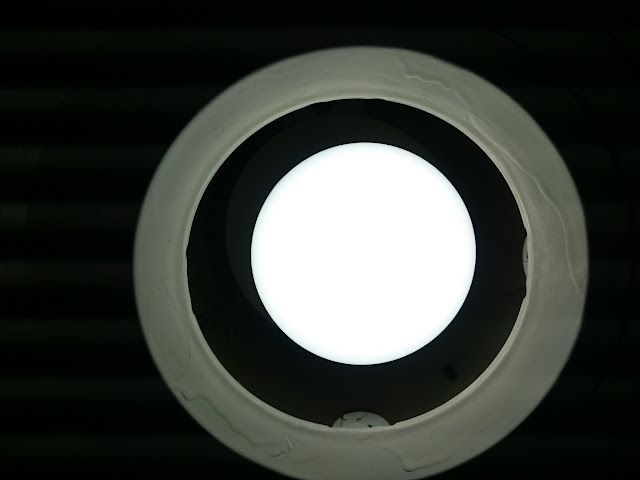 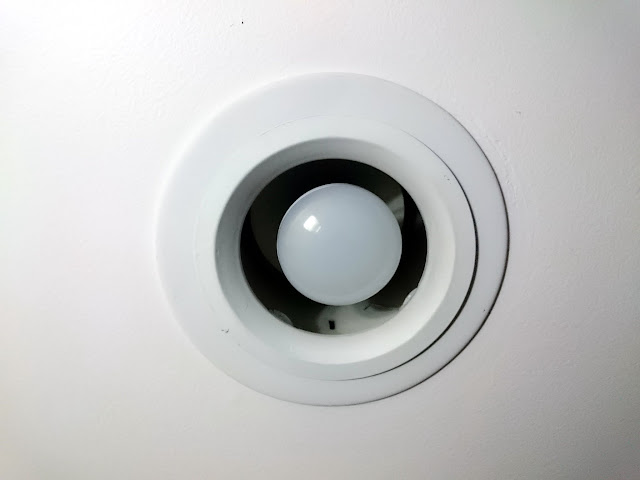 Finally, for my lamps, I selected another style of bulb. Most of my lamps seem to take E12 “candelabra” style bulbs, for some reason. Incandescent and florescent E12 bulbs are limited in their power output, mostly due to their heat dissipation, but since LEDs are so much more efficient there are many more options available. Moving to LEDs allows me to use bedside lights with brighter bulbs than they could otherwise take, and have a more aesthetic result.

Since these lamps all have lamp shades, I opted for some LED “corn bulbs“. 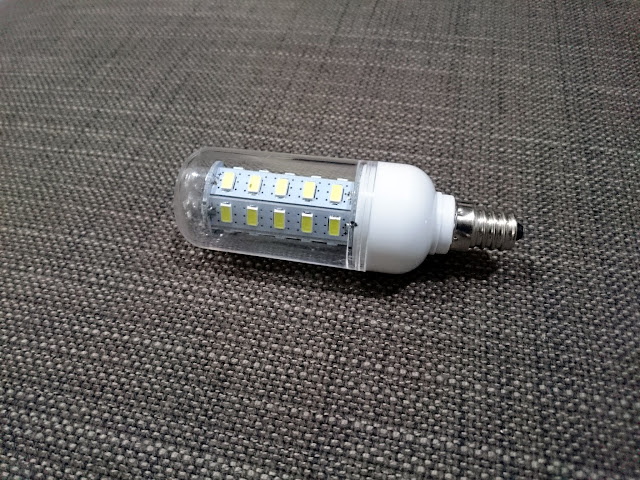 These are a simple arrangement of chip LEDs mounted in a circular stack and covered with a plastic housing. Light output varies widely – from these 7W models putting out about 600 lumens up through huge models putting out 6500+ lumens. These look very interesting, for sure, but kind of weird when exposed so I only used them inside of lamps with shades. They seem to have a simpler power supply, too, with the large amount of flicker. 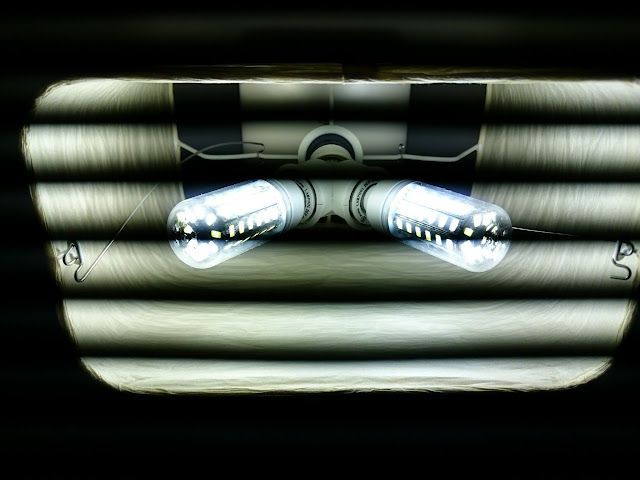 Shown here, I used an E12-to-E27 adapter, an E27 splitter, and a pair of E27-to-E12 adapters to fit two of these bulbs into a single socket for double the light output. I wasn’t able to find any E12 splitters, which was a bit weird. They look great in the lamps, though. 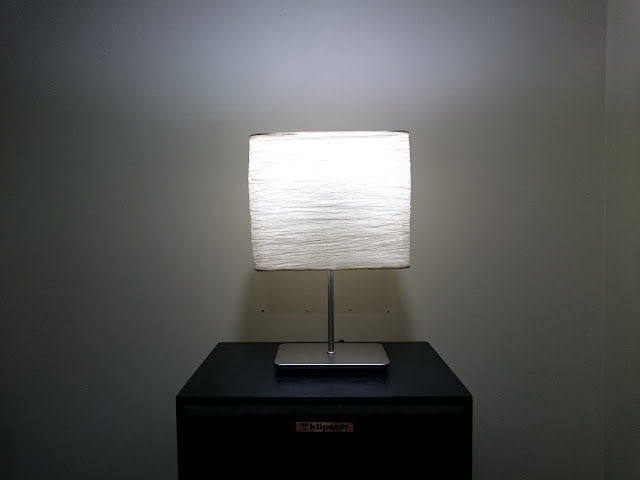 All in all, this has been a good upgrade. I’m satisfied with the light they produce, and in one of my most frequently used (and lit) rooms, the extra heat removal has translated to about a 2 degree decrease in the temperature so it’s more comfortable overall. Based on the energy consumption, it’s about $0.15 saved per hour that every single one of these bulbs is active simultaneously, or more realistically probably about $0.07 per hour. So, the payback in power bills will take a long time, but in addition to being cooler these won’t need to be replaced for about a decade barring an unexpected failure.

You might be eligible for incentives provided by your local electric utility for upgrading, too.

If you’ve been on the fence about LED lighting, don’t be. The technology seems to be in a pretty mature place. Give it a try!