Tube Numbering That Means Something

The RMA is seriously considering a new three-character system of marking radio receiving tubes which may shortly come into general use in place of the present meaningless type numbers. Easily grasped, the system makes it possible to roughly identify all tube types by their designations without resorting to complicated charts. A detailed description of the plan follows.

The first numeral is to be definitely related to filament, or heater, voltage.

The second character is to be a letter, arbitrarily assigned to distinguish tubes having the same filament voltage and same number of elements from each other. The first tube of a given type to be marketed will be classified “A”, the second “B” and so on. Thus a 24 would be a 2A5 while the later 35 would be a 2B5.

The third character is to correspond with the number of usable elements having external connections.

Following is a table which shows old and new designating numbers of standard receiving tubes. 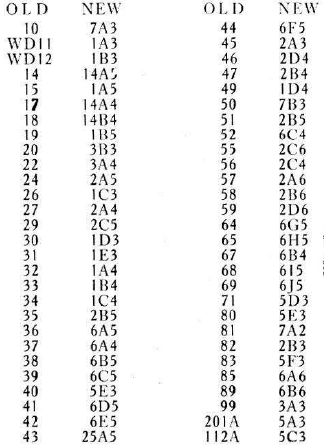 (It wasn’t adopted quite as described, though. For instance, a “6E5” tube – understood in the above chart to be a #42 power pentode, is actually an eye tube. Do not use the above chart as a tube substitution reference.)

Here is a circuit diagram of a 175 kc. oscillator used in my shop. It employs a type 30 tube and is completely encased in an old brass shield taken from a battery radio. Batteries could have been external, with the leads to the oscillator shielded. 22 1/2 volts is sufficient plate potential for a strong signal. 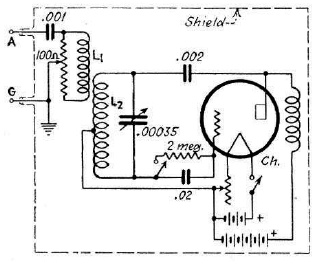 The main oscillator coil, L2, is wound in the slot of a wooden form having the dimensions shown in the attached drawing. It should consist of exactly 196 turns of No. 21 s.c.e. wire wound 14 turns to the layer, tapped at the 98th turn. The pickup coil, L1, is 14 turns of No. 21 s.c.e. wire basket-weave wound to 4 1/2 inches in diameter, squared off and fitted around the main coil. A coil wound haphazard fashion in the hand, securely tied with string, will do if basket-weaving forms are not available.

To calibrate the device I selected a superheterodyne known to have accurate dial calibration. The oscillator was connected to the input circuit of this set and the receiver tuned to exactly 875 kc. Then the oscillator dial was rotated until it produced the loudest possible signal.

The device may of course be used to generate signals within the broadcast band of frequencies by selecting the proper harmonics.

Several makes of automatic record-changing phonographs employ a liquid mercury switch of the tilting variety as part of the changing mechanism. These frequently become cracked, allowing air to seep through the glass and foul the mercury.

To replace these switches where the time required to secure delivery from the factory cannot be spared secure a small pillbottle having the same dimensions as the original switch tube, a rubber stopper and two ordinary sewing needles. Fill the bottle about 1/4 full of mercury, insert the stopper as tightly as possible and then push the needles through it as far apart as possible. Solder flexible leads to the protruding eyes of the needles and then coat bottle and needles with molten wax.

Fasten the completed unit to the switch tipping frame in the same manner as the original mercury unit.

To remove contrary tuning and adjusting knobs of the slip-on type take a piece of heavy cord about 9 in. long and tie the ends together, forming a loop. Now tie a knot approximately in the center of the loop, thus forming the cord into two loops.

Slip one loop behind the knob and the other on your fingers and pull. The knob will come away without damage to either finger-nails or cabinet.

An old B-eliminator may be quickly and cheaply converted into a device for obtaining high d.c. potentials from a 6-volt storage battery. The same device also provides high a.c. potentials which are useful in the shop.

Disconnect the 5-volt filament winding which normally heats the 280 rectifier and short the two socket filament terminals together as shown in the accompanying diagram. Leave the high positive lead to the filter circuit untouched. Plug a BR rectifier into this socket. 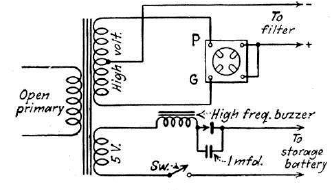 Number 13 Mazda focussing 3.8-volt flashlight lamps work out fine where 2.5-volt pilot lights repeatedly burn out due to excess voltag.e They are also handy when 2.5-volt bulbs are not immediately available.

If shellacking a cone and centering its apex fails to remove objectionable rattle press the rubber of a lead-pencil firmly to the extreme edge of the cone where it is clamped or glued in place. Try the pencil pressure on top, bottom and sides, being careful not to press so hard that the cone is damaged, until a point is reached where the rattle ceases.

If the cone is glued, smear shellac heavily between frame and cone at this point and let it try. If it is clamped, loosen the clamp enough to permit the insertion of a small soft-wood shim.