I just had a great stereo receiver through the shop for repairs, the Marantz 2270. It’s the big brother to the Marantz 2245 I had through the shop a little while ago – mostly the same front-end circuitry, but with the addition on a multipath indicator to the FM tuner, and of course different final amplifiers. 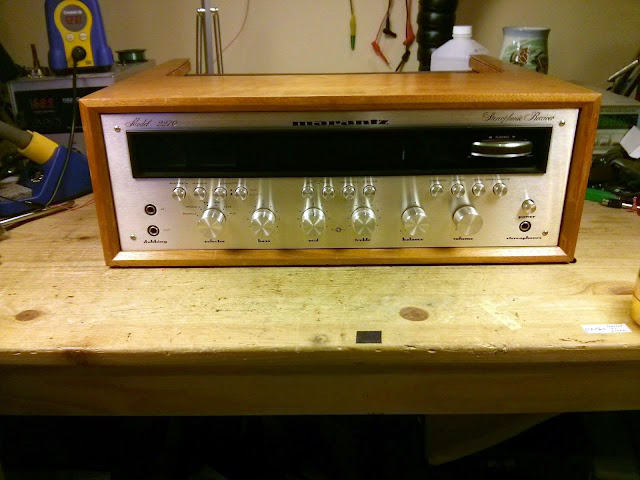 This is a very early example, serial #3593 from the beginning of the production run. It was designed in the USA and manufactured in Japan. 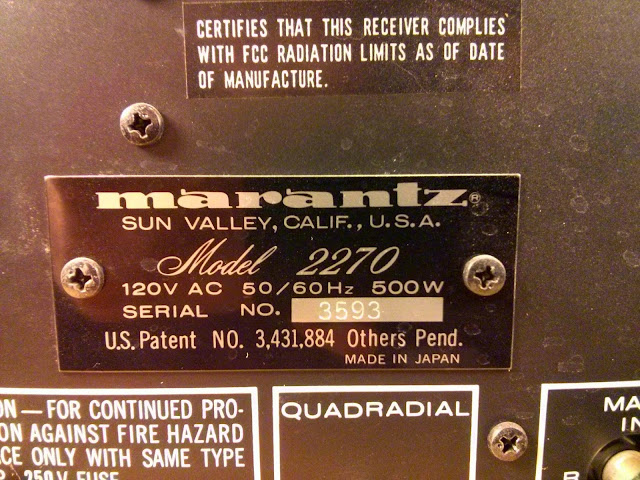 These receivers were really built incredibly well. They’re easy to work on, for the most part, and delivers a lot of power with very low distortion: the 2270 is rated for 70W per channel into an 8 ohm load < 0.3% distortion; the FM section is very sensitive and selective, too. 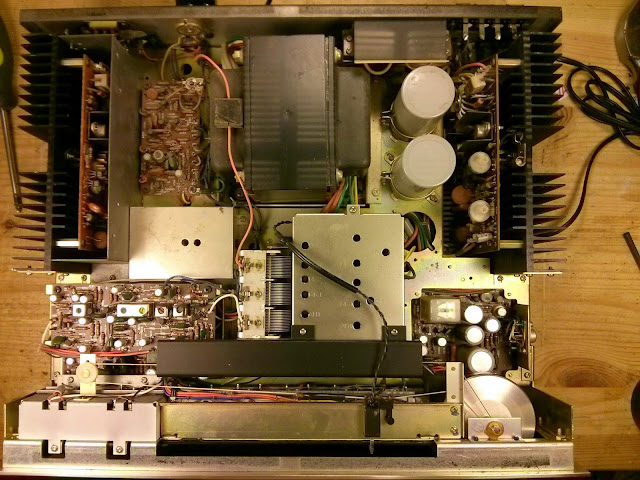 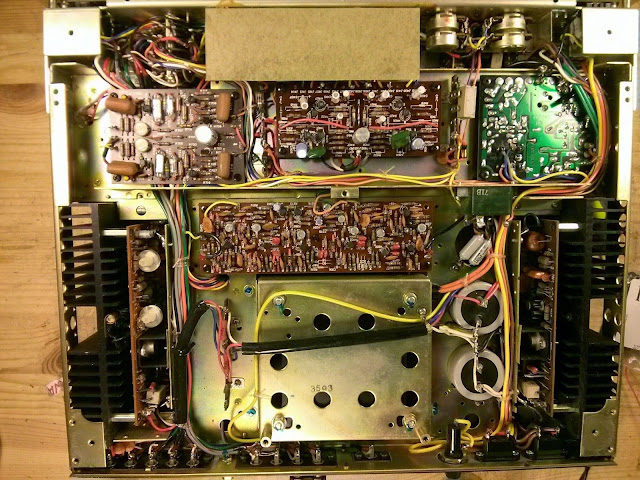 This receiver came into the shop working “okay”. There was a lot of distortion in the FM, and overall it sounded muddy and a bit thin. The original capacitors were going south but fortunately nothing had catastrophically failed so it would clean up very nicely. I started off replacing the regulated power supply capacitors and adjusting the power supply. After each board repair I like to power it back on and verify each subsystem, so this made sure nothing would go wrong while doing the rest of the receiver. The board-mounted electrolytic capacitors were replaced with top of the line Nichicon Fine Gold audiophile capacitors; the chassis mount capacitors with slightly up-rated Kemet caps. 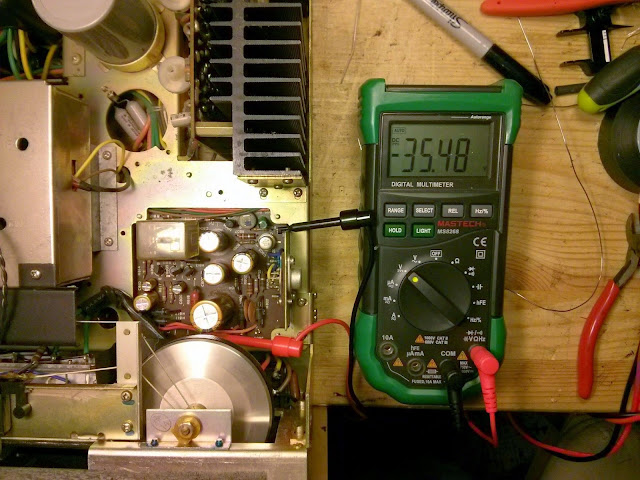 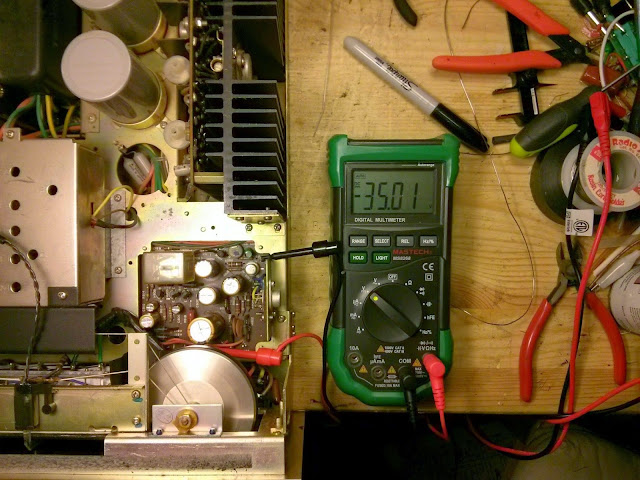 There’s only one cap on the phono pre-amp board: 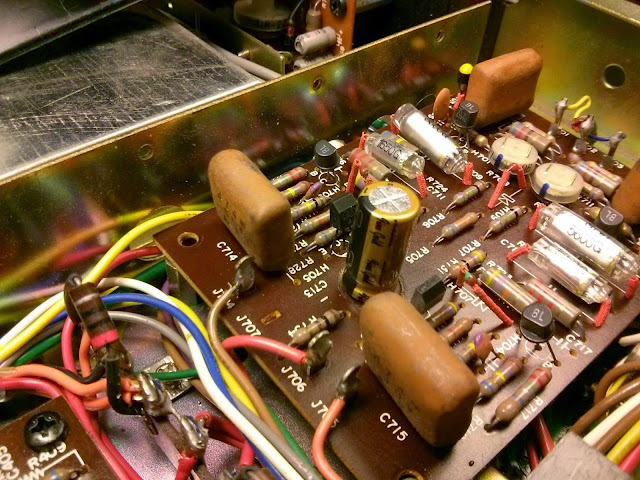 Next, onto the tone board where I cleaned and lubricated all the controls: 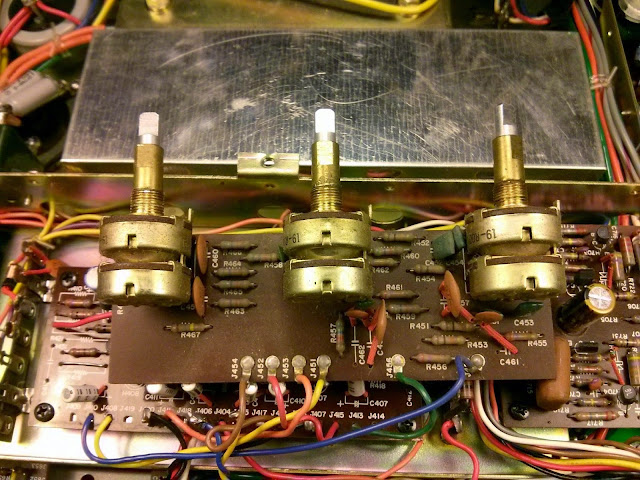 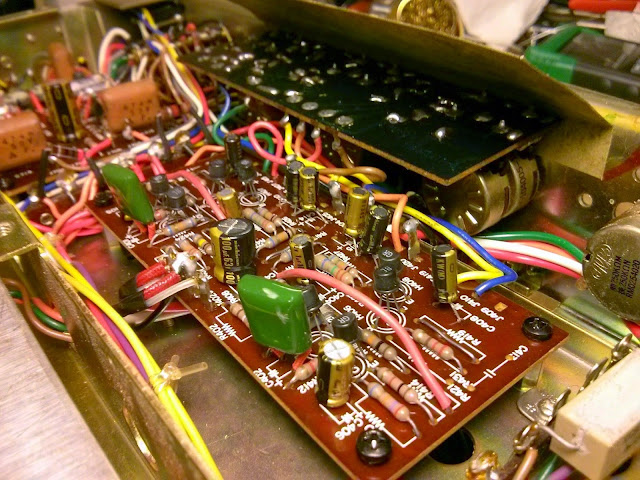 The FM discriminator on this one had 6 more electrolytic capacitors, and an old school TO-5 style IC – actually the only IC in the entire unit. 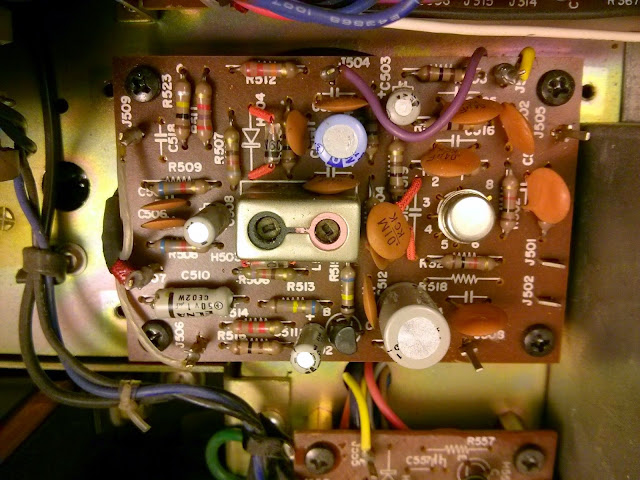 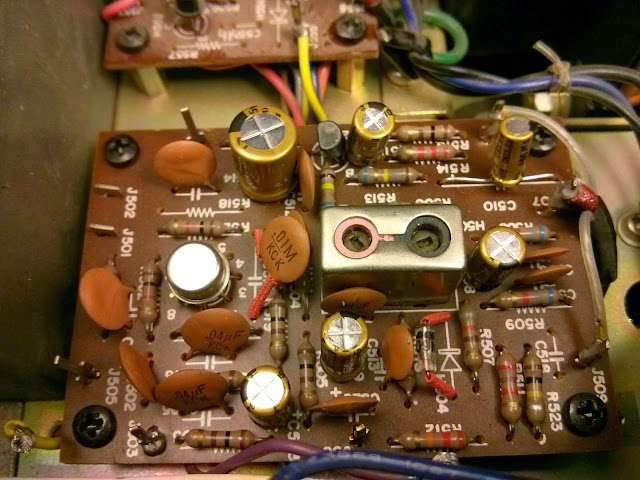 The AM board in this receiver is mounted above the FM stereo demodulator. 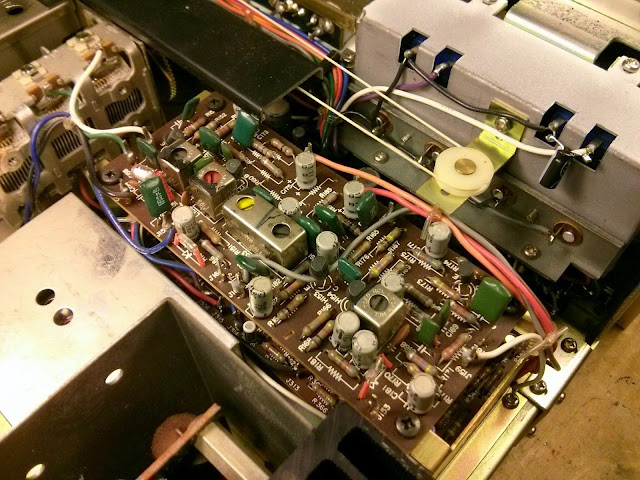 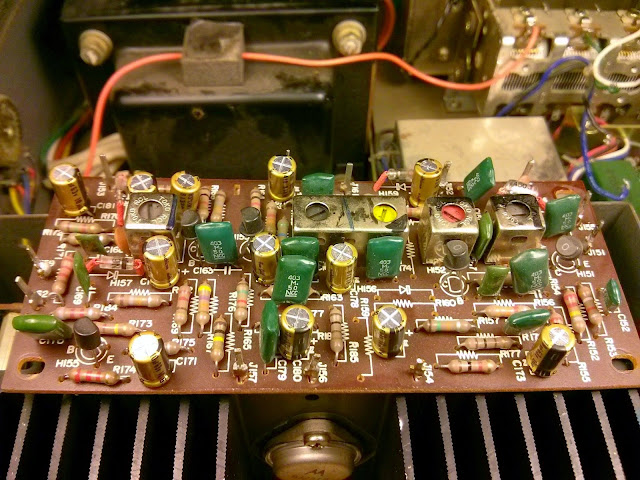 Underneath, the stereo demultiplexer board got the same treatment: 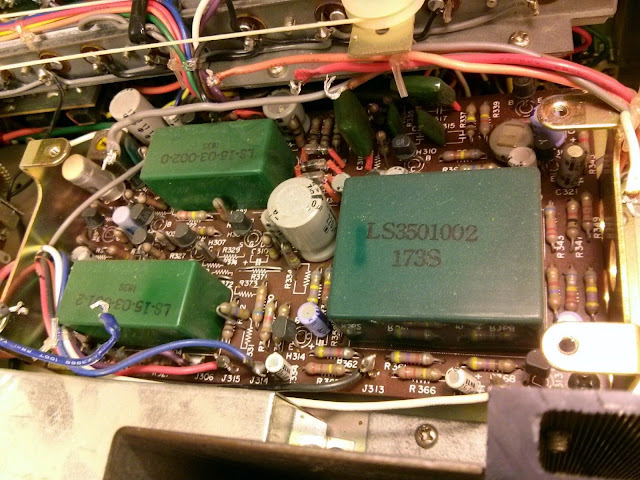 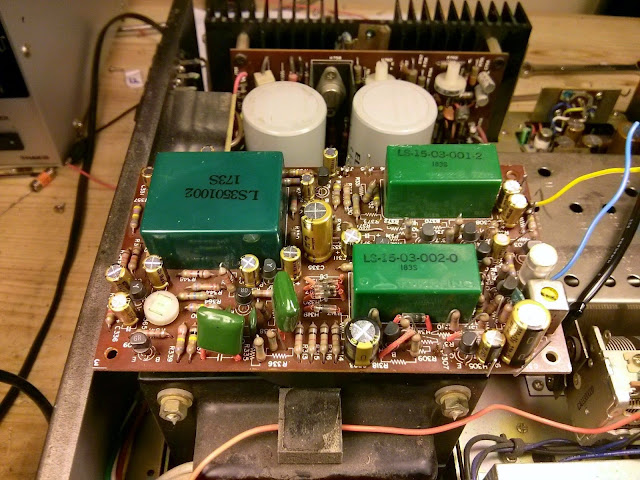 This receiver had a major repair at some point in the past. One final board was original; one was from a much later 2270. Most likely something failed back in the ’70s and it was replaced under warranty. 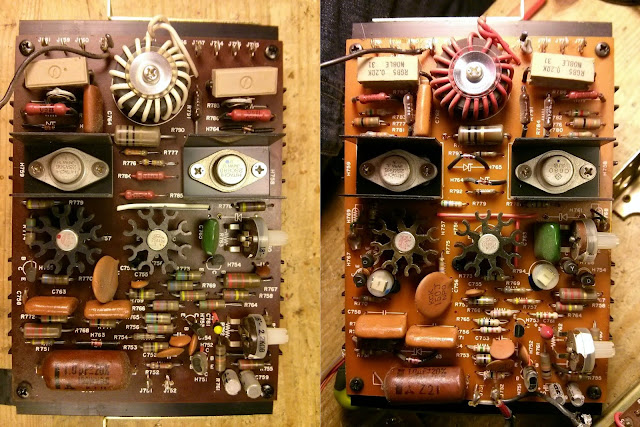 Each final amplifier only has two electrolytic capacitors to replace: 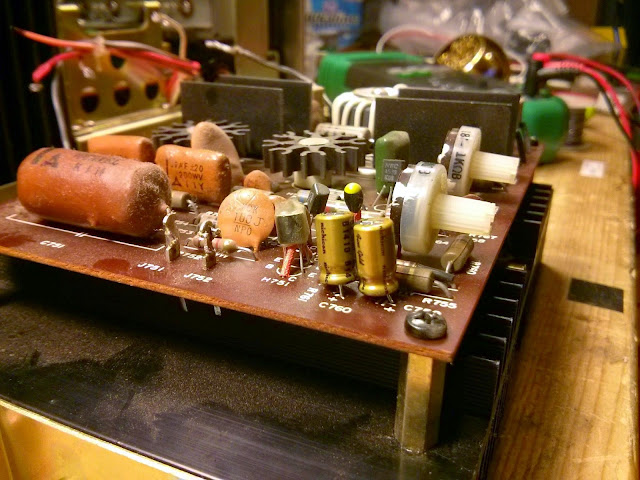 Finally, it was time to check it all out! I started with adjusting the bias and DC offset to ensure the amplifiers would perform up to spec for the rest: 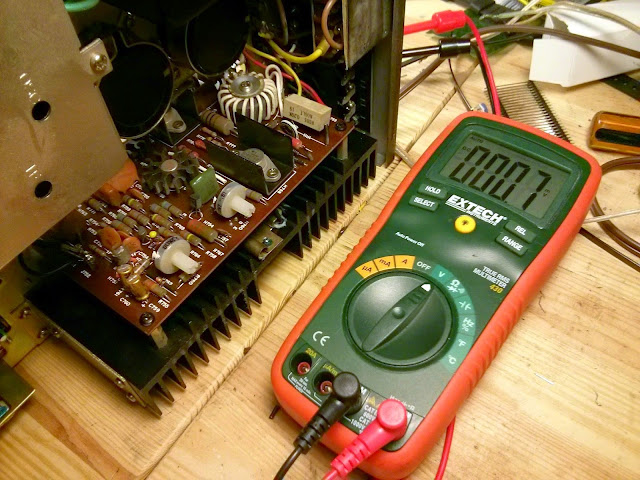 , then proceeded through the RF alignments: 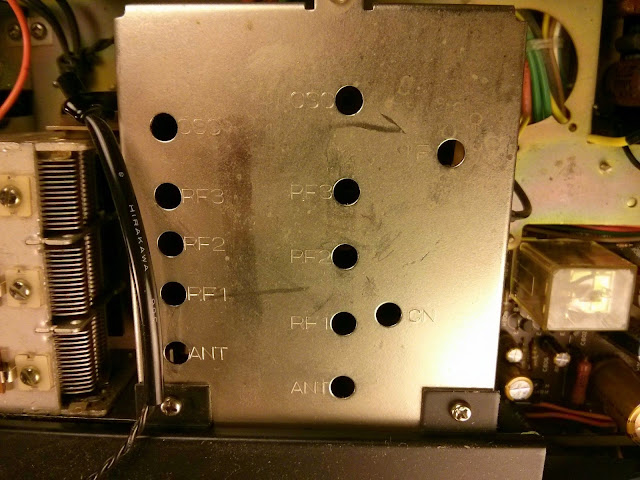 The FM receiver was definitely out of spec. The dial alignment was correct but the distortion spec was very bad. 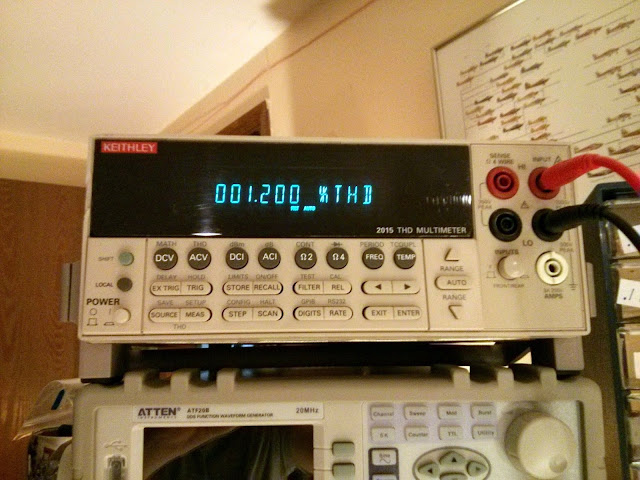 After 11 adjustments for FM, the distortion vanished: 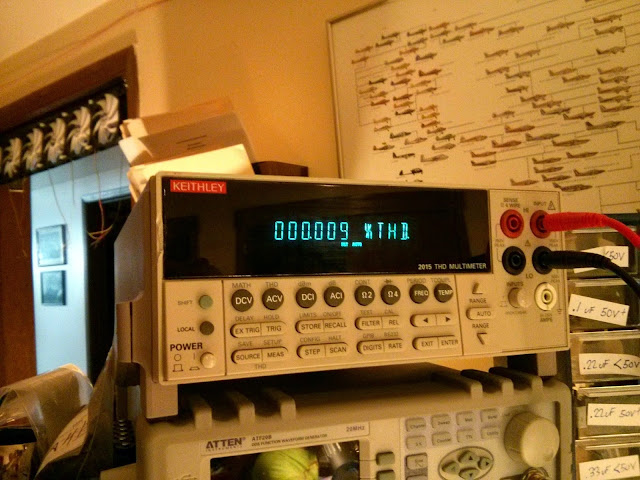 I measured the power and distortion of the amplifier through the line input, too. This receiver was able to produce a bit over its rating, with 96W output at 0.25% THD. Not bad at all! 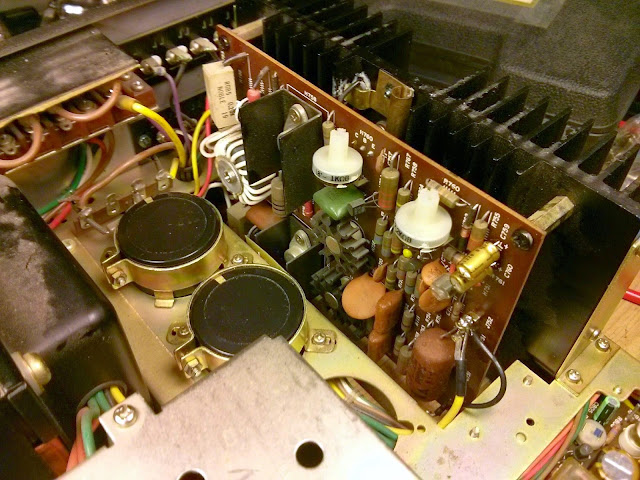 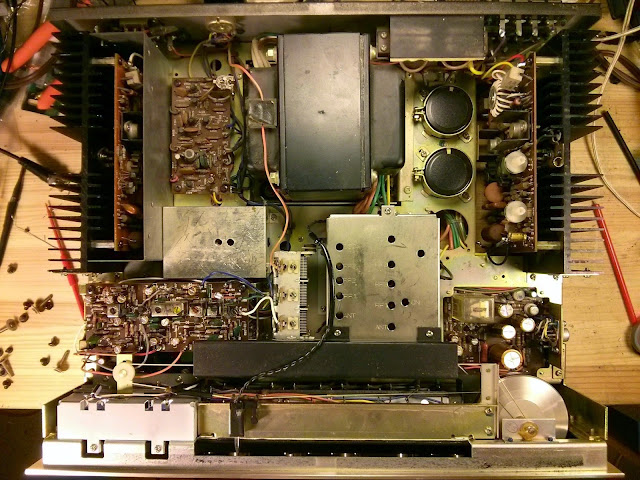 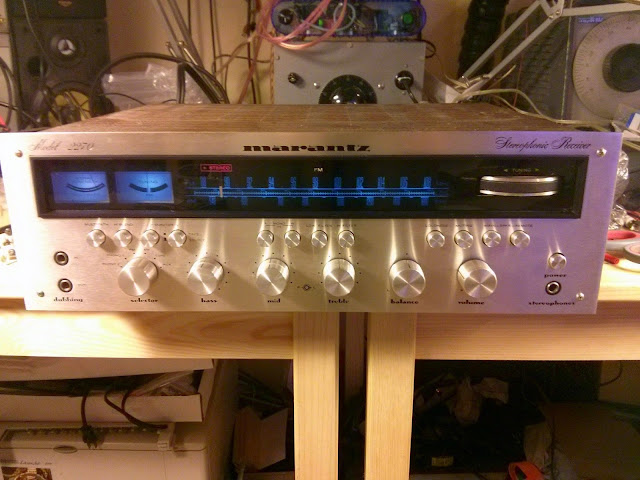 This receiver is fantastic. It’s cleaned up perfectly and now it’s performing better than new. Should last for a long time, too!