Dial strings are, quite frankly, about the worst things in the world. They’re usually a complex and finicky mechanical system parked right in the middle of an otherwise straightforward electrical project, and if a string breaks good luck getting it back together again in all but the simplest of dial string arrangements. And they break easily. On older, tube gear the dial strings have often worn out and snapped with age and friction. On newer gear, the dial strings have often been snagged on the case at some point during a previous repair attempt, or even worse, they were accidentally nicked with the soldering iron and burnt or melted apart.

That’s a problem which has happened to me quite a few times, even with a steady hand and the best of intentions. After spending many hours re-stringing the dial on a 1970 Toshiba tabletop transistor radio after my soldering iron caused it to snap where the string passed very near the amplifier PCB, I was inspired to come up with a solution that’s a bit more reliable than “just be more careful”: copper shielding tape! 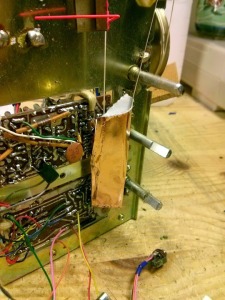 Copper shielding tape is an extremely important part of an electronics test bench. It’s very handy to shield a sensitive part of a circuit from electrical interference, but also, it can shield from thermal interference as well! In this case, because the copper foil is a thin piece of metal with a high melting point, the soldering iron brushing up against the foil won’t damage the string under it, and won’t heat it up nearly enough to cause damage to anything underneath for a short tap. This is the perfect solution to the problem of dial strings snapping when trying to solder too close to them. Copper shielding tape can be soldered, so it’s perfect to provide some protection against an errant soldering iron. A small 2″ section wrapped around itself with only a small section of the adhesive removed to form a cylinder was all it took.

Copper shielding tape is extremely useful to have around. It comes in a variety of styles, but I’d recommend one that’s about 2″ wide and has a conductive adhesive so it can act as a shield without soldering as long as it’s touching a metal chassis somewhere. 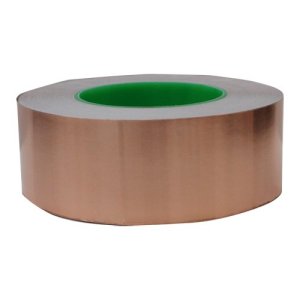 as I use this while repairing Bose equalizers and stereo receivers, but it comes in other sizes. A five-foot section ($15.95)

If you try this out yourself, let me know how it goes!