At the risk of becoming a test equipment collector, I am picking up a few pieces of vintage test equipment that need some work, but will be very useful pieces of shop gear as well as interesting pieces of history lately. I’m needing a high speed analog X-Y monitor for some more complex alignments, and this old HP 143A oscilloscope came up on the local Craigslist for only a little more than the cost of the gas to drive and pick it up. 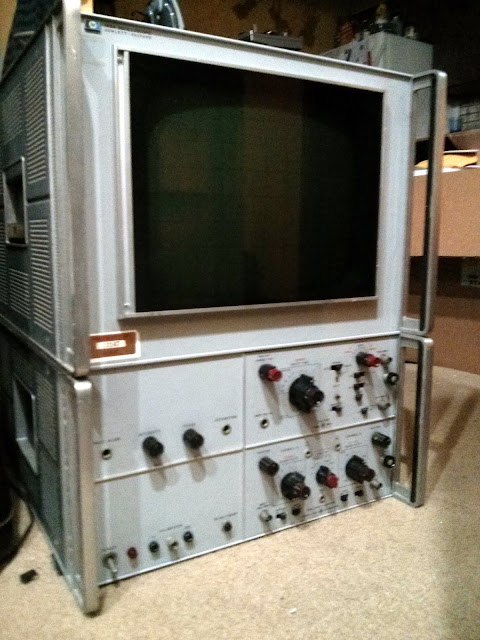 This is a really old school, transitional piece of gear. The CRT and mainframe assembly boasts all-transistor design, but the plug-in modules themselves are a mixture of tube, transitional nuvistor, transistors depending on the circuit position and the module’s capability. 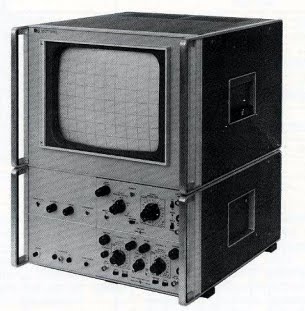 They’re fairly rare, too, from what I can figure. A high school student in a family of engineers has one; a gentleman who did happen to be local had one earlier this year, and one configured with spectrum analyzer plugins is for sale reportedly removed from a Department of Defense HF monitoring station – a true cold war relic. 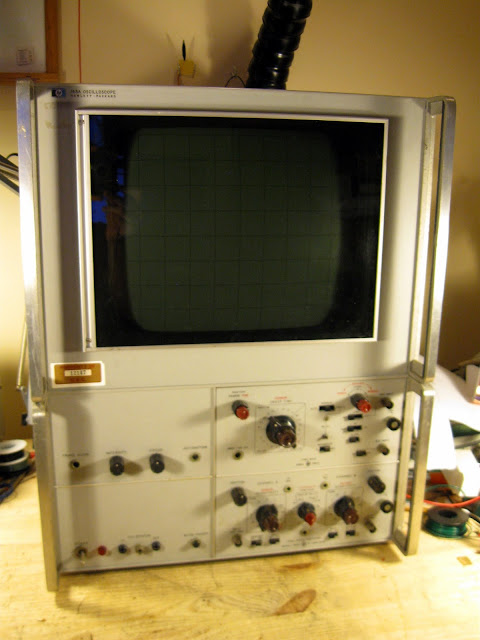 These wide-screen mainframes were a big ticket item back in the day, found in the HP scope catalog: 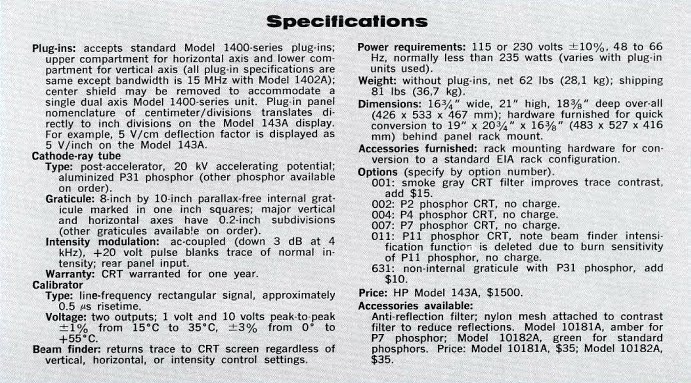 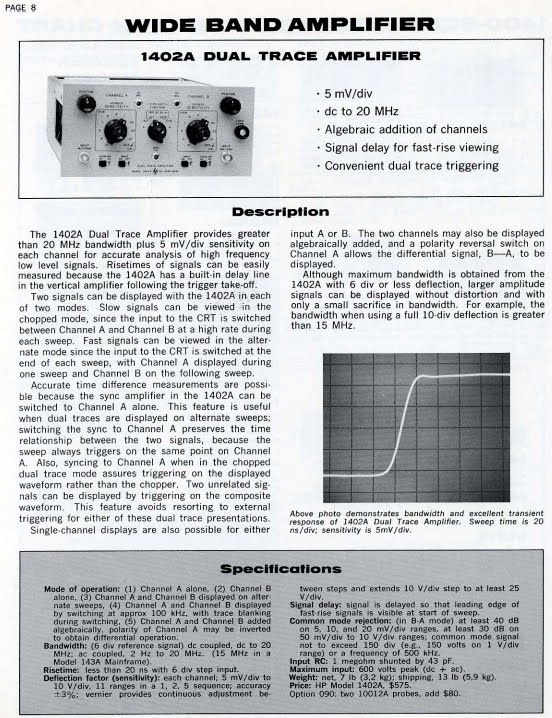 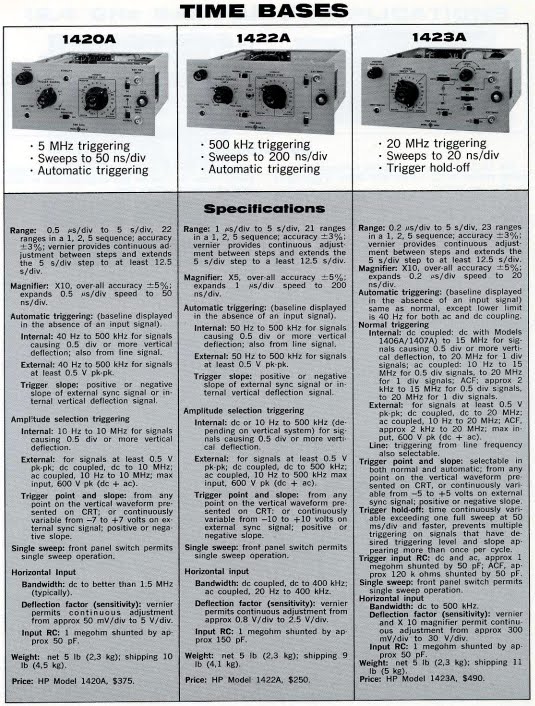 And the price only goes up from there! The mainframe supports some very high sensitivity (50 uV/div), differential, and high speed (GHz+) plugins – not to mention a frequency response generator, TDR, and spectrum analyzer that only go up get more expensive. 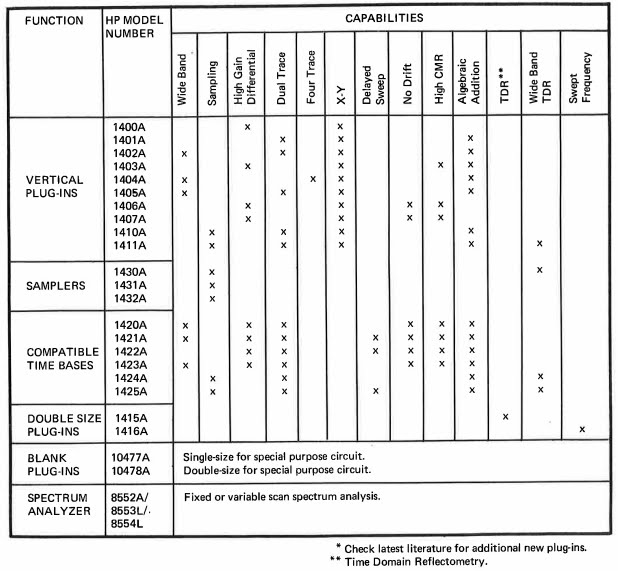 I’m lucky – all the knobs and switches are present. Those frequently get lost. 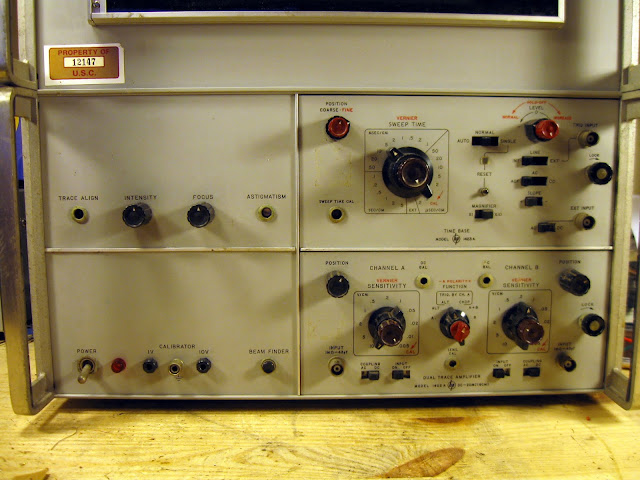 The HP Archive has good information about the scope including the operation manual and schematics. The plugins slide out easily: 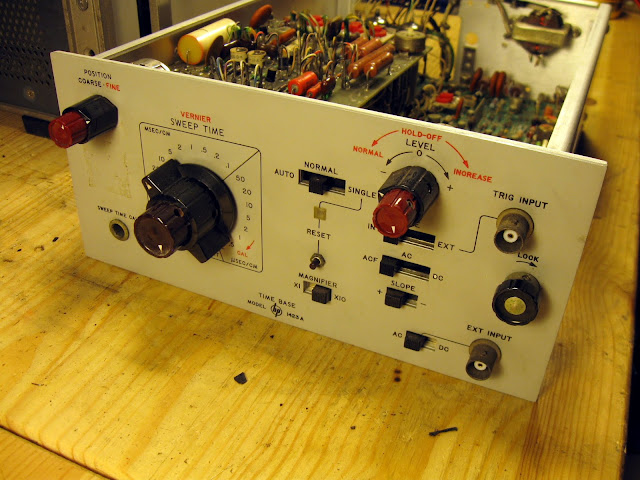 Inside the timebase plugin, lots going on. Transistors and nuvistors together on this double-sided etched and silkscreened board: 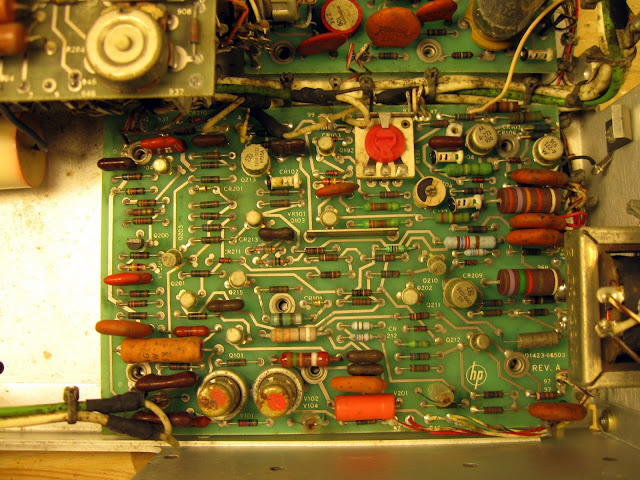 Tubes on the other side of the enclosure, right next to some TO-92 package transistors. 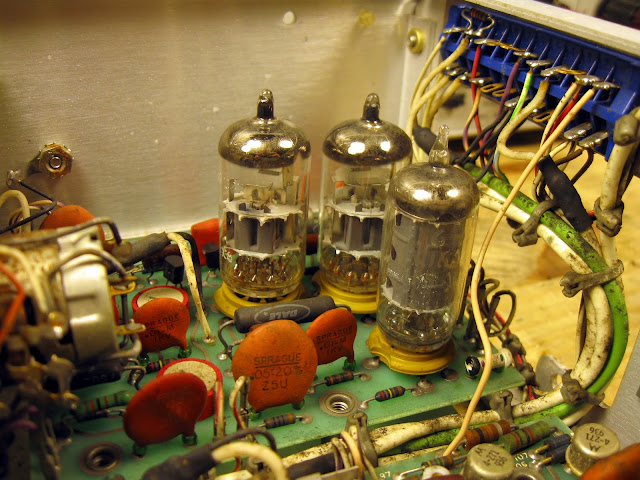 Nuvistors were a very late-game evolution of the vacuum tube, and arguably held off the full transistor revolution for a few years. 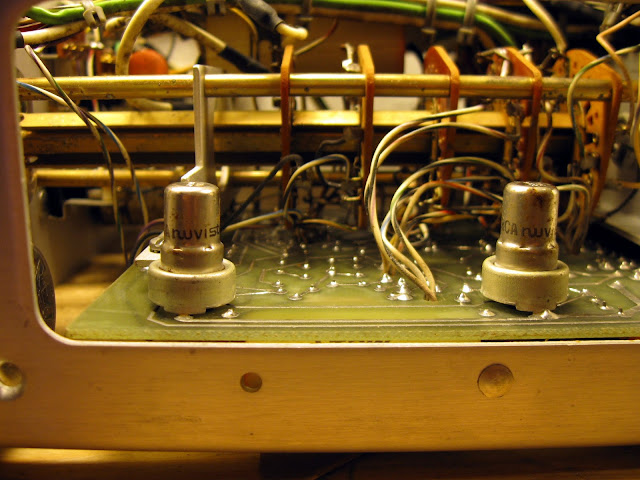 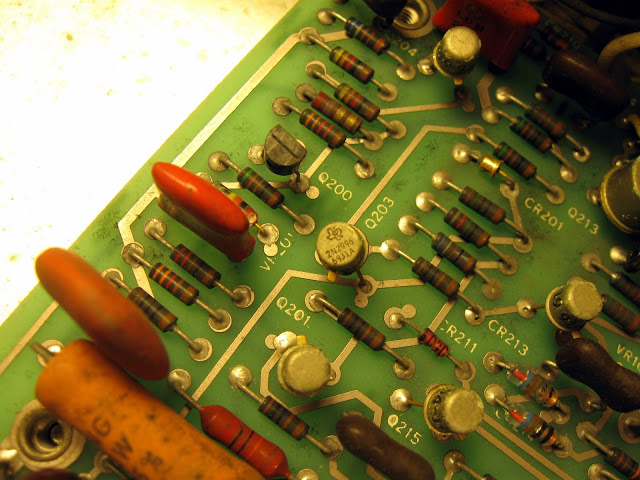 This mainframe powers on successfully but doesn’t show a meaningful trace; it’s got some minor damage inside but should come back together nicely. 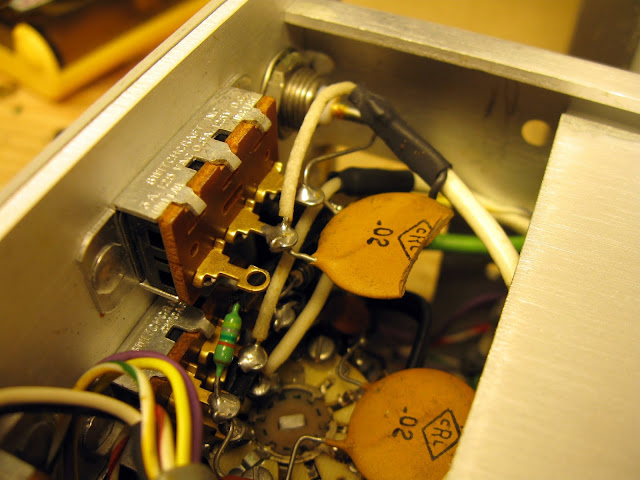 The vertical amplifier is pretty interesting inside, too: 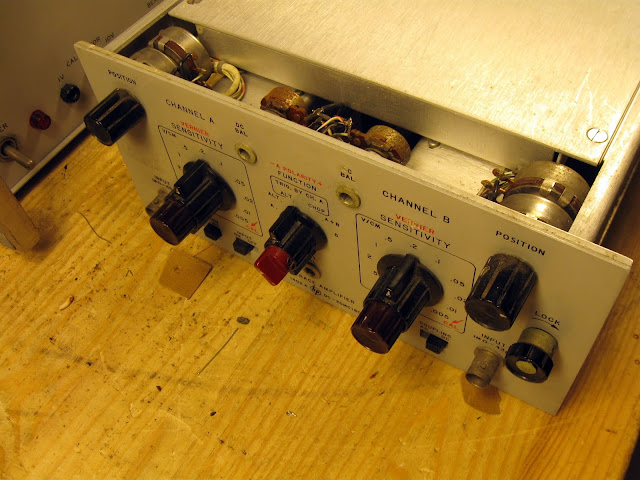 This one has a mix of transistors, noval miniature tubes, and compactrons. 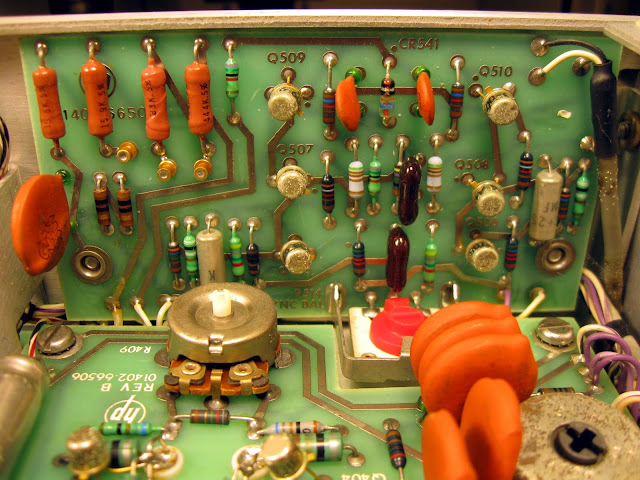 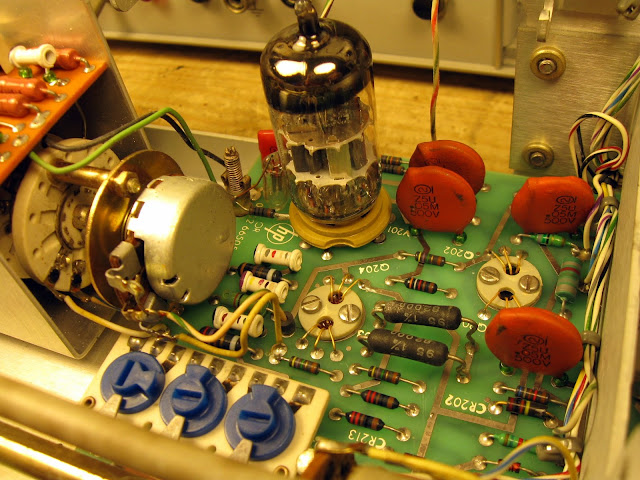 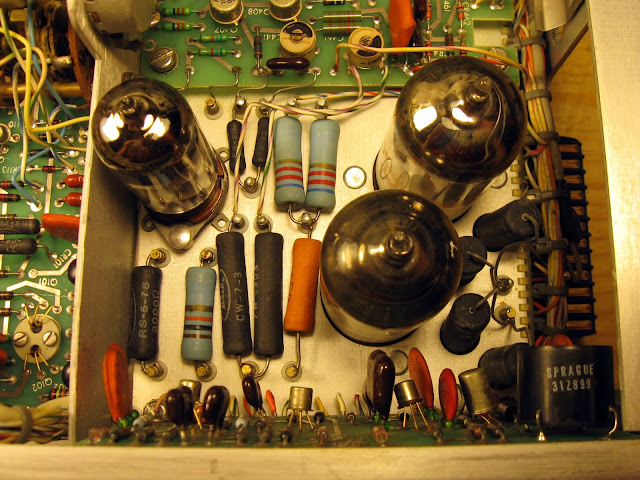 I’m looking forward to getting this one going again, but doubt I’ll be able to work on it before the end of the year. 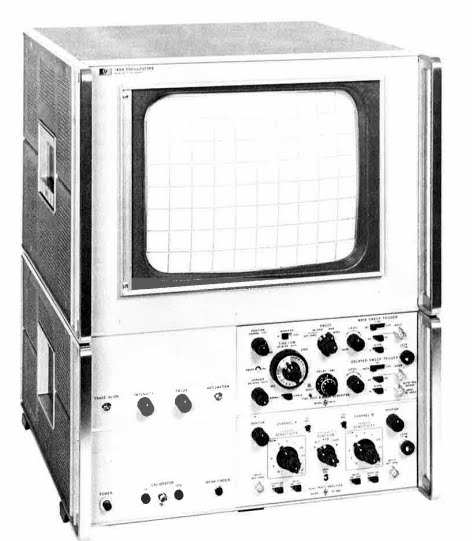 Because this mainframe has identical vertical and horizontal amplifiers, the way to make it into an X-Y display is to use “vertical” amplifiers in both bays. If you have an HP 1402A plug-in for sale (or really, any other 1400-series HP plug-in), I’d love to hear about it.