A local client just brought in a very interesting Zenith tabletop radio from just after WW2, the 1946 Zenith 6-D-029 Consoltone mantle radio. This is one of the iconic “boomerang” dials Zenith produced for a couple of years after the war. A variety of sets were made with similar styling; in this case the 6-D-029 is a 6-tube AC/DC radio with a combination of octals and loctal tubes. 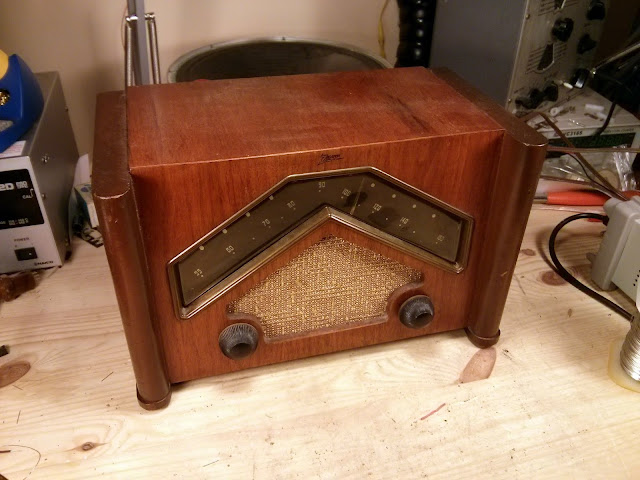 This radio was repaired in the ’90s by a radio shop in Portland, OR but came to me in non-working condition. That’s not unreasonable for a radio to need another round of service after 20 years, and it looks like they did good work last time.

Checking out the tubes, other than one which was conveniently labeled (and testing confirmed) “weak”, they all had good filaments and good emissions. Something else was clearly the problem. Given the set’s owners don’t own a tube tester, the tube labeled “weak” must have been from the last time the radio was serviced; this one was the RF amplifier front-end tube. 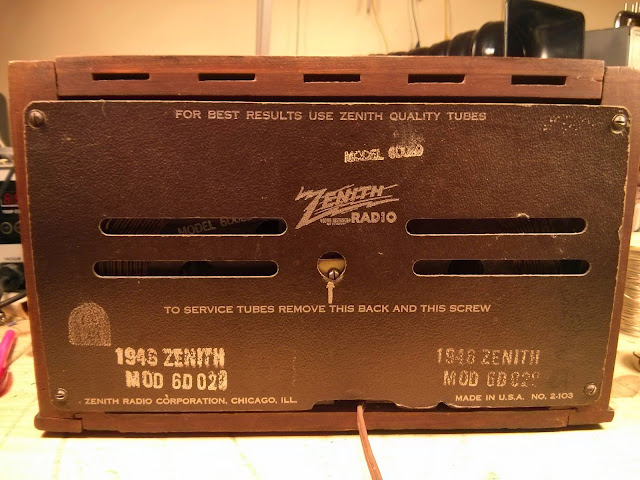 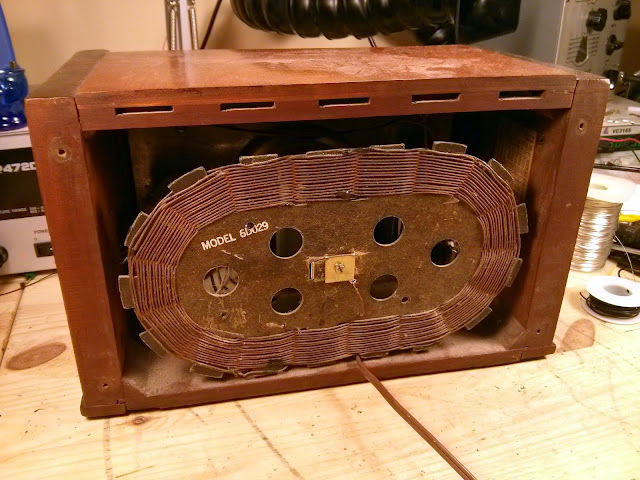 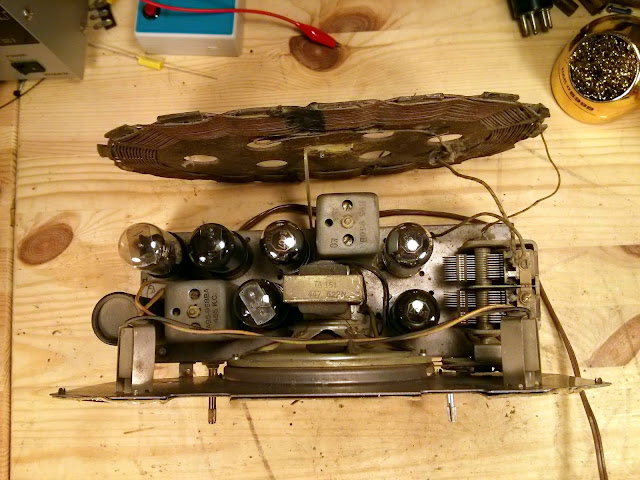 It’s been pretty well cared for – the cabinet is in solid shape and there’s only a tiny amount of dust inside. Underneath, however… 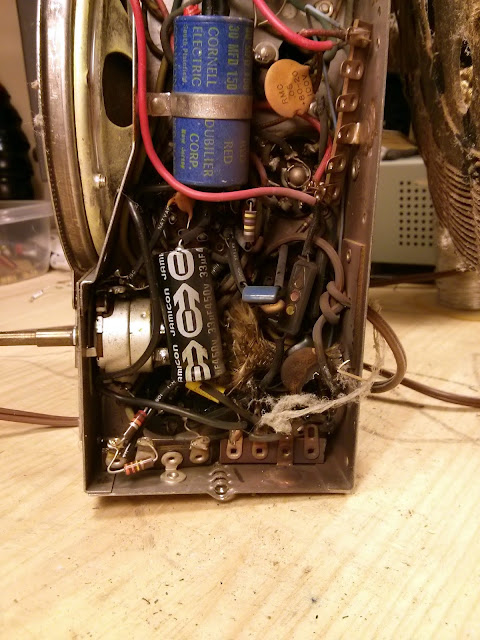 There are several things going on here. Number one is somewhat obvious: something has released some smoke inside. In addition to that, the electrolytics used in this repair were different ages. There’s the blue CDE dual-section capacitor, and a Jamicon 33uF 450V capacitor hooked up as the second filter. Time to start pulling parts. 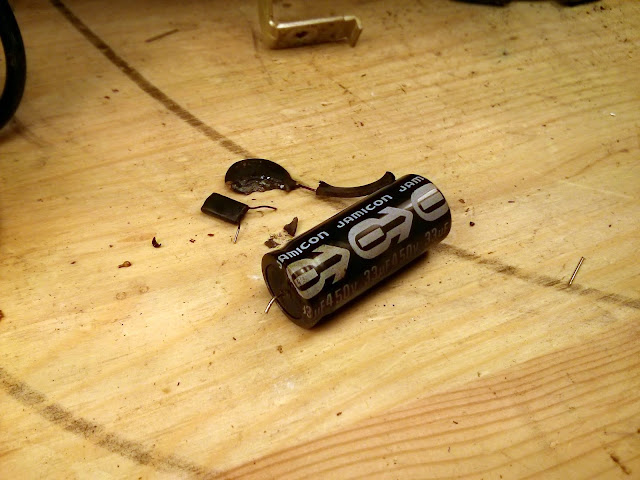 That Jamicon capacitor is visibly bulging from one side, and testing confirms it’s definitely dead. Of the CDE dual cap, one section was badly out of spec, and the other section tested open as well. 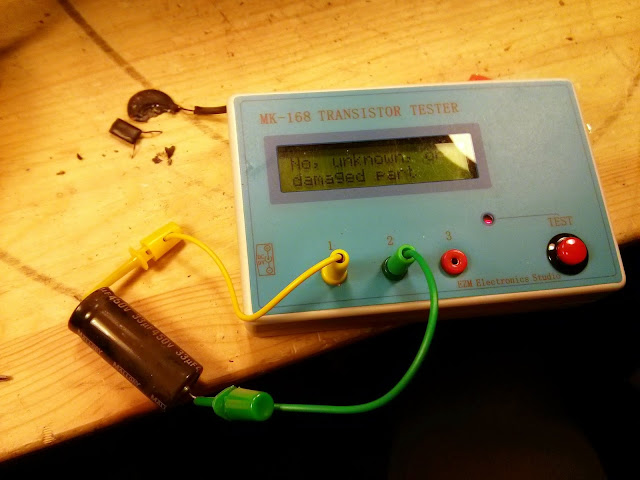 One of the ceramic disc capacitors blew itself apart – rather violently damaging a mylar capacitor near-by and generally making a mess of things. I replaced all of the same model of capacitor with new 630V film capacitors just to be safe. 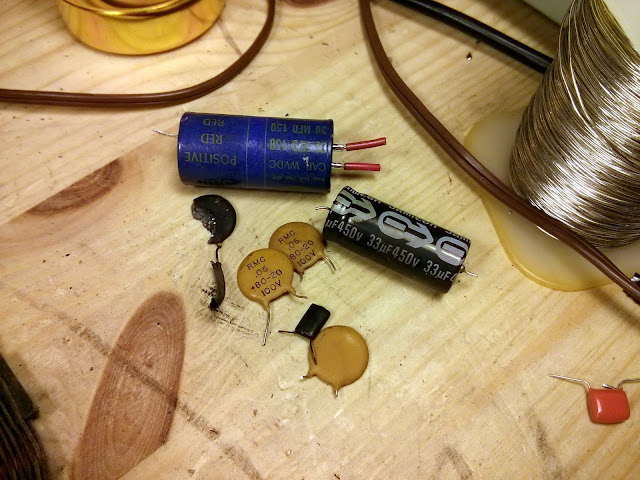 After replacing the components it was time for the first power-up. No smoke! But, no sound either. Checking around on the voltages, something wasn’t quite right. B+ on the output tube was about 50% high, and there was no voltage on the screens of any tube. 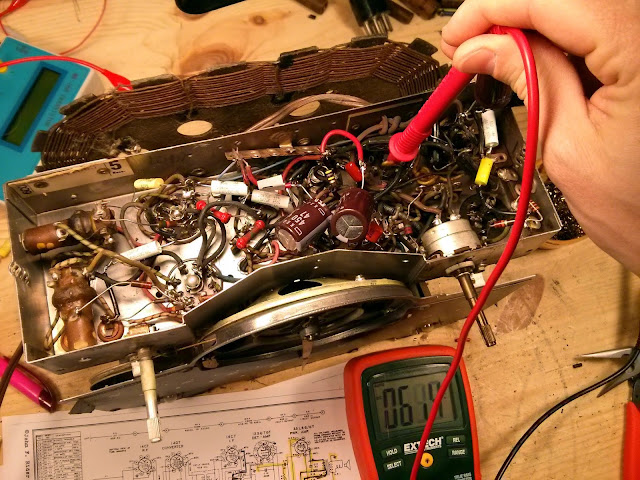 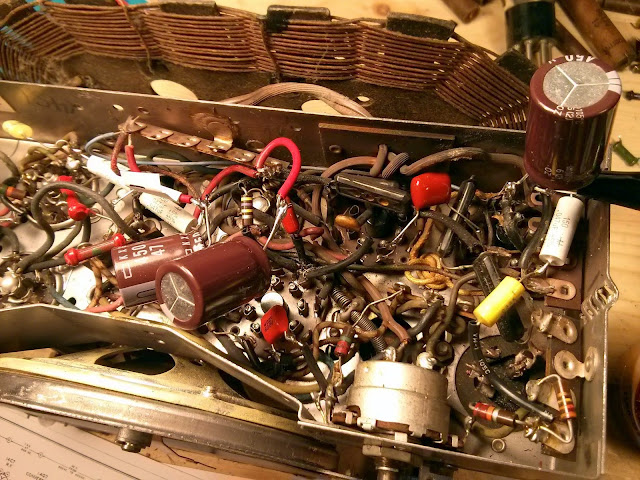 Careful inspection and wire tracing got to the root of the problem: the wire between two tie points, supplying high voltage to the screens of the output tubes and the plate and screens of the RF and IF tubes, had broken at some point – likely from 68 years of metal fatigue. This was likely the root cause of the original failure: the ceramic disc capacitors were rated at 100V. With 4/6 tubes not conducting, the power supply was delivering over 160V when the nominal operating B+ was about 100V under load. This is well over the rating of those ceramic capacitors and could have caused the violent failure which took the radio out of service. 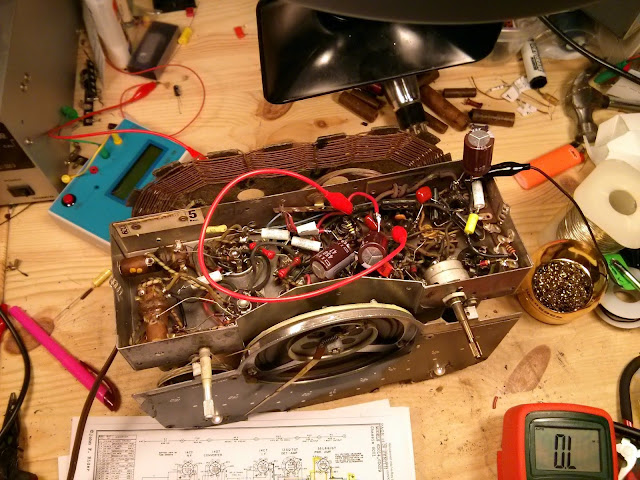 That’s more like it! A jumper confirms the issues has been located. The new capacitors are rated 630V, so should have no trouble with voltage spikes. 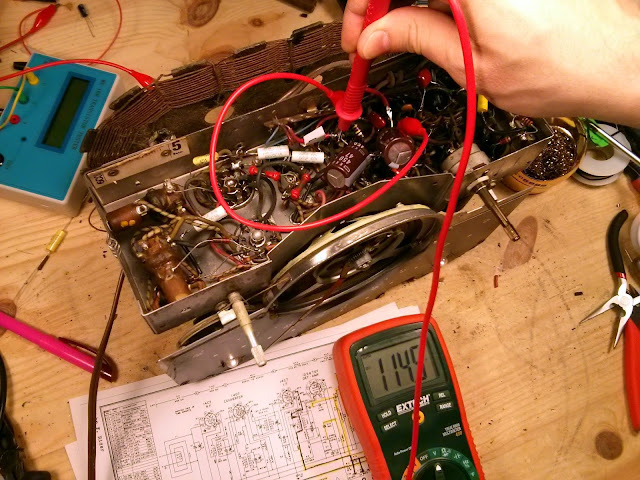 I soldered a 2″ segment of wire to make the connection permanently. 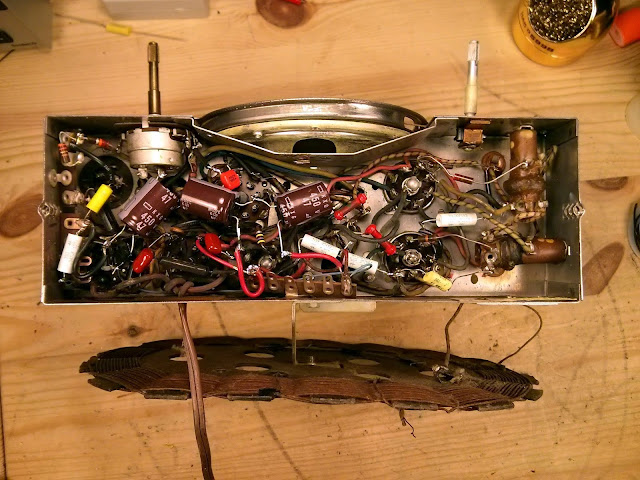 With that repair made, the radio fired up loud and clear! 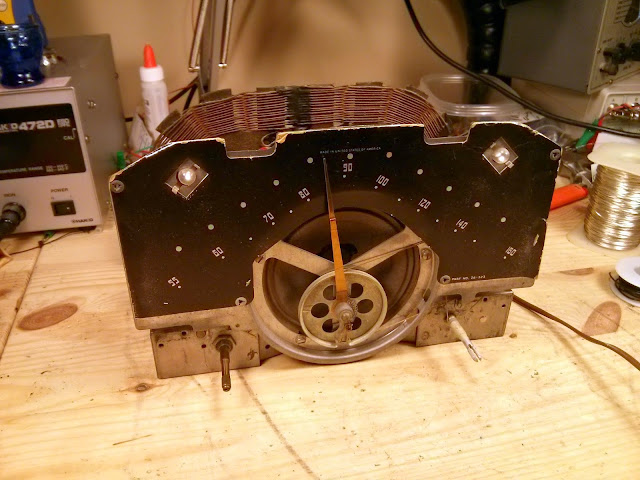 Time to adjust the alignment a bit: 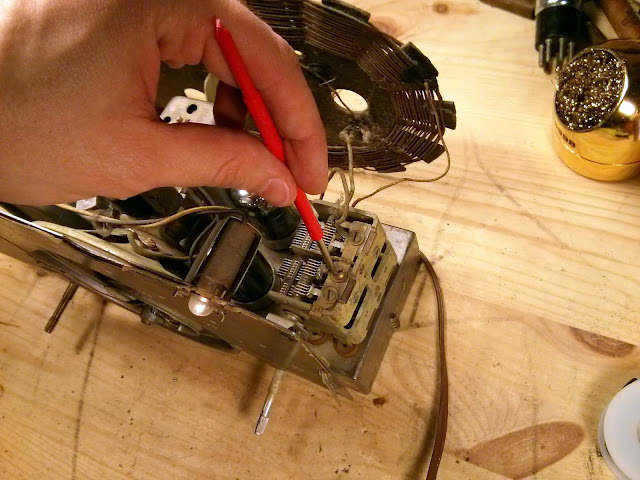 Then finally, back into the cabinet and ready to go home. 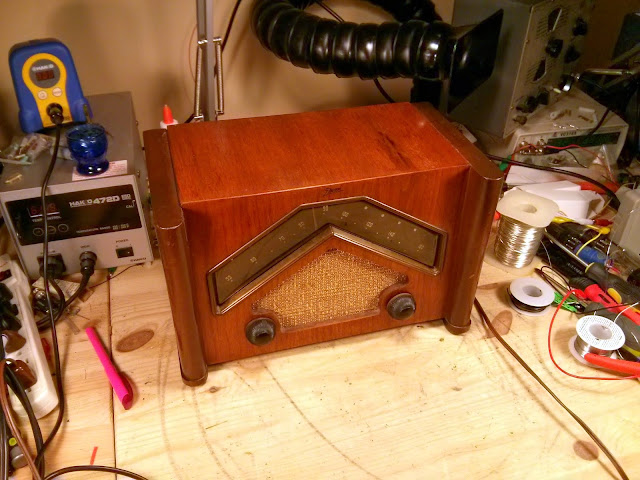 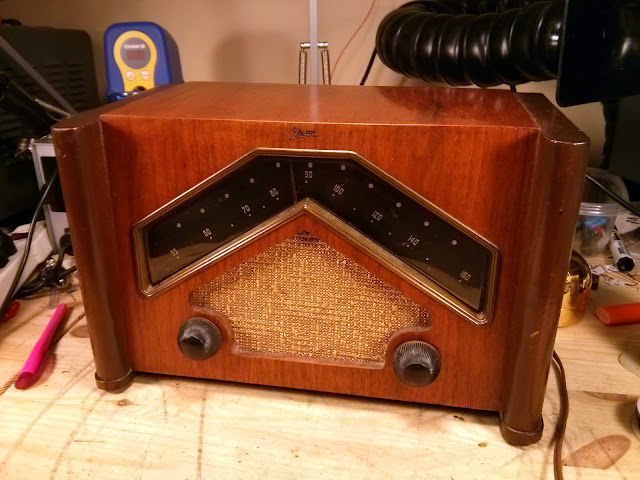 With all new film and electrolytic capacitors, and a replacement tube, this Zenith table radio is going to last a very long time before it needs to be serviced again and sound great the whole time.

If you need your antique radio repaired, Rain City Audio can help.