1934 Silvertone 1708A Repair and Restoration

I recently had the pleasure of working on a 1934 Silvertone 1708A which was brought to me for repair locally. This was great – having a radio repaired can be a big decision, so I’m happy to show off my workspace and chat for a few minutes and go over the radio briefly in person. This particular radio itself is very interesting, too. Sears, owner of the Silvertone brand, liked to re-use model numbers. I discovered 2 completely different radios, one with two slight variations, both sharing the same model number so it also involved a bit of detective work. 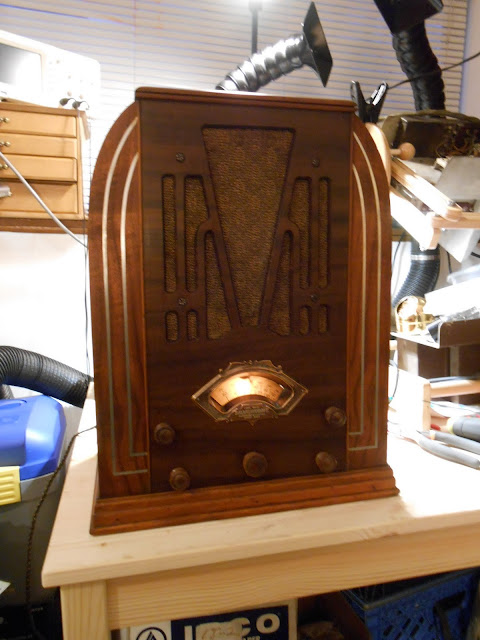 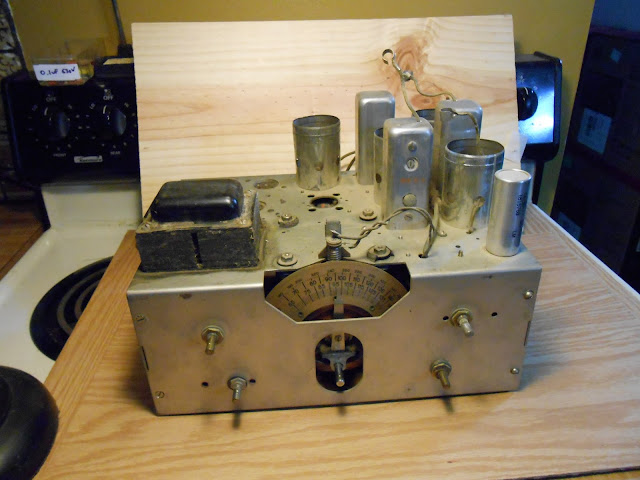 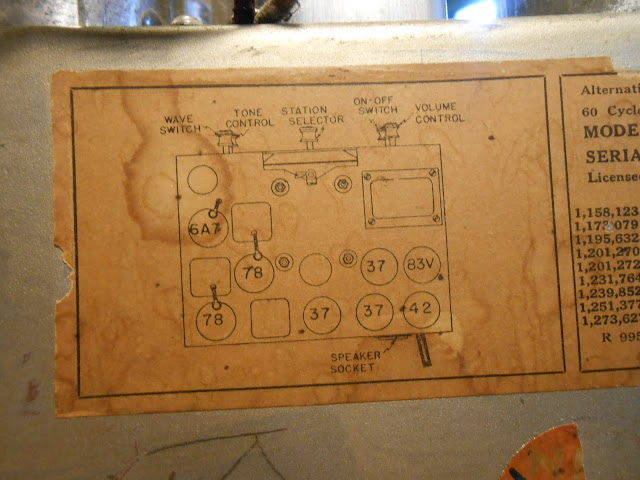 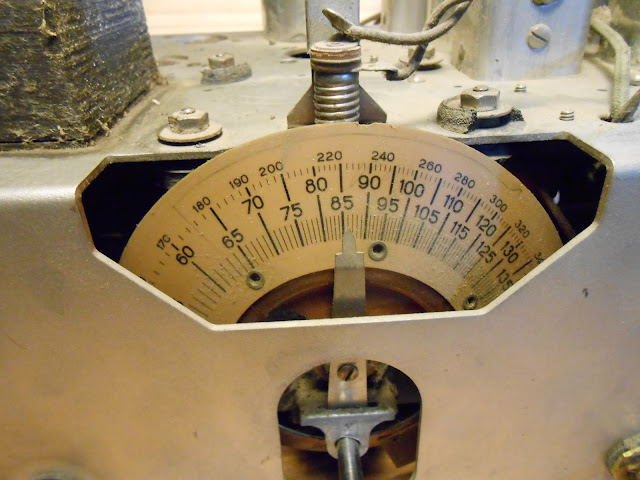 The Silvertone 1708A is an 8-tube radio with a dedicated oscillator and two IF stages for additional selectivity, and a tube line-up that showed it was still in a bit of a transition period: 6A7 78 78 37 37 37 42 83V. In most radios even just a year or two later, the 37s would likely have been replaced by 76s in a high-end radio like this one. The 83V is a bit unusual, too. It’s functionally not much different from an 80, and in fact upon a close inspection, it even had an 80 in place when it came to me. 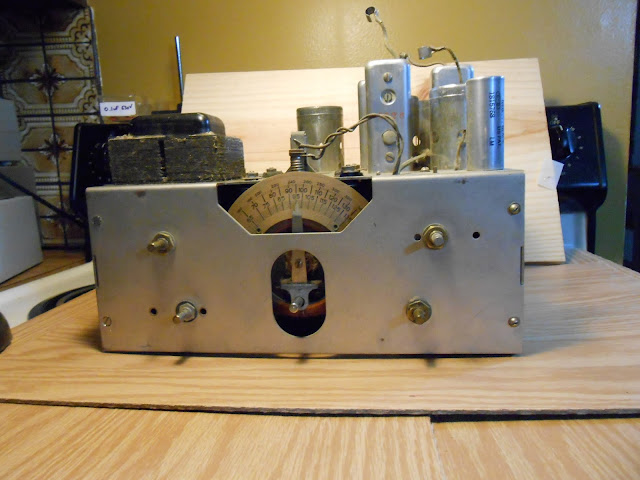 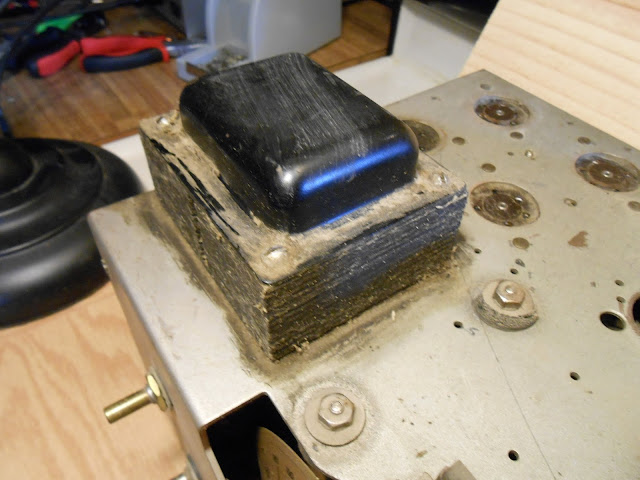 The more knobs the better, and with five, this is near the top of the line. Power, volume, tone, tuning and AM/Shortwave. I went through some intake checks and found 4 tubes were bad, and that transformer looks especially nasty and tested an open winding as well. Underneath was otherwise in decent condition. 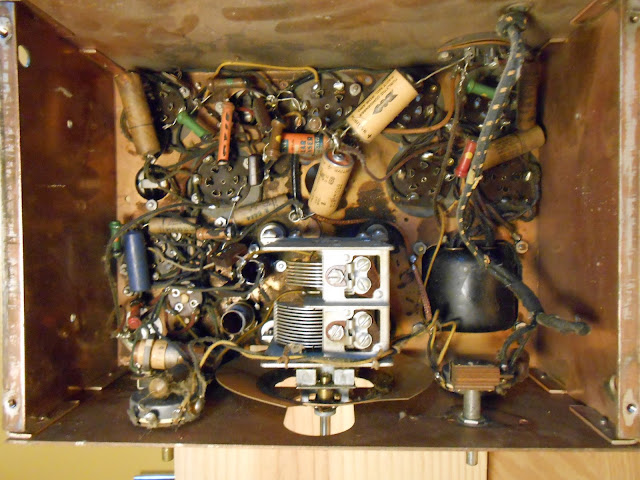 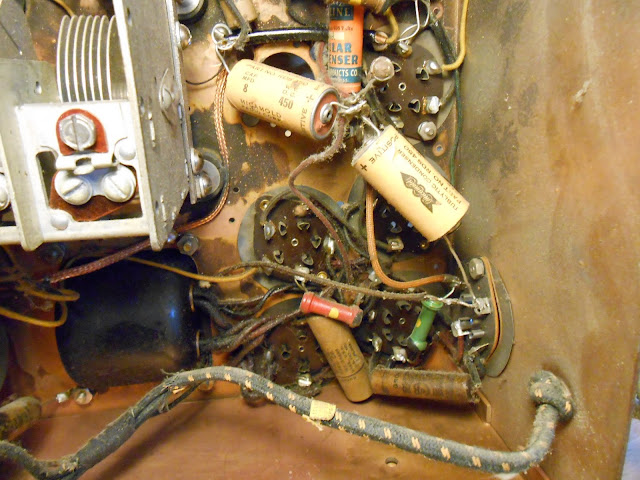 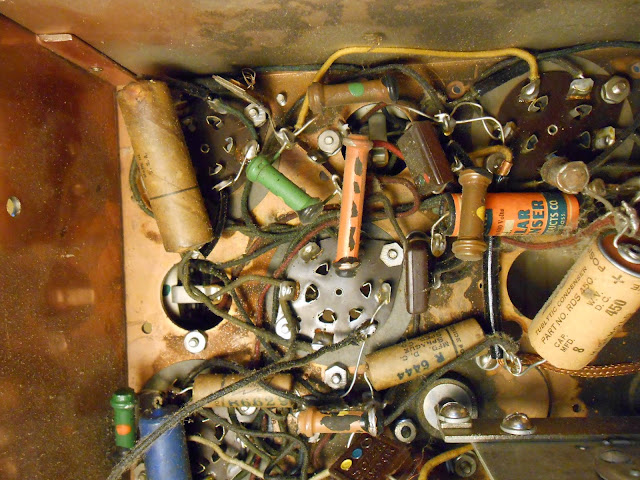 It showed evidence of being worked on a few times, and one of the filter caps was put in across a failed capacitor (as was common, but still very bad, practice back then) but no major issues. The speaker was fine too: 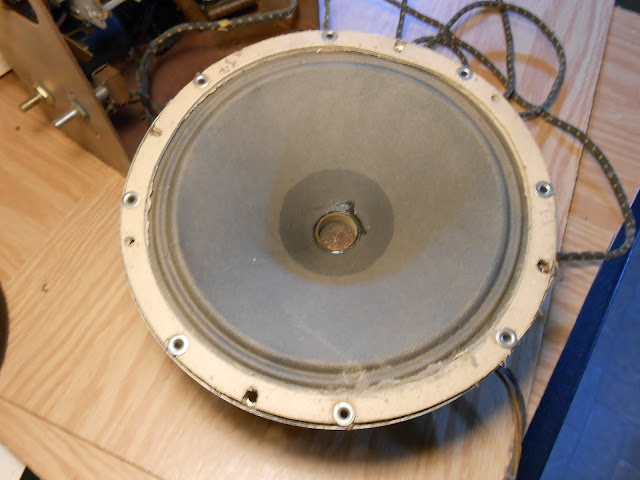 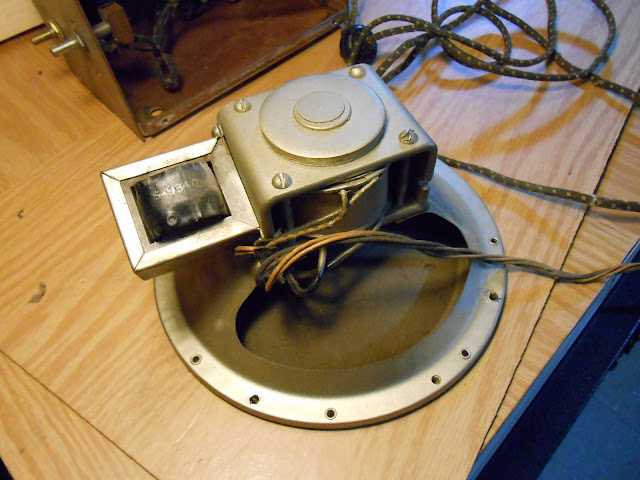 Testing showed the other components to be good, so off to replacing parts. I tested the resistors; within tolerance were left alone but others were replaced: 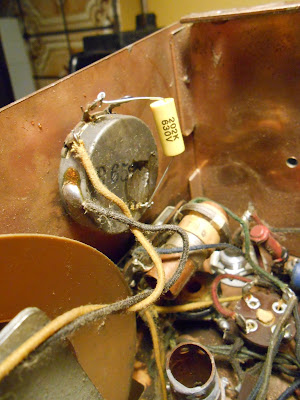 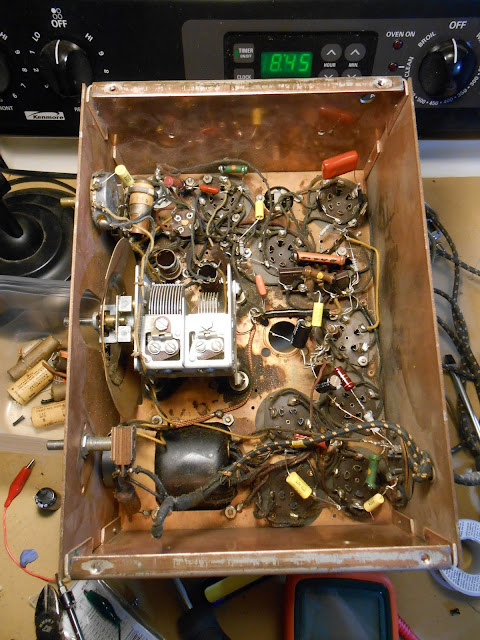 A 2W flex resistor broke along the way. These are incredibly fragile and break if you look at them wrong; they can be replaced with a standard resistor. 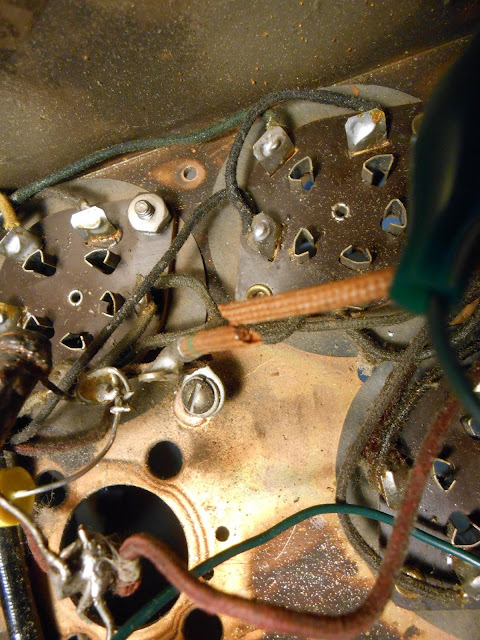 With most of the parts erplaced and ready to go, I replaced the bulb and managed a first power-up using a bench clipped replacement transformer. 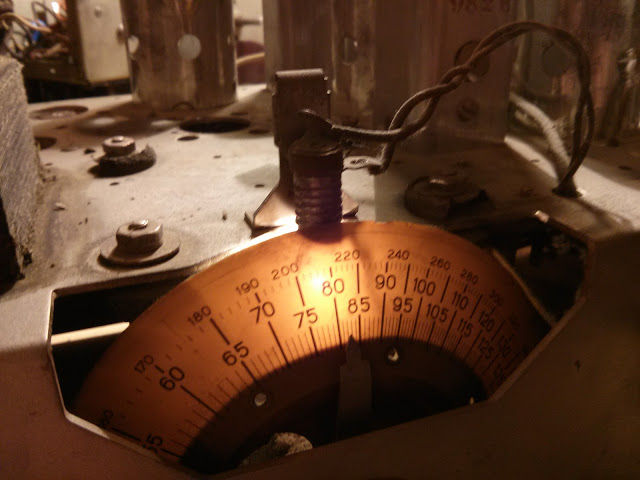 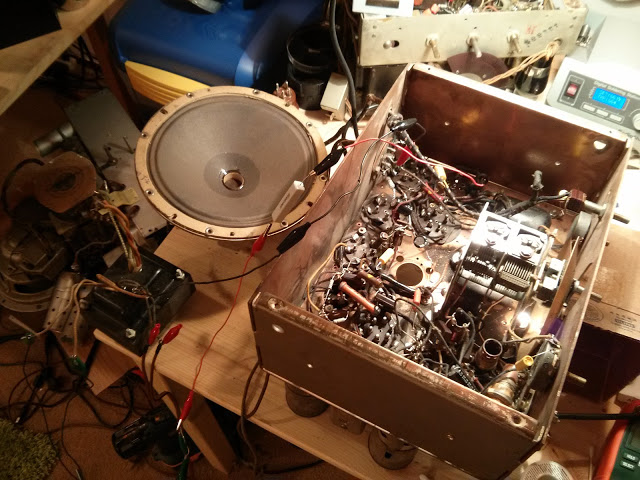 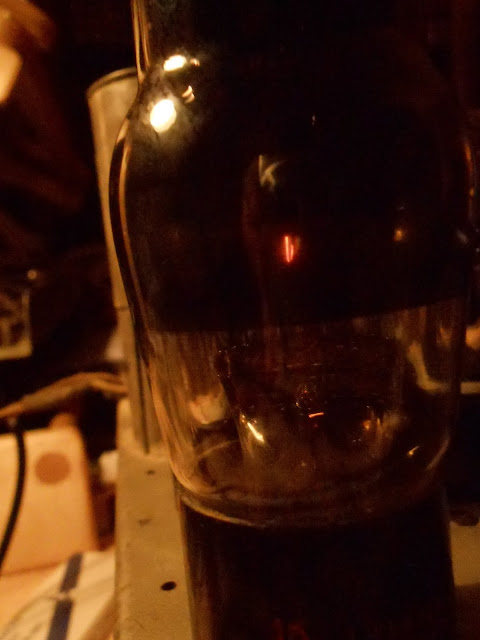 The lights are on but nobody’s home – and despite good voltages coming off the unloaded transformer, and a normal current draw, there’s only about 20V B+ available. Closer inspection and testing of the bias circuit revealed the resistor in the B+ was cracked and reading very high, around 500K, when it should have been 350 Ohms. I replaced it with a very close substitute with some extra capacity. 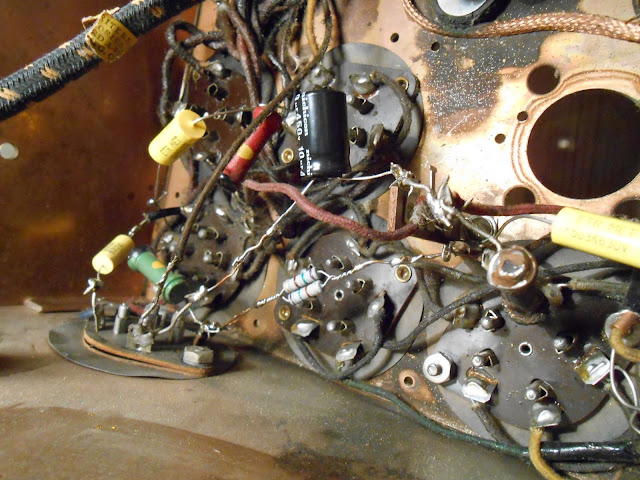 She powered right up after that, and while I was poking around, I discovered the original transformer appeared open because of a break just a little ways back; I was able to re-solder the connection to the rectifier and all was well. In my opinion this was one of the nicest radios I’ve worked on – there was plenty of room to work and attention was paid to make sure everything was wired neat from the factory. (Contrast with the Simplex Model P Dual Band from the same year.) 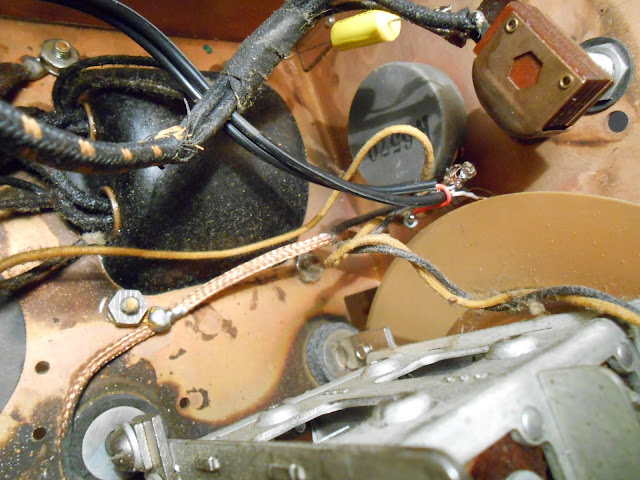 I also added a line input; a simple resistive stereo to mono converter into the high side of the volume control. This way, you can use the radio’s volume control for the input source volume too. 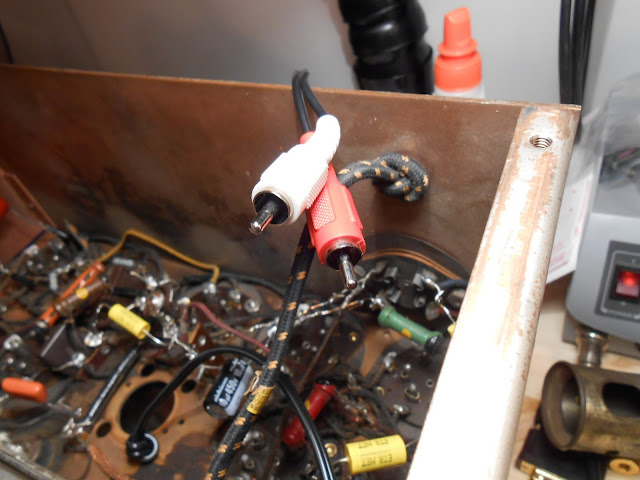 It was time for an RF and IF alignment using my vintage signal generator and digital storage oscilloscope. 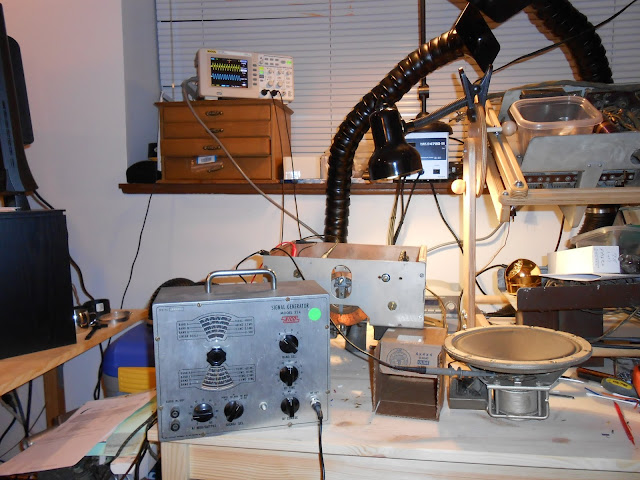 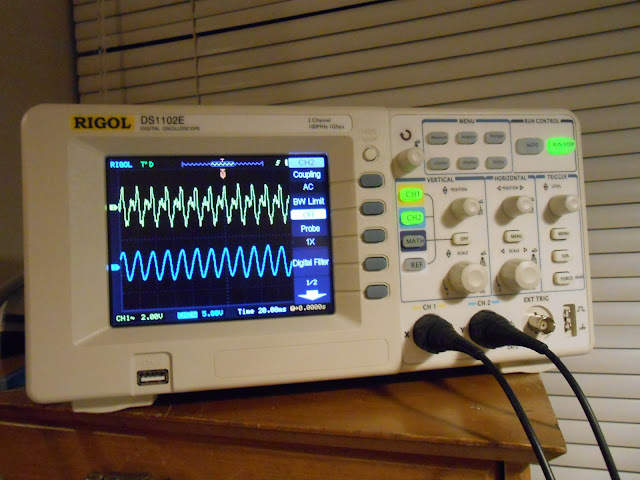 The generator puts off a messy waveform, but it comes out as a nice sine on the radio side. Tube AM circuits are pretty forgiving. 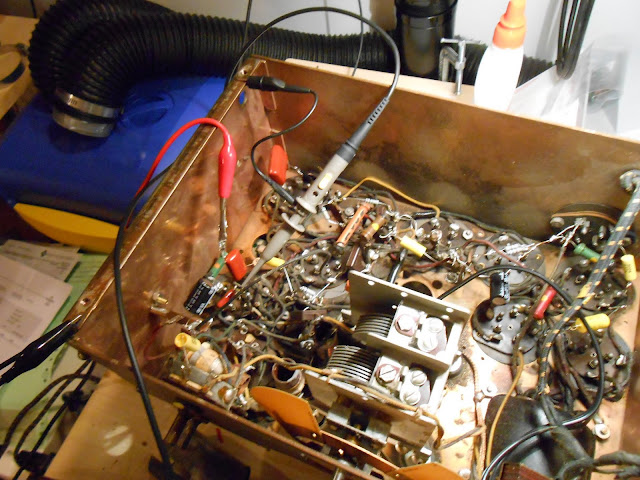 While I was working on the electronics, the radio’s owner spent some time reconditioning the cabinet and it came out incredible. 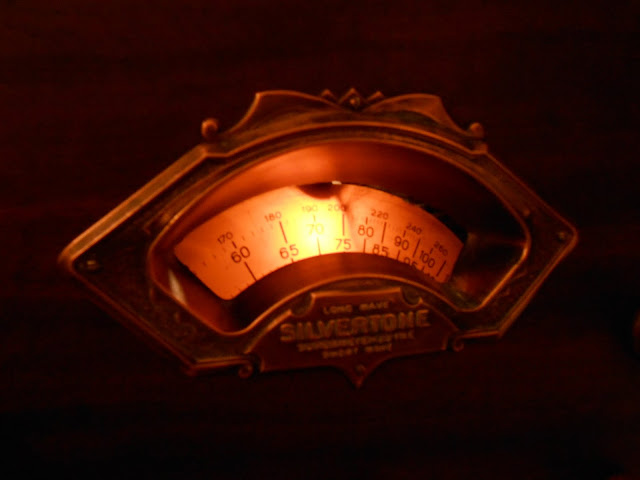 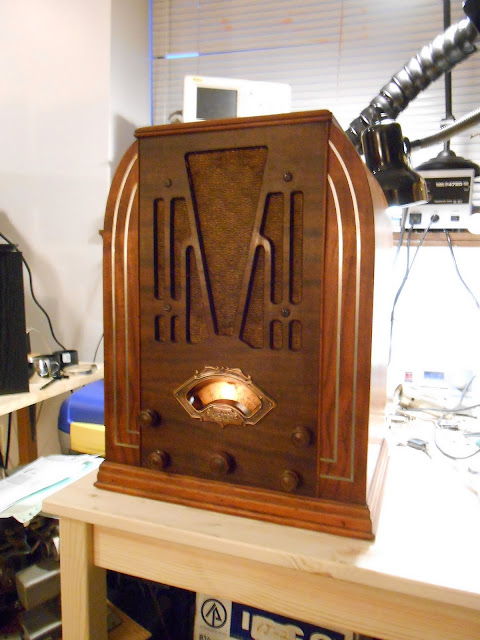 This radio is going to play beautifully for many years to come and will look great in anyone’s living room – especially with the upgrade of adding a stereo line input, it’s also future-proof.

1 Response to 1934 Silvertone 1708A Repair and Restoration