I picked up a very nice 1937/1938 General Electric model F-135 radio from Craigslist a few weeks ago, and have been starting to dig into it. It’s one of the highest end radios they produced that year for the 1937 holiday season and 1938 production year: with 13 tubes, automatic frequency control to eliminate station drift, experimental hi-fi reception in 4 bands from 550KHz (AM) up past 40MHz (VHF) continuously, it offers a motorized tuning with 13 station presets and push-pull 6L6 tubes pushing 20W into a huge speaker. It should sound incredible when it’s all fixed up, and it’s the most complex and highest-end radio in my collection.

I used to have an F-96, actually, but sold it unrestored for the same price I paid for it without touching to free up some storage space – a decision I still regret, but have rectified by getting a new F-135. It’s a beast of a radio, stored fairly well but with some rubs, scratches, water rings and a cigar burn on the top. 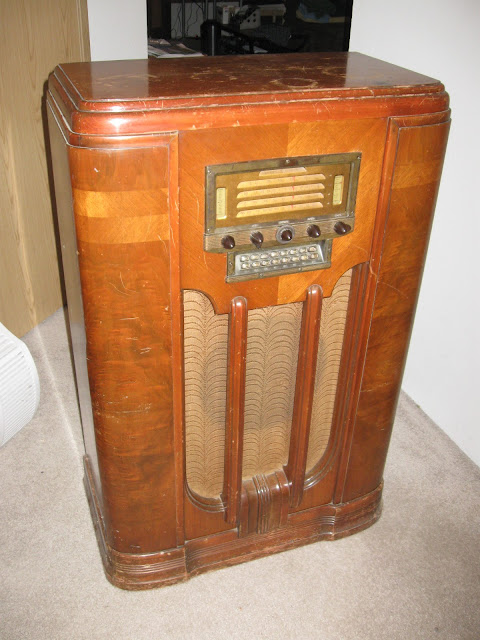 I vacuumed miles of cob-webs and a 1/4″ thick layer of dust before even attempting to remove it from the back. The radio has a unique power transformer style, only GE used “bathtub” power transformers like this. Most are normally square with square cores…this one’s an oval. You can see the motor preset assembly and the pair of output tubes as well. 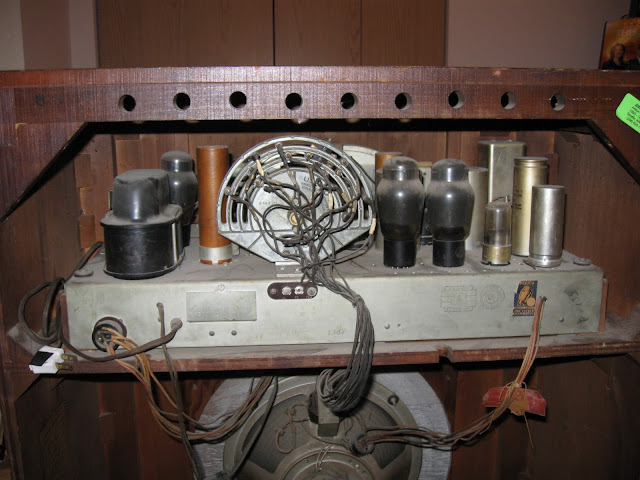 The chassis is enormous and has a lot going on. 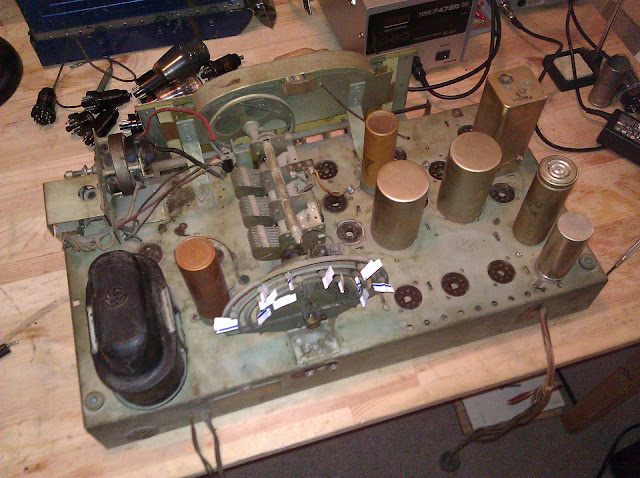 Underneath, it looks like someone’s taken a crack at it in the ’80s or ’90s. There are a pair of orange drops, and a pair of modern electrolytic capacitors – and a few 1940s/1950s era replacements – but other than that it’s all original. There’s a decent amount of crumbling rubber wire that will need to be replaced, and one of the coils has a broken solder lug that I’ll have to fix, but it’s in shockingly good shape otherwise and should be easy to service. Not many things are buried. 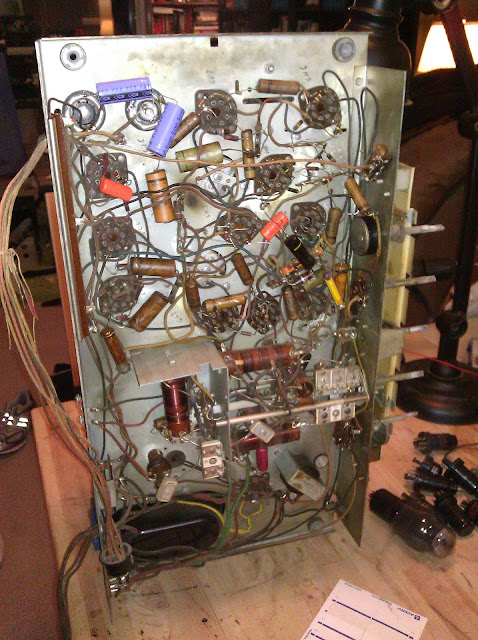 The cabinet cleaned up very nicely after intensive scrubbing with cleaning wipes, Goop, and plain water and rags alternately. Following that, two applications of Howard’s. It brought out the shine on the finish while still leaving the patina around the corners, and blending the scratches in the original finish. I lightly sanded the rings on the top, but not all the way, and left the cigar burn – I didn’t want to remove all of the “character” in the cabinet. 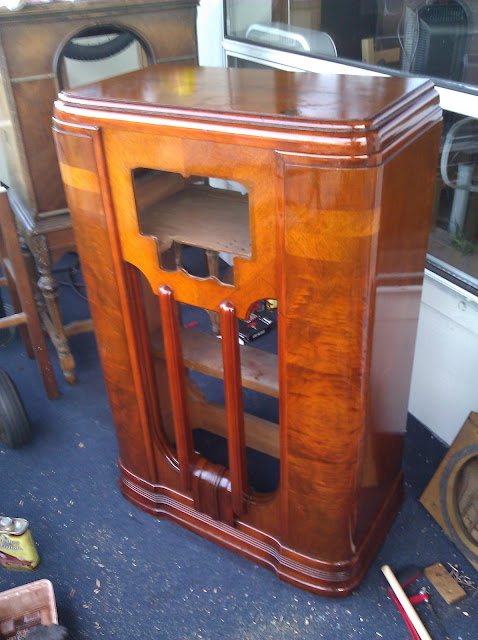 The chassis doesn’t have any good mounting points, so I bit the bullet and ordered one from Steve Strong who makes custom radio chassis stands. They’re huge, high-quality, fully articulated and can support a lot of weight. Arrived some assembly required: 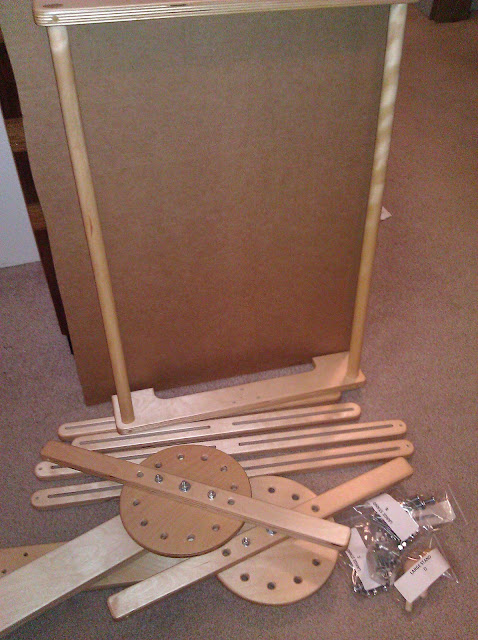 All assembled, it can rotate 360° including suspending the chassis upside down, locked in with the chassis retaining bolts that normally hold the radio into the cabinet. 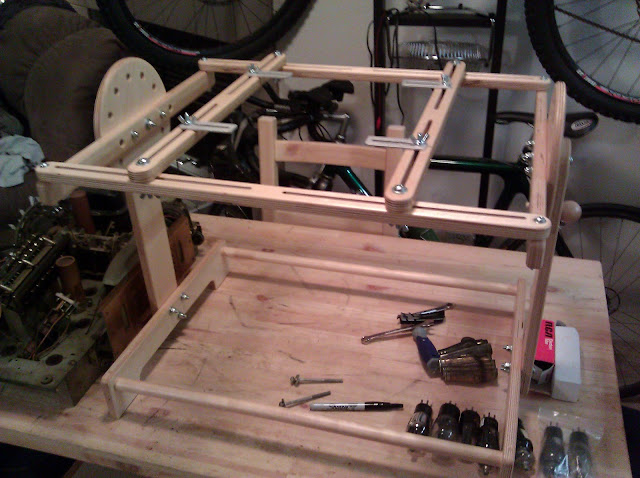 And locked in ready to go: 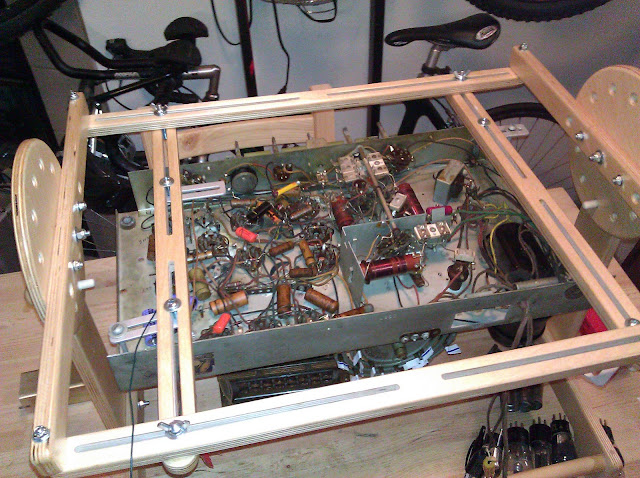 Most of the coils in the radio test fine, with the exception of the output transformer which has one half of the push-pull primary open. That’s bad news, but fortunately 6L6 tubes are pretty commonly used today in guitar and hi-fi gear, so new-stock output transformers are easy to come by. The original was rated for 20W; the closest size available for the replacement is an Edcor 30W transformer. The new transformer might even improve the sound quality a bit – losses in transformers were one of the sources of poor fidelity in older radios (and even in modern hi-fi gear); the new transformer is flat from 20Hz-20KHz.

Edcor builds the transformers to order, so it won’t be here for another month or so, but I’ll be starting on the rest of the repairs before then. Stay tuned!