I’m continuing to work on the GE LF-116 radio, an AM/pre-FM radio manufactured in 1942. We left off where I’d created a jig to hold the radio upside down because it couldn’t be mounted the way I normally do, and now I’ve started to go through and refurbish the components. I quickly ran into a bit of an issue which spawned an entire new post, which would’ve normally just two or three photos in part of a larger article: It’s cramped down there! 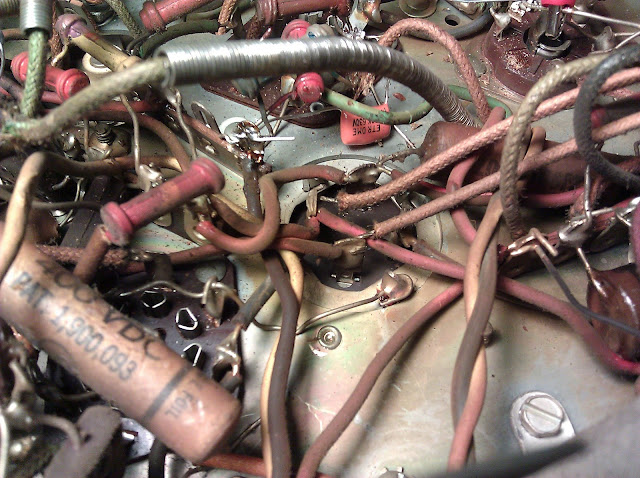 In the center just below the “orange drop” capacitor hanging upside down is the base of the multi-section can capacitor. Seen from the top circled in red: 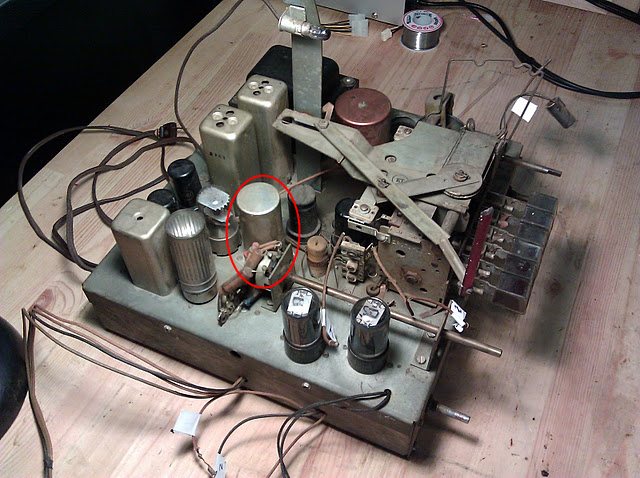 This capacitor houses the first second and third filters, and the output tube’s shared cathode bypass capacitor. There’s just nowhere good under the chassis to mount a terminal strip and new capacitors, so I’m forced to actually go ahead and restuff this can with modern replacements – it’s a time consuming process I’ve mentioned not finding to be a good use of my time in the past, but necessity dictates I do it this time. This is the first can I’ve restuffed, and it didn’t come out quite as well as I’d have liked but it’s passable to anyone but a purist.

I begin by removing the leads from the terminals on the bottom of the can and marking which they came from. The body of the capacitor is the common negative for all four segments and is tied to chassis ground which makes it slightly less messy than if it were an insulated can. 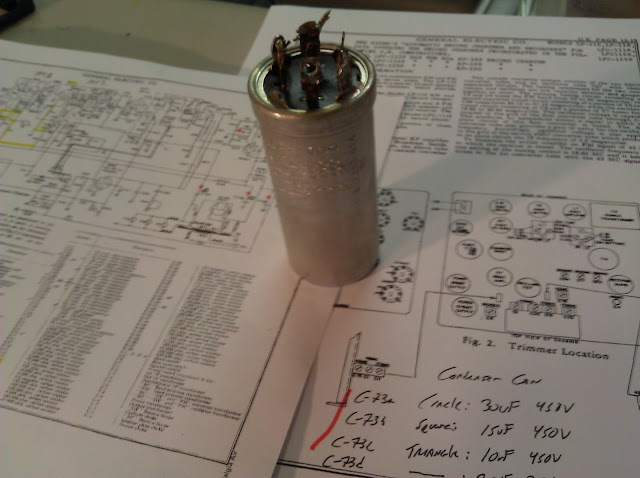 The lugs are marked with a shaped cutout in the phenolic base, and the mapping is indicated on the side of the can. 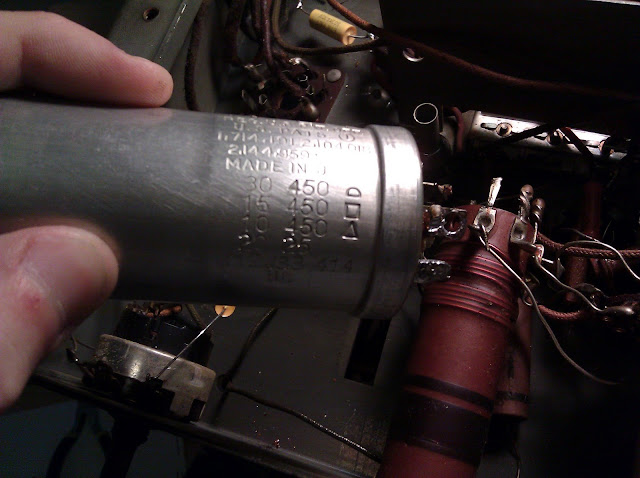 In this case we have:

I stock 10uF, 30uF and 47uF capacitor sizes, so we’ll be using a few 10s to make this work. I’m increasing the second filter from 15uF to 20uF. Original manufacturing tolerances were on the order of +80%/-20%, so this isn’t even a noticeable increase to the radio. Regardless, most times it’s safe to increase (even up to +100%) the rating of the second or later filters with no effect, due to the current limiting of the first resistor. It’s never a good idea to put too high of a capacitor as the first filter, though, as this can raise the voltage and stress the rectifier tube leading to early failure. The modern replacements are similarly sized to the original in this case: 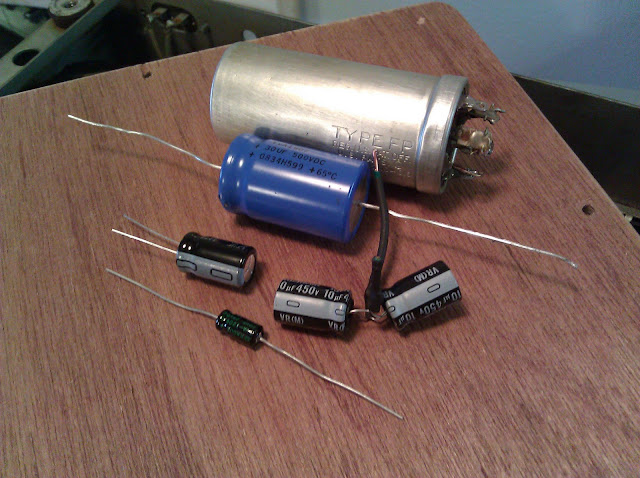 In blue, 30uF @ 500V, each black is 10uF @ 450V (two in parallel for the second filter), and the tiny one is 20uF @ 25V. All set. Power tools and protective equipment later we’re ready to cut the capacitor open and extract the probably-toxic guts. 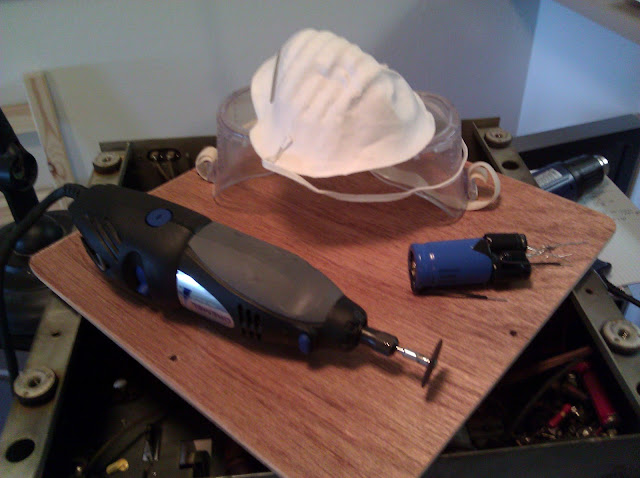 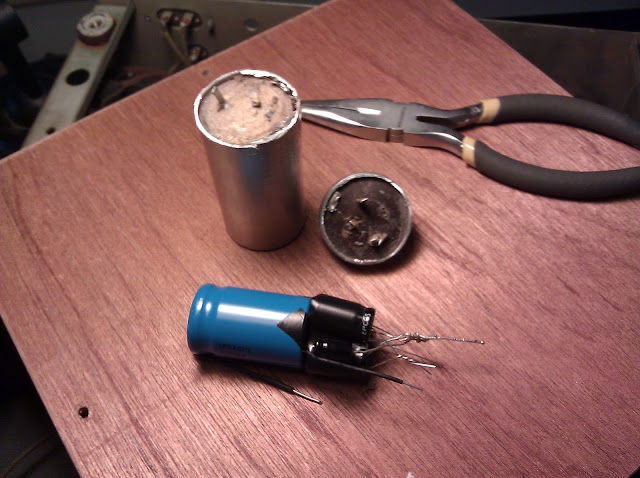 Some time with gloves, an exacto knife and pliers later (this was the longest part of the process), I scraped the old parts out and disposed of them. You can clearly see the foil-dielectric layers. And the pieces of the foil I shredded to get down to a place I could grip tightly enough to rip the contents out. The entire thing was sealed in using potting tar which was annoying to deal with. 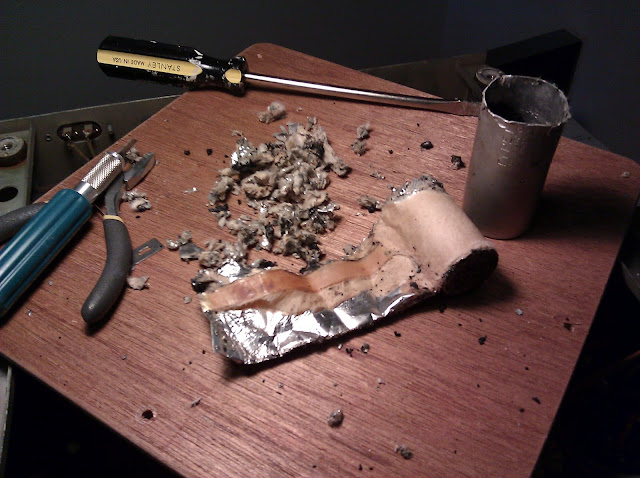 I bundle up the remaining capacitors with heat shrink on all leads, then electrical tape for double-insulation. 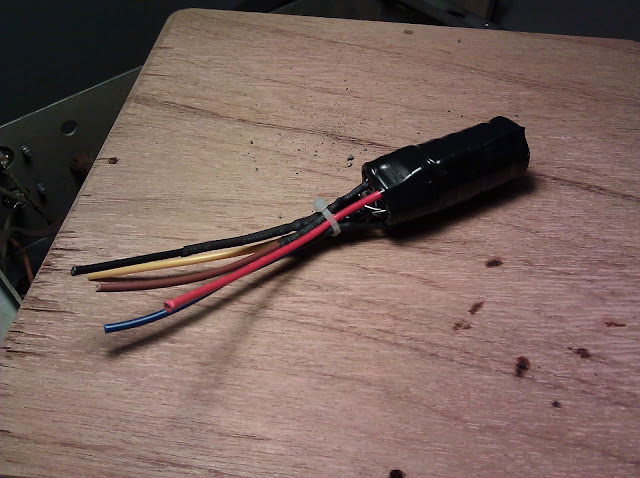 Then shove it all back inside the can and slide the base on, then wrap the entire thing in Gorilla tape to hold the pieces together followed by a generous helping of electrical tape. 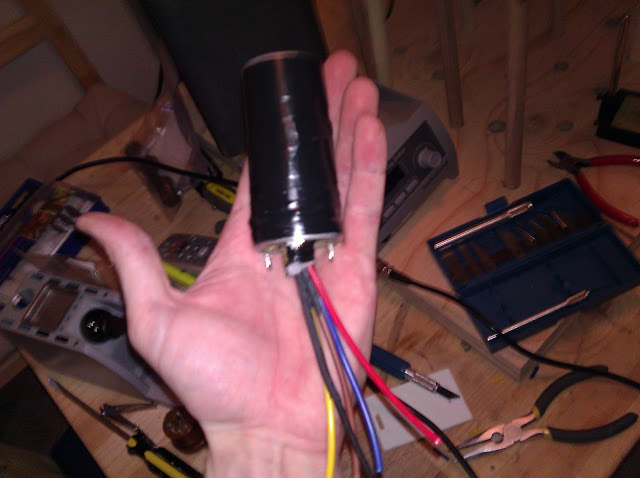 Then, I mount it back up to the chassis. Two of the crimp points broke during the removal, but two remain and that’s just fine. 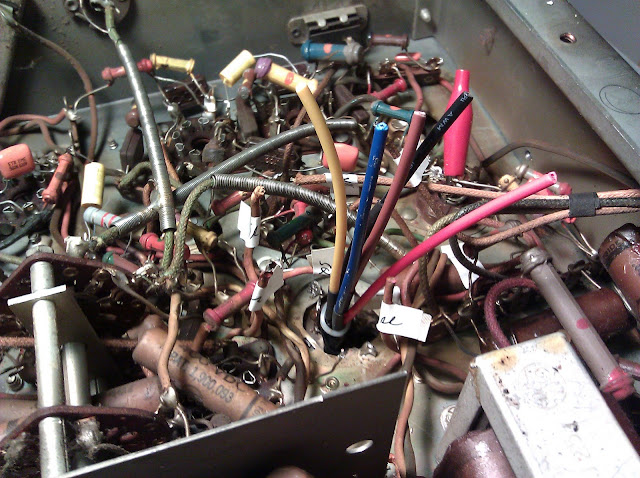 I picked colors in decreasing order of capacitance; red-yellow-brown-blue. I might mount the black common to one of the crimp lugs and solder that to the chassis, or find another mounting point. Haven’t decided that part yet. Mounted to the chassis from the other side: 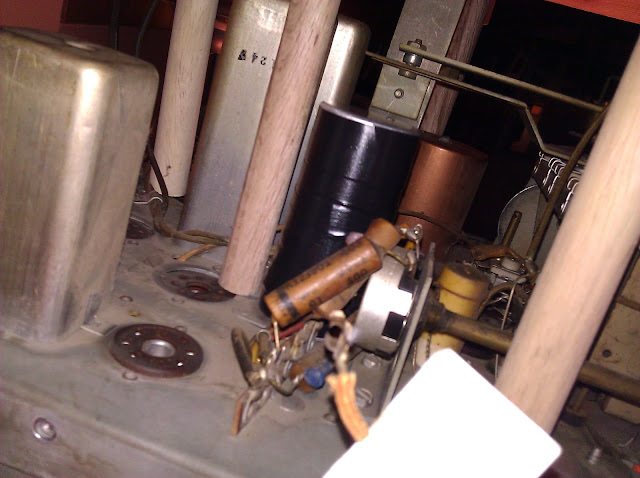 It’s not the prettiest by any means – but, this is the back side of the radio that isn’t going to be looked at much, I’m okay with that.
Next article, I’ll go through replacing the rest of the small capacitors and the 7K7 socket which is damaged. I’m debating replacing it with another loctal socket, or if I want to replace it with an octal socket and a 6AQ7 tube. They’re functionally identical but have different bases. More on that later!