I’ve been working on this Hornyphon Attache 61 model W 360 A radio for a customer this month. He brought the radio over from his mother’s estate in the 1970s and it’s been sitting ever since, and came to me to have it reconditioned. German radio sets from this era are nice and elegant, this one has a blonde finish that looks like it’s nearly new especially for the age: 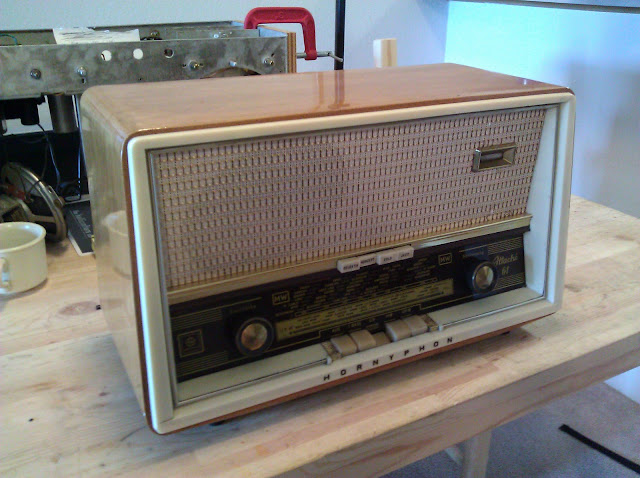 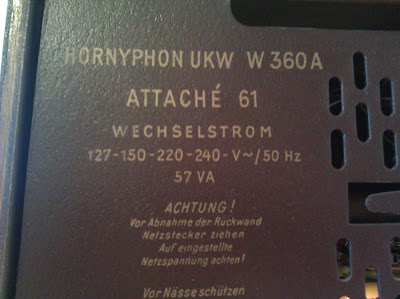 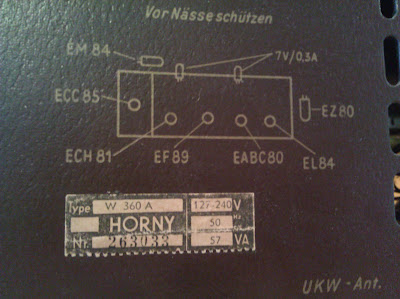 I’ve had this one in my shop since July but had an arrangement with its owner to hold off doing the work for a short time.

The radio uses 7 tubes, ECC85 (6AQ8), ECH81 (6AJ8), EF89 (6DA6), EABC80 (6AK8), EM84 (6FG6), EL84 (6BQ5), EZ80 (6V4). European tubes use a different numbering system, but fortunately there were US-equivalent tubes – identified by the parenthetical numbers – which I was able to find for substitutes as well. The transformer has multiple taps on the primary, so it can be used anywhere by just changing the tap setting – perfect for when it moved from Europe to the U.S.: 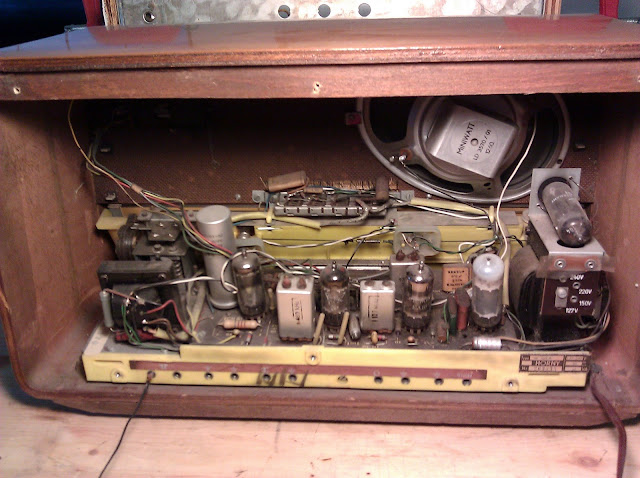 On the left side we see a “slug” (inductance) tuner and the output transformer; the power transformer and rectifier are on the left. This model uses a single medium-sized speaker. There’s also some evidence of physical damage in the past: 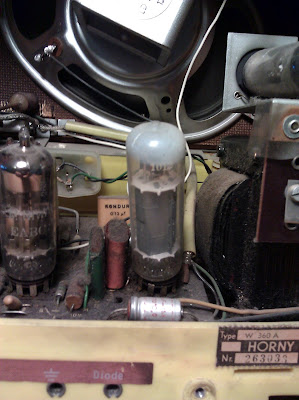 This EL84’s tip is broken off, vacuum lost, and the getter inside has turned white. There was an incorrect substitute for the EZ80, too. This radio uses an early PC board, instead of point to point wiring: 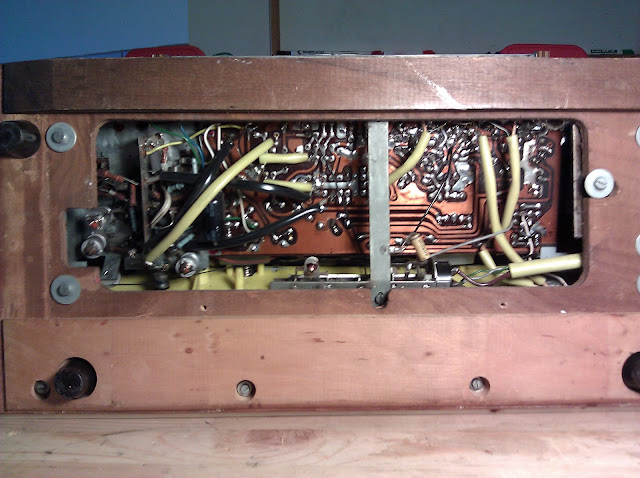 that seems to show evidence of repair to the electrolytic filter capacitor at some point in the past – most likely the ’70s. 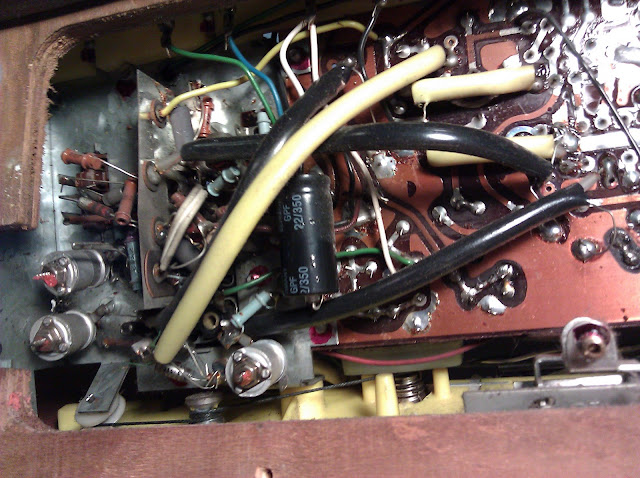 This 22uF 350V capacitor was placed across a section of the defective can capacitor up top, but without removing the defective part from the circuit. It probably worked okay for a time, but when the failed original capacitor finally went full short, it would’ve had minimal effect. This is a “hack” repair – it probably got the radio playing again, at the time, but it wasn’t made with much attention to best practices or correctness. I removed it and returned the power supply to its original configuration during the repair.

Early PC boards are extremely fragile – both due to their construction, and the fact that they’re now over 50 years old and have become brittle. I wouldn’t have accepted this radio for work without my Hakko rework tool, which handles PCB repair quite nicely: 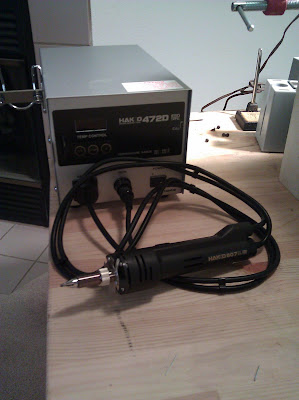 Fortunately, there are good schematics available and the top side of the PC board is marked with the component values and shows trace locations and ground points, even: 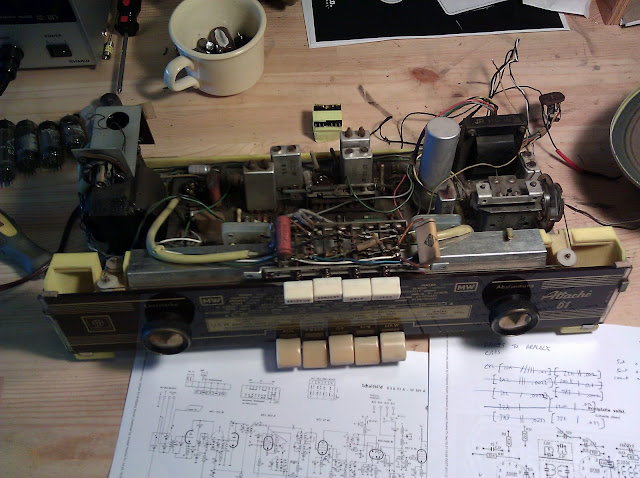 My customer assisted translating some of the German instructions for me, which clarified a few points. I begin by using the re-work tool on the bottom of the board: 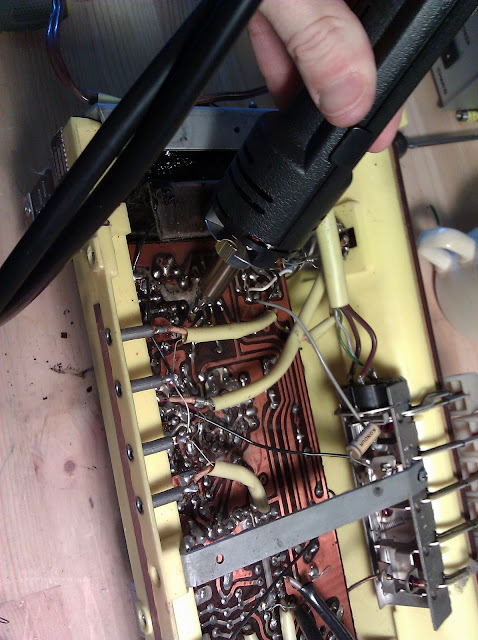 then feed the leads through the top side of the board and re-solder to the solder pad and trace on the bottom: 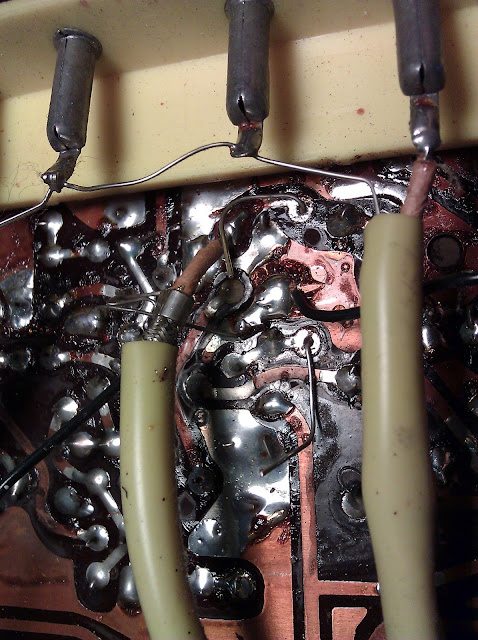 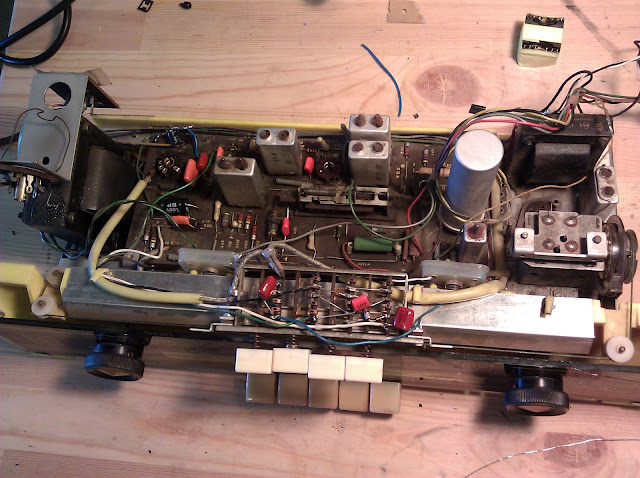 There’s a few replaced components – but not as many on earlier radios: 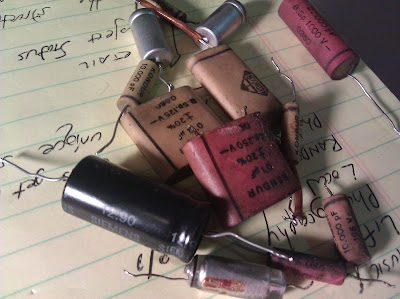 Also replaced the can capacitor with two single capacitors above the chassis, routed through the holes the can used go into. 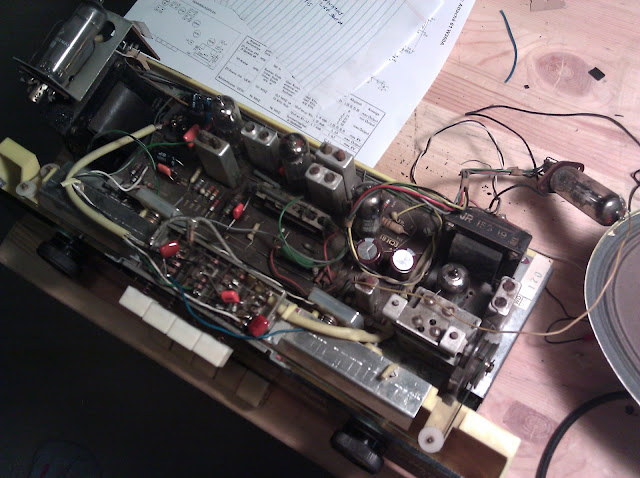 With all the defective parts replaced, it came time to power it up. It comes online okay – but no audio at all! Signal tracing produced a click when I’d tap the grid of the EL84 output tube, but the 1st AF (one section of the EABC80) tube produced no click like it should have. Turns out there were several cold solder joints – probably decades old – on the bottom side of the board around the output section. It’s possible they cracked from heat, even. The problem was fixed by a quick reflow on the joints, causing them to properly conduct electricity again.

That problem sorted, the radio roared to life crystal clear on the FM broadcast band – but on the AM band, it suffers nagging crackles that override the audio and sound bad. Unfortunately, this is a symptom of a very bad problem called Silver Mica Disease and it happens due to electromigration of the silver under a strong electric field. Silver migrates out of position and when a sufficient charge builds up it arcs across the gap, resulting in a static crash in the audio. It’s repairable if you have a lot of time, or a lot of money to pay for someone else’s time, but is widely considered not worth it. In this case, my customer decided AM radio isn’t that big of a deal to him and is comfortable keeping the radio FM-only. Take a look at the link to see what’s involved in an IF transformer repair, it’s not a simple procedure.

This radio has a neat tuning indicator, a magnetic deflection tube similar to a television CRT: 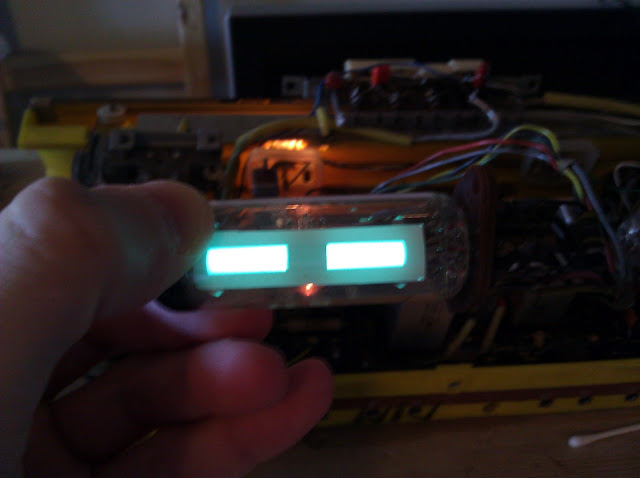 As the station gets stronger, the gap in the center narrows; when it closes fully you’re locked on station.

Reassembly is quite easy: 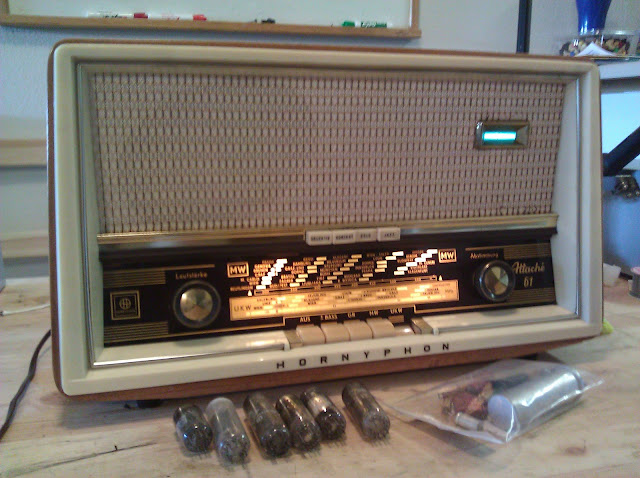 Reassembled, running, with the replaced tubes and replaced capacitors in a parts bag. A closer view: 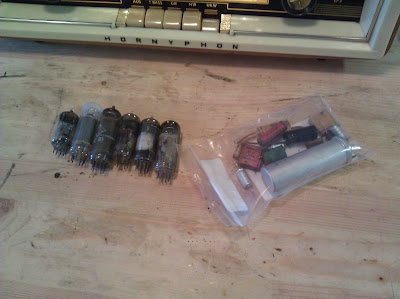 The backlit dial has beautiful markings, originally for the cities in Germany and around Europe where it was located. German FM radios from this time period used a shortened FM band, so this one only tunes ~88-101MHz, instead of the full 88-108MHz used in the US. 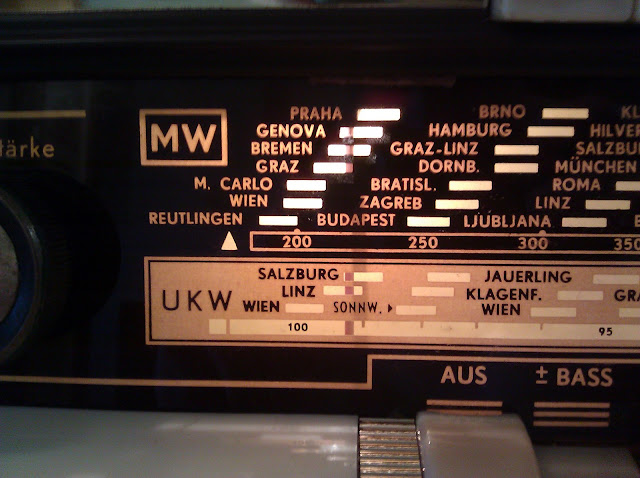 The dials are marked in German, naturally. UKW is short for Ultrakurzwelle, Ultra Shortwave, which is the FM band. MW is short for Mittelwelle, Medium Wave, the AM Broadcast Band.

And here’s some photos of the finished product, lit up: 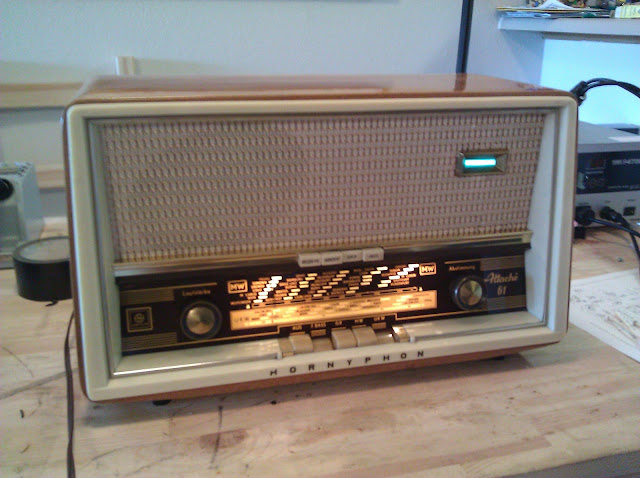 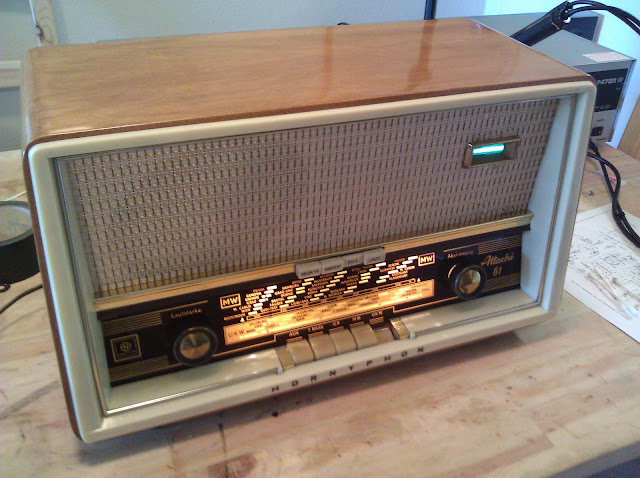 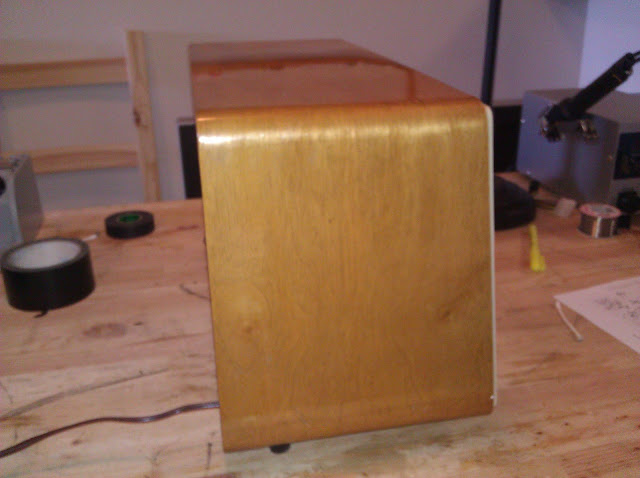 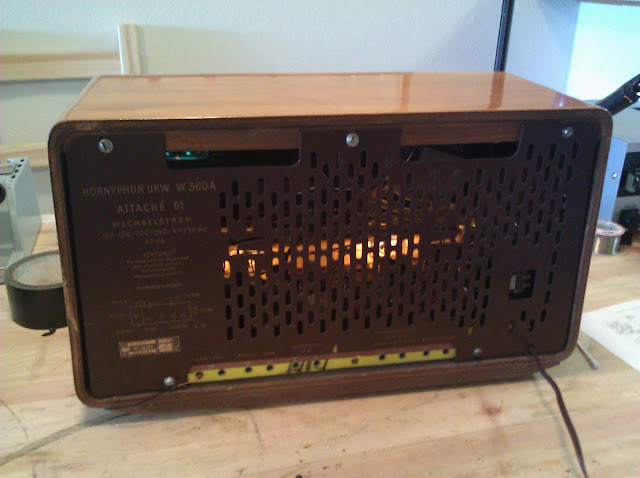 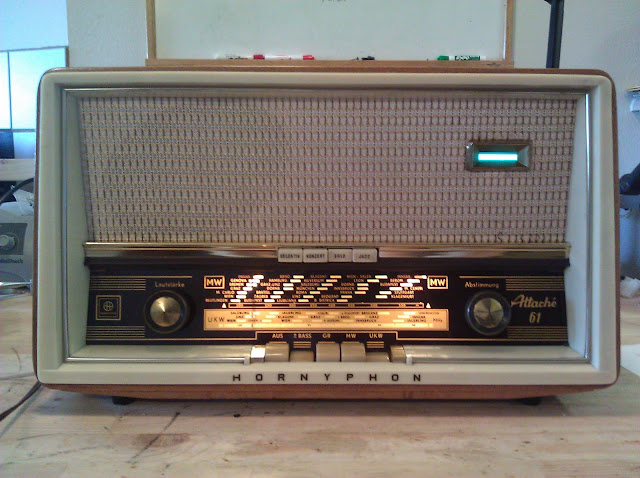 Now that it’s repaired, I expect the radio to give many more years of faithful service receiving music and brightening up the room it lives in.