I found a Samsung 225BW LCD sitting on top of my apartment’s dumpster, and figured I’d drag it upstairs. It’s a few year old model but it’s better than the current older Dell LCD that I’ve been using (1680×1050 versus 1440×900). A quick check showed that it would power on, sort-of, but the power light would flicker constantly and there was no backlight.

I popped it open, suspecting a problem in the power supply – and turns out that was right. Several capacitors on the board were showing signs of failure. Capacitors are the main component I replace in the vintage radios but cost-cutting OEMs are often known to use caps that fail after only a few years when new to save a few cents on each part that goes out the door on new things as well. In this case their 330uF and 820uF @ 25V caps had failed and the logic board was no longer getting good power. 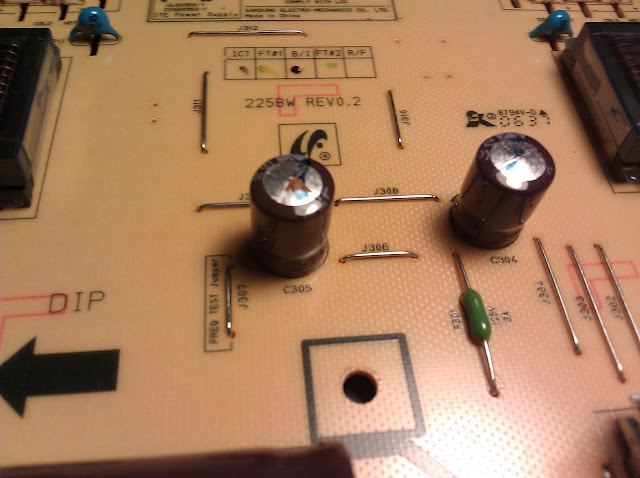 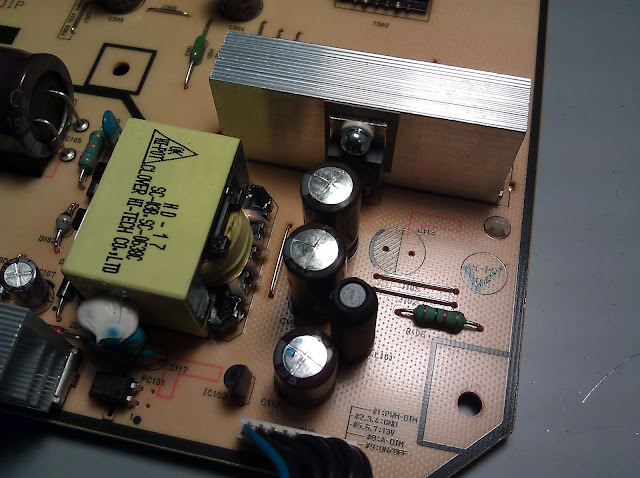 This project is one of the reasons I bought a Hakko 472D desoldering tool. It’s made for reworking through-hole and point-to-point boards, and works by melting the solder and then applying a strong vacuum through the center of the nozzle sucking it out of the way and cleaning the connection. It wasn’t cheap, but I thought it’d be important to have one of these as I do more types of electronics hobby work. I tested it out on an antique radio and it works perfectly for the annoying old joints. 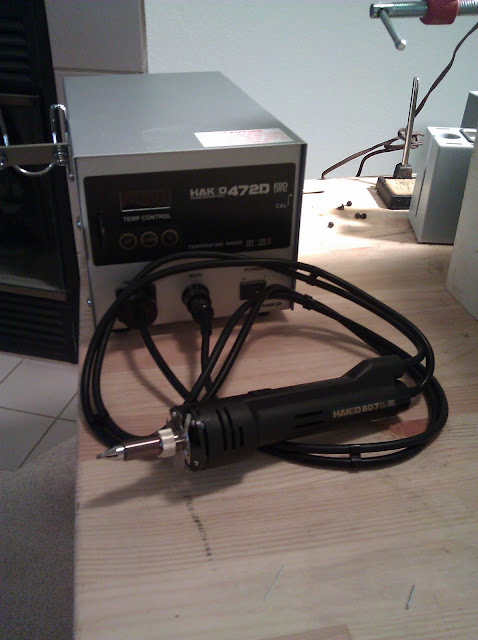 This board is pretty easy to work on, the components are widely spaced and marked. 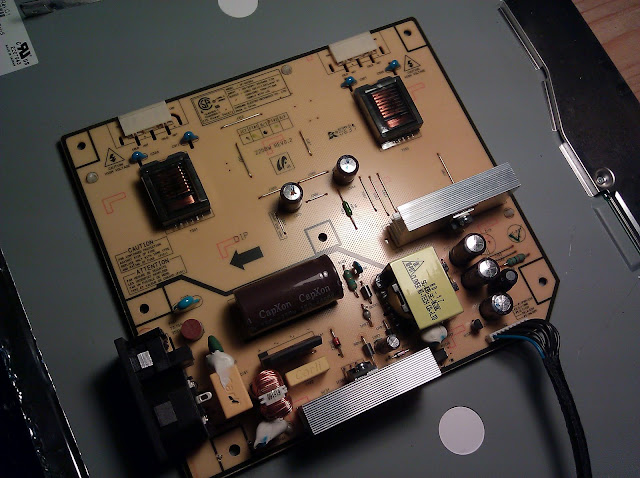 Even though it’s not bad, I’m replacing the large main filter as well – just in case. It’s the same brand as the failed ones. 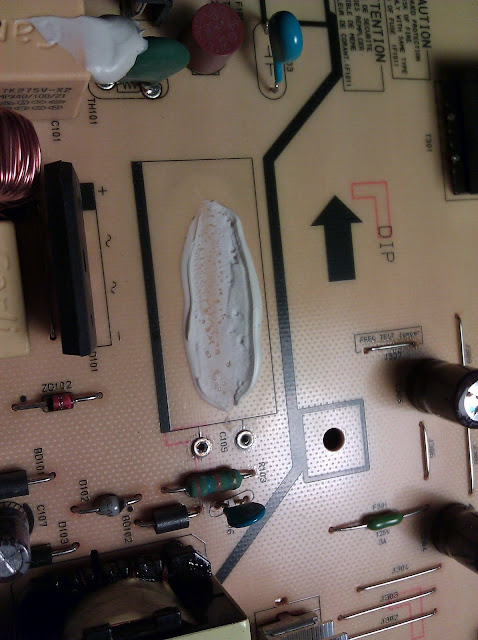 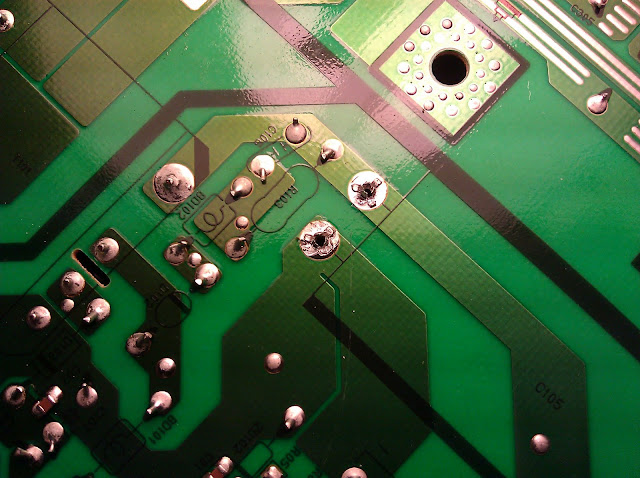 Here I’ve depopulated the bad components from the board and have placed the main filter back in position, with the old one above it for comparison. 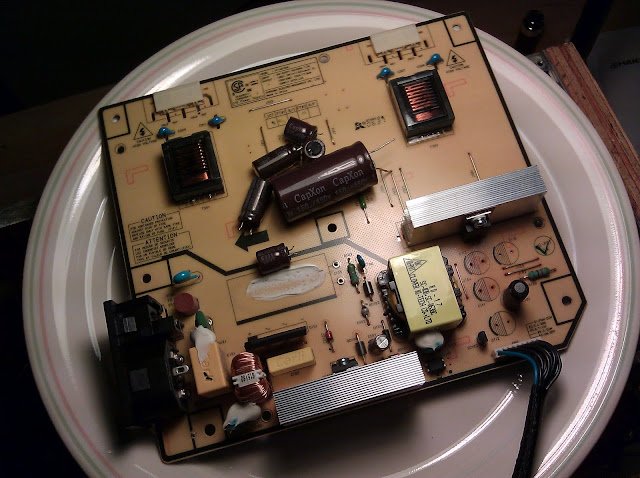 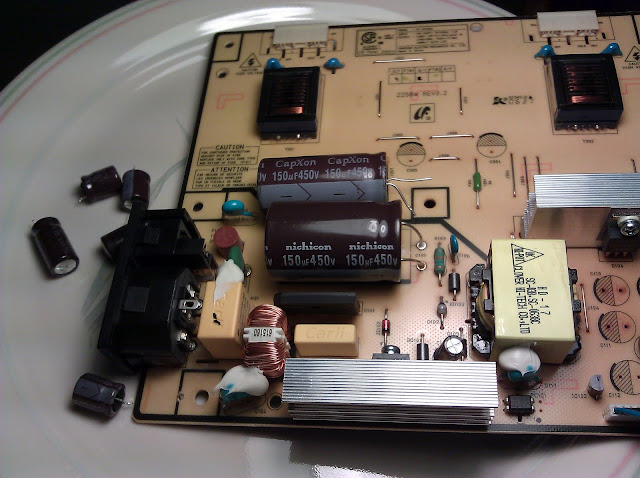 The new caps are larger than the old ones – for the same ratings, a larger size capacitor is going to be a bit more durable. For example these 330uF 25V models: 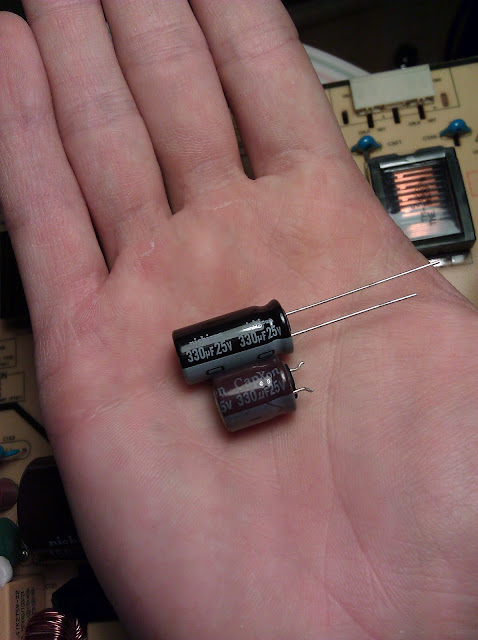 Slid the components through the top, spread the leads to hold them in position while soldering and reattaching: 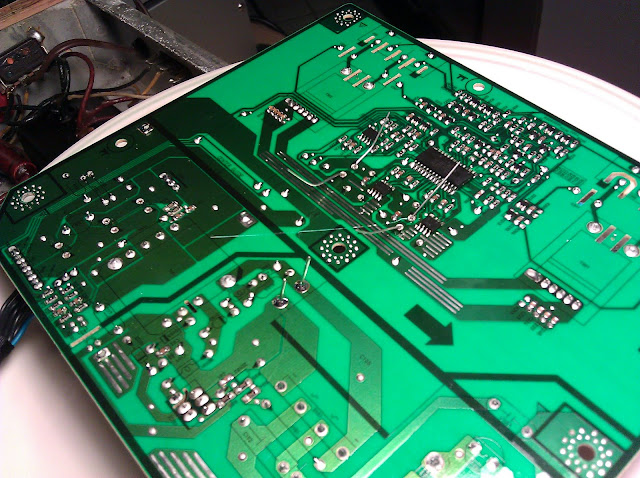 Bad planning on my part meant I forgot to take a photo of the board post-repair, but it only took about 30 minutes to do the entire thing – most of which was spent figuring out how to adjust the Hakko. And for the power-up: 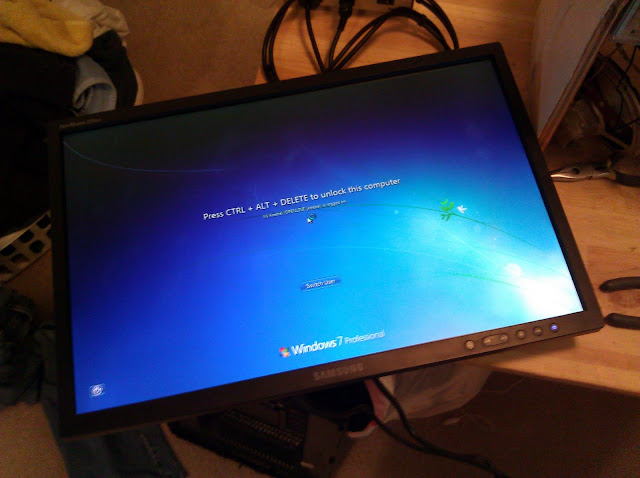 Success! Back to life. This LCD goes for around $150 online even today and I’ve been meaning to add a second monitor to my desk anyway, so I’m about 1/3 of the way to recovering the cost of that desoldering station after the first project. One down, two to go….This project required 3x330uF 25V capacitors, 2x820uF 25V capacitors and 1x150uF 450V capacitor which came out to $9.83.