In a fit of clumsiness, I sent my EICO 221 VTVM flying off my bench and it struck the ground pretty hard. Not bad for its first major accident since 1959.

Everything survived…except the sensitive meter movement, which snapped a spring and a wire. I’m locating a replacement, but in the mean time, I’ve made a high resolution scan of the dial scale when removed from its meter. This scan may be useful to anyone else with the same bench meter, as the faces can become covered in mildew and dirt over the years.

Modern multimeters are both more accurate and have a higher sensitivity than this old bench meter – but they don’t react quickly enough to circuit changes for my use. To perform an IF alignment, I need to use the faster meter movement of the pure-analog meter as it responds better to the tiny variations of small adjustments to trimmer screws. That’s why I like to have one of each around, and they each get used in different situations.

Click the photo for a link to the larger version, where you’ll be given an option to download. 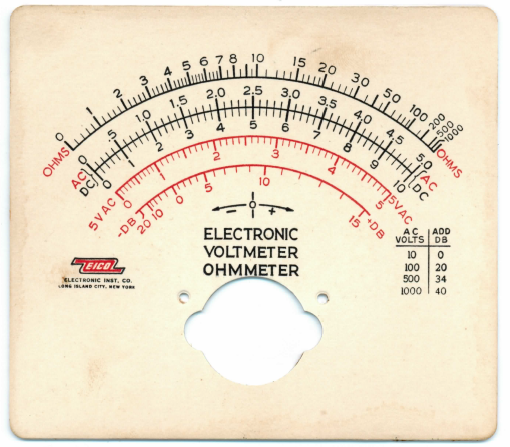