I bought and did a quick setup on my RTLSDR dongle using SDR# a few weeks ago, where I used it to listen to FM radio stations around my area and a few public safety frequencies. That’s all well and good, but I’m much more interested in shortwave listening – when the weather is good, I can pick up a fair number of stations on my Hallicrafters receiver and there’s even more out there that I can’t tune in with that old equipment.

The RTLSDR (only about $11 if you need an extra one) tunes from around 64MHz up through around 1800MHz, but shortwave frequencies are much lower – only up to around 30MHz. Using an RF mixer, it’s possible to shift the signal into the RTL’s tuning range. Portuguese designer CT1FFU developed a mixing upconverter which adds 106.25MHz to the incoming signals, shifting them up into the correct receiving range and filtering out signals about 50MHz to prevent interference. His version comes as a kit which requires surface-mount soldering, but German retailer Wimo offers mostly-assembled versions of the kit which only need the antenna terminals and power connector soldered. 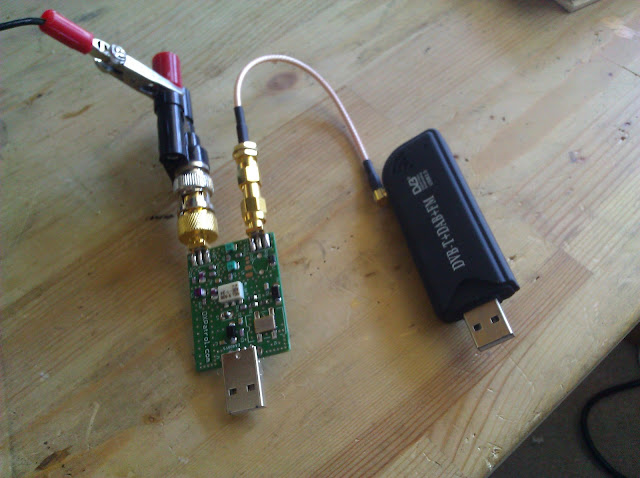 Finding those adapters was a bit challenging – I have a helical antenna which terminates in that alligator clip, feeding into a coax break-out, with an SMA-Coax converter. On the other end is an SMA gender-changer and an SMA to MCX adapter. Ultimately I ordered them from eBay and they work as intended. The USB port provides the +5V power supply for the converter’s operation but otherwise isn’t connected. 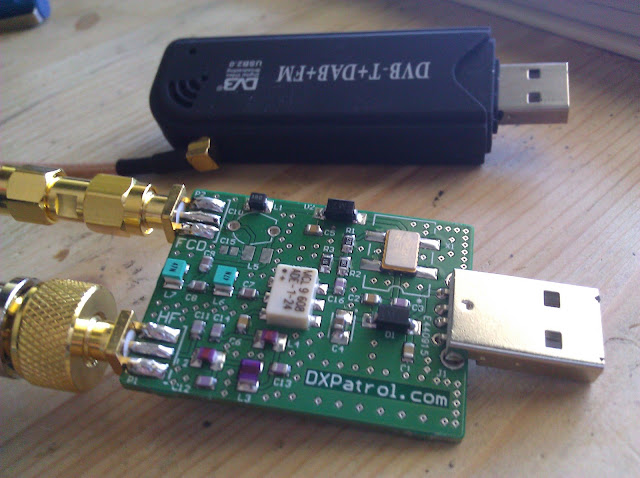 Reception is acceptable. With the aid of the SDR software, I can see where signals are more readily, but issues with my antenna setup and local interference are keeping it from performing as well as the Hallicrafters. I can identify human voices on more stations, but it seems there are fewer I can actually listen to with this equipment. I’ll probably try building a tuned loop antenna similar to this one, and see what I can do with better noise rejection and directionality. I might also add a low noise amplifier after whichever better antenna I end up using.

If anyone has a favorite, easy-to-build loop antenna for 10-160M I’d love to hear about it.

3 Responses to Shortwave Radio Reception with the RTL-SDR Dongle