I’m continuing to work on the Grunow 5-U chassis that’s on my work bench for my customer. This is part 4 of the series, where we’ll be checking the resistors, addressing the control situation, and adding an isolated line input to the radio. Check out a previous entry in the series to catch up on anything you’ve missed.

We left off after Part 3 with all the radio’s capacitors having been replaced. 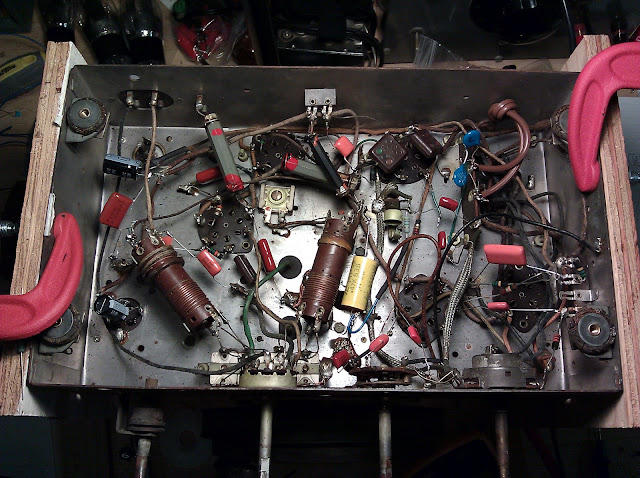 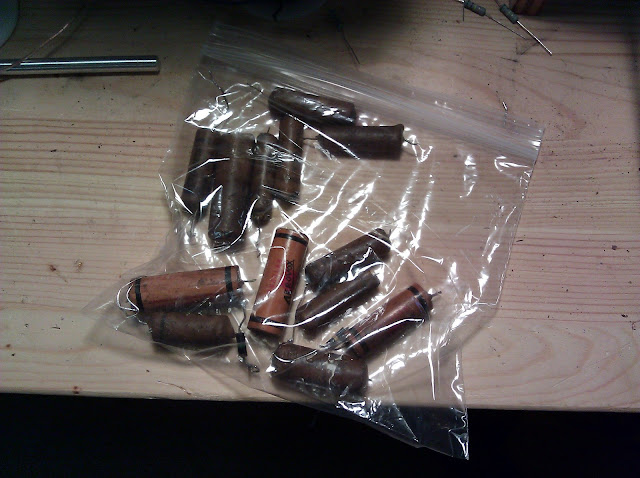 Now it’s time to move on to the next phase of the repair to check and replace as necessary drifting resistors, to repair or replace the volume control, and retrofit an isolated line input to the radio to let music be played from an external source.

The copy of the schematic I’ve been using so far has been pretty decent for replacing the capacitors, but the parts list is very difficult to make out. A couple of the resistors in the radio have color markings that seem incorrect and their entries on the parts list aren’t legible. Nostalgia Air schematics vary pretty widely in scan quality. Fortunately, I located a copy of the original source material: 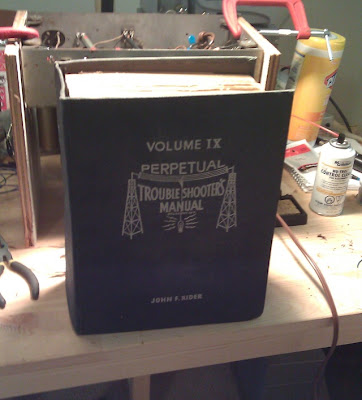 the Perpetual Troubleshooter’s Manual, volume 9. Published from 1933 into the ’60s, these impressively thick (5″) volumes contain original hard copies of schematics for the majority of radios sold in that model year. The parts list is much more legible on this copy. It’s small print but perfectly clear: 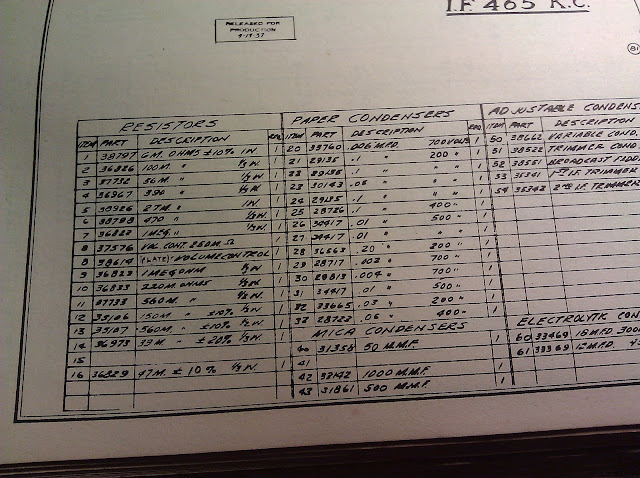 Now it’s time for the real work. We’re going to deal with the volume control first, because it has the greatest number of connections to circuits. It’s involved in the power on-off switch, a tone tap, and the volume. If it’s bad, it would be inefficient to have replaced the components touching the volume control only to have to go back and re-work later.

The lock ring unscrews from the front, and with the connections removed the control pulls out of the back. The control’s case is held on by tabs which are crimped onto the phenolic back board. 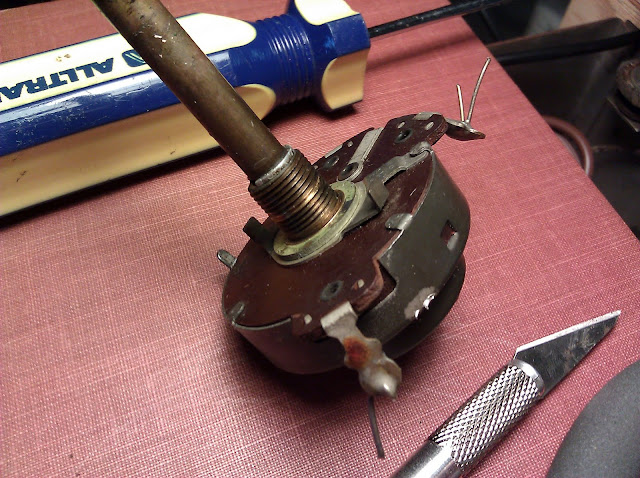 I used the exacto knife to pry the tabs up and release the backing: 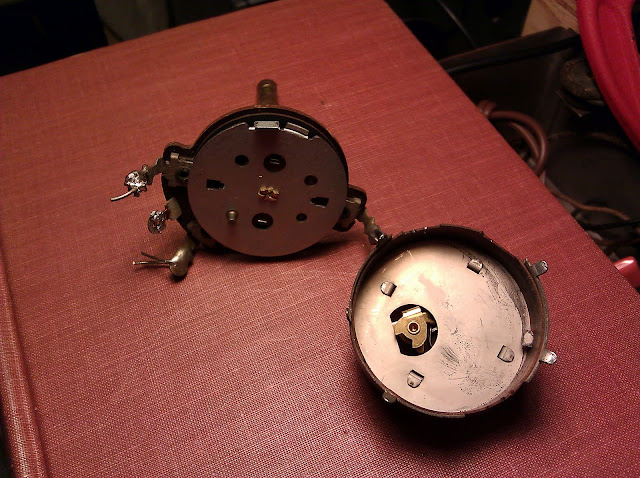 The volume control is now separated into the potentiometer, and the on-off switch on the back. Turns out the volume control wasn’t correctly seated and the switch was making bad contact, reseating the internals quickly fixed that problem.  Inside the volume control pot itself, there’s a carbon resistance strip connected to a metal wiper. The further along the strip, the more the resistance is to the tap. The terminals function as a voltage divider on the signal to control the volume.

In this case, there was built up grime inside the control and the wiper was making poor contact with the strip. A good shot of control cleaner, working the control back and forth many times, and using a q-tip cleaned it right up and it makes good contact throughout its range of rotation now. 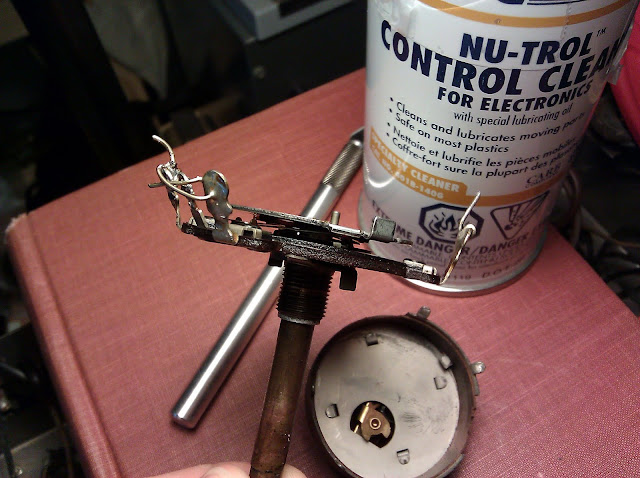 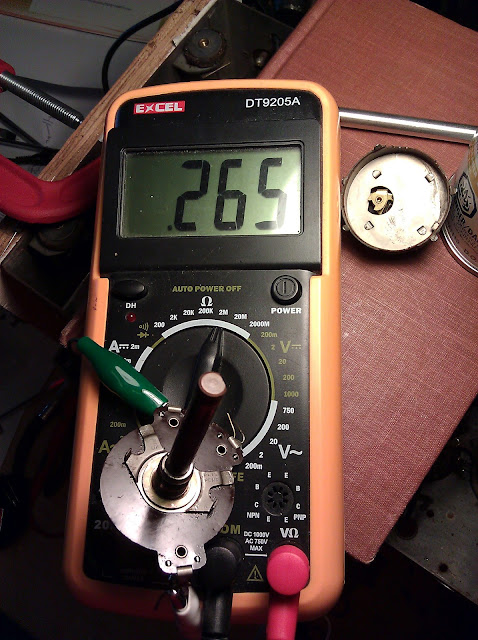 Since the volume control has been fixed, now it’s possible to add an auxiliary iPod input. The center tap of the volume control goes through a DC-blocking capacitor, and then to the grid (input) of the first audio tube. The signal wire from an RCA cable can be connected to the same tap, and whenever the radio is tuned away from a station, the auxiliary will be audible. Because the design of these old radios could introduce a voltage onto  the audio cable itself, I’m also fitting an isolation transformer which will allow the AC audio signal to pass, but won’t allow DC voltage through which could damage the device it’s attached to. 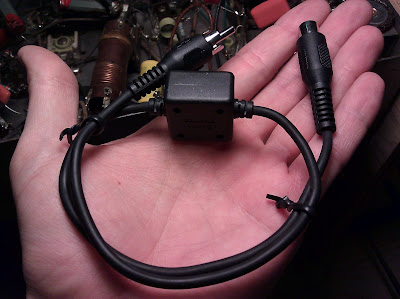 Before I can wire in anything, however, I need to reinstall the volume control. While it’s out, this is a good time to check the resistors surrounding it. 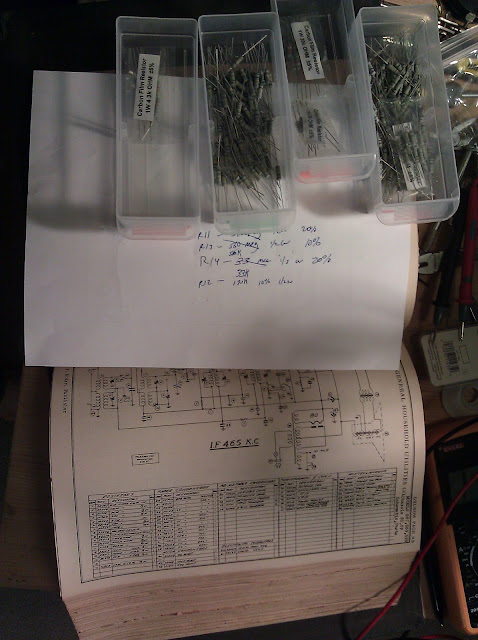 I measured the resistors directly with the multimeter; for resistors with capacitors in the circuit where you can’t get a clean reading, it helps to reverse the leads. It turns out, surprisingly, that most of the carbon resistors around the tube sockets were within their tolerances. The resistors around the volume control needed to be replaced, though, as several were spec’d at 10% tolerance and had drifted by as much at 25%.

I’m using 1W metal oxide resistors to replace the 1/3 and 1/2W resistors. All my replacement resistors are specified at 5% or better to provide many years of consistent resistance. 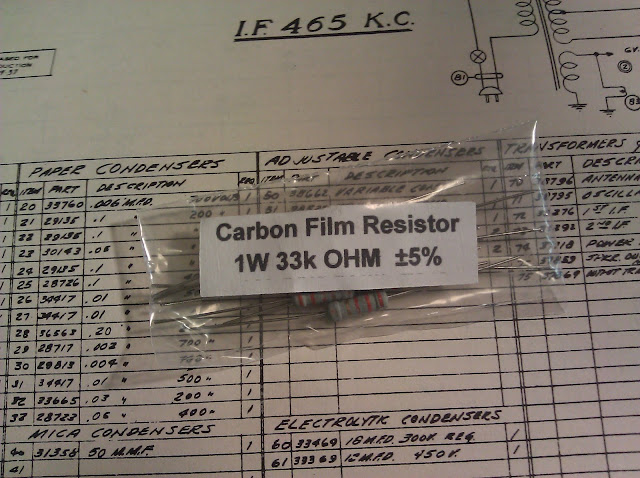 And with the replacements complete: 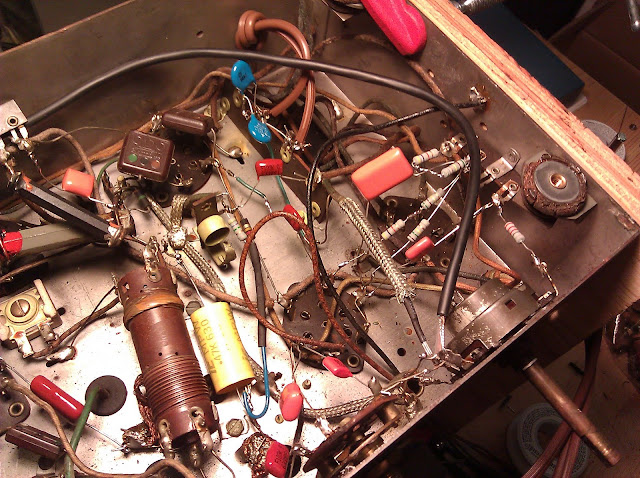 During the process of reinstalling the volume control, the grid cap lead to the 1st Audio tube snapped internally. I had to peel back the shield, solder an extension to match the length of the previous wire, fix heat shrink tubing to prevent the solder connection from grounding to the shield, then pull the shield back out to its original length.

With the resistors replaced, it’s now time to finalize hooking up the iPod input. Connecting the hot lead of the signal cable to the center tap (wiper) and the signal return to the grounded terminal of the volume control, the aux input will now be active and audible when the radio is tuned away from a station. Here’s the completed isolation transformer assembly outside of the radio: 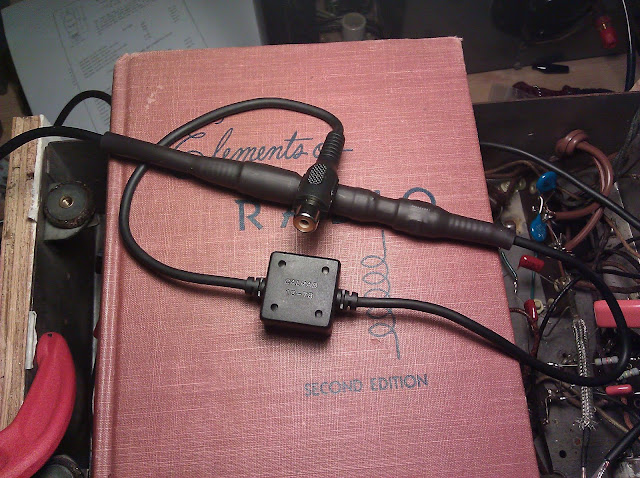 The isolation transformer is designed to be attached between two jacks, so has a male and a female end. I used a coupler to provide two female ends. Because of the serious danger of removing the isolation from the audio input, I used a piece of heat-shrink tubing slid over the entire chain of connectors to seal it in form-fitted plastic. This safely ensures the connections will be maintained – and also will keep dirt from getting into the connectors and causing reduced performance.

We’re making good progress towards completion, and was lucky that the band switch also just required an internal cleaning to restore proper operation instead of a complicated replacement operation.

Up next, I’ll be doing some housekeeping in preparation for the radio’s first start-up after service to check the functional condition of the work and assess playing condition.