Parts Express sent me an advertisement for a $45 capacitance meter today. This actually a pretty good deal, and it’s a useful thing to have around if you’re doing electronics work. I’d probably have bought one myself, if I didn’t already have both a $14 model. 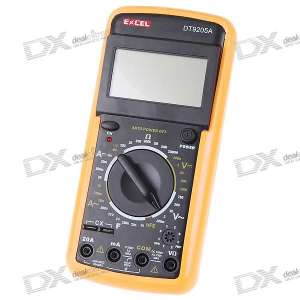 The trouble with the small meters is they only test at a low voltage. The working voltage ratings of many capacitors are in the hundreds of volts, and if they’re in a circuit where those voltages are present a low-voltage tester may pass a cap that is in fact faulty at higher voltage. That’s where vintage gear comes in, it’s a little harder to work but has a lot more features. I managed to purchase a pair of these EICO 950 capacitance/resistance bridges for $5 each from a salvage shop. They’re ’50s era bench devices to measure, test and compare unknown capacitors and can not only measure unknown values, but perform leakage tests at up to 500V.

They’re a little bit more complicated to work than the digital meter, but a bit more versatile.

The EICO 950 can measure from 10 pF – 5000 uF. Not as low on the low end, or as high on the high end, as the digital model, but I’m not working with any capacitors smaller than about 50pF or larger than about 50uF, so the shortened range isn’t a big deal. These are bridge instruments, where you’re comparing your capacitor to either an internal reference or to an external standard. Turn the dial until the indicator shows maximum shadow, and read the corresponding number off the dial. If you can’t get a fully expanded shadow, you know the capacitor is defective.

Cover off, the back view. A very simple design only uses 2 tubes – one to indicate, and the other supplies the power. The old capacitors will need to be replaced as they dry out and leak over time – exactly what the instrument is designed to test for, but it won’t work without being serviced itself.

Since I have two identical models, I only refurbished one. I’ve used the unrestored model and the restored model together in this post as representative “before” and “after” models. This is the “after”: capacitors replaced by newer, heavy duty models. Not all of them needed replacement so I left a couple of the original ones intact.

Vacuum tubes have a nice glow while running, it’s very attractive to look at.

Bright eye tubes in original equipment are tough to find. The eye is similar to the phosphor inside of a CRT television; it wears out and grows dim with use. At the bottom, the wide dark sector is the shadow; currently shown at its widest point where you would take the measurement.

The reassembled tester is checking out a modern Sprague 8uF +/- 20% capacitor. It’s reading a little lower than 20% but that’s because I haven’t recalibrated the tester after changing the parts. In addition to moving the dial, you can select the leakage test (paper-mica or electrolytic test) on the dial. This disables the capacitance/resistance dial and ties the action of the eye tube to the working voltage selection. If the eye stays approximately fully open through the full working range of the capacitor, it does not leak. If the shadow closes and the eye goes fully green anywhere in the range, it means it is leaking at that voltage and is not suitable for use.

In total, the pair of vintage testers from the salvage shop and the replacement parts set me back about $15 total, plus about 20 minutes to replace the parts. I really only use it for leakage tests, as the small meter is I hate to admit faster for telling me if the cap is dead-short or dead-open, which is more common on the old sets anyway.

1 Response to Refurbishing a Capacitance Tester