A bit different from the run of Series I and Series II that I usually see, I got to fix up this Bose 901 Series IV Active Equalizer which was sent to me from Austin, TX. The Series IV was sold from 1978-1983 and its construction reflects this. 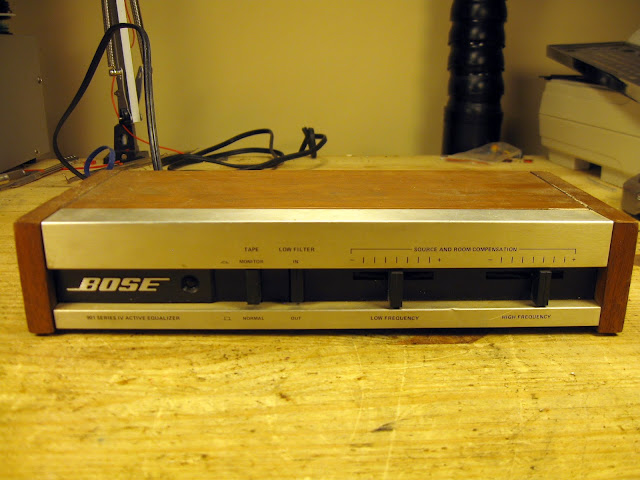 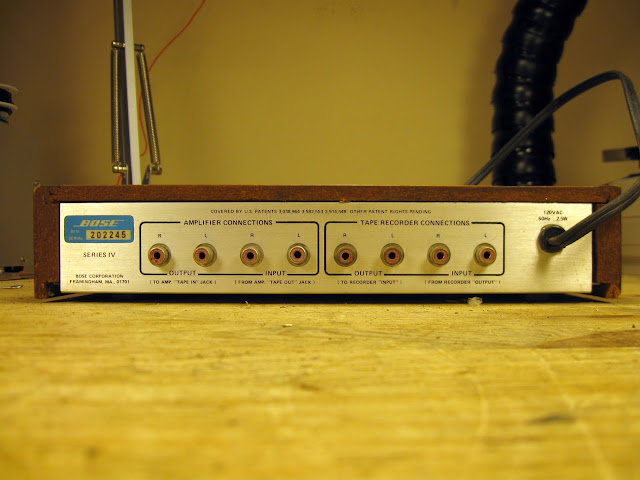 The PCB on this model is single-ended, so can be completely removed from the chassis. 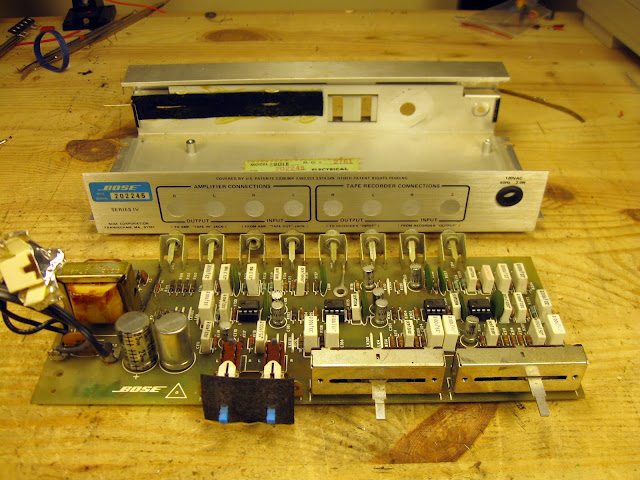 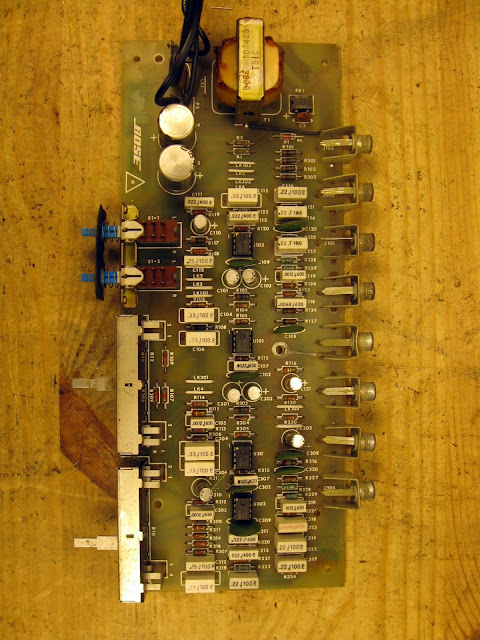 This unit came to me with one channel dead. The standard service for the Bose 901 Series IV Active Equalizer includes replacing the electrolytic capacitors and op-amp chips by default for best performance. Other parts are replaced as needed, but Bose used stable resistors and high quality, stable, true film bypass capacitors in this device so there’s no benefit to a wholesale parts replacement like on the Series I/Series II. 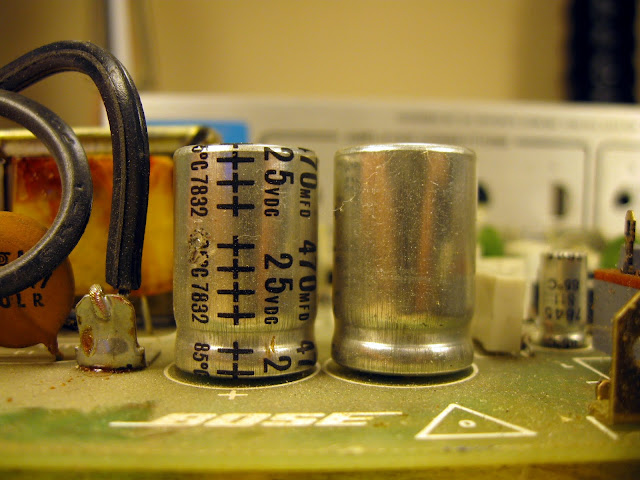 The 901 Series IV is the first of the active equalizers to use op-amp chips instead of discrete transistors. In this case they’re LF353N op-amps; Bose used the LF335N, TL072, or 4458 op-amps interchangeably and the schematic and service manual allow for any of those chips. Very nicely, they’re all socketed – these early op-amps weren’t that reliable and often developed noise and distortion over the years. 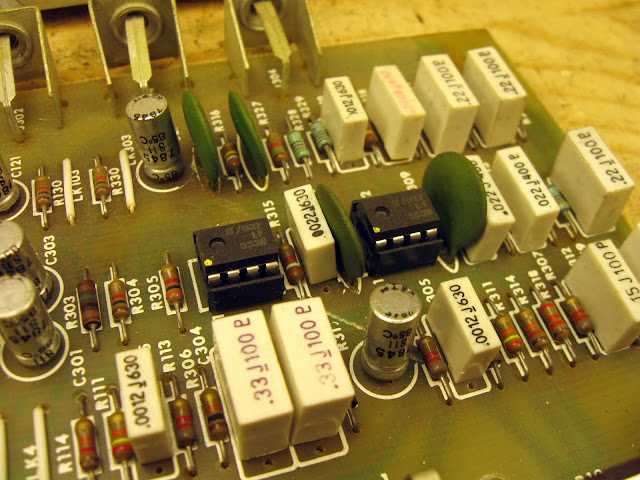 The electrolytic capacitors in this equalizer were about a decade better condition than the ones on the S1/S2, but they were universally bad. 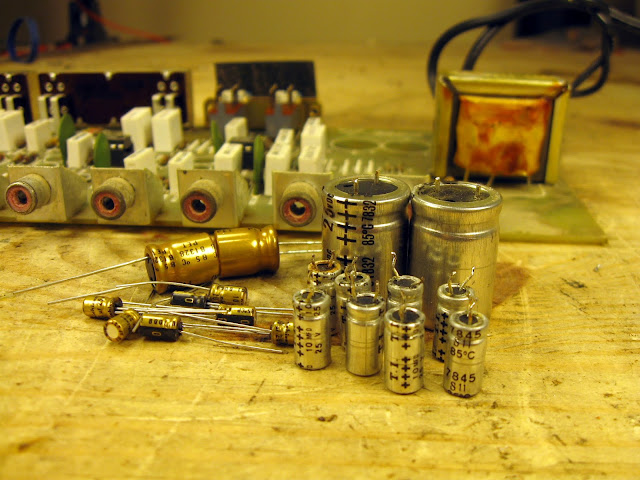 I use a variety of manufacturers for premium replacement parts depending on what’s in stock at any given time; in this case it’s getting all Nichicon Gold capacitors. Every single one of the originals had high ESR and was changing in value. 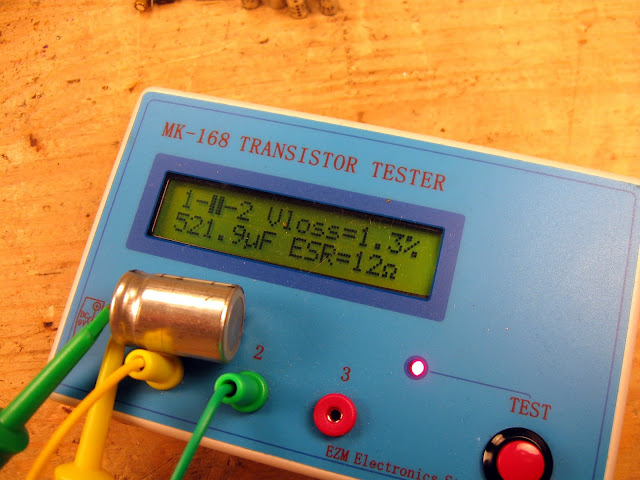 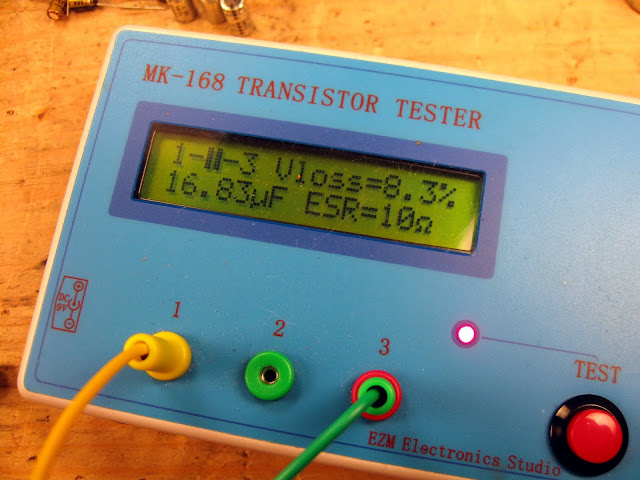 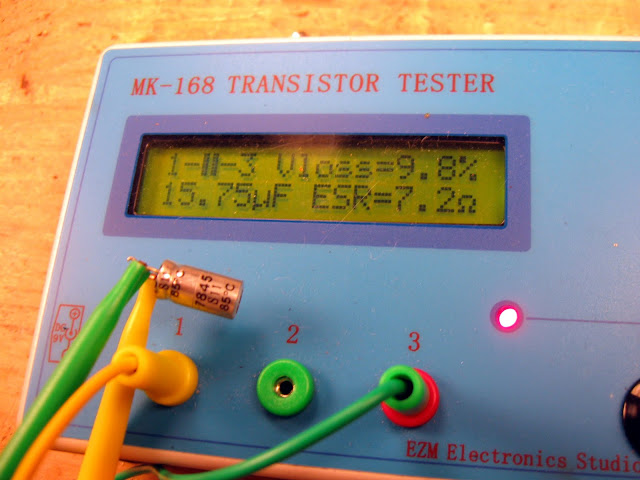 These were definitely causing some issues – most likely, noise and distortion, although since they would have degraded over time it might not have been obvious. This capacitor, though, was the specific one which caused the channel to go out. It’s measuring only 157 pF, nearly open. 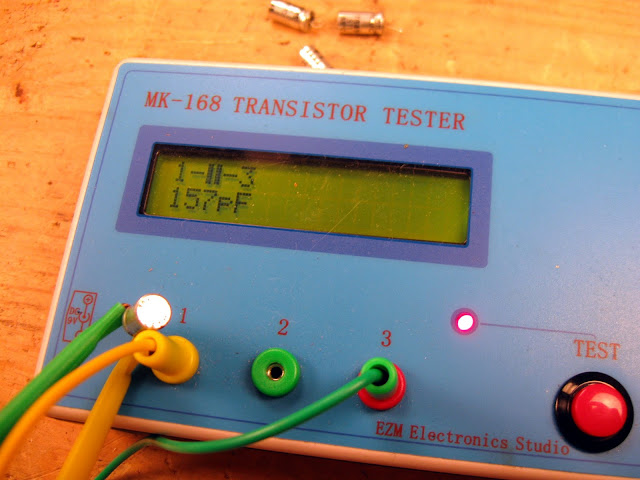 In contrast, a good new cap: 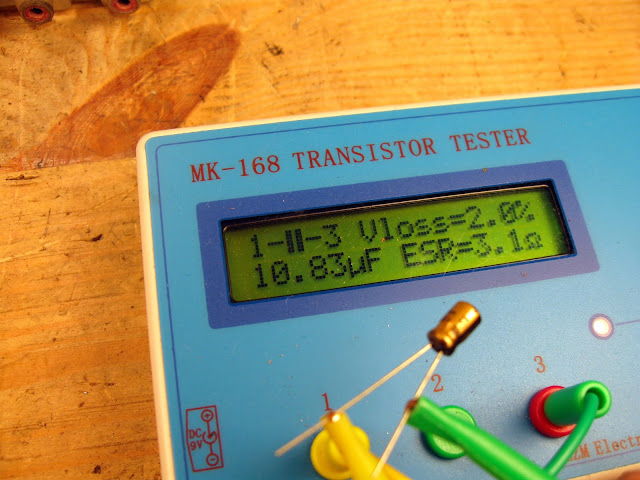 And some residue on the board: 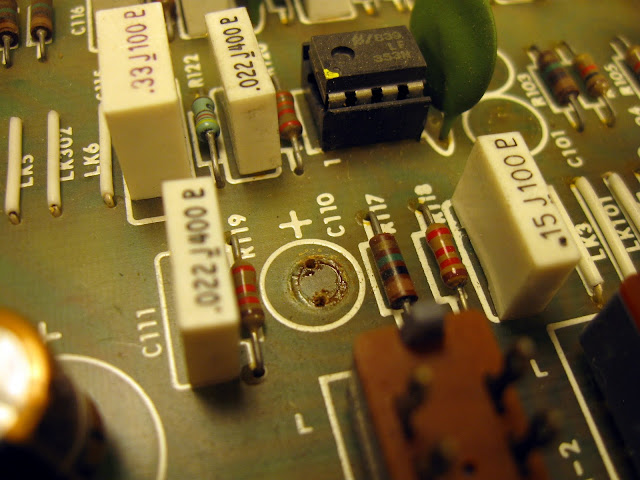 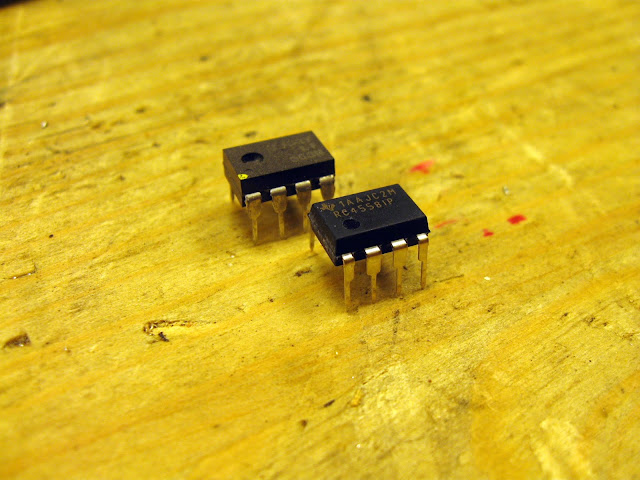 Then it was on to bench testing! 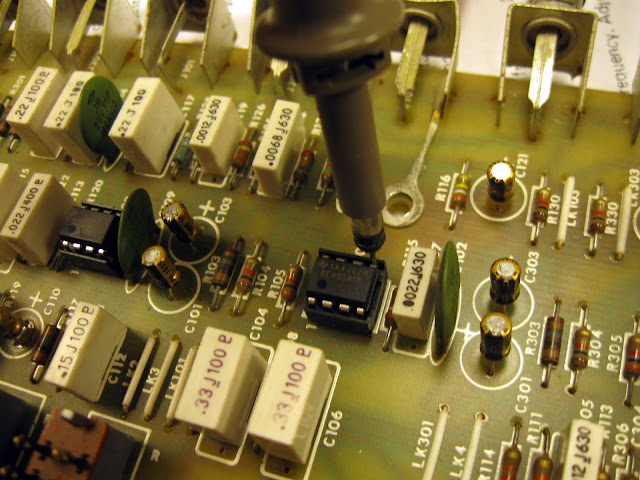 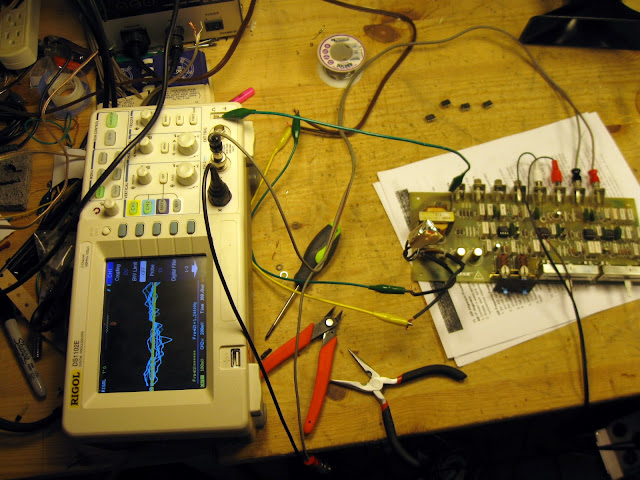 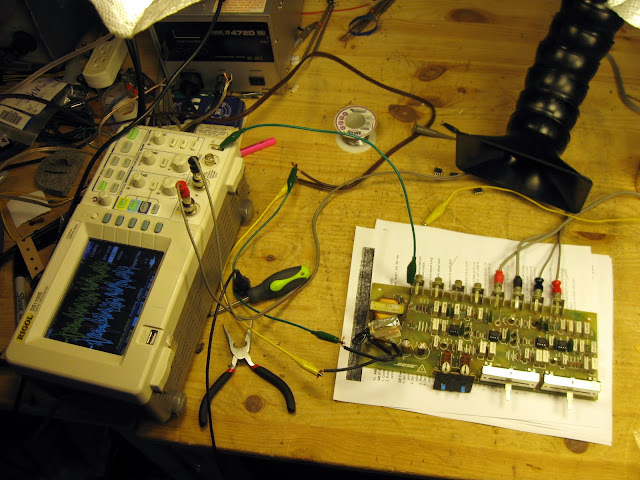 There we go! With it checking out on the scope, now I moved on to a frequency response and live listening tests. The curve came out textbook:

The Series III/IV share an interchangeable curve and it is very different from the Series I/II curve. 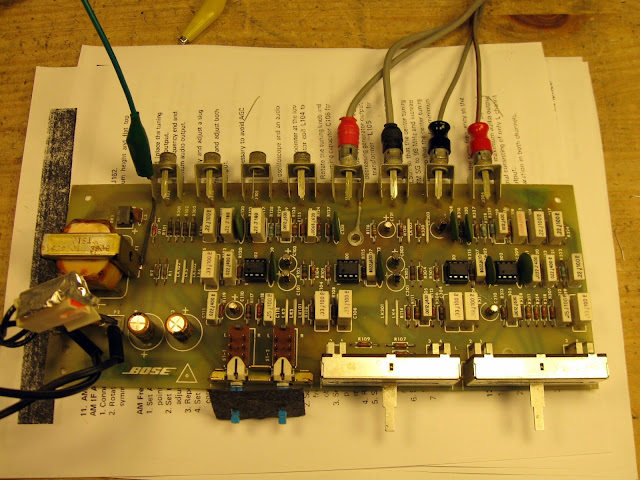 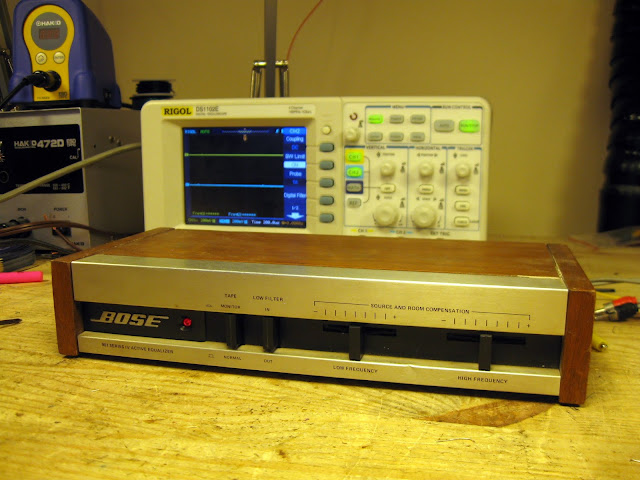 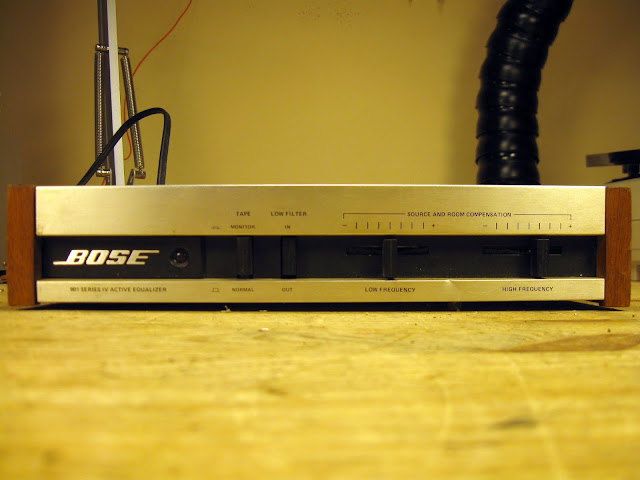 Fully serviced, this should last a long time to come. The Bose 901 Series III/IV speakers have foam surrounds which can degrade, so that’s worth watching out for, but this equalizer is back to top shape.

Check it out at Rain City Audio