A friend I’ve made through the antique radio community is also a repairman himself, but ran into some scheduling difficulty with a piece of work on his bench and referred the chassis over to me for service while he dealt with his scheduling conflicts: an RCA 9X561, from 1950. 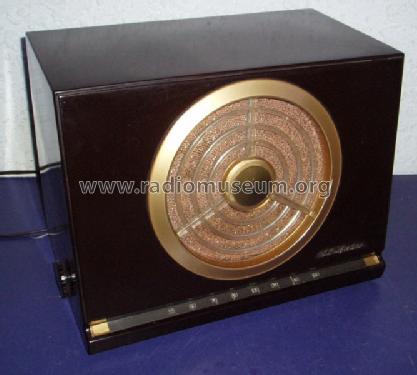 This RCA is a simple and straightforward radio which came to me with 75% of the work completed; my task was to finish off a few odds and ends to bring it up to 100% condition. This turned out to be a bit more interesting of a task than I’d suspected it would be.

I apologize in advance for the poor quality of all photos that will appear on my blog now and into the foreseeable future. Both of my digital point and shoot cameras have since given up the ghost after 5 and 7 years of service respectively – I’ve been taking these photos for quite a while using my cell phone’s built in camera. It delivers acceptable quality in most situations, but unfortunately, its lens has been scuffed beyond the point of buffing out and all future images are going to be somewhat poor definition. (If you find my writing here useful and care to donate securely via PayPal, it would be much appreciated!)

The radio, speaker and chassis arrived alone without the case. 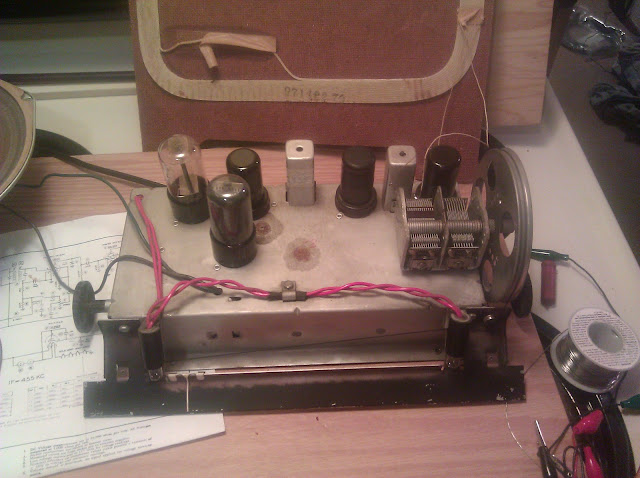 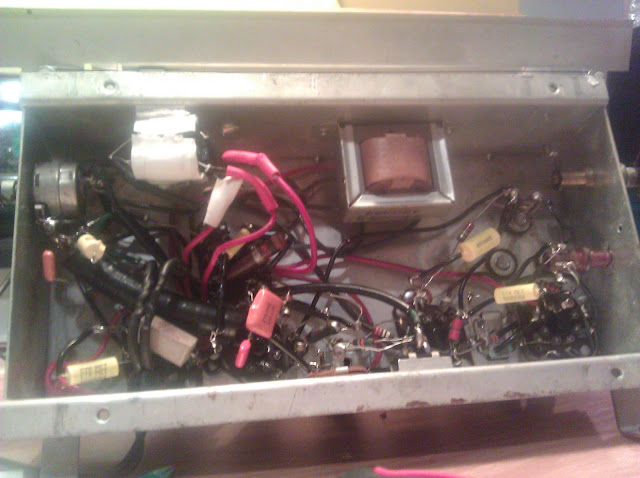 Two capacitor leads were broken, as was a lead from the second IF transformer. 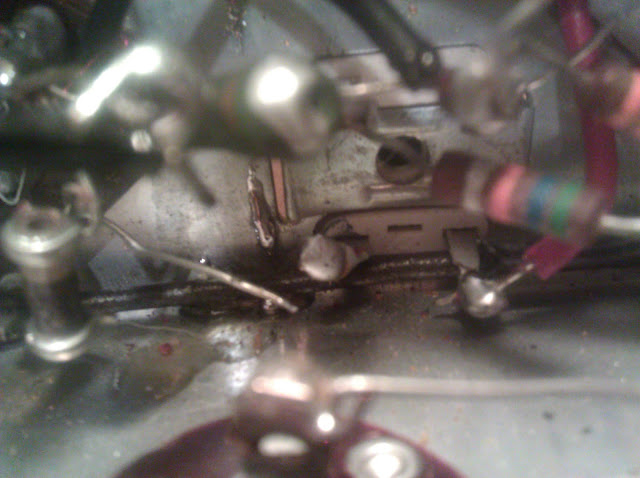 I replaced it with a new segment of wire to replace the now too short broken one. 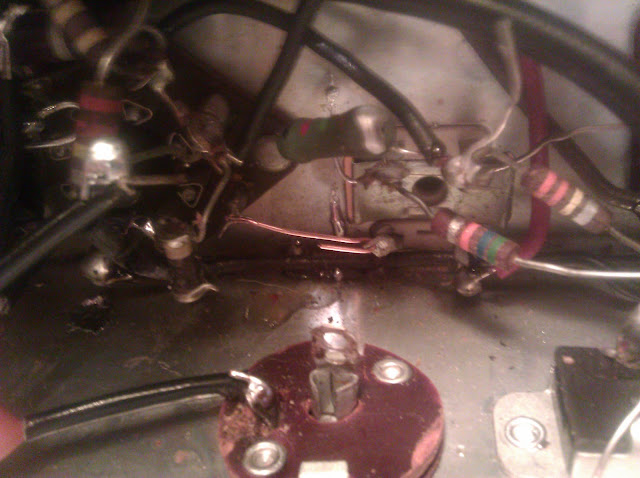 One of the capacitors which had come disconnected was C3, a 0.05uF bypass capacitor located physically near the oscillator section shown in the center of the photo below. 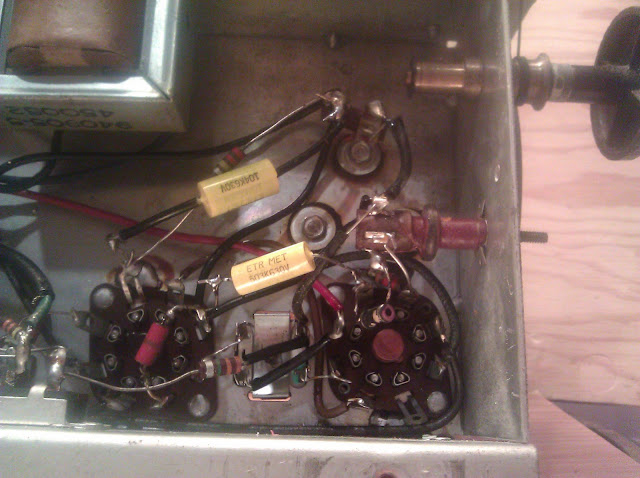 I reconnected and set out the process of final tests. 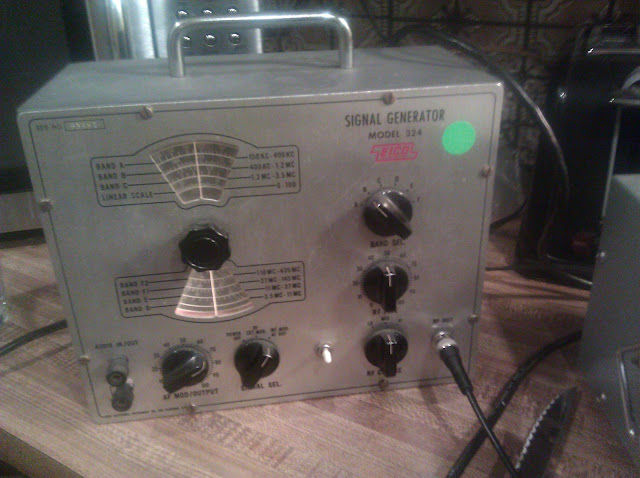 The IF chain was fine, but the radio seemed not to want to oscillate. I went through a fair bit of troubleshooting – inject the IF signal into the cathode and grid of the 12SA7 mixer to replace the local oscillator, swapping known-good tubes, using another radio to find an oscillator beat note – nothing at all. The odd part was that it wouldn’t work even with an injected oscillator signal – something which should definitely get the radio going again, and generally identifying the problem with the oscillator. 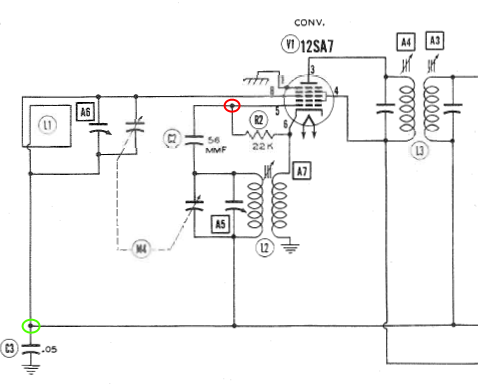 This one is very simple. A set of coils, a resistor and a capacitor. The coil was intact on both ends and the resistor and capacitor were within tolerances, so I took another peek under the circuit. It turns out that I’d made a mistake reconnecting the broken lead. C3, the bypass capacitor, was connected at the junction of C2 and R2 (indicated above in red) which had the result of completely bypassing the local oscillator to ground – including when I would inject a signal from the generator on pins 5 or 6. The correct location for the connection was the lower left circle indicated in green.

I moved the capacitor from the converter tube over to a tie point on the secondary of the first IF transformer, and the radio pulled in stations instantly. 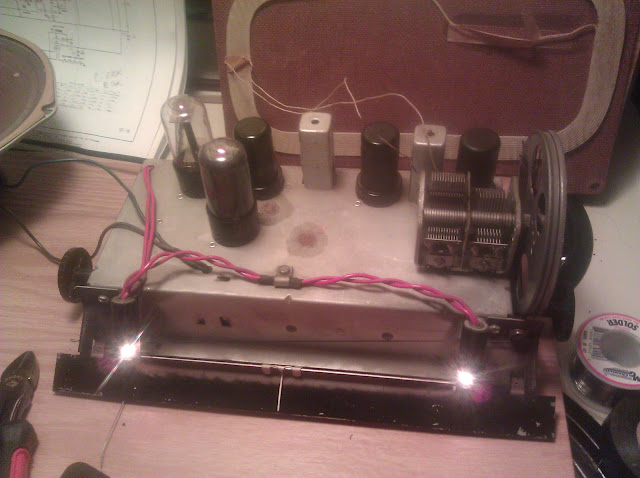 That missed connection was an easy way to kill a few hours troubleshooting, but it all turned out in the end. The radio is back to my friend to return to his client later this week.