This Bose® 901 Series II Active Equalizer was originally a European unit, designed for a 240V mains supply. Most if not all 240V equalizers with U.S. style plugs were sold on military bases in Germany and elsewhere, and returned with their owners when reassigned back to the United States. This one had been serviced previously, and converted back to 120V power at that time.

This unit had been serviced somewhat recently, and was fitted with radial Nichicon electrolytic capacitors, but even these replacements had failed (probably after 15 or so years) and were due for a replacement. 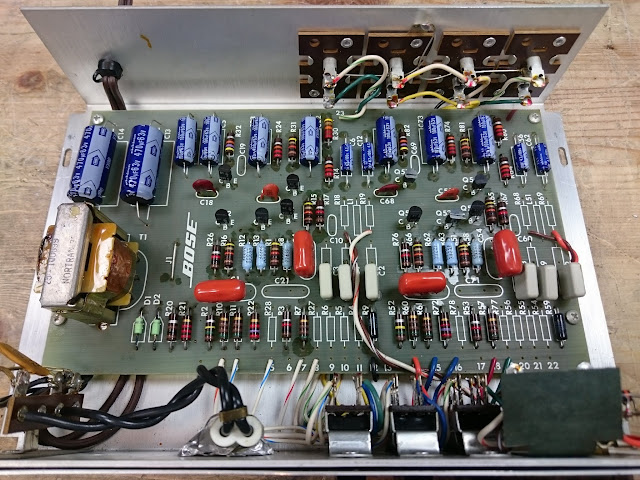 This equalizer’s owner requested an upgrade to film output capacitors, which happen to have a thicker lead than the electrolytics. This is a job for the shop set of carbide PCB drill bits, available from 0.1 to 2.0 in 0.1 mm widths, to expand the holes safely and easily.

Next up was a set of new gold-plated RCA jacks.

To ensure the new jacks have good grounding, while the phenolic boards holding the original jacks are destroyed during their removal, I leave a small segment holding the rivet and extra grounding terminal.

With tons of replaced parts, this is a great looking and great sounding equalizer that’s even better than new, and should last for a long time!