I just had another Bose 901 Series I equalizer through the shop for the standard service. It didn’t have a visible serial number, but is definitely a very early production version. The Active Equalizer was revised once through the model’s production run, with serial numbers below about 10,000 being a substantially different PCB layout from the Second Production equalizer. I don’t run into these Early Production ones very often, and each one is a little bit different. Towards the end of the first production run, they started to appear with riveted jacks but this early version has screwed down jacks on the rear. It’s always interesting to see what variations there were before they standardized on the later design.

Bose 901 Active Equalizers, along with Bose 800, 402E and 802 controllers often need service these days, with more and more original units failing as they can now be over 45 years old. By replacing all of the leaking capacitors and resistors which have drifted from their nominal values, they can be restored to perform like when they were new! 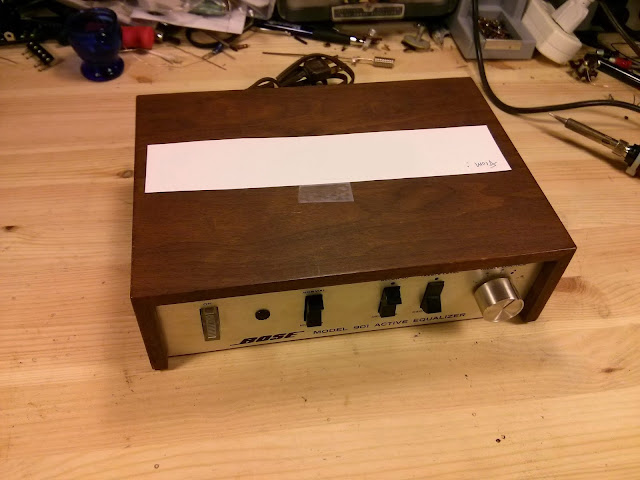 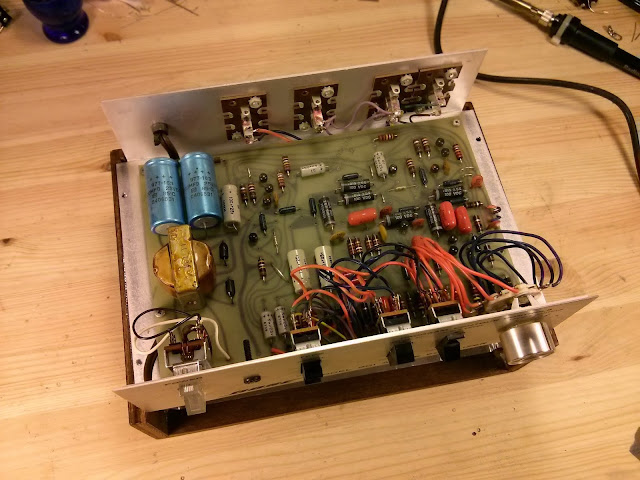 The Series I Early Production boards have no solder mask and so no component labels on the top side. The circuit has some major differences to the circuit of the Series I Second Production equalizer, but they function the same. Double-checking is the way to go to here. In the Second Production equalizer, there are 2 large and 7 small filter capacitors plus the four output and feedback capacitors arranged on the top row towards the jacks in a line. The layout is more chaotic on this early board; the wiring to the switches also has quite a bit of slack in it. 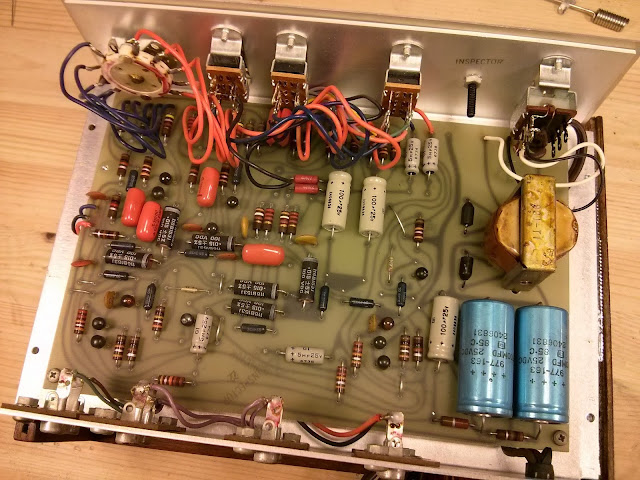 The Early Production equalizer users 12 transistors, 2N3393, with 10 wired up as amplifiers and 2 wired up as Zener diodes, bypassed by 3.3 uF capacitors. I’ve replaced the 2 extra transistors with discrete Zener diodes and the original leaky package transistors with brand new TO-92s of the same number. In the case of this early version, the original transistor packages seem prone to failure, and I’ve never run into one without dead original 2N3393 so they’re all replaced immediately now.  The second production version used 2N5088s, and realistically they’re interchangeable, but I stock both so each can be replaced with the original part number. 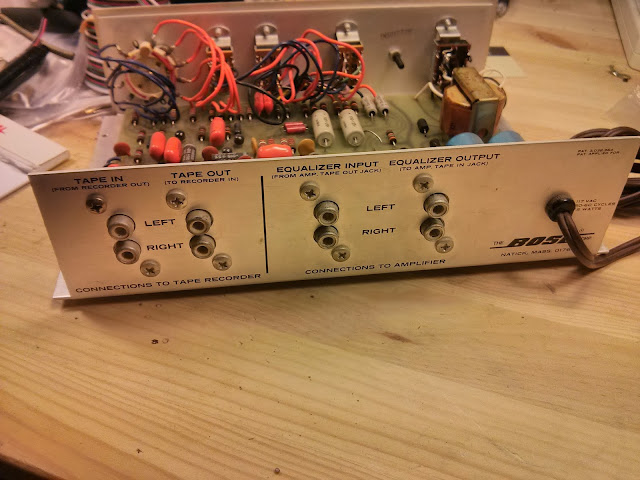 This one is in very good physical condition, it looks like it has been stored very well. The switches were a bit sticky, but a careful application of contact cleaner followed by working the switch cleaned it right up so it’s much improved.

Shining a light from beyind the board, it’s easy to see the traces on the back side. The new transistors pinouts are different from the original, so they mount differently in their sockets: 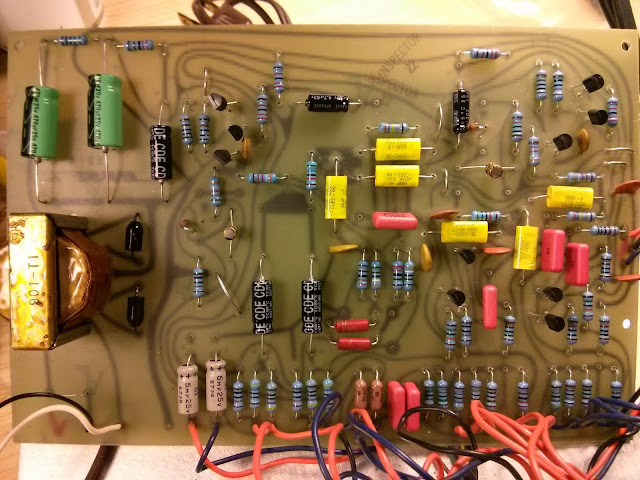 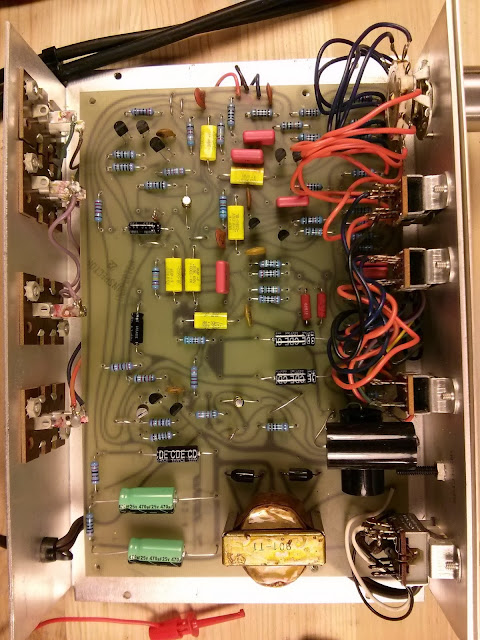 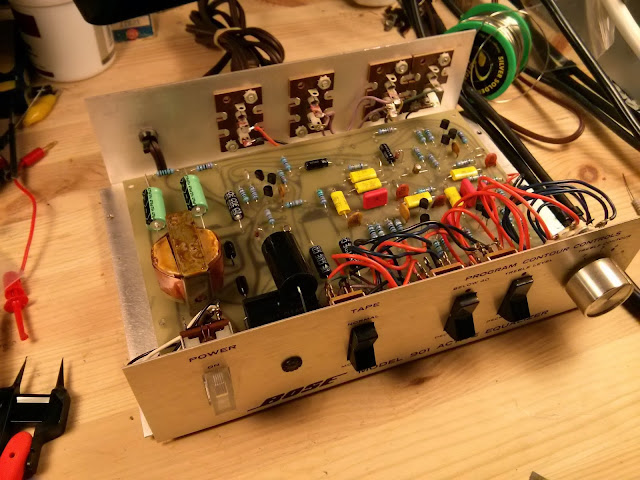 This equalizer received a complete reconditioning, and an upgrade to the output capacitors to audiophile-grade film capacitors – these really help bring out the fine details in the music that aren’t there with the electrolytic output capacitors. This is one major advantage of technology today – and simple upgrades like this at the time of service can bring some modern improvements to these classic speakers. 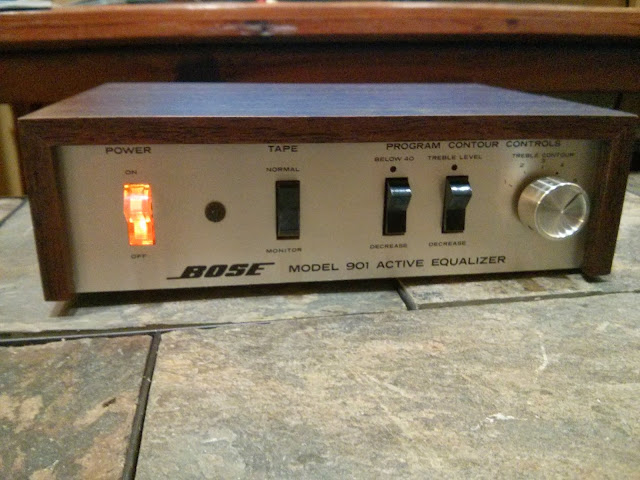 The Early Production equalizers take a bit more time to recondition because of the board layout, but they’re very enjoyable to work on. The PCB swings up with all the connections on one side, so nothing needs to be de-soldered from the panel to service the board, and the traces tend to be wide and easy to solder to. With these repairs, this equalizer is going to sound fantastic for years to come.