I got this Bose 901 Series II equalizer in for repair recently and have finally had a chance to send it back out! It’s going back to its home on the East Coast to be the centerpiece of a Bose 901 Series II system that’s being brought back to life. 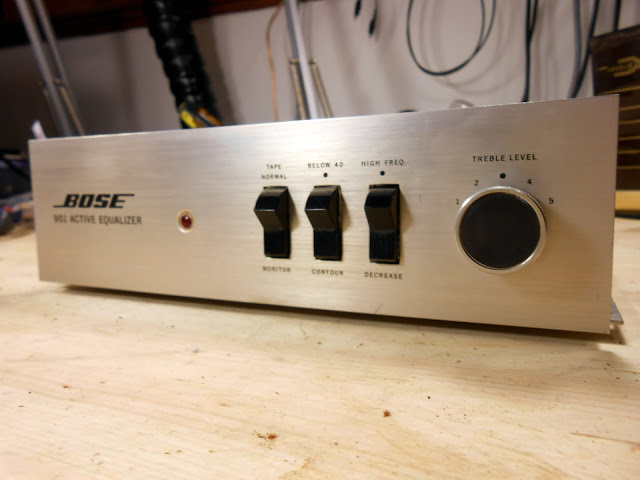 This one arrived in what looks to be all original condition. 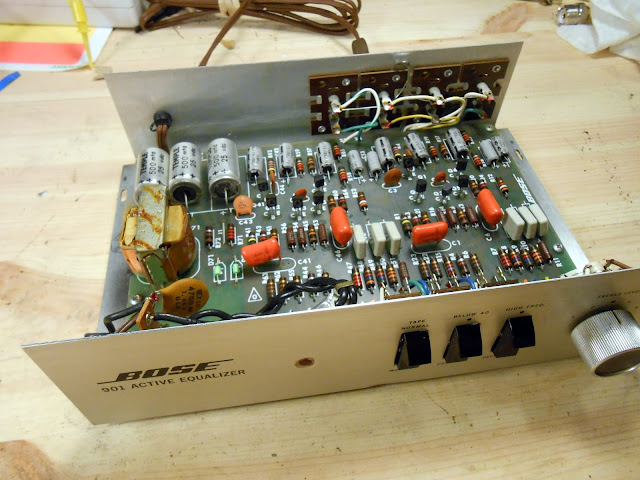 It’s showing its age, though. The filter capacitors have started to leak visibly. The seals on the ends of the electrolytic capacitors can wear out with age and let the electrolyte out and moisture in, which will lead to failure. 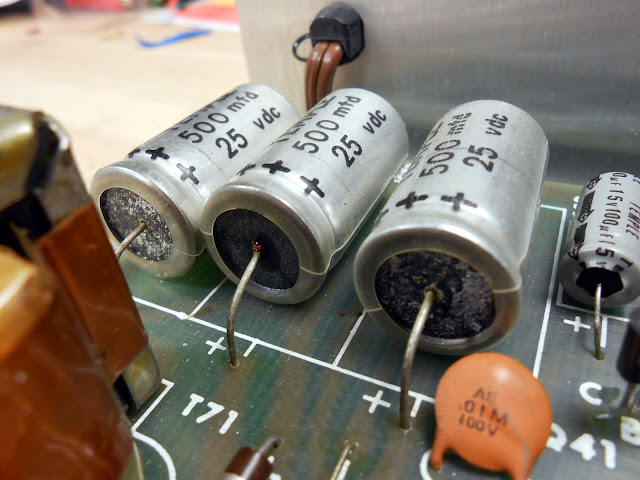 The smaller filters, and output capacitors, look like they’re starting to seep a little bit as well. 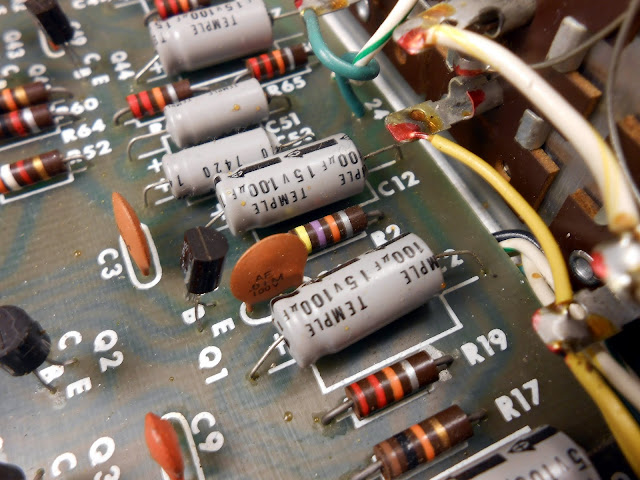 I set about replacing the capacitors as is standard on all of my repairs; I tested the pulls to see some of their health. 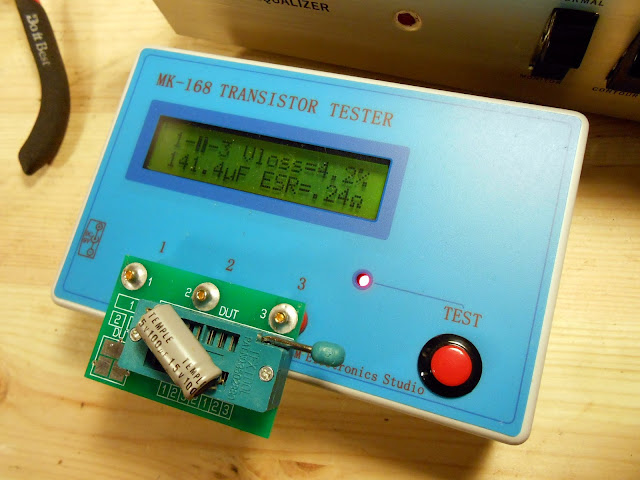 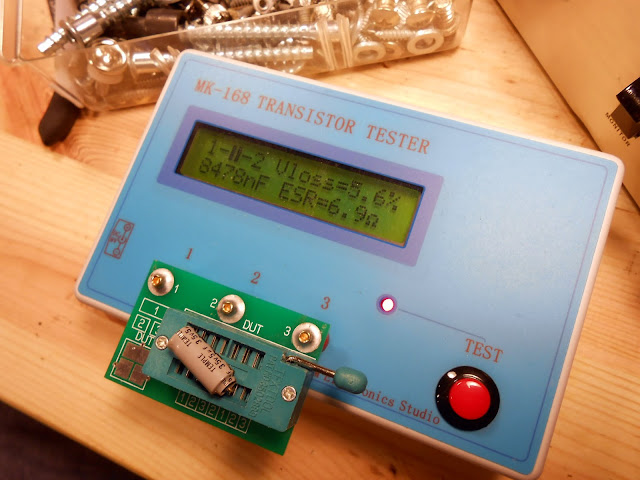 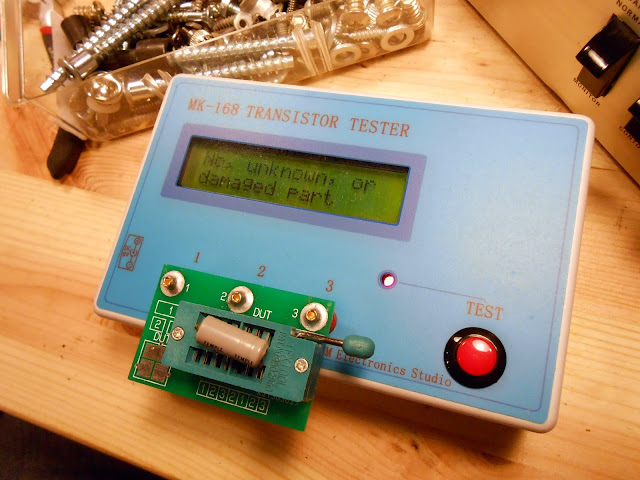 I also replaced the film capacitors with brand new units: 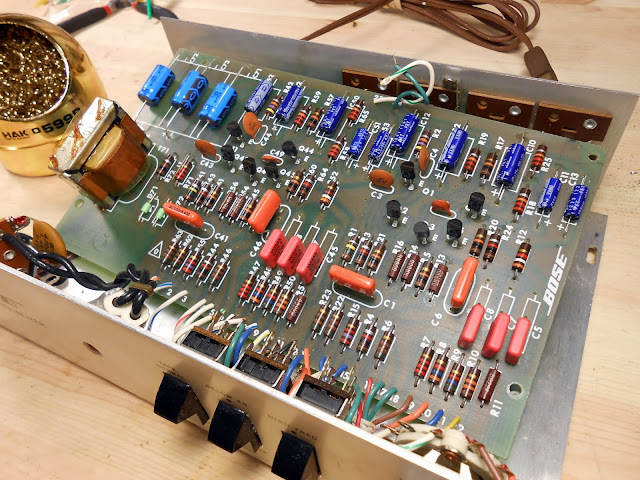 It’s time to test the transistors; I’d hate to get further down the line. The same multi-tester has mini-grabbers which are perfect for gripping the transistor legs in circuit. 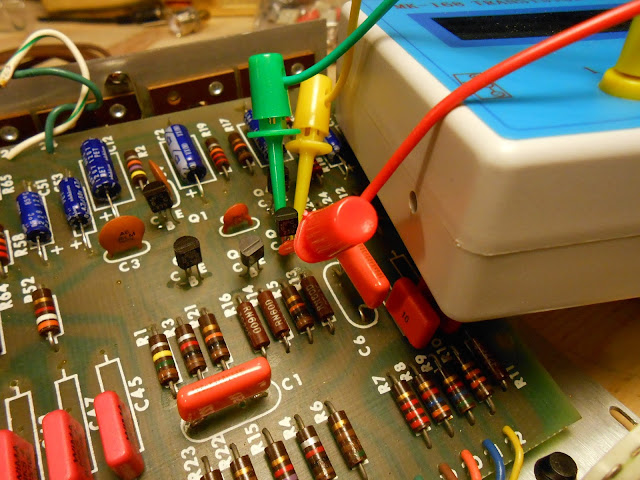 This tester automatically identifies ECB and characteristics; I’m checking to make sure they’re all showing about the same. 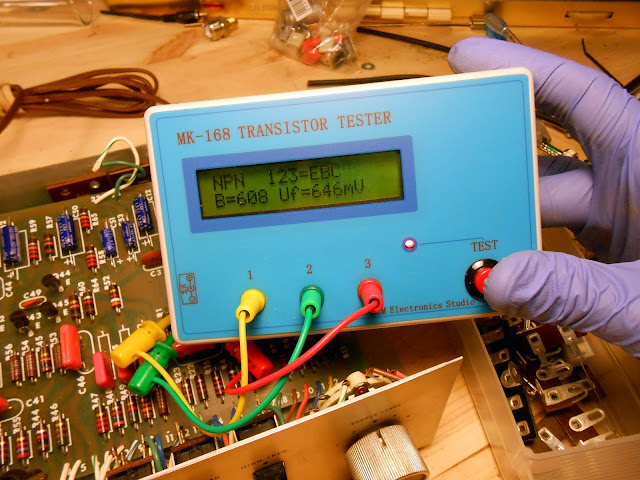 Next up, replacing the resistors with precision, low-noise metal film models. 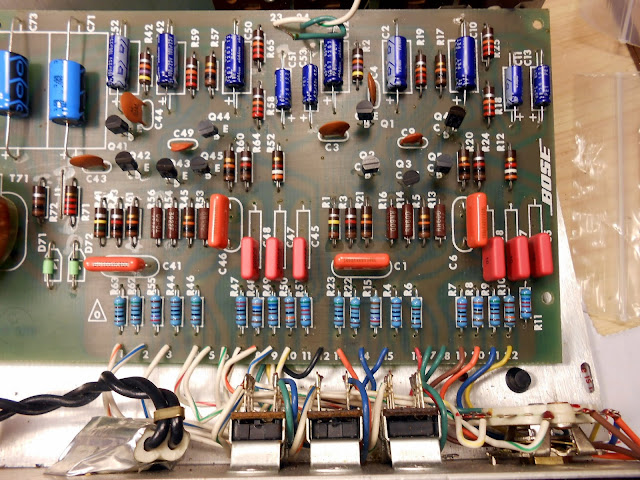 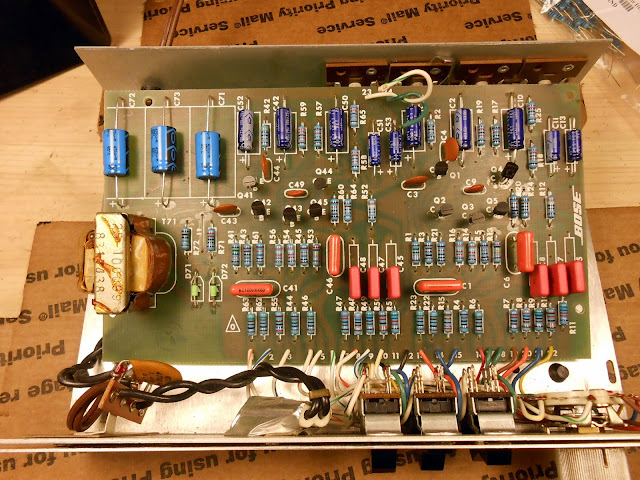 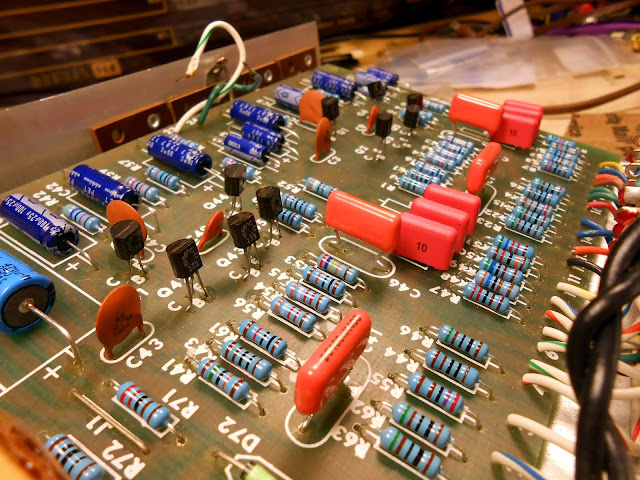 I tested some of the replaced resistors, too. I’ve seen as bad as +35% in other Bose 901 equalizers. The Series I seem to have the worst drift, but this Series II had some significant drifting as well. Drifted resistors can throw off the carefully designed equalizer curves and keep the 901 system from reaching its potential. 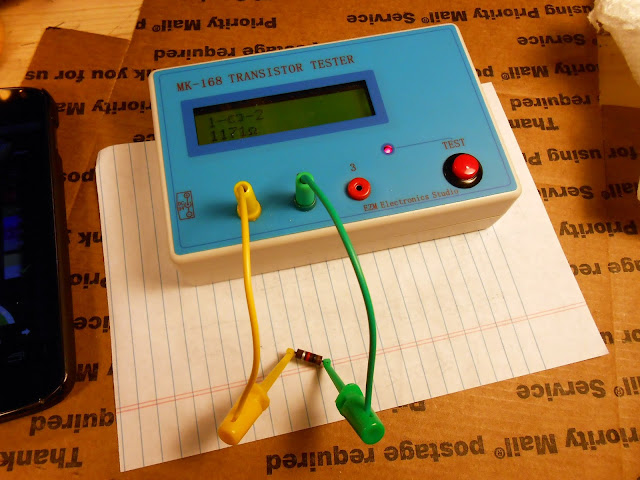 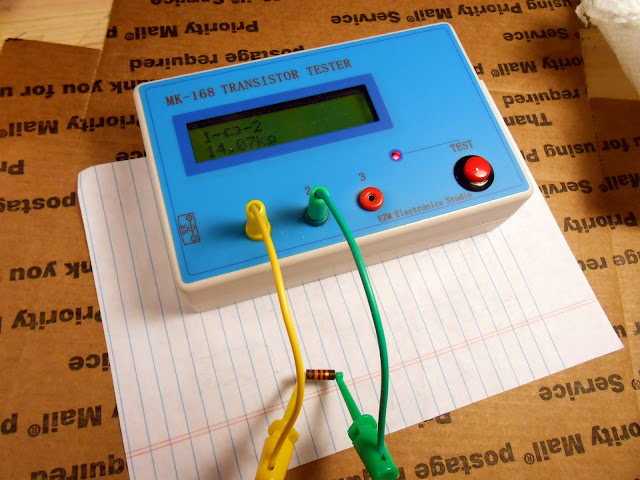 As it turned out, the neon indicator lamp had also burned out – the metal-glass interface where the leads exit the envelope frequently gets loose and the neon leaks out over time. Unfortunately, a camera mishap deleted the “pre” photos of the replacement process. The neon lamp and leads can introduce interference; at the time these were invented, LEDs weren’t available but a low power, low heat light source was required. To get around this, Bose used aluminum shielding tape over the light. I removed this tape, slid the housing off, removed and replaced the NE-2A neon bulb, coiled up the leads, reattached the bulb in its housing and placed it back on the panel.

This did, as expected, produce interference – so it was time for replacing the shielding. I opted for copper shielding tape; this is commonly available and is period-correct (in fact, the power transformer is already shielded with copper shielding tape from the factory.) I shielded the entire length of the leads as well, so there’s a bit larger. This tape is both solderable and has a conductive acrylic adhesive for a variety of shielding options. 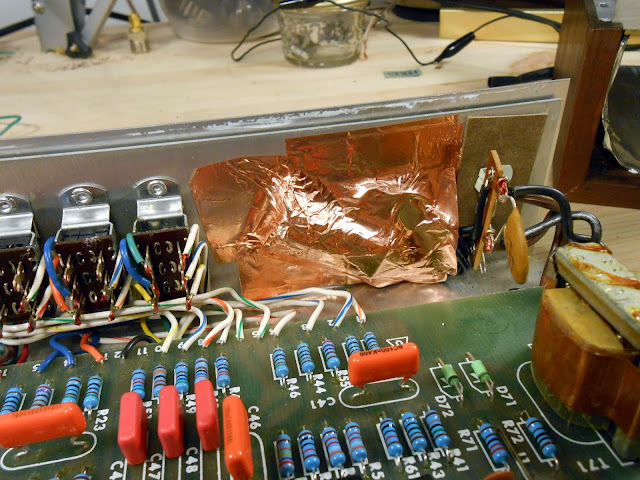 All in all, it’s looking pretty good – and burn-in testing with my set of 901 speakers proved it sounds great, too! 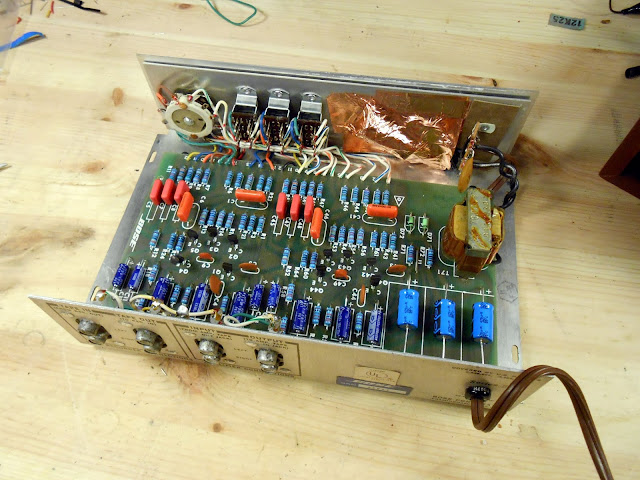 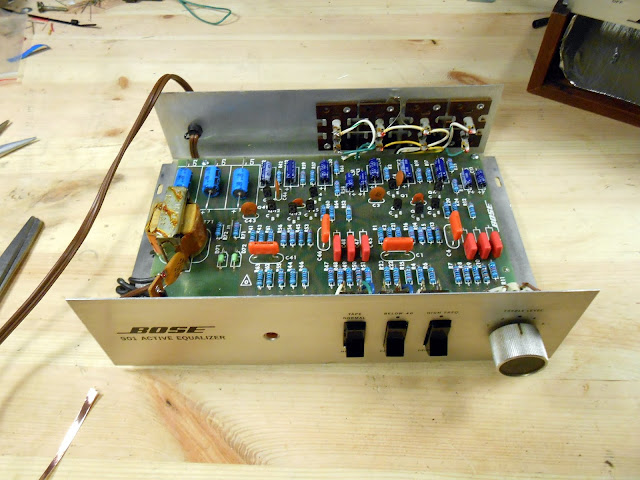 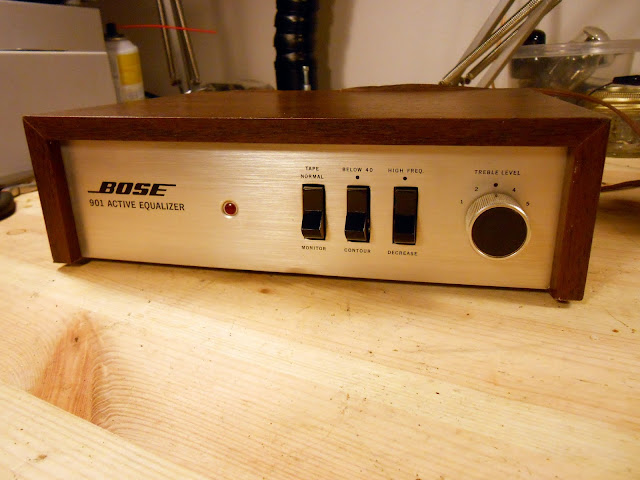 This equalizer will return home for many more years of faithful service! One more back to its full potential, but there’s plenty more out there to fix.

If you need your Bose 901 Series I, Series II, Series III or Series IV equalizer repaired for a low flat rate, please contact me.