Don’t Trust Everything You Read (On Old Radio Schematics)

Electrical drafting is primarily done on a computer today, with software such as EAGLE or KiCAD. This wasn’t the case back when tube radios ruled the airwaves, though – schematics were drawn up by engineering draftsmen by hand. And as with any process with a human element, they didn’t always get it right.

I’m working on a 1934 Philco 66. It came to me in excellent original condition with little evidence of having been service, and throughout the process, I’d been relying on the schematics to guide me in the right direction. Unfortunately, along with a laundry list of other issues, my reliance on the schematic to be “the truth” led me around in circles longer than I needed to be to resolve a power supply problem.

Below is a schematic snippet of the power supply and audio sections of the 1934 Philco 66, with the RF chain to the left of the #75 Detector/1st Amplifier tube hidden for simplicity’s sake. 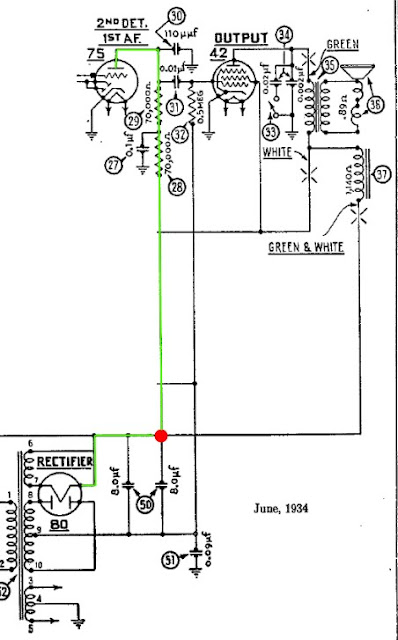 It’s not done yet, but I’m inclined to believe the final wiring issue has been corrected, and it’s on to performance.