I’ve just returned from Whistler, BC  for the season-ending weekend on the downhill mountain bike park, and wanted to track my progress using Google’s free My Tracks application which records your GPS position on the map for review later. I’ve used it successfully many times to keep track of my biking stats and see my trail runs, but it seems to have had some trouble up in the mountains of Canada. 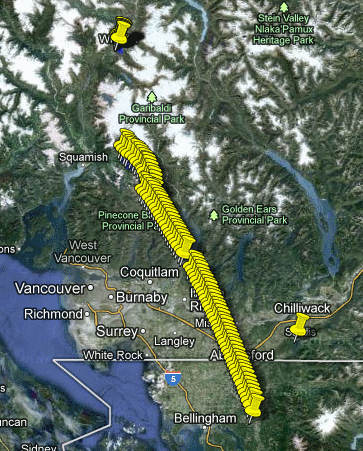 At the very top are the markers indicating where I actually was. All the other pins were recorded at the same time, but seem to have no particular relationship to anywhere I was at any time during the trip. Since Canadians have almost third world Internet, I kept data off to avoid $10/MB roaming charges. Android GPS devices receive some amount of GPS assistance from towers setting up, so this lack of a cell connection may have resulted in the unit using bad GPS data. Or, it was just a weird bug – it’s impossible to tell. The weather was perfectly clear and we were on exposed mountain faces, so there shouldn’t have been an interference or coverage issue.

I was quite impressed with the top speed I managed on my bike of 496.0 MPH, and a min-max elevation change greater than the Space Shuttle’s orbit.