A recent random assortment of ideas:

It’s easy to get media content from a computer to a television, but it’s difficult to get any kind of external media back into a computer. I have a fairly involved computer setup at home. My workstation is connected to two 20″ monitors and a 46″ LCD. A friend was in town for the weekend, and we were looking for an easy way to make a YouTube video play from his laptop onto my monitor, without actually taking away my control of it. I have two sets of input devices, one at my desk and one near the couch, to control the computer when it’s being used for media. We ended up just switching off who had control of the single mouse cursor between the two input devices. The ideal solution? Either multiple mouser pointers, assigned to the unique input combinations – or a VGA capture interface to make another computer’s input appear in a window. VGA capture devices exist but are absurdly expensive, and there’s no multi-pointer support in the operating system. Most laptops these days have dropped an analog TV output in favor of HDMI or DisplayPort outputs meaning they can’t be connected to an inexpensive TV-capture card.

At about the six month mark, as expected, my phone has started acting up. This has been the case with most every smartphone I’ve owned – a Nokia running S60, an HTC 8525 running Windows Mobile 6.5, a G1, and now my G2 running Android. Reliably at about the six month mark they’ve all started acting up in ways that make me suspect the hardware is failing: lockups and reboots, screen glitches, data disappearing off the memory card randomly and visible dust between the LCD and the glass so deep in the phone the only way I can see it getting in is via osmosis. Hard reset doesn’t fix the problem. Have even high-end smartphones become disposable commodities?

Hallicrafters 8R40 Upgrade: On the back of my bench I have a Hallicrafters 8R40 radio receiver from 1953. It will be a good performing radio when I’m through fixing it up, and I’ll be using it to try and pick up long distance contacts. One thing about far away faint signals is that they can be tough to hear even with the audio turned all the way up, the 8R40 only has a single-ended 6V6 output that maxes out around 4.5W of audio power into a not-that-efficient speaker.  From Parts-Express, I bought a few Dayton Audio DTA-2 Class T amplifier modules, based on a Tripath TA-2024 chip. They’ll pump out about 20W of power. I’m planning to use one of these modules inside the back of the Hallicrafters to allow it to drive an external speaker at 20W in a reversible modification. I expect I’ll split the detector’s output and use the module amplifier for the external speaker only; leaving the build-in speaker powered by the tube. 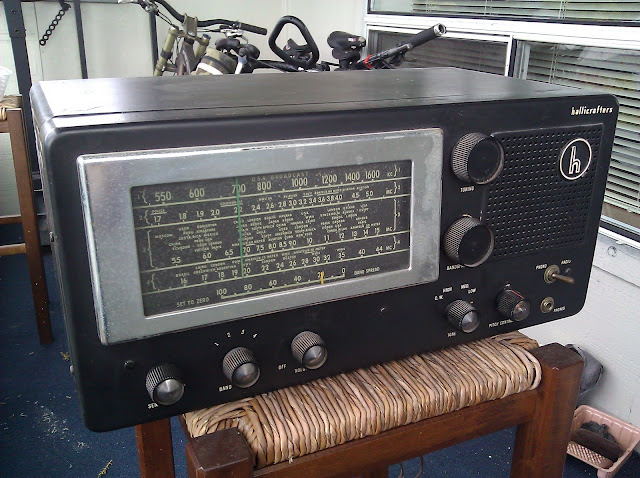