I’ve been scaling my radio collecting back a bit, as I need to work through the backlog of ones I already have, but one caught my eye. It’s a small, 4-tube TRF type “tombstone” radio from the early 1930s – and it’s a complete mystery. 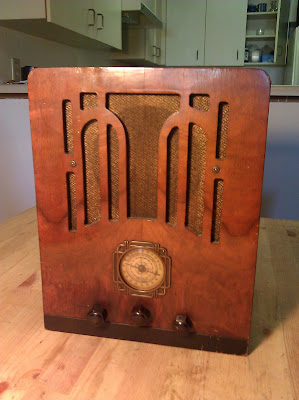 It’s a Chicago “Plant X” radio of some kind; during the ’30s, Chicago was home to many independent radio manufacturers that produced OEM radios for drugstores, music shops, anyone who wanted something privately branded but couldn’t engineer it themselves. They were universally sold without identification, so there’s no schematic available for it. My plan is to trace the circuit and generate a schematic based on it. This is a challenge, though, as software to actually map a schematic is frequently difficult and expensive. I was fortunate to find a free application, KiCad, which does electrical and PCB layout.

KiCad was made for modern electronics and doesn’t come with any vacuum tube symbols built in. Fellow radio enthusiast N9GOD has developed the N9GOD-valves library of  tube symbols and references – but they’re mostly industrial and audio tubes. His library was last updated on 10/26/2008, so it’s clearly not being maintained. I’m taking up maintenance of this library (for my needs anyway) and will be adding tubes as I come to them. Using the application is…painful, and that’s being generous. It’s definitely an open source project written by people who likely had little to no user experience training, but it’ll get the job done.

The first addition is the 6A7 pentagrid converter, the heart of many early to mid 1930s radios which combines the mixer and oscillator superheterodyne functions into a single tube.

The next set of additions to add? The 6D6 IF amplifier, 6C6 RF amplifier, 80 Rectifier, 75 Double Diode-Triode and 42 Output. Those will be enough symbols to work on the earlier radios. I’ll post an updated library when it’s ready.

This entry was posted in Electronics, Projects, Radios and Tubes and tagged 6A7, CAD, Chicago Radios, KiCad, N9GOD, schematics. Bookmark the permalink.